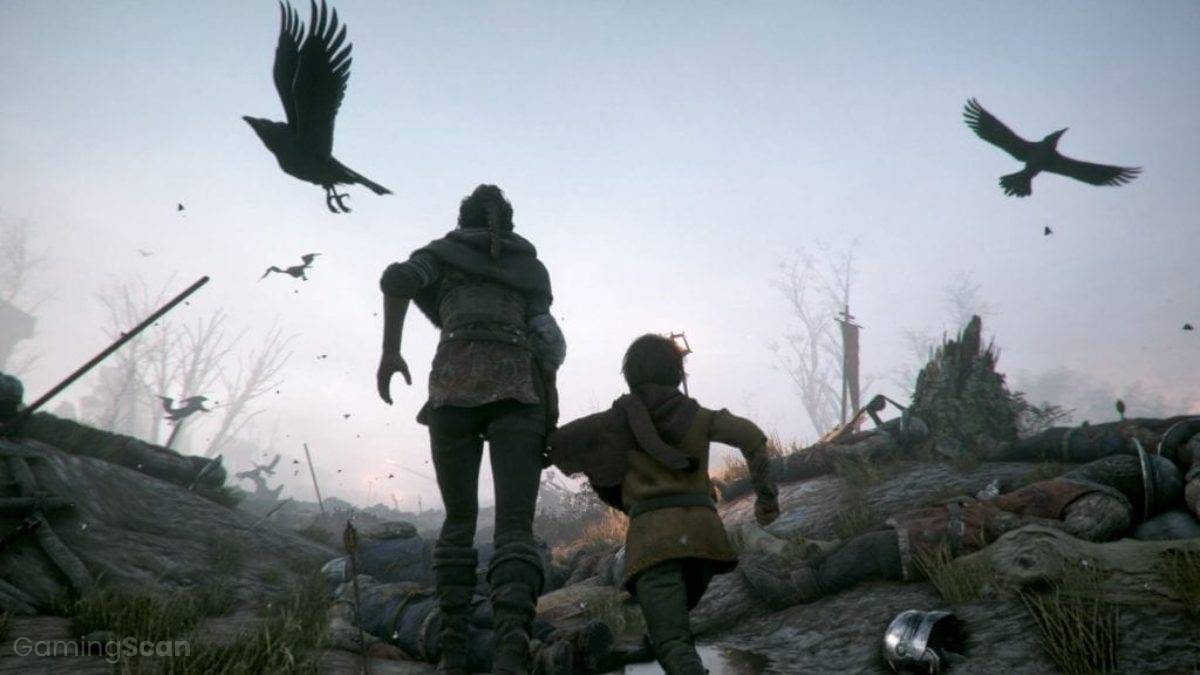 An enchanting and dark tale framed in a wonderfully grim world, beset by hordes of blood-thirsty rats and equally demented clerics, A Plague Tale: Innocence is a compelling story of pervasive death and siblinghood, with a well-balanced smattering of stealth and puzzle-solving as its main gameplay loop.

A Tale About, Well, The Plague & Innocence

With 13th Century southwestern France as its setting, here we have a highly digestible adventure that explores the oft-fraught relationship between siblings, Amicia and Hugo, as they confront obstacles well beyond their habitually sheltered lives.

Born into a privileged family at odds with the life of survival that defines the existence of the peasant populace, Amicia and Hugo are somewhat estranged to one another.

Hugo, blighted by a genetic disease causing headache-induced fits, is very much a product of his overbearing but ultimately loving mother, who dotes on him as she strives to rid him of his lifelong affliction – a central piece of the narrative arc.

Amicia, on the other hand, has hung to her father’s coat-tails – an errant steward of the surrounding Guyenne countryside – and follows in his footsteps as a flawed leader more at ease traipsing through woods and groves with her trusty hunting dog, Lion.

The inquisition swoops in during the opening chapter, murdering their parents and forcing a frantic escape. Rats have invaded the land, infecting the locals with the plague or, for those less fortunate, savagely ripping them to shreds, adding a further threat.

Their adventure begins as they flee in search of an elusive alchemist and an antidote to Hugo’s ailments.

The complexity of this world fraught with plague-carrying rats and foul-mouthed soldiers inexplicably hellbent on finding Amicia and Hugo brings them together.

The two clash throughout as they define the parameters of their relationship, with Hugo often acting out in fits of defiance and tantrums if Amicia dares venture more than a few yards away, but always reconcile during brief moments of tenderness.

Chaperoning Hugo defines most of the seventeen chapters that make up the title. Although he does provide the key to a handful of puzzles by squeezing past obstacles inaccessible to Amicia (and much more in the closing hours of the game), the bulk of the gameplay is about keeping in check his propensity for running head-on into danger.

Unlike Atreus in God of War, who plays a crucial role as a useful sidekick able to stand his ground, Hugo is defenseless, and the game systematically reminds us of this.

At first, Hugo’s flippancy can be frustrating for the player to the point where we start to wonder whether he has a death wish, given his lack of regard for errant guards.

He is, however, acutely aware of the harrowing violence surrounding him – not to speak of its toll on his sister and her equally violent solutions for keeping them alive – and the story delves poetically into that progressive loss of innocence.

As the game wears on, Hugo’s volatility reveals itself for what it is: a calculated creative choice on the part of the developers and one anchored in reality, which anyone who’s weathered a younger sibling or spent time around fractious littluns can attest to with a knowing smile.

The siblings encounter a host of characters along the way from an alchemist’s apprentice, to a brother-sister duo of rough around the edges thieves, Arthur and Melie, and a bullish blacksmith’s son, Rodric.

Throughout the story, it’s hard not to be charmed by these encounters and thankful for the help they provide in equal measure.

Conversely, the contingent of villains is as menacing as it is fascinating, with the highlight being a particularly unsettling segment where Inquisition head, Vitalis, injects himself with Episanguis via a rudimentary syringe and pricks his arm with oozing puncture holes as if he were some Middle Age smack addict.

The closing chapters provide a well-orchestrated shift in the power dynamic leading up to that point. Much about the thrilling conclusion is best experienced first hand to avoid spoiling the surprise. And what a surprise it is.

The puzzles, set pieces, and recurring progression-based environmental problem-solving are sufficiently intriguing and well-designed, but not complicated. Most require a degree of trial and error, but the puzzles remain among the most enjoyable facets throughout the game’s 12-hour or so story.

There’s a lot of fun to be had in figuring out the obstacles A Plague Tale coughs up. From using inflamed sticks to part seas of squirming rats to throwing an alchemist’s concoction to ignite a brazier, unleashing the rats on unwitting guards by extinguishing their lanterns, and downing suspended chunks of meat to attract the rodents.

Amicia’s bag of alchemist skills isn’t extensive, but the concoctions allow one to tackle each puzzle in a variety of ways using fire, distraction, light, and poison.

The crafting system, although rudimentary, promotes tracking down scarce resources as each upgrade produces a tangible improvement that eases the stress of encounters.

The biggest flaw in A Plague Tale: Innocence is by far the stumbly combat mechanics of Amicia’s sling that fall short in head to head combat. Understandably, Asobo has implemented a difficulty barrier to mimic Amicia and Hugo’s frailty.

However, at times this means contending with a guard running straight on results, in a muddled panic, to fire off a rock in the hopes of a headshot rather than a carefully executed combo of commands.

Fortunately, the stealth elements pick up the slack, although they do, at times, fall into the familiar analogy of the genre.

The best example of this is when guards catch a fleeting glimpse of our heroes only to return to their patrol route undeterred moments later. The stealth passages are, however, intelligently designed and encourage experimentation.

Full-blown detection more often than not signals imminent death, and the player quickly adjusts to how unforgiving guards can be if they spot Amicia and Hugo.

There’s an inherent and welcome difficulty to the gameplay. As such, much of the stealth is about studying enemy movement patterns and striking at the opportune moment when their backs are turned, creeping through undetected, or quickly disposing of them one by one.

Asobo does well to provide enough variety with suitable – although a little repetitive – variants of the basic formula.

The world, created by developer Asobo, is beautifully curated and structured. Linear, yes, but strewn with nooks and crannies begging to be explored for collectibles that add additional lore and historical insight.

Graphically, the game is stunning, terrifyingly so with an attention to detail and lighting effects that are usually the reserve of titles with a substantially higher budget.

In a way, the visuals match the dichotomy of the narrative wavering between tenderness and absolute horror. There is no way around it: the game is stunning.

One poignant chapter has the player traipse through a farm in search of an elusive alchemist. It opens with a merry game of hide-and-seek through a pleasant orchard before turning markedly more somber as the carcasses of slaughtered pigs pepper the path leading to the main farmhouse.

In another sequence, we make our way through a battlefield where fallen soldiers all but conceal the muddy ground while a monolithic aqueduct dominates the skies. Death and beauty are everywhere. And, of course, the ever-present rats.

The rats are a feat in themselves, and Asobo’s bespoke engine brings them to life in fluid and staggering vividness. You’ll catch a flick of a tail here, the rapid scurrying of feet there.

They move as one connected unit made up of distinct individual parts most noticeable when cornered into a tight spot or when they flow from dark recesses.

It’s difficult not to feel fussy at times, and therein lies another strength of the game; the ability to instill the player with the same sense of absolute fear as Amicia and her companions.

The lack of glitches or bugs is worth noting. There’s an attention to detail that AAA studios would do well to pay heed to and it’s a welcome gust of fresh air.

A Plague Tale: Innocence’s soundtrack is firmly rooted in the game’s historical inspiration with swelling orchestral pieces on period instruments. The score doesn’t crutch too excessively on established classical motifs, favoring a rich spectrum of sonic textures and paces instead.

The music’s tone follows the narrative flawlessly, wavering between morose and threatening with the odd dip into hope in line with the brief moments of reprieve scattered throughout the game.

The central leitmotif is a particularly emotive piece that swells perfectly at the most climactic points. Overall, the music is aptly suited and excels at immersing the player into the world.

The voice acting is excellent. The unabashedly – and possibly natural – French twang adopted by the English language actors is perfectly executed, avoiding the pitfalls of ridicule while adding considerable authenticity, particularly for Amicia.

NPC dialogue is equally well executed from the snarly guttural Inquisition guards to the cockney British soldiers and their liberal use of expletives.

At times brutal, the threats facing Amicia and Hugo are just as violent as the methods used to dispel them. Watching a band of innocent children reconcile as best they can with this psychological burden is equally hefty.

The death around them is where the title shines brightest. The game manages to capture their vulnerability, while faithfully portraying their resilience.

More importantly, A Plague Tale: Innocence is an enjoyable experience from start to finish and sits firmly among the best this year has to offer so far. Where the game does falter – and this is rarely – the strong narrative provides a steady backbone of intrigue to warrant both an investment of time and price tag.

Asobo has not only managed to bring a novel concept to the table; they’ve done so with aplomb. 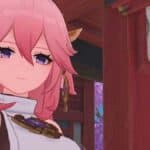