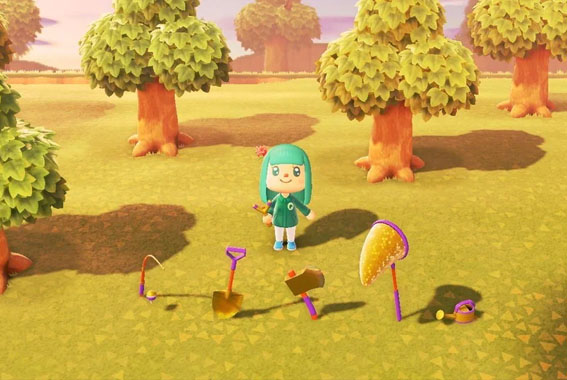 Getting tools in Animal Crossing: New Horizons is different than in previous games where you would simply buy them. Although tools are still available to purchase, it’s much more cost-effective to make them yourself using ACNH‘s new crafting system.

At the start of the game, you can only craft flimsy tools with low durability until you unlock their upgraded versions.

In this guide, we’ll show you how to get every tool, from the very first recipe to the highly-coveted golden tools.

All you’ll need to do is gather a steady stock of crafting materials, earn some Nook Miles, and simply progress through the game.

How To Get Flimsy Fishing Rod And Net

At the start of your first full day in New Horizons, you’ll receive your NookPhone, and Tom Nook will invite you to take his DIY workshop inside the Resident Services tent. Upon accepting his offer, he’ll ask you to deliver five branches.

How To Get Flimsy Axe

Once you have secured the Flimsy Fishing Rod and Flimsy Net, Tom Nook will ask you to show him any fish or bugs you find. After you’ve brought him at least two examples, he’ll give you the recipe for crafting the Flimsy Axe, which can be used to chop trees or strike rocks up to 40 times.

How To Get Flimsy Watering Can

The Flimsy Watering Can recipe can be obtained by bringing Tom Nook four additional examples of local fish and/or bugs. Along with the recipe, Nook will also give you some seeds to plant.

The Watering Can is a useful tool for gardening and essential for getting hybrid flowers to bloom. The Flimsy version can last for up to 20 uses.

How To Get Flimsy Shovel And Vaulting Pole

To get the Flimsy Shovel, you’ll first have to make sure you’ve shown Tom Nook a total of five fish and/or bugs. Afterward, you should receive a call from Blathers requesting you to set aside some land for the island’s museum.

The next day, the museum will open at the location you have selected, and Blathers will be inside. Talk to him, and he’ll give you the recipe for Flimsy Shovel, which can be used to dig up buried items, plant trees, and flowers, and strike rocks up to 40 times.

Blathers will also give you the recipe for the Vaulting Pole, which allows you to cross rivers. It’s one of a few tools with infinite durability, so you’ll never have to worry about crafting more than one.

How To Get Slingshot

The Slingshot recipe can only be obtained by purchasing it from Timmy (and later Nook’s Cranny) for 300 Bells. You can use the Slingshot to pop up to 30 gift balloons before it breaks. There’s no way to upgrade your Slingshot other than crafting a Golden one.

How To Get Ladder

To get the crafting recipe for the Ladder, you’ll have to complete a couple different tasks, including:

After you’re done, Tom Nook will tell you that one of your recipes requires flowers, which grow natively on your island’s cliffs.

It’s at this point he’ll give you the recipe for making a Ladder, which allows you to climb up or down between different elevations. Just like the Vaulting Pole, the Ladder has infinite durability and will never break.

How To Get Pretty Good Tools

To upgrade your Flimsy tools to their much more durable standard versions, you’ll have to have already paid off your moving costs using Nook Miles.

How To Get Golden Tools

Unlocking the Golden version of each tool will require you to hit a couple of different milestones. While Golden Tools have much higher durability than both Flimsy and standard tools, they will still break after roughly 200 uses.

Lastly, to craft a Golden Tool, you’ll need at least one Golden Nugget, which has a rare chance of dropping while striking rocks.