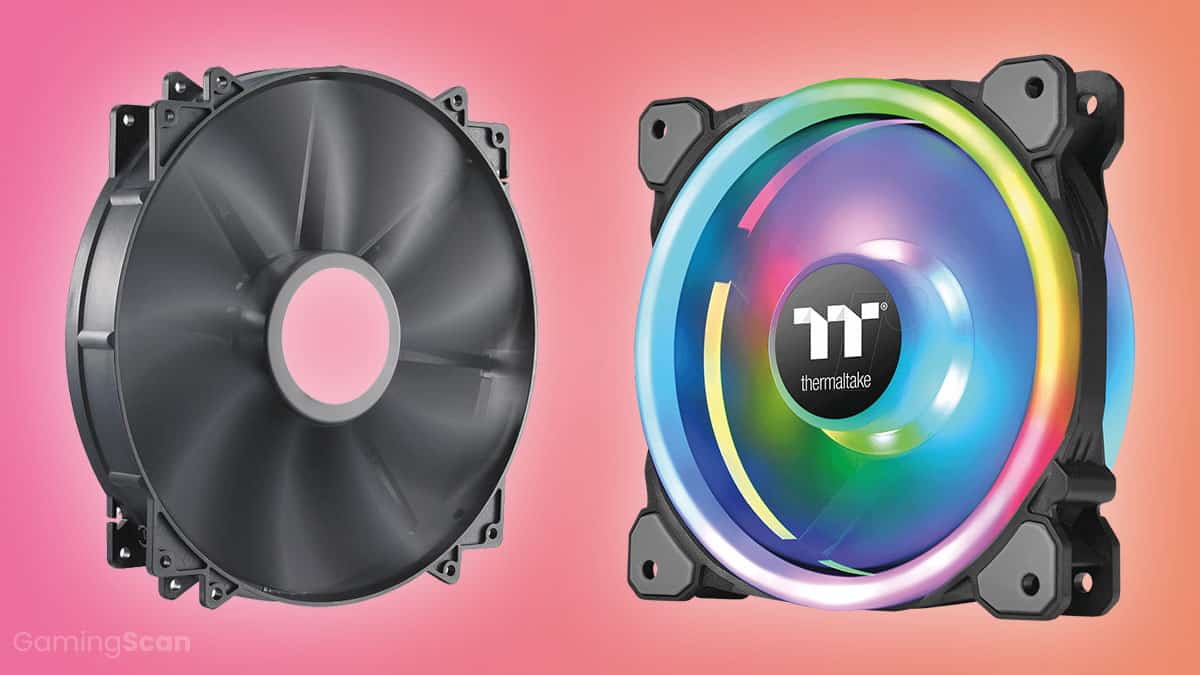 It is true that they weren’t as common back in the day, but with the massive modern graphics cards, it is easy even for the larger computer cases to accumulate a lot of unwanted heat due to poor airflow.

And not only are they practical, but they can also contribute to your PC’s visual appeal with the ever-popular LED lighting.

Ultimately, a little investment in case fans can save you a great deal of trouble in the long run, in addition to having some noticeable instant benefits – especially for those living in warmer climates.

If you want to know what are the best PC case fans for 2022, all you need to do is read on! 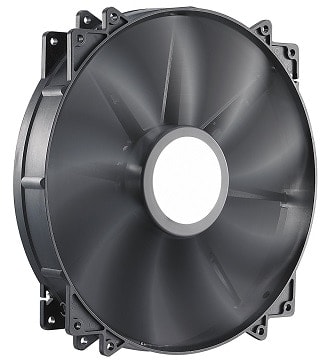 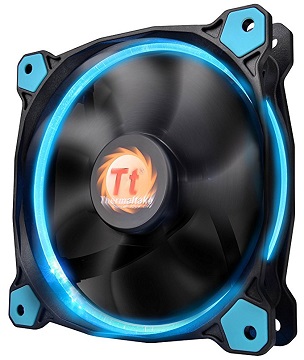 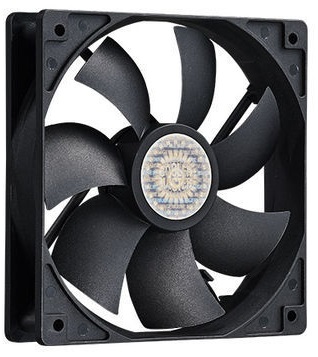 What better way to start a list of case fans than with a product from Cooler Master? The Cooler Master Silent Fan SI2 is a compact and performance-oriented sleeve-bearing case fan that comes in a variety of sizes to suit anyone’s needs.

As the name implies, it is as quiet as modern case fans get with its 19 dBA noise level, and it has a simple matte-black exterior that is relatively average, allowing it to blend easily with almost any setting.

In total, this fan is ideal for users who do not care so much about flashy visuals and just need a quiet and efficient solution to keep their system temperature under control. On the other hand, if you want a fan that not only does its job but also looks good while doing so, the SI2 won’t exactly leave you amazed.

Next up is another Cooler Master fan, the MegaFlow 200, and it is as powerful as its name implies. It is a massive 200mm sleeve-bearing fan with low RPM that is just as quiet as the above described SI2 models.

But unlike the SI2 fans, it also has a degree of aesthetic appeal, as it comes in three variants: the default matte black one, in addition to two transparent models that come either with red or blue LED lighting.

Without a doubt, the MegaFlow 200 is an excellent addition to any case that needs some truly powerful cooling and enhanced airflow. On top of that, the choice between a plain black and two LED models will allow this fan to suit a variety of tastes.

Its only real fault lies in the fact that it only comes with a hefty 200mm diameter, something that will make it incompatible with smaller cases. 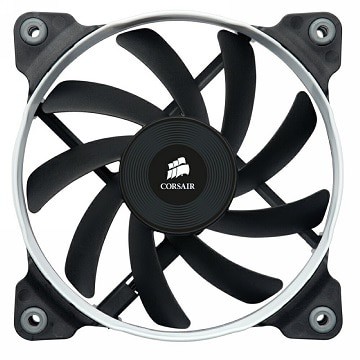 Moving on, we have the Corsair Air Series AF120 Quiet Edition. Much like the previous fans from Cooler Master, this hydraulic-bearing fan is also more oriented towards efficiency rather than visuals.

It is only slightly louder and can be easily adapted to any computer case by replacing the colored ring around the fan. Three such rings come with the fan: a white, a red, and a blue one.

All things considered, the AF120 is a decent fan, although its primary benefit over the rivals is its hydraulic bearing which allows more placement versatility and a longer lifespan.

It has no glaring flaws apart from the fact that it is only slightly louder and more expensive than similar fans, but this is something that’s easily overlooked when the visuals and the high-quality bearing are taken into account. 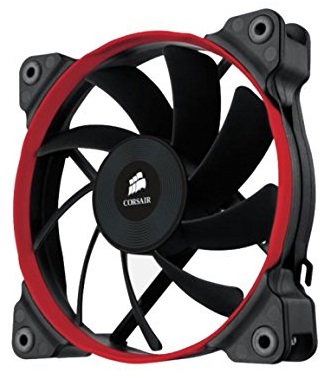 For those who are not as concerned with noise levels as they are with providing their computer case with optimal airflow, Corsair has the Air Series AF120 Performance Edition fans.

These are almost identical to their Quiet Edition siblings, using an advanced hydraulic bearing and coming with the same swappable colored rings. However, where they truly differ is their much higher RPM and the proportionately higher noise level.

With all of the above said, the sole difference between the Quiet and Performance Edition fans is the fan speed and noise levels. Clearly, the latter will be a better choice for demanding, performance-oriented users while the former will suit those who prefer convenience over performance. 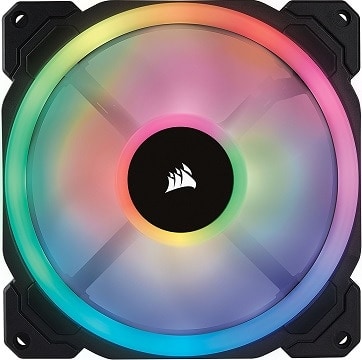 And we have a true premium-quality fan – the Corsair LL Series LL120. One look at these fans and it becomes ultimately clear that they will make any transparent case a sight to behold.

They are also hydraulic-bearing fans who do a remarkable job of finding a good balance between speed and noise levels. However, their most distinguishing feature lies in the fact that they come with fully customizable RGB lighting.

Corsair is selling these fans in dual and triple-packs as well, the latter including a Lightning Node Pro as a bonus, something that RGB enthusiasts will undoubtedly find appealing. Keep that in mind if you’re planning on a bulk purchase.

It is obvious that the LL series fans aren’t just for show, given how well they balance the high RPM with such low noise generation. The hydraulic bearing plays a vital role in that regard but one can’t help but notice the hefty price tag. As you might have guessed, RGB is the primary reason for this.

Needless to say, if you don’t care about RGB or don’t plan on fully utilizing its capabilities, simple LED lighting or no lighting whatsoever would be much more cost-effective. 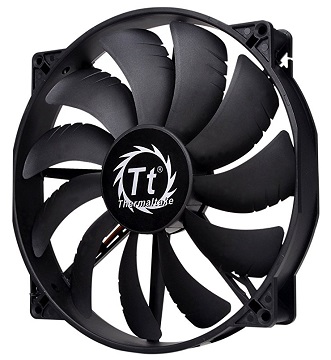 Finally, we get to yet another big name, Thermaltake. And for their first entry, we’re starting big – literally. The Thermaltake Pure 20 fan is a large yet sleek and elegant case fan. The design enables excellent airflow, although it is a tad noisier when compared to some competing models such as the Cooler Master MegaFlow 200.

When it comes to visuals, the Pure 20 fan comes in two variants: a simple matte black exterior or a transparent one complemented with blue LED lighting.

It is evident not only from the specs above but also from Thermaltake’s marketing and the fan’s very design, that this particular model does not sacrifice any efficiency for the sake of convenience.

In contrast, this might put off some users who actually do not require that much power from their case fan and would prefer a quieter one instead. Moreover, while blue lighting is thematically understandable, some users may be left wanting for more variety.

Who says that a fan cannot be fast, quiet, and stylish at the same time? The Thermaltake Riing 12 has got you covered in all three regards – and no, the name is not a typo.

Whereas the Pure 20 model was very efficiency-oriented, the Riing 12 fans come in the more modest and more standardized 120mm and 140mm sizes, they are quieter and allow users to choose their preferred LED color from a rich palette: blue, red, white, yellow, green, or orange.

Without a doubt, the Riing 12 fans do an admirable job of balancing convenience, variety, and efficiency. They are just as good as any other hydraulic-bearing fan, but their distinguishing quality is the ability to blend in with any gaming system thanks to the variety of colors that are available.

Unfortunately, there is no RGB variant for those who are not happy with just one static color. 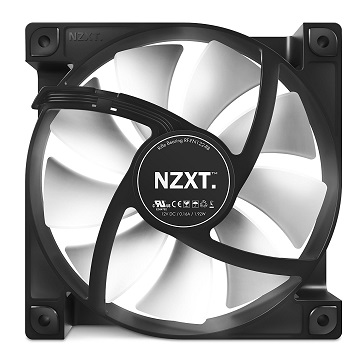 Unlike any of the previous entries, NZXT may not be a name that everyone will recognize immediately. However, anyone who has ever used an NZXT product can anticipate just how well-built the FN V2 fan is.

It is a quiet and efficient fan that boasts a black-and-white design, a great representation of NZXT’s contrast-heavy design philosophy.

There is no denying that the NZXT FN V2 is simply a great deal. It is a highly durable rifle-bearing fan capable of reaching high speeds without producing an excessive amount of noise, all the while being remarkably cheap.

The only problem with it is that, while it will blend seamlessly with a white case, it may easily clash with some others due to the white fan blades. Furthermore, the lack of color variants does not help the matter.

How To Choose The Best Case Fan For You

Let’s start with the most obvious characteristic of a case fan: its size. As you can see in the main table at the beginning of the article, case fans most commonly measure either 120mm, 140mm or 200mm in diameter, although there are other sizes, too.

But what is the best case fan size? While there is no definite answer, we would say: the bigger the better! This is because bigger fans enable better airflow as a result of not having to spin as fast as the smaller fans, which is something that also leads to lower noise levels.

As such, we strongly advise you to go as big as your case allows to make sure that your money is well-spent.

A fan’s speed is measured in revolutions per minute – RPM for short. And the question of whether high RPM or low RPM is better depends entirely on your needs and preferences.

Essentially, low RPM means less noise but also worse airflow. With high RPM, it is the opposite. However, RPM is not a reliable way of estimating just how efficient a fan is, seeing as that depends much more on its size and design.

You can also get some fan controllers to help you manage the speed.

Fans utilize a variety of bearings based on their intended use and price range. Let us quickly go over the types of bearings that you will encounter with case fans:

With all that said, which do we recommend?

The bearing type is not something that you need to overly concern yourself with, but all things considered, we find hydraulic bearings to be the best all-around choice for case fans due to their long life-span and quiet operation.

However, any other type of bearing will do fine, too – just keep in mind that a sleeve-bearing fan might get louder due to wear and tear.

How Many Should You Get?

For most systems, merely one or two fans will be enough to ensure proper airflow.

A single back-mounted fan will push hot air out while a single front-mounted fan will suck cool air in. Apart from that, fans can also be mounted on the top or on the side if the case allows it. However, more than two fans really are overkill for the average gaming PC, unless you’re doing it solely for aesthetic purposes.

If we had to pick the best case fan, it would have to be the Thermaltake Riing 12. It simply has it all – efficiency, low noise generation, and plenty of LED color options to choose from. More importantly, it is all packed into a single affordable package.

But that is only our choice! After all, only you can know which fan will suit your needs best. If you don’t care about visuals and just want a simple and reliable fan, or one that focuses more on raw power, you will not be disappointed by any of the fans we have listed. 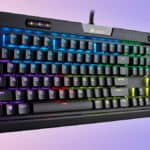