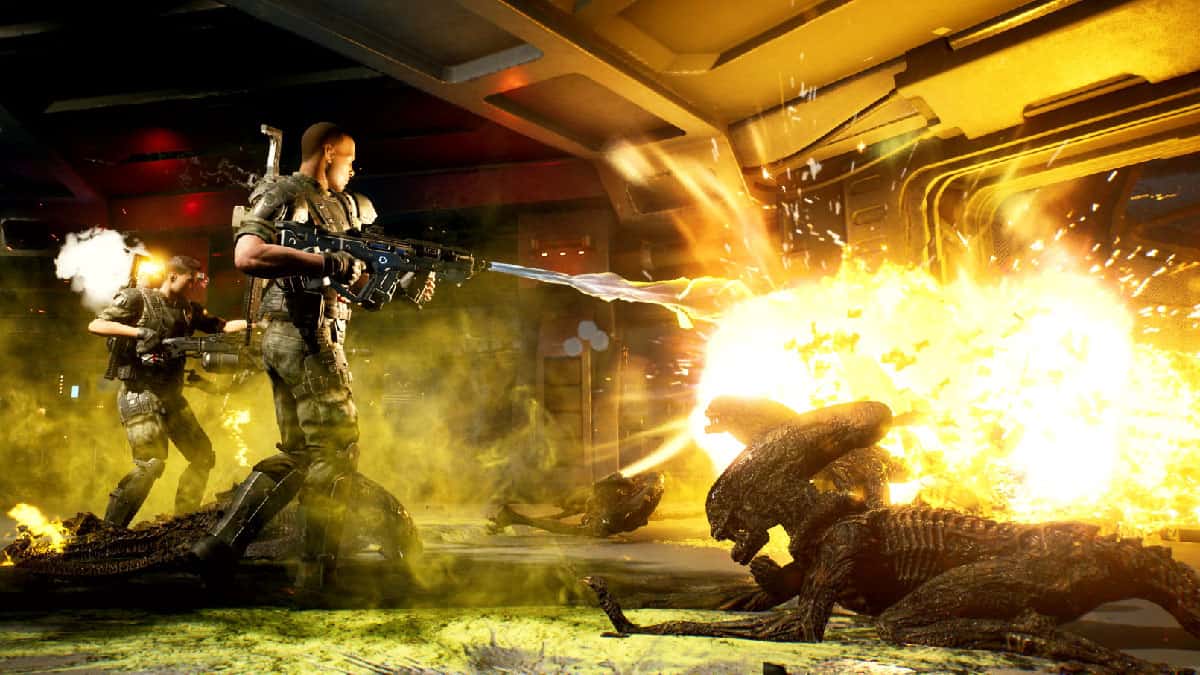 Sometimes we need to take a break from our solo adventures to play the best online co-op games of 2022 with friends.

Whether it’s teaming up to take down a boss, explore strange new lands, or solve challenging puzzles, there’s a co-op game for every kind of gamer.

In this list, we’ll highlight the best online co-op games on Steam, PS4, Xbox One, and Nintendo Switch.

Included is a mix of co-op staples that never go out of fashion, new co-op games, and a few indie gems that may not be on your radar just yet.

In Aliens: Fireteam Elite, three players team up to explore infested space colonies filled with a host of hostile enemies, including androids and Xenomorph aliens.

There are five classes with unique specializations to pick from, and players can unlock additional weapons, abilities, and customizations over time by leveling up throughout the campaign.

From a gameplay perspective, it plays similarly to games like Left 4 Dead or Aliens: Colonial Marines for a more in-franchise comparison.

While the ability to play online with friends is already cool enough, Fireteam Elite would greatly benefit from in-game voice chat and drop-in drop-out co-op.

If there’s one thing the postal industry doesn’t have enough of, it’s birds; no, not air carriers, literal birds with the ability to type up letters and ship packages.

You and a friend take on the role of Jeff and Debra, two adorable kiwis assigned to sort mail, type of letters, ship parcels, and much much more.

This is done by jumping, flapping, pecking, and the crowd-pleaser, butt-slamming your way around highly interactive levels filled with all sorts of levels, bells, and buttons to press.

There are a ton of cute cosmetics you can unlock in the game using stamps you earn from hitting your quota each shift, and various mini-games to keep you entertained.

The LittleBigPlanet series has historically always been a good pick for some wholesome platforming fun and has supported online multiplayer throughout its lifespan.

Players have more customization options for Sackboy than ever before, and the switch from 2.5D to full-on 3D platforming creates room for new abilities, mechanics, and level designs to emerge.

The best part is the entire story can be beaten in co-op with up to four players online, locally, or a mix of the two, with some levels even requiring a certain number of players to complete.

Hazelight Studios continues to push the envelope for modern couch co-op games, first with A Way Out and now with its follow-up, It Takes Two.

From there, the duo embarks on a fantastical journey spanning multiple genre-bending platforming levels, complete with unique challenges and mini-games throughout.

It Takes Two can be played via online split-screen on PC and console, with only one person required to own a copy of the game.

Thankfully, Hazelight Studios is helping carry the torch with games like A Way Out, which casts you and a friend as buddy criminals who escape prison and have to evade the law.

Each of the two main characters has unique motivations and traits that can help or hinder their progress and sometimes create drama between the pair.

When you’re not fleeing authorities in highly cinematic set-pieces, you can hangout and play board games and cards.

Every once in a while, an indie game manages to take the world by storm, even if the success ends up being relatively short-lived.

While that may or may not end up being the case for Phasmophobia, it’s still too early to tell which direction Kinetic Games plans to take the Early Access game in.

Presented as an online co-op ghost hunt, it sees you and your friends investigating haunted houses filled with various spirits, demons, and otherwordly monsters.

Each paranormal entity requires specific combinations of tools and techniques before they can be communicated with or removed, so you’ll have to strategize with your team.

Portal 2 is bound to come up anytime we’re discussing the best co-op games on Steam, considering the role it played in kicking off a new generation of co-op puzzle-platformers.

Set within the Half-Life universe, both Portal and Portal 2 center on a woman named Chell as she’s forced to complete a series of tests at the behest of an evil AI called GLaDOS.

What makes these games so great is the functionality of the portal gun, which allows the wielder to create human-sized wormholes that act as a bridge between two flat surfaces.

While the original is good in its own right, Portal 2 improves upon the formula with additional puzzle elements and a new cooperative mode.

The best kinds of co-op games are the ones that come up with fresh and innovative ways to encourage players to work together.

Such is the case in Biped, a two-player action-adventure puzzle game created in the same vein as games like Portal.

It sees you controlling adorable bipedal robots that can only move a single leg at a time; this leads to some fascinating puzzle designs down the road that require strategy and coordination.

As an added bonus, Biped’s levels feature coins that you and your teammate can collect and spend on cute hats for your robots.

The Trine series of co-op puzzle platformers are among the best the genre has to offer, especially the original and its sequel Trine 2.

After that, the developers took a sort of weird turn and decided to make the game 3D, which didn’t go over well with fans.

Thankfully, they went back to the original 2.5D perspective for Trine 4: The Nightmare Prince, resulting in a return to form for the series.

Designed to be played both solo and cooperatively, the series chronicles the many adventures of three magical heroes: Amadeus the Wizard, Pontius the Knight, and Zoya the Thief.

Borderlands 3 is the latest installment of the over-the-top first-person looter shooter and maintains the ability to play cooperative with friends online and locally.

It’s the perfect kind of mindless action game fun for hanging out with friends in a call and demands little to no communication.

Set seven years after the events of Borderlands 2, the game sees you returning to the barren wasteland of Pandora, home to a host of eccentric and charismatic bad guys.

It introduces new mission types, weapon mods, and loot adjustments that build off of the previous games while addressing the issues with difficulty scaling found in previous entries.

Cuphead is inspired by challenging retro run-and-gun titles where memorizing enemy attack patterns were less of a strategy and more of a necessity for survival.

What’s more, this action-platformer does an excellent job of luring you into a false sense of security with its joyful 1930s hand-drawn cartoon visuals before revealing its true sadistic nature.

In it, you take on the role of Cuphead, who, along with his brother Mugman, is forced to defeat a series of bosses to repay an outstanding debt with the devil.

These long battles put you and your teammate’s platforming skills to the ultimate test, with environments that continuously shift and bosses who become more aggressive as time goes on.

The Division 2 is a culmination of everything developer Massive Entertainment has learned from player feedback regarding the first game and contained a lot more content at launch than the original.

The game is set in Washington D.C. seven months after the events of The Division and sees your character caught in the middle of a civil war between survivors and deadly enemy factions.

Players team up online with a squad of four and explore dynamic environments brimming with increasingly powerful enemies and loot.

The game’s PvP component has been reworked to now include multiple ‘Dark Zones’ where players can face-off against one another to earn better rewards.

Although GTA games have included online multiplayer in the past, none have offered the same breadth of content as GTA 5.

Separate from the game’s single-player story, GTA Online features an array of criminal activities that allow players to work together (or against one another) to earn cash and cause mayhem.

Chief among these are the Heists, which have a squad of players completing elaborate missions with multiple parts.

These challenging operations require hours of planning and coordination but can yield some of the best rewards for teams who can communicate effectively.

Overcooked 2 is an arcade-inspired cooking sim that sees teams of up to 4-players coordinating to prepare and cook food orders in kitchens with ridiculous layouts.

Levels are filled with multiple stations designated for different tasks like chopping, frying, boiling, and plating, and become increasingly difficult to perform as orders stack up and environmental hazards come into play.

The sequel introduces the ability to throw ingredients at your fellow chefs from far away, which will either be a benefit or total disaster, depending on your teammates.

The game is brilliant in that it supports both local and online multiplayer, making it easy to team-up with friends.

Monster Hunter: World streamlines many of the creature slaying franchise’s features to appeal to a larger audience.

While it may not always deliver on this promise when it comes to its antiquated online matchmaking systems, once you and your mates assemble, everything else is smooth sailing.

Quests can be completed with up to four players, and they scale in difficulty depending on how many players are in a squad.

Deep Rock Galactic is an online co-op shooter in which teams of up to 4-players control foul-mouthed dwarves tasked with completing contracts for an intergalactic mining company.

Missions are focused on exploring diverse underground biomes filled with hostile creatures while collecting valuable resources that can be used for upgrading equipment and acquiring new skills.

The game features four character classes—Driller, Engineer, Gunner, and Scout, with each specializing in a different field.

Indie developer Ghost Ship Games has been supporting the game ever since its release, frequently adding new maps, enemy types, and timed events for players to check out.

By now, pretty much everyone is familiar with Minecraft’s premise: break blocks and use them to construct tools, weapons, food, decorative items, just about anything you can imagine.

While the game is already pretty enjoyable as a solo endeavor, meeting up with a friend in the same server offers even more opportunities for emergent play as the two of you carve out your journeys.

The survival sandbox’s appeal is made even better by messing around with mods, which can drastically change the experience visually and gameplay-wise.

Flexible in-game goals, a nice soundtrack, and addictive gameplay make it one of the best and most relaxing co-op experiences present. 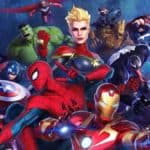