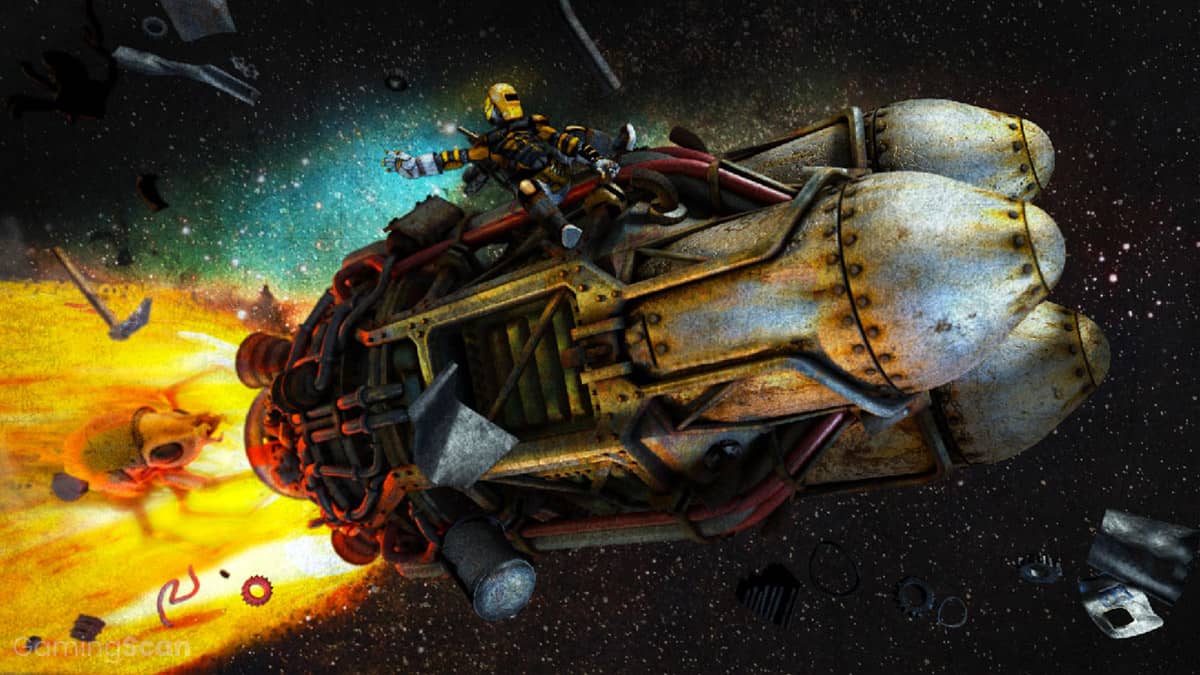 As far as simulation games go, Factorio has one of the best gameplay loops that rewards you for managing resources, exploring biomes, and flexing your creative muscles.

It also happens to be one of the most mod-friendly PC games around, allowing players to add new tech trees, biomes, and features that can completely change the game.

In this list, we’ll highlight the best Factorio mods that add new content to keep your automation adventures going for years to come.

With that out of the way, here are the top Factorio mods you should use in 2023!

How To Install Factorio Mods

Adding mods to Factorio works a little differently than most games that rely on Steam Workshop.

Instead, the game uses a dedicated mod website called the Mod Portal where players can share and download mods while inside the game or on a web browser.

To access Mod Portal inside of Factorio, select the “Mods” option in the game’s main menu and click “Install” to display a list of currently available mods.

From here, you can browse through each one and automatically download and install them (this menu is also used to disable and enable mods you previously installed).

Since the information available for each mod is limited within the game, it may be better to access Mod Portal using a web browser to see a more detailed breakdown.

Mods can also be manually downloaded in the form of .zip files from the Mod Portal website (this method requires you to copy the zipped file into the mods directory without unzipping it).

The file path location for Factorio mods will vary based on your operating system:

To ensure the mod was installed correctly, start up the game, and check to see if the mod in question shows up on the “Mods” page in the main menu. 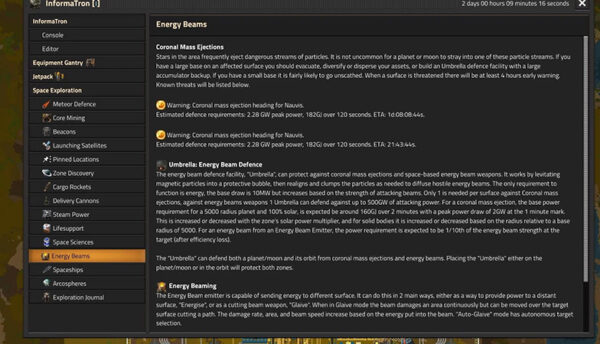 This mod adds a helpful information directory that serves as your guide to the galaxy, detailing the steps and instructions for getting each mod up and running.

Anyone who’s had to minimize a game to refer to a completely separate web page will know just how valuable a tool like this can be. 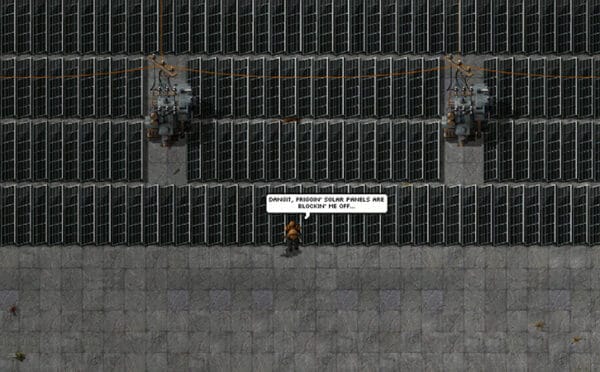 Something that becomes more annoying the longer you play Factorio is the sheer number of objects that can block your character’s path.

To address this, modders have come up with a solution in the form of Squeak Through, a mod that lets you conveniently slip between structures.

Once installed, objects like solar panels, pipes, steam engines, mining drills, and chests can no longer obstruct your movement. 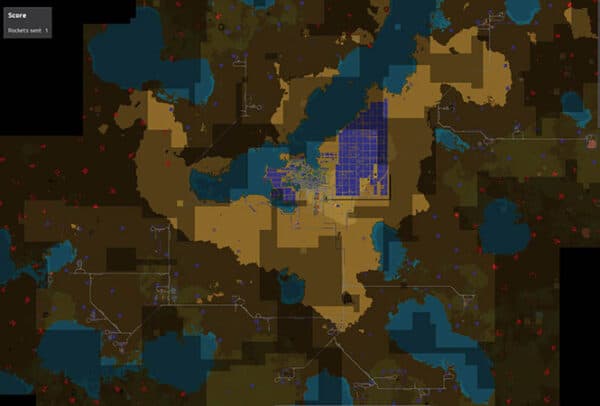 If you’d like better incentives for exploring far away from your home base, Resource Spawner Overhaul is the perfect mod for you.

This is because it changes the spawning system to account for different regions, resulting in more resource diversity and overall better drops.

In turn, this encourages you to venture out into the world and explore without feeling penalized or at any sort of disadvantage. 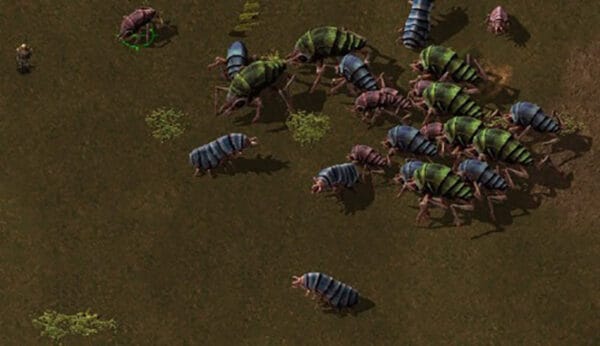 While combat is far from being the main focus of Factorio, it can definitely stand to improve beyond its simplistic design.

For those looking for a bit more bite, we recommend installing Combat Mechanics Overhaul, a mod that increases the level of action in Factorio’s combat.

This is done by introducing several new mechanics that affect projectiles and immunity to certain effects while battling enemies. 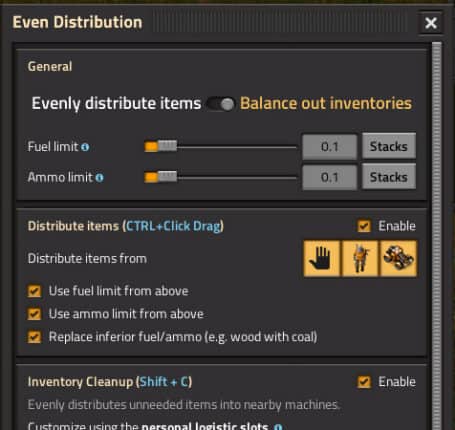 Anyone who’s tried spreading items across multiple buildings in Factorio will know just how inconsistent this system can be.

However, with the Even Distribution mod, this frustration becomes a thing of the past as you’re now able to select multiple structures to divvy up your resources accordingly.

Much better than having to go through and painstakingly set the number of resources for each building individually. 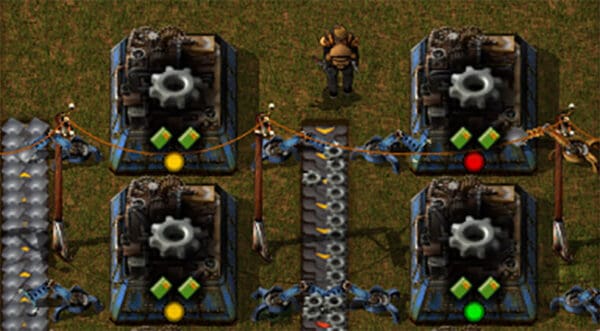 Another common annoyance in Factorio is having your entire production come to a sudden stop when one of your machines malfunctions.

Instead of investigating which one is the culprit, why not use a mod like Bottleneck to get straight to the root of the problem?

Once installed, this mod will add an indicator light to assembling machines, furnaces, mining drills, pump jacks, and chemical plants so you can see exactly where the issue lies. 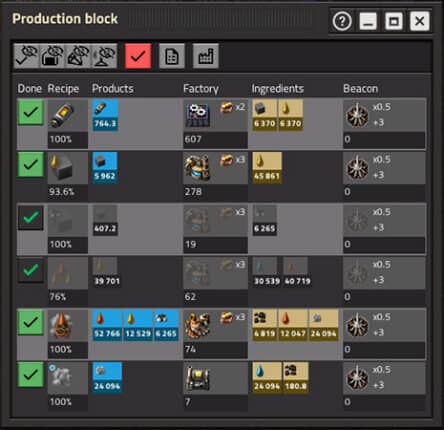 Helmod is one of the best Factorio mods for beginners as it lightens the onboarding load that’s all too common in resource management sims.

This is achieved using a virtual assistant that keeps track of all the metrics of your base as well as reminders for any important requirements.

Although the mod could stand to include its own tutorial, it does offer useful tips that will come in handy for new players. 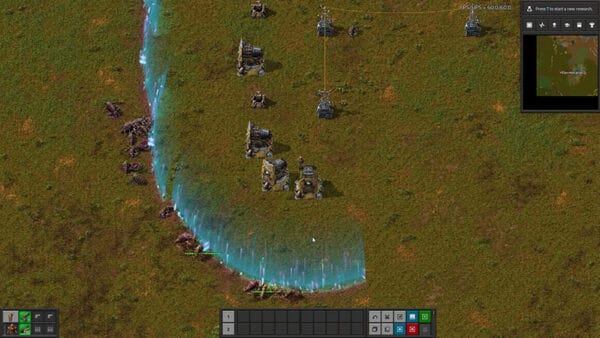 Add A Shield To Your Base

Life on Factorio’s planets can be particularly brutal, especially at the start when players have far fewer resources to work with.

For some peace of mind, we suggest using a mod like Shield Projector to make sure your bases are properly protected.

This mod provides you with an extra layer of security in the form of an arc energy shield wall with minimal energy requirements. 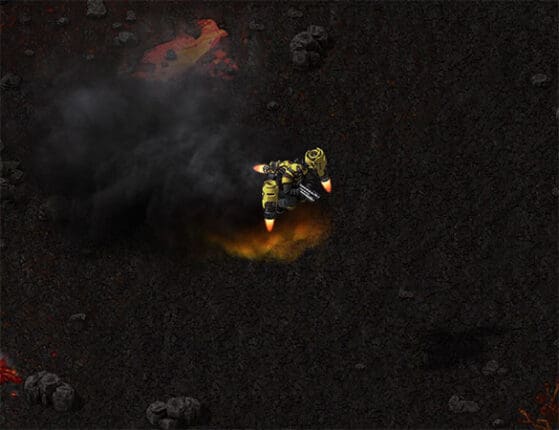 Give Yourself A Jetpack

It goes without saying that every game is improved with jetpacks as they allow you to explore new areas and are generally cool to use.

The Jetpack mod for Factorio is no exception as it lets you build a new piece of equipment that will have you rocketing at high speeds in no time.

Doing so gives you the ability to fly over buildings, water, and anywhere else you set your sights on in the game. 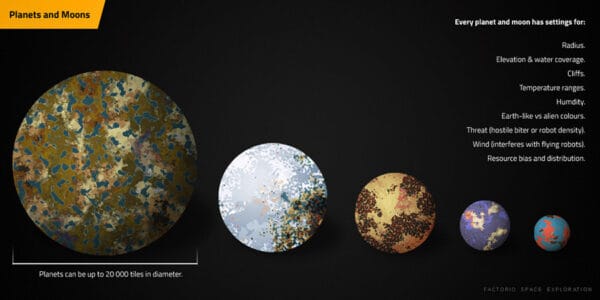 If you’ve grown tired of the same alien surface, it might be time to try out one of the best Factorio mods with space exploration.

With that comes a host of new tech trees, equipment, and activities such as spacewalking that breathe new life into Factorio’s gameplay. 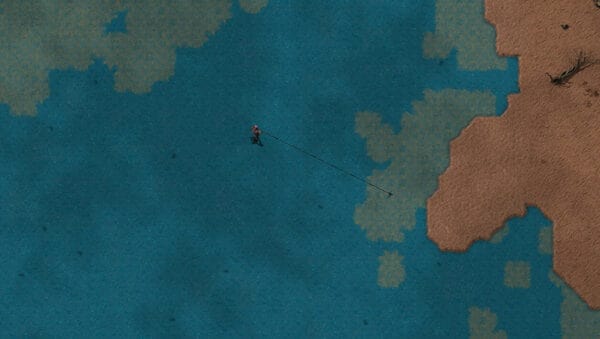 Give Yourself A Grappling Gun

Grappling guns are another cool video game gadget that we wish came included with more games.

Thankfully, this rappelling tool can now be leveraged in Factorio by installing the Grappling Gun mod, which allows you to latch onto and pull your character to a chosen location.

This is useful for jumping over buildings, crossing water, and recovering from an otherwise lethal fall off your space station while using the Space Exploration mod. 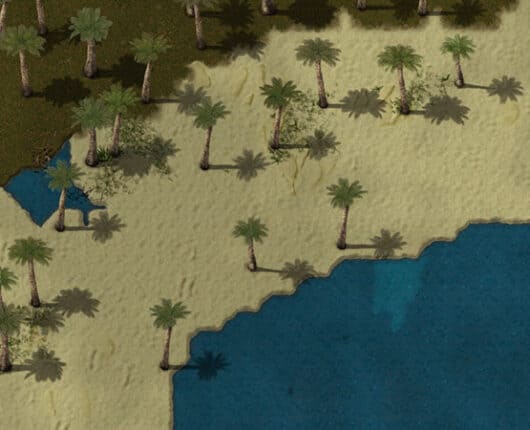 It features a collection of unique new biomes with snowy, sandy, grassy, and volcanic environments for you to explore.

Each one introduces new trees, plants, and other decorative elements that go a long way toward spicing up Factorio’s visual flavor. 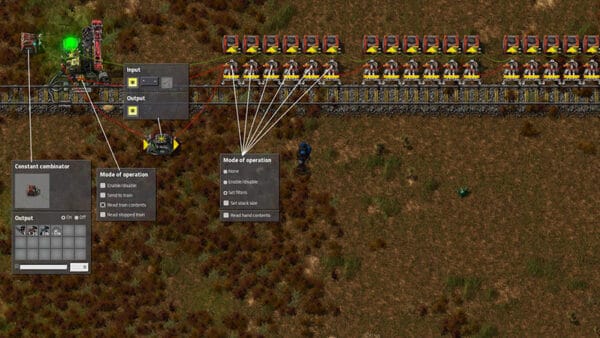 The ability to place trains all over Factorio’s world is extremely useful for maintaining production.

However, with the Logistic Train Network mod, you can take the effectiveness of these locomotives even further by adding anchor points for each train.

Once in place, this creates a fully automated network that will automatically assign the best train for a job at hand, allowing your factory to run as efficiently as possible. 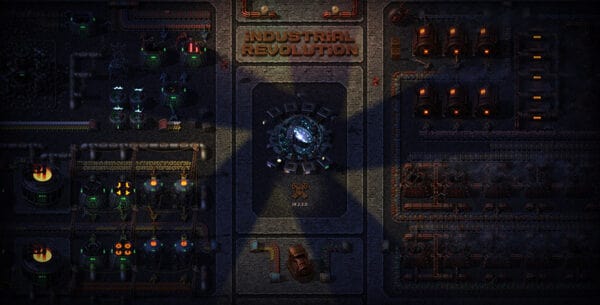 Considered one of the best Factorio overhaul mods, Industrial Revolution 2 gives you a ton of new buildings, research, toys, and mechanics to mess around with.

Additionally, it expands upon Factorio’s crafting system to better emphasize material progression as players must “master” a certain resource before moving on.

This leads to a more methodical, slower-paced version of Factorio that encourages you to take your time and carefully plan out each factory. 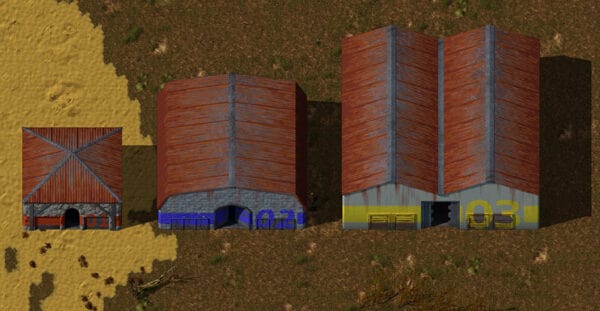 If you’re looking to up the amount of immersion in Factorio, might we suggest using a mod like Factorissimo 2?

The point of this mod is to add physical factory buildings that house all of your machines and equipment, with multiple sizes to pick from.

Being able to physically walk inside your factories is such a fun concept that helps flesh out the game world and bring it to life. 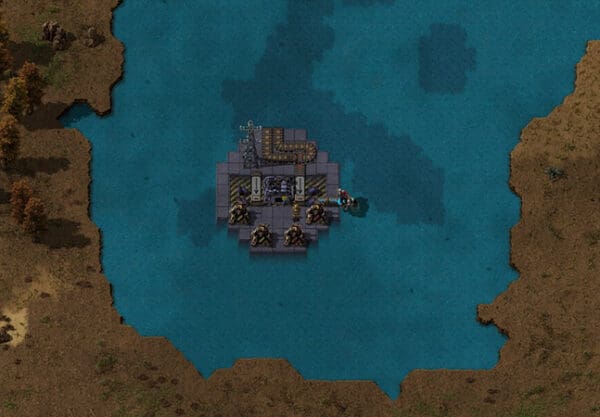 Another one of the best Factorio mods for overhauling the game is Warptorio2, which turns Factorio into a glorified tower defense game.

This is achieved by restricting your building to only small platforms that get periodically attacked by enemies as you try to stockpile resources.

As such, you’ll be fighting a constant battle to harvest and maintain enough resources to keep your operation going while fending off waves of enemies. 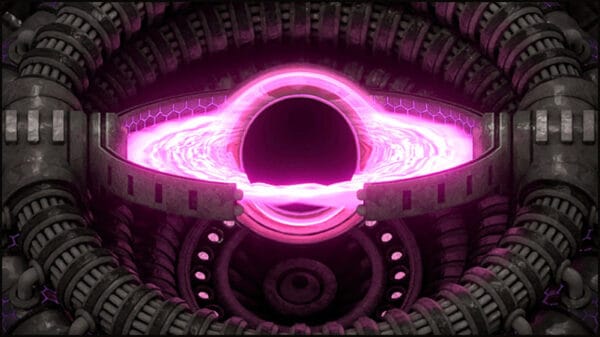 Checking both boxes for best Factorio mods for beginners as well as overhauling the game, Krastorio 2 completely reimagines Factorio’s endgame.

This includes a slew of changes affecting combat and fuel usage along with new technologies, resources, buildings, weapons, and radioactive mechanics.

It’s great for players looking to complicate and diversify vanilla Factorio without ramping up the difficulty too much. 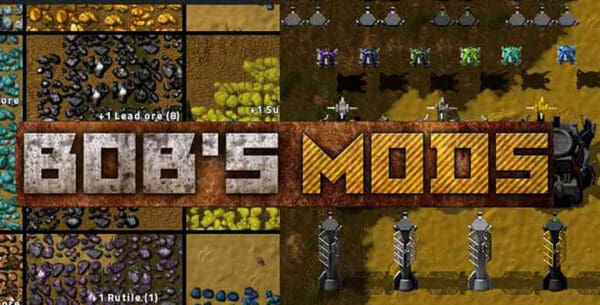 By this point, Bob’s Mods has become the standard for Factorio modding and in many ways, is the definitive way to play the game.

Rather than a single mod, this is a collection of multiple mods that bring an exhaustive number of improvements and features to the table.

These range from new tech, weapons, and enemies to restructuring recipes, adding character classes, and other useful functions that mesh well with other mods on this list. 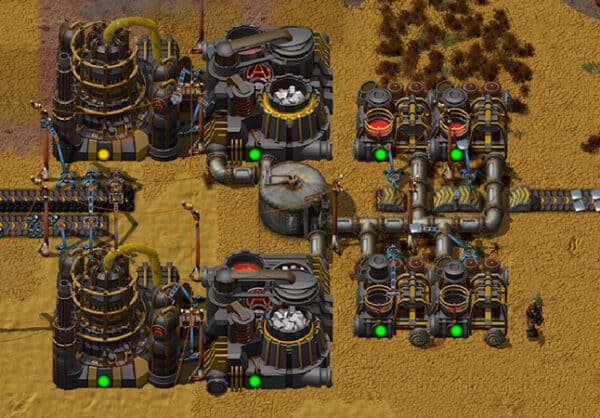 Much like Bob’s Mods, Angel’s Mods is a Factorio mod collection that comes well-regarded by the game’s community.

It bundles together a bunch of useful mods designed to tweak gameplay at a systems level and streamline tasks like smelting, ore refining, and processing petrochemicals.

On top of that, it introduces new storage and transit options to ensure you have everything you need to create the factory of your dreams. 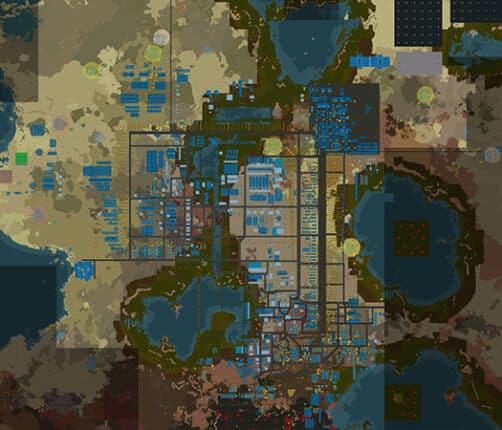 Play The Prequel To Factorio

Serving as a prequel to the events of Factorio, Nullius is one of the best Factorio overhaul mods that tasks you with terraforming planets and seeding them with life.

Your biggest obstacle is overcoming the lack of life as well as resources like coal, oil, wood, and oxygen by seeking out renewable sources of energy.

To help out, the mod swaps out all of the vanilla game’s recipes and technology in favor of ones revolving around common minerals found in the air and seas as well as rare asteroids. 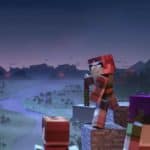