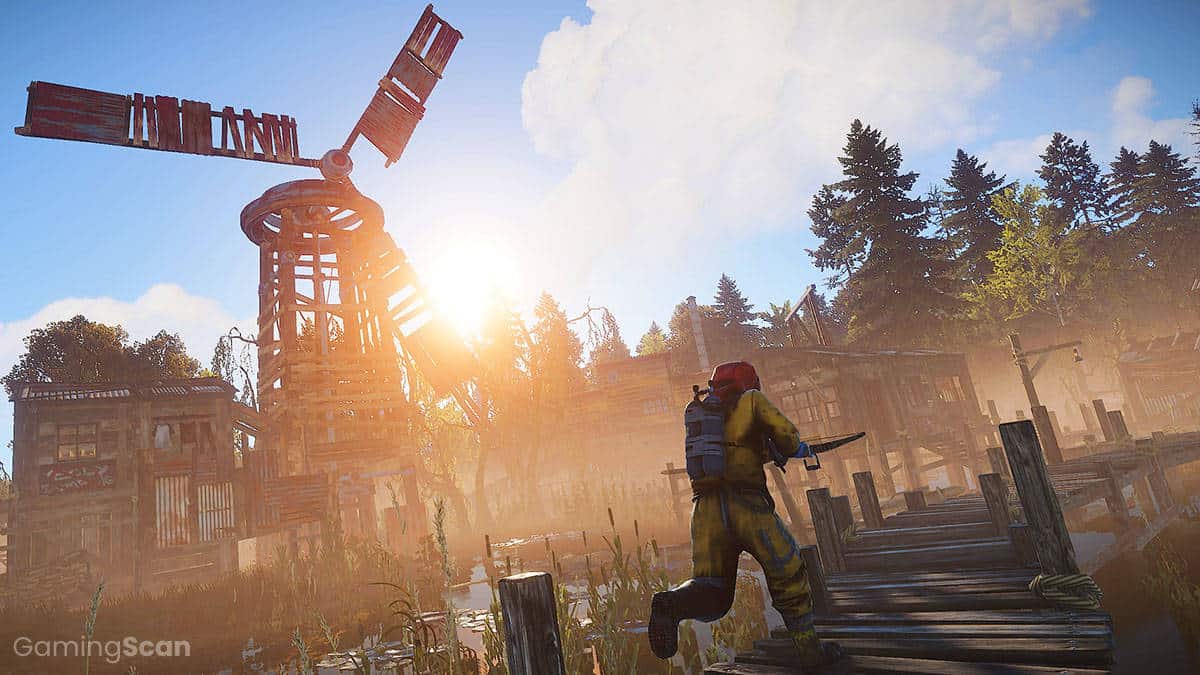 Rust­­­­ is a hardcore survival game developed by Facepunch Studios in which players spawn into an unforgiving open world as vulnerable “nakeds,” with nothing but a rock to their name.

From there, it’s a never-ending battle to scavenge resources, rob enemy players, and hoard your wealth until a formidable opponent comes along.

We’ll be updating this list in the future with new titles, so make sure to check back and let us know if we missed any of your favorite games similar to Rust!

Our first recommendation to Rust fans is the Viking-themed survival game Valheim, which released exclusively for PC in February 2021.

In it, you play as one of Odin’s fallen warriors whose soul ends up in the tenth Norse world and must try to survive by gathering resources, building shelter, and exploring various biomes.

The game features RPG-style progression as well as unique building mechanics that allow you to construct your own Viking longhouses and fill them with all sorts of furniture and defenses.

While it places a bigger emphasis on co-op and PvE combat than Rust, both games offer a steep difficulty curve to overcome, especially in the early game.

Although it may look like a child’s game, Grounded has some pretty in-depth survival mechanics that can make for a challenging and unpredictable experience similar to Rust.

In it, you take control of a kid who accidentally gets shrunk down to the size of an ant after a failed science experiment.

Forced to try and survive in your own backyard, you’ll have to navigate tricky environments and keep a watchful eye for aggressive bugs such as spiders and ants.

Similar to Rust, one of your main objectives when getting started is to find a safe place to rest your head at night, a feat that’s easier said than done.

Speaking of perilous settings, Subnautica: Below Zero is an open-world survival game and follow-up to the original that sees you returning to Planet 4546B, an alien world covered almost entirely in water.

At the start, your character stumbles upon an icy region on the surface and sets out to uncover its mysteries while harnessing natural resources to craft and expand bases, submersibles, and tools.

Like Rust, the game has an open-ended design that lets you set goals for yourself while exploring the deepest corners of the ocean and encountering an assortment of hostile wildlife.

Though it’s lacking any PvP or even multiplayer, you’ll find it has a similarly high learning curve and can be made even harder by upping the difficulty level.

7 Days to Die is a zombie survival horror game that was originally released in Steam Early Access in 2013 and has been worked on ever since by developer The Fun Pimps.

Though some fans might be anxious for updates to speed up, anyone coming from Rust will have a ton of fun and new content to explore in 7 Days’ current state.

Gameplay combines elements of tower defense, RPG, and sandbox survival games with an emphasis on crafting tools and building shelter.

There’s also online PvP, though the main source of combat comes from zombie hordes that become increasingly harder to deal with the further you progress.

If you’re looking for a single-player survival game that will take as much time to master as Rust, then The Long Dark is a good alternative.

Set during a harsh Canadian winter, it casts you as a bush pilot whose plane crashes on a huge yet remote island.

To survive, you’ll have to venture out and find the rest of your party while braving a frozen wilderness designed to destroy you.

Like Rust, the game focuses on managing various systems such as fatigue, hunger, and thirst along with combating hostile wildlife, namely wolves.

Next up is Stranded Deep, an open-world survival game that has you taking on the role of a character who survives a deadly plane crash in the middle of the Pacific Ocean.

Fighting for survival, you’ll have to scavenge any resources you can find on small islands and abandoned shipwrecks while making sure to avoid sea monsters.

Each world in Stranded Deep is procedurally generated, meaning no two are alike; however, you’ll have no shortage of interesting locations to explore, including reefs, islands, and underwater trenches.

Similar to Rust, you’re tasked with maintaining your character’s hunger and thirst as you gather materials and craft various rafts, bases, tools, and more.

Mist is another single-player sandbox survival game in which players attempt to survive in a world plagued by zombies.

It features a robust building/crafting system that allows you to fortify bases to prevent enemies from getting inside as well as sprawling environments to explore.

There are also unique in-game events such as dense mist shrouding the entire map and making the infected more aggressive, forcing you to adapt to survive.

And just like in Rust, you can harness energy from generators and other electrical appliances to power your own machines.

Anyone who’s played Rust will likely be familiar with DayZ, yet another survival game that incorporates zombies as well as PvP combat.

Some would argue it’s actually a lot more challenging than Rust due to the addition of undead enemies who are prone to attack when they hear noise.

This can add an extra layer of tension to shootouts with other players as you constantly have to scavenge for any supplies you can get your hands on.

Lastly, there are some great mods out there for DayZ that can help keep the game feeling fresh and bring the experience a lot closer to a game like Rust.

Next is Green Hell, a first-person survival crafting game that sees you navigating a nightmarish Amazonian rainforest ripe with danger and horror.

Instead of competing with other players for drops like in Rust, you’ll have to deal with the rainforest’s native tribes who aren’t too welcoming of outsiders.

The only way to survive is to craft weapons and construct a shelter from the surrounding resources while hunting for your next meal.

Similar to Rust, Green Hell encourages curiosity and risk-taking by rewarding you with extra materials, upgrades, and lore for exploring new areas.

Despite having less realistic-looking graphics, Minecraft is an excellent alternative to Rust that has benefited from years of updates and refinements.

What’s more, it’s extremely flexible in terms of gameplay, allowing you to focus on building, exploring, PvP combat, and more by playing on modded servers.

Some servers take things even further by having full-fledged factions that will wage war with each other, not unlike Rust’s intense clan battles.

However, by default, your goal is to simply survive the game’s hostile world while exploring various villages, temples, and mines in search of natural resources.

The Forest is another popular open-world survival game that takes place on a remote island filled with an assortment of terrors, namely grotesque cannibalistic mutants.

You play as a father whose son is kidnapped after their plane crash-lands and must overcome every obstacle or challenge the island throws his way.

This includes building shelter, crafting makeshift tools, and arming yourself with weapons to ward off potential threats as you search for your son.

Similar to games like Rust, The Forest features a flexible crafting system that lets you construct bases wherever and however you want.

Another sandbox survival game that needs no introduction is Ark: Survival Evolved, which mirrors many of the same gameplay elements as Rust.

In it, you set out to explore a huge map dominated by futuristic technology and dinosaurs that can be hunted or tamed as pets that will provide you with transportation, extra storage, and protection.

There are also various resources to gather, such as wood and stone, that let you build simple huts before moving on to more advanced materials.

Like Rust, Ark’s world is filled with numerous threats such as giant megalodon sharks, anglerfish, manta rays, and of course, other players.

Raft is another co-op-driven survival game that takes place in a never-ending ocean where you and your friends will have to work together to stay alive.

You start with a small raft that’s effectively a few planks of wood and a metal hook attached to a rope that can be used to reel in junk and other objects in the water.

Similar to Rust, the game allows you to set your own goals and combine crafting materials gathered to create new furniture, tools, weapons, and power sources.

The challenge comes from trying to maintain and expand your mobile base while being hunted by a hungry shark that’s prone to biting off chunks of your raft.

Going from never-ending oceans to literal galaxies, No Man’s Sky is a space-faring survival game that drops you in a massive sandbox infinitely larger than any Rust map.

Gameplay mainly focuses on exploring different planets with unique ecosystems and resources that can aid you in your mission to get to the center of the galaxy.

Much like Rust, the game features a base-building component as well as several vehicles to make navigating expansive planets a lot easier.

Lastly, it’s a lot less structured and more open-ended, allowing you to focus on the activities you enjoy most, whether that’s exploration, base-building, trading, etc.

If you really enjoy the PvP survival aspects of Rust, then Escape from Tarkov might just be the perfect game for you.

In it, players engage in map-wide raids that see them fighting over precious items that can be used to improve characters’ stats and equipment.

Like Rust, the game includes several different maps as well as a satisfying blend of PvP and PvE survival that encourages different playstyles and approaches.

There are regular wipe resets and updates to help keep the game feeling fresh and exciting, as well as a thriving community that’s always coming up with new tactics and challenges. 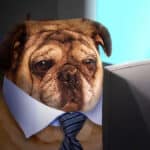