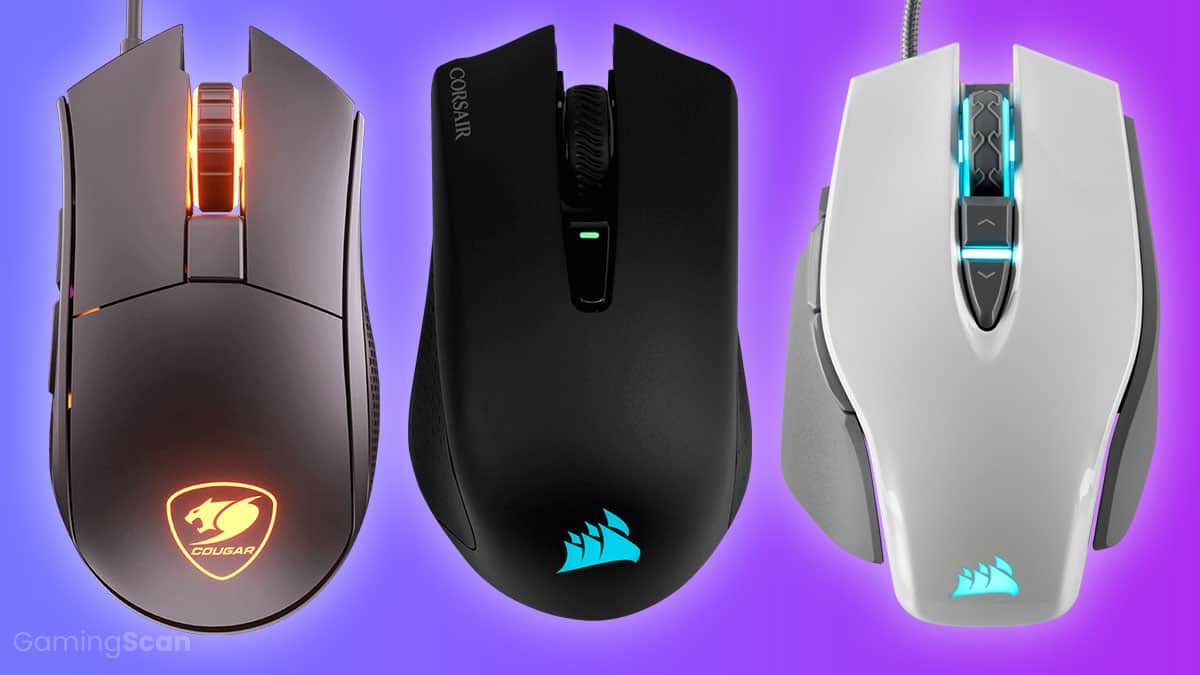 These days, there is little to behold of gaming mice. Gaming mice have relied on the same underlying technology for several years now, with manufacturers struggling to find ways to differentiate their product from the rest of the competition. Unlike CPUs and graphics cards, mice aren’t subject to a shopping duopoly – consumers can afford to be picky.

Amongst the minutiae of mice, vendors tend to try and innovate by pushing their sensors to new – and often unusable – DPI ranges to make their mouse seem like the “best” choice for players seeking a performance advantage.

It’s easy to get caught up in the sensor war, parting with way more money than needed for a mouse that is no longer advantageous than one half the price.

Similarly, one should not skimp on a mouse either; a gaming mouse needs to be of comparable quality to the rest of your build.

That said, we’ve selected our choices for best gaming mice under $50, and there are plenty more options like it, proving the best mouse doesn’t always have to be the most expensive one.

Some of these mice have also been listed in our best gaming mouse guide so be sure to check that out for more options. 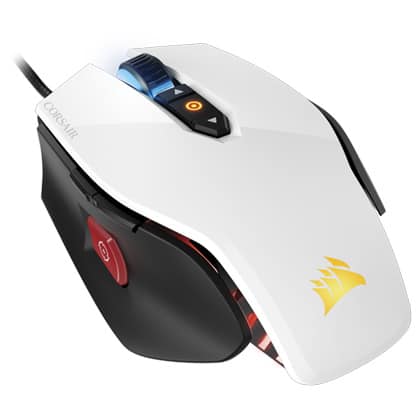 At the top end of the $50 mark, we have the Corsair M65 Pro RGB, arguably one of the best FPS mice out there, although it performs just as well in games outside of the FPS genre. For the hardcore MMO/MOBA crowd that leans heavily on macros, you may want to look at the Corsair Scimitar.

The M65 Pro RGB offers a glossy white or black finish with aluminum flourishes and a braided cable. The M65 Pro RGB also offers adjustable weights beneath the mouse, allowing users to augment the weight of the peripheral to their liking. The mouse is right-handed, and best suited for palm or claw grippers.

The M65 Pro features a 12,000 DPI optical sensor and Omron switches for the eight programmable buttons. There’s also a sniper button affixed to the side of the mouse for low DPI tracking that will lower the DPI while pressed. Admittedly, using the sniper button is a bit of an awkward stretch of the hand.

Corsair recently refreshed the M65 Pro RGB with an “Elite” option that offers an 18000 DPI sensor and slightly redesigned ergonomics. However, for less than $50, the Corsair M65 Pro RGB is one of the best gaming mice to be had. 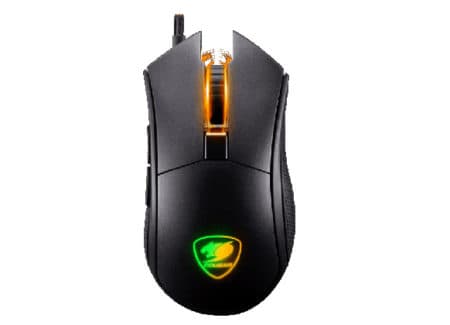 Cougar is well known for their cases, but maybe not as much for their peripherals. The Cougar Revenger S is the next excellent option when looking for a gaming mouse under $50.

The Cougar Revenger S is a non-ambidextrous mouse built for palm and claw grips, and is of respectable build quality, but not entirely on par with Corsair’s M65.

The PMW3360 offers up to 12,000 DPI and is still one of the best sensors for the price. The Revenger S also offers polling rates up to 2000Hz, which is of debatable use. It is unlikely that users would notice a tangible difference between 1000Hz and 2000Hz, and the higher polling rate eats up additional CPU cycles.

The Revenger S also offers Omron switches rated for 50 million clicks, which is something of an industry-standard at this point. Cougar also does a great job of implementing RGB lighting with the Revenger S, if that is of importance.

The Cougar UIX System, which is the companion software for the Revenger S, offers a decent experience but isn’t quite as polished as some. That aside, the Cougar Revenger S makes for an affordable gaming mouse and offers great value for the asking price. 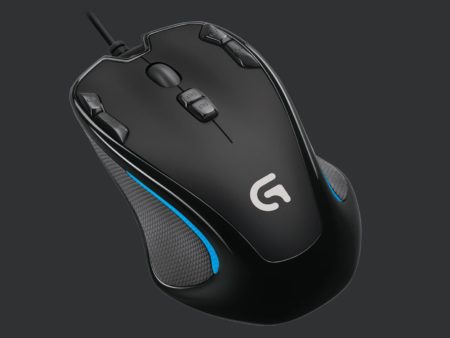 Logitech’s G300s is an old standby that still gets merit to this day, not just for being cheap, but because of the value, it offers for around $20. The G300s is an entry-level, workhorse mouse that is equally suited to PC gaming or regular PC work.

The Logitech G300s is the first mouse on this list to use an ambidextrous design, so it’s equally suited to right or left-handed gamers. It has an ergonomic profile as well, that should accommodate multiple types of grips.

The G300s offers generous onboard storage for storing profiles and settings, with nine programmable buttons. Logitech opts to use their proprietary sensors and switches with their peripherals, and the G300s offers a DPI resolution up to 2500, and the button switches are rated for 10 million clicks.

The cable is also of the non-braided variety, which may disappoint some. However, for the price and performance, this is one of a few tradeoffs that are worth it for a gaming mouse that costs $20 and is by far better than a lot of the clones from copycat brands. 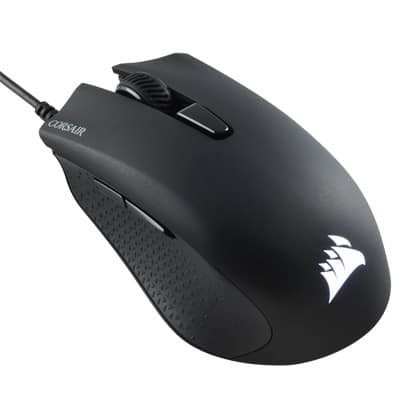 Listed as our current budget pick, the Corsair Harpoon RGB sits at the bottom of Corsair’s product stack. That said, it’s not without its merits as a budget mouse for thrifty gamers.

The Corsair Harpoon is a right-handed mouse that offers better than expected ergonomics and weight, and it doesn’t feel cheaply made – which is always a plus with entry-level mice.

The Corsair Harpoon also offers features of more expensive mice such as RGB lighting, onboard storage, and programmable buttons.

The optical sensor is rated at 6000 DPI, and the Harpoon offers one button to cycle through DPI settings. There is also a separate sniper button that can be programmed for low DPI shots in FPS games. The Harpoon also uses a non-braided cable, which is common on less pricey mice.

That said, the Corsair Harpoon is a well-rounded option for those looking for something of a minimalist gaming mouse. 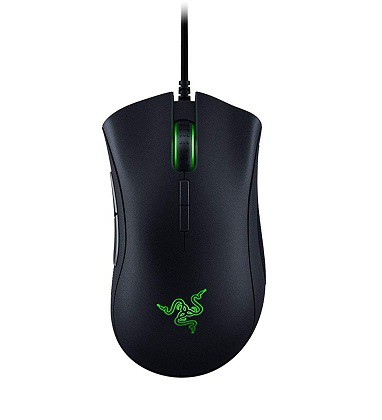 Razer’s venerable DeathAdder has been around since 2006, but Razer refreshed the mouse back in 2016. The updated DeathAdder Elite largely remains unchanged in comparison, except for some new buttons, an upgraded scroll wheel, and support for Razer’s Synapse software.

The Razer DeathAdder Elite retains the sleek, ergonomic design its predecessor was known for and offers textured grips on both sides of the body.

With the addition of two new buttons on the face of the mouse, the DeathAdder Elite provides a total of seven programmable buttons. The added buttons are presumably intended for on the fly DPI adjustments, which has become common with mainstream gaming mice.

The DeathAdder Elite has always been something of a jack of all trades gaming mouse, equally suited for multiple genres like FPS, MMOs or MOBAs.

The DeathAdder Elite used to carry a price tag of $70, but it can be found for less than $50 these days, which makes it one of the top choices if you play a wide variety of games. 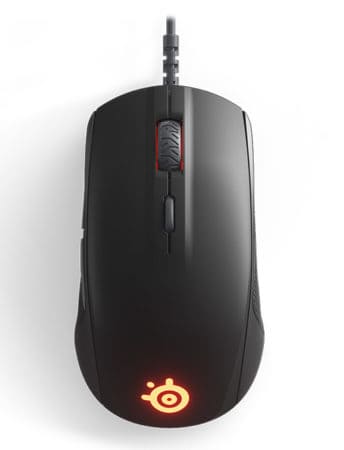 The SteelSeries Rival 110 is a well-versed budget mouse at ~$30 that ticks a lot of boxes for gaming mice.

The SteelSeries Rival 110 takes a minimalist approach, with a simple body design using a combination of matte black finishes and textured grips. The Rival 110 isn’t quite ambidextrous but does lend itself to multiple grip styles.

SteelSeries use their in-house TrueMove1 optical sensor, delivering up to 7200 DPI, adjustable in 100 DPI steps (SteelSeries prefers the term CPI). SteelSeries also implement their own switches for the six programmable buttons, rated for 30 million clicks.

SteelSeries also offer features to control acceleration, deceleration, and angle snapping. These are all available via SteelSeries’ Engine 3 software and will allow gamers to finely tune the mouse for various games — nice perks for a mouse at the $30 mark.

Overall, if $30 is all you have to spend on a mouse, it’s hard to do much better than the SteelSeries Rival 110. 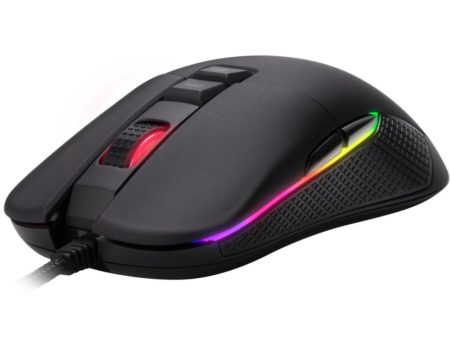 Perhaps another brand not associated with mice is Rosewill, but the company offers a rather large line up of gaming mice.

The Neon M62 is one of the more appealing options, as it usually costs around $25 and offers some nice features for the price.

The M62 is another ambidextrous mouse but is a bit on the small side. So, those with large hands or who prefer a full palm grip may find using the M62 a bit challenging.

That out of the way, the M62 uses a PMW3325 optical sensor with up to 10,000 DPI, which can be adjusted with the DPI button that can store up to six DPI settings.

The M62 also offers the RGB experience, customizable through the included software suite. Rosewill’s software isn’t as polished or featured as Logitech’s or Corsair’s but does provide a pleasant user experience.

While there are plenty of gaming mice that are priced well north of $50, that doesn’t mean you have to spend that much to get a feature-rich mouse, adept at a variety of games.

While you’re shopping, check out our best mousepads to see what will best complement your new mouse. Additionally, we have some tips for you as well, like how to disable mouse acceleration in Windows. 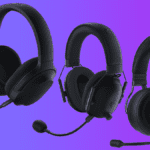