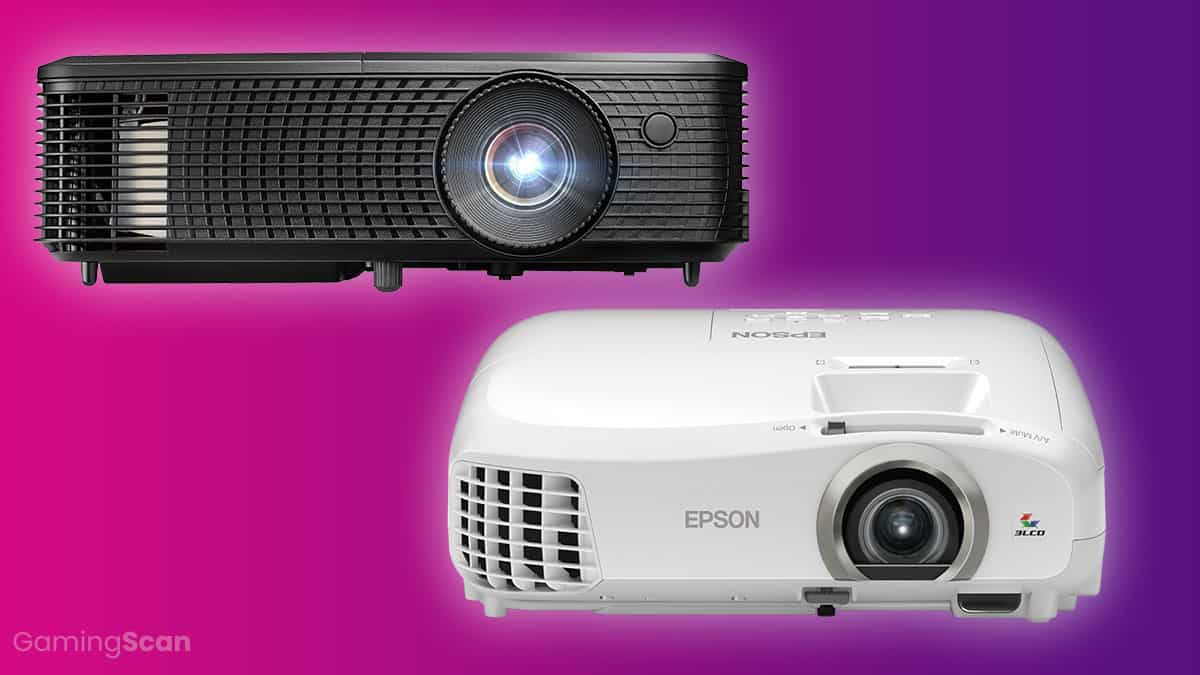 In this age of relatively affordable 50+ inch television screens, it is becoming common for people to find a TV set which fills out more than their living room.

However, there is still a better solution when it comes to balancing screen size and price.

What is this, you may ask? Why, of course, the good old-fashioned projectors.

In fact, projectors can even have certain advantages over regular TV sets, all of which will be addressed in this article, where we aim to present you with a list of the best gaming projectors of 2022. 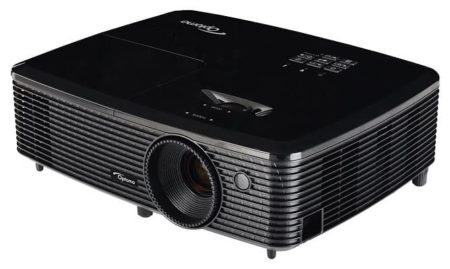 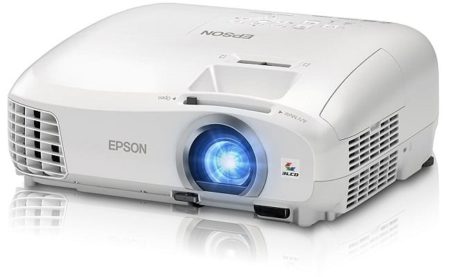 The first projector on our list comes from none other than Epson. This is a company you most likely have heard of, seeing as it is a Japanese electronics manufacturer that has been operating since 1942. That said, they have produced many types of products over their almost a century-long lifespan, projectors included.

The Epson PowerLite Home Cinema 2040 is a mid-range projector best suited for use in Home Cinema setups, as the very product name suggests. Its all-white design is pleasing to the eye, and the projector itself is quite light and compact. 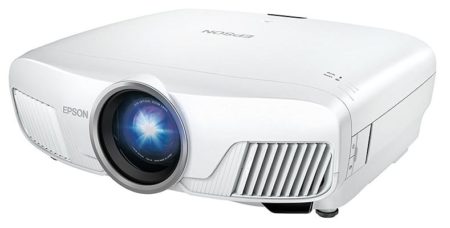 Next up, we have another projector from Epson. As a matter of fact, it is from the very same series as the previous entry. This one, however, is leagues above in terms of overall characteristics and performance.

The Epson PowerLite Home Cinema 5040Ube is a cutting-edge projector geared towards the most demanding users. It follows a similar design philosophy as other Home Cinema models: white and gray coloring, rounded edges, and grilles that serve both aesthetic and cooling purposes.  Most importantly, it is the world’s first wireless 4K projector.

The next product we have lined up comes from Optoma, a relatively young international company founded in 2002. They excel in producing multimedia products such as projectors, earbuds, and more. However, projectors are their specialization, which is evident from the quality of the products in that category that they offer.

The Optoma HD 142X belongs to Optoma’s series of projectors designed specifically with gaming in mind. At first glance, the projector’s exterior does not promise much, but it does have plenty of useful features under the hood. 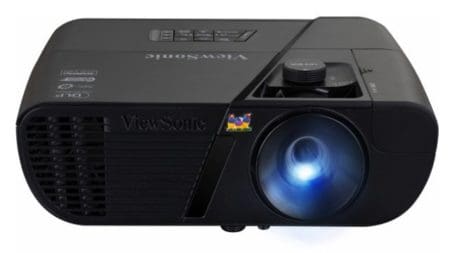 ViewSonic is a veteran Taiwanese/American company founded in 1987. Their specialization lies exactly in visual-related technology and products, which includes computer monitors, television sets, and of course, projectors.

ViewSonic PRO7827HD Rec.709 is a revised version of the company’s regular PRO7827HD projector model, and it brings several visual and practical changes and improvements. The most obvious change is the transition from a white to a black exterior, although the design remains mostly identical. However, the changes are more noticeable in terms of performance.

The Pros And Cons Of Gaming With A Projector

In this section of the article, we will be looking at the advantages and disadvantages that stem from using a projector as your preferred means of visual reproduction rather than a monitor or a TV.

This is the first and most obvious reason why you may want to use a projector over a monitor or TV set. Using a projector can get you screens as large as 200 inches. Even if you do not go to these extremes, a projector can still offer much bigger screen sizes than what is available with any reasonably priced television set.

Most projectors intended for home use are relatively small and lightweight, especially compared to TVs. This can be great if you want something more portable or simply wish to have a huge TV dominating the room when you’re not using it.

Not to say that the images generated by a projector are generally bad, but rather, they are not as refined as what you can get with a TV, which bears a similar price tag – especially if you want a bigger screen.

Some of the common problems with projected images are rainbow artifacts, lots of motion blur due to lower response rates, and more jagged edges, among others. If you want to avoid these, you will need to invest in a projector which strives to reduce those problems by using appropriate technologies.

Furthermore, if you are playing on PC and have a powerful enough GPU, the jagged edges can easily be taken care of using anti-aliasing.

While stock TV speakers won’t fulfill the needs of any audiophile, they are usually more than enough for the average user and gamer. All but the cheapest television sets offer a stereo speaker configuration with decent bass to boot, but the same can’t be said for projector speakers.

Usually, the speaker’s output power is good enough, averaging at around 10W for the most part. However, power itself is hardly all that counts. You need quality, and that is where projector speakers fail. These are almost always mono speakers with mediocre sound quality and with little or no bass.

Therefore, if you’re thinking of going with a projector over a TV for your gaming needs, be prepared to also invest in some decent dedicated speakers.

What To Look For In A Gaming Projector

If you’re looking for a good gaming projector, these are the characteristics you need to keep mind:

This is a rather obvious one that warrants little to no explanation. Today, the world of gaming is slowly transitioning from Full HD to 4K as the standard resolution. However, the change has been slow so far due to the sheer hardware power required to run games at a native 4K resolution.

Because of this, most gaming systems such as the PS4 Pro, the Xbox One X, and even certain desktop GPUs are currently mostly resorting to upscaling technologies to live up to the standard set by the new wave of 4K televisions.

While there are currently no accessible native 4K home projectors, there are those which are “4K Ready” and achieve that via the aforementioned upscaling technologies.

Ultimately, you shouldn’t go with anything under 1080p, and if you plan on spending good money on a projector, it would be best to keep 4K capabilities in mind because they make for a more future-proof solution. 4K gaming will likely become the norm in a couple of years, and with the next console generation right around the corner, be sure to plan ahead!

Projector response times are rarely openly disclosed by manufacturers, and for a good reason – they’re far from the best response times around. They are usually upwards of 14ms, which is already significantly slower than gaming monitors and somewhat slower than the average TV.

The main drawback of high response times is motion blur, which can be quite problematic for playing fast-paced games with lots of camera-jerking, and it can also cause issues for people prone to vertigo. Therefore, base your choice of a projector on your requirements.

Truth be told, unless you are used to playing on high-quality gaming monitors with 1ms response times, you are unlikely to notice the difference. Otherwise, any good projector will have a sufficiently fast response time for your needs, but always keep the above in mind.

This is not something you need to concern yourself with since any decent projector has a more than sufficient contrast ratio for all your gaming and home theater needs. A high contrast ratio simply governs how “deep” the blacks appear, and any ratio upwards of 10.000:1 is unlikely to leave anyone wanting.

A projector’s maximum brightness, measured in lumens, will govern your projector’s ability to perform in lit areas. Again, this is nothing to concern yourself too much with, especially if you’re able to darken your gaming room. 2000 lumens are enough for dimly-lit rooms and 3000 will be enough even for more brightly lit ones.

And finally, we come to the very best gaming projector, and it is the Optoma HD 142X.

So, what puts it above the competition?

First and foremost, it is a projector built specifically for gaming. Because of that, it can minimize the abovementioned problems that are common when it comes to gaming with a projector.

It offers the best response time out of all the projectors on this list, which reduces motion blur, and is also the brightest with 3000 lumens which are more than enough to avoid any light pollution from whatever source.

Ultimately, it is the best gaming projector, although there are others that would undoubtedly perform better when it comes to playing movies and reproducing other types of media. For gaming purposes though, it is the best value projector you can buy. 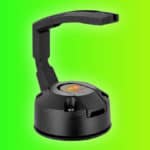