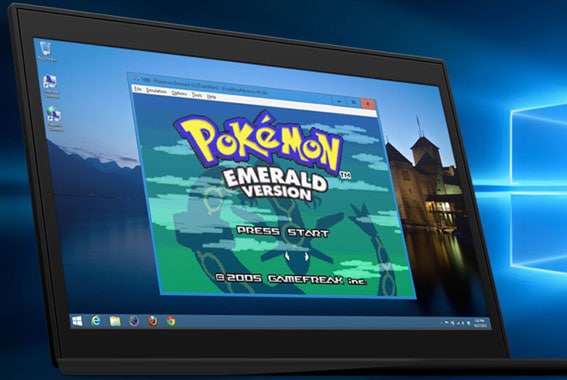 If you played GBA games when you were young, the chances are that you’ve had the urge to play them again at some point, whether it was from nostalgia or just boredom.

While a bit questionable in terms of legality, emulators are the most reliable and inexpensive way of reproducing that retro GBA experience.

Regardless of whether you discovered the existence of emulators and ROMs on your own, we’ll introduce you to some of the most effective ones you can use today.

Before you know it, you’ll be well-equipped to relive the memories of your favorite GBA games from the old days. You can even try the ones you never got to enjoy, too!

What Is An Emulator?

If you’ve never heard of the emulator before, we have some life-changing news for you. Essentially, an emulator is what you get when an entire program is recreated within another program. As such, a GBA emulator recreates the software and coding of a GBA emulator on a more current system, such as a PC or smartphone.

Emulators are great because many of them add features that were not available to the original device. For example, some GBA emulators have integrated cheat code functionality, extra save slots and double-speed functions that let you skip through long stories, credits, or dialogue.

While some might consider these quality-of-life improvements to be closer to cheating, you can’t deny that they make your life a bit easier.

Using an emulator couldn’t be easier. You just need to navigate to the game that you want to play, and it should boot up automatically, as the emulator program is more or less self-contained. However, there is one more essential step: collecting your ROMs.

What Is A ROM?

The word ROM stands for Read-Only Memory. Additionally, when we say ROM, we’re actually leaving out the second half: the full term is ROM file or ROM image. Essentially, a ROM is like a “picture” of the game that you would play on your emulator, and the emulator reads and interprets that picture to run the game.

Unfortunately, this is where the questionable nature of emulators comes into play. While emulators are not inherently wrong, and you can even create them yourself, downloading ROMs from the internet or receiving them from others is technically piracy.

Since you’re receiving an image of the game itself, it’s the same as downloading music or videos for free online.

While we can’t necessarily condone this act, you can always purchase old GBA games and turn them into ROMs yourself. While this is still a bit of a grey area, it’s not quite piracy either – as long as you don’t share them.

Whichever path you decide to take, be careful during your adventures. While there’s not a lot of protocol in place for emulators, as they’re mainly used to play games that are difficult to find or not sold anymore, using emulators to play more recent games is a bit more questionable (and a lot more difficult).

Because emulators are nothing more than programs, it’s entirely possible to create them yourself. As such, there is a variety of them out there already.

Some of them are free, some are not, some have extra options, and some are more stable than others.

The ones we list in the remainder of this guide are only the best of the best GBA emulators for you to choose from.

Visual Boy Advance is widely considered one of the best GBA emulators available. It’s also one of the oldest GBA emulators. Still, because it’s been around for so long, the software has had plenty of time to improve, patch itself, develop compatibility to many games, and optimize.

One of the most helpful features of Visual Boy Advance is that it’s still a supported and updated program. That means if a new Windows or macOS patch breaks the emulator, for example, a patch to the emulator that fixes the issue will be released before too long. Not all emulators have this kind of support – although all of the ones in our guide today have this support.

No$GBA, or No Cash GBA, is an emulator that’s known for, well, being free. While almost all emulators are free, this one is particularly obvious because of its name. No$GBA is different from Visual Boy Advance because it supports some extra features.

The standout feature of No$GBA is that it also allows you to play Nintendo DS games within the same program. While this can cause a bit of lag since NDS games are more demanding than GBA games, it can still run most games pretty well. Of course, having a beefier computer always helps with this.

No$GBA is excellently optimized, as well. This is what allows the emulator to play NDS games, which can be too much for some other emulators. No$GBA lets you use controllers, also, which GBA purists will appreciate.

mGBA, while a bit of a simple emulator, has a few uncommon features that gamers will enjoy. Additionally, many emulating beginners will appreciate the ease of setting up and using this emulator. In this list, there isn’t anything more accessible than the mGBA program.

For one, mGBA supports extra save files within the game aside from native saves. It has multiple slots available for this, too. This means you can save in various places before embarking on challenging missions, and you can regain your previous process if you fail even if you wouldn’t usually be able to.

This also means that you can run multiple instances of a game at the same time. While many GBA games would only allow you to keep one or a handful of saved games recorded on the device, mGBA will enable you to record several. This is good for if you want to explore some scenarios, or you could share the game between you and a few friends.

Additionally, mGBA supports updates and patches for your ROMs. As such, if you have a buggy or customized game, mGBA will allow you to repair those issues. It supports the use of cheat codes, too, and it supports virtually every GBA ROM available.

While there are many different emulators out there for many different games and platforms, GBA is undeniably one of our most nostalgic ones. Every emulator brings a little something to the table, but these three are the most useful and most stable and are packed with valuable features.

There are many emulators out there that we didn’t include in this list. The main reason for this was to refrain from listing emulators that have the same features.