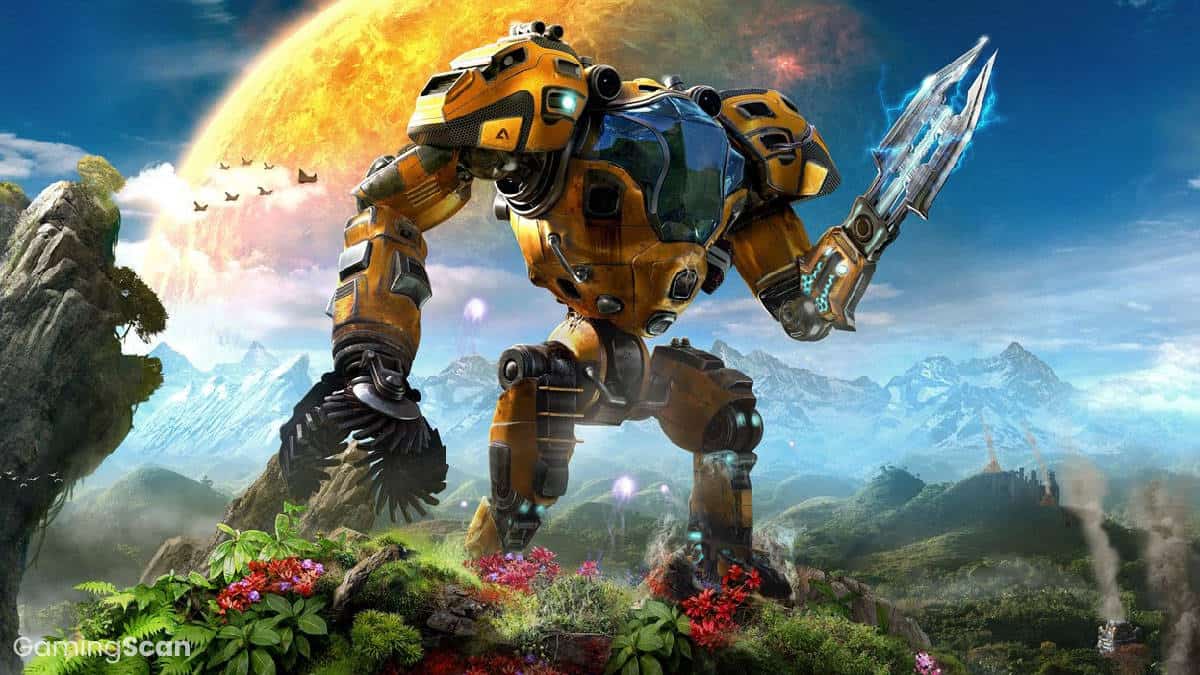 If you’ve been searching for new mech games on PC and coming up short, we’ve got you covered with the top mech games where you pilot your own suit of armor and head into combat.

From tactical turn-based battles with lumbering machines to stylish high-octane showdowns with cool-looking robots, there’s a mech game out there for every kind of fan.

We’ll be updating this list in the future with new titles, so make sure to check back and let us know if we missed any of your favorite mech games!

Our first recommendation is a new mech game released in 2023 by EXOR Studios titled The Riftbreaker, in which you take on the role of scientist/commando named Ashley.

Ashley is joined by her mech Mr. Riggs as the pair try to establish a settlement on an alien planet whose natural inhabitants aren’t too keen on visitors.

Alien creatures will frequently invade settlements, forcing Mr. Riggs to step into action and blast them away using his machine gun, rocket launcher, sword, and more.

Gameplay incorporates elements of survival, tower defense, and twin-stick shooting, with players having to gather resources while building and defending a network of bases across the planet’s surface.

Set in the year 2049 at the peak of the Second Cold War, it sees you taking on the role of a young American mech pilot named Ethan as he’s forced to battle nightmarish creatures that invade Earth.

Equipped with his Mobile Armor, a powerful and highly customizable mech, Ethan heads into combat with countless other soldiers to carry out large-scale operations against waves of enemies.

The huge scale of Mecha Knights’ battles does a great job of making you feel like you’re wrapped up in a much bigger conflict in which nations come together against a common enemy.

For something a bit more tactical, Mech Armada is a turn-based strategy mech game set in a post-apocalyptic world where invaders called the Swarm have driven survivors to seek shelter underground.

After years of gathering resources and building combat armor, the survivors venture out to the surface to take back their world and exterminate the Swarm.

Each battle requires you to strike a good balance between offense and defense to get the most out of your resources and survive as long as you can throughout a procedurally generated roguelike campaign.

Standing in stark contrast to many of the mech games on this list, Mighty Goose belongs to a subsection of side-scrolling 2D platformers known as run and guns.

In it, you don the mantle of the titular hero Mighty Goose, a mech-wearing fowl and one of the best bounty hunters across the galaxy.

Retro-inspired pixel art is further complemented by a bombastic soundtrack comprised of crunchy synth-rock and funky jazz-fusion melodies that bring this old-school action game to life.

B.ARK is another 2D side-scroller with a Saturday morning cartoon-inspired look that sees you piloting a team of four-legged pets turned heroes as they defend the world from an evil cybernetic fish armada.

Designed with co-op in mind, gameplay sees you combining your heroes’ different mech abilities to perform powerful fusion attacks that can rip through enemies and turn the tide of battles.

Bosses also possess unique abilities and attack patterns that become harder over time and require you to adapt to survive.

Throughout each level, you and your partners are working together while also competing for the highest score by gathering plutonium from fallen enemies.

Next up, Override: Mech City Brawl is a 3D arena fighter that has robots duking it out on city-scale battlefields using supercharged abilities and weapons.

With a roster of 12 unique fighters, the game covers just about every robot trope there is, from stylish Gundam-inspired mechs to a Mecha Godzilla-inspired lizard and even a rocket-powered llama.

Fighters can be further customized using unlockable accessories and skins to shake up their look and strike fear into your metal foes.

Combat is a lot slower than you’d expect from an arena fighter and primarily revolves around countering attacks and using the environment to gain the upper hand in 1-4 player matches.

Devader wears its love for ‘90s twin-stick shooters on its sleeve while injecting its own unique brand of flavor into the genre with crazy bosses and powerful weapons.

In it, you play as the last hope for an ancient civilization facing extinction at the hands of a deadly alien species known as the Krin.

Gameplay has you taking to the battlefield inside a versatile mech with strategic weapons and tailored upgrades that allow you to hone in on a particular playstyle.

Devader’s campaign features over 100 waves to mow down along with complex champion boss encounters brimming with tentacles, lasers, lightning beams, and an onslaught of projectiles.

If you’re a fan of both mechs and tactical combat, then there’s a good chance you’ve already heard of Into the Breach considering its critical success among genre fans.

It comes from Subset Games, the same developer behind FTL: Faster Than Light, and features an equally satisfying gameplay loop that revolves around increasingly difficult mech vs. alien encounters.

Set in a far future where humanity is forced to wage war with an army of monsters known collectively as the Vek, it sees you leading soldier-operated mechs into battle.

Each one can be equipped with a variety of weapons and armor types that allow you to devise unique strategies across a series of procedurally generated scenarios with different environments and hazards.

Chief among these is its approach to character and mech customization, allowing you to make personalized loadouts using different parts, paint schemes, and hyper-specific weapons systems.

Out in the field, Daemon X Machina switches to a fast-paced arena fighter that sees you leveling city blocks and dodges projectiles as you hone in on enemies and fire rockets in their direction.

The movement system is extremely fluid and benefits from detailed animations that add a great sense of weight and power to every attack.

This list wouldn’t be complete without mentioning one of the most popular mech games around today, the strategic turn-based tactics game BattleTech.

In it, you take on the role of commander of an elite mercenary unit with high-powered mechs at their disposal in a dystopian future.

The game takes place during the year 3025 and sees your unit entrenched in an ongoing war between noble houses threatening to use advanced technology to destroy one another.

Battles emphasize using environments, positioning, and special abilities to gain the upper hand as well as mastering a robust customization system that lets you modify your mechs’ appearance and weapon loadout.

One of the more high-profile entries on this list, many still consider Titanfall 2 underrated as far as triple-A first-person shooters are concerned.

Plagued by poor marketing and a competitive release window, the game has amassed its own cult-like following over the years, in part due to its satisfying mech combat and parkour-inspired movement system.

The single-player campaign tells a distant future story of a soldier and his mech as they become entangled in a time-traveling conspiracy that forces them to suit up and head into battle.

It all plays out very cinematically with thrilling set-pieces and engaging battles complemented by a variety of well-designed PvP modes.

Released during the insane 17-year gap between MW4 and MW5, MechWarrior Online has done a fine job at bringing and keeping players together for action-packed mech on mech combat.

While it has a relatively steep learning curve compared to many of the games on this list, the fact it’s free-to-play means you have nothing to lose by giving it a try.

The biggest hurdle to overcome is coming to grips with the game’s systems-driven resource management, which forces you to monitor your mech’s heat levels to avoid frying your suit among other gauges.

Although MechWarrior purists may prefer dedicated single-player entries such as the aforementioned MechWarrior 5, Online is a great alternative for facing off against other mech fans.

Speaking of MechWarrior, the latest installment is also worth checking out for anyone who enjoys piloting lumbering hunks of metal through sprawling environments overrun with enemy fodder.

MechWarrior 5 doubles down on the meaty combat the series is known for while introducing new tactical elements for slower-paced but more focused mech combat gameplay.

Throughout the campaign, you’re tasked with strategically growing an army to combat invading forces and create as much destruction as you can.

While many mech games are about stylish attacks or methodical maneuvers, MechWarrior provides a refreshing punch to the gut for the mech game genre.

A perfect example of more stylish mech games is Strike Suit Zero, which starts out as your standard spaceship dogfighter before diverging into a Gundam-inspired action shooter.

You play as the pilot tasked with defending Earth amidst an interstellar war during 2299 using a revolutionary fighter craft with the ability to transform into a mech suit.

Armed with your spaceship-mech combo, you’ll dish out galactic justice by locking onto enemies and firing an array of explosive artillery all in one go.

While the Earth Defense Force games don’t primarily revolve around mech combat, each entry gives you the option to hop into a suit and unload on massive alien bug invaders.

Every installment is equally bizarre in its own way, though the most recent Earth Defense Force 5 makes several refinements and quality of life improvements to the series’ core gameplay loop.

Players can don modest, human-sized mechs, as well as towering power suits such as the BM03 Vegalta or BMX10 Proteus for taking down larger threats.

EDF5 is far from the doom and gloom kind of mech games we’ve discussed heavily on this list and instead focuses on ridiculous large-scale battles and all-out chaos.

Brigador is another mech-driven twin-stick shooter with a retro aesthetic that fits nicely with the game’s cyberpunk-inspired setting.

You play as mercenary pilots betraying their planets by selling their services to the highest bidder and wreaking havoc on the city of Solo Nobre.

Just about everything you blow up nets money for your pilot that can be used to unlock new vehicles, guns, and challenges to put your destructive powers to the ultimate test.

The game manages to keep things interesting by factoring in civilian casualties and advanced targets that must be prioritized before they can call for reinforcements.

It may surprise you to learn Double Fine, yes that Double Fine, actually tried their hand at making a mech-based action-strategy tower defense game back in 2012.

While it’s far from perfect, Iron Brigade caught on due to its earnest exploration of B-movie tropes and WWI-era military aesthetic.

Each level sees you pushing back against waves of aliens to protect different resources and facilities using a customizable mech you can outfit with various weapons and gadgets.

Over time, new enemy types get introduced, forcing you to adopt new strategies and combinations to succeed at a steady pace or risk losing it all.