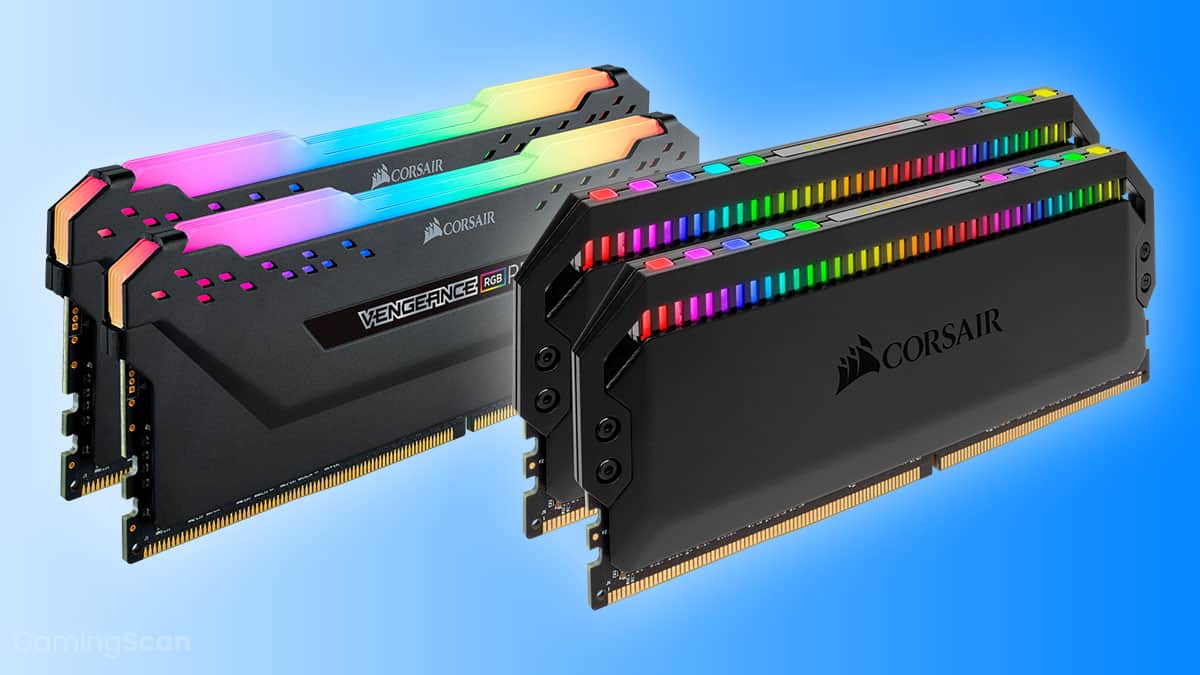 While it goes without saying that the GPU is the most important component in a gaming PC, that does not mean that other, seemingly less vital components should be overlooked.

And sure enough, while the GPU and the CPU tend to be most gamers’ focus points while they are putting together their new gaming PC, RAM is also not something you will want to skimp on.

Granted, finding the right RAM kit is not as challenging and it is not as crucial to gaming performance, but more and more games take advantage of the fact that PCs now have access to more and more RAM, not to mention that higher RAM capacity helps the system function better as a whole.

Without further ado, we will now be going over some of the best RAM that you can get if you are building a gaming PC in 2022, and we will also answer some common questions that you might have on the subject, so read on! 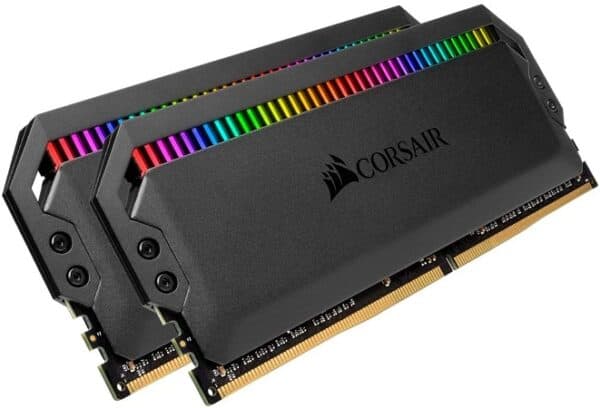 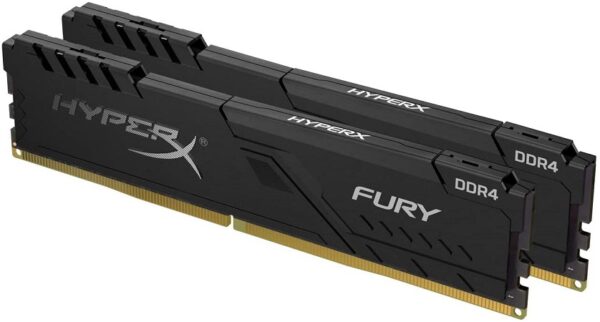 First on our list, we have a RAM kit from one of the most prestigious names in the world of memory products, HyperX, which was up until recently owned by Kingston.

The particular kit in question belongs to the HyperX Fury lineup, which includes a wide array of products, from affordable entry-level solutions to RGB-equipped high-end modules with plenty of overclocking potential. This particular set, however, belongs in the former category.

That said, this is a budget-friendly RAM kit that features a simple and inconspicuous yet rather appealing exterior design, with its sleek black heat spreaders that are bound to fit virtually any build. More importantly, the stock 3200 MHz speed and Intel XMP profiles make it a great pick for Intel builds.

On the downside, 8 GB of RAM just isn’t all that great for gaming in 2022, and while it’s technically enough to run most games, it might struggle with some of the more memory-hungry ones, not to mention that it’s far from ideal in the long-run, so you might want to consider going with 16 GB, if budget constraints are not an issue.

Moving on, we get to yet another familiar name in the world of gaming peripherals and components: Corsair. And the first Corsair offering we’ll take a look at here is their Vengeance LPX series of products, which has been around for a while now.

With the above in mind, the Vengeance LPX is nothing to marvel at when the design is concerned. The heat spreaders look dated by today’s standards and the branding can really clash with a build’s aesthetics, so obviously, that’s not where this particular kit’s strengths lie.

Rather, what makes the Vengeance LPX so appealing in 2022 is its solid performance, the good value for the money that it offers, and the fact that it is readily available in an array of different kits, with capacities ranging from 16 GB to 256 GB.

Of course, it goes without saying that such high capacities aren’t necessary for gaming, but those who also intend on using their PC to run some memory-intensive software and don’t want to overspend on RAM are bound to appreciate this.

The next pick on our list also comes from Corsair, and this time, we will be taking a look at the Corsair Vengeance RGB Pro, a lineup that seems to have all the important bases covered.

As evident from the name, the Vengeance RGB Pro comes with RGB lighting built-in, and considering how much more popular RGB has gotten in recent years, that’s definitely great news for gamers who like to keep the aesthetics of their build in mind.

And speaking of which, Vengeance RGB Pro is readily available in two flavors, featuring either black or white heat spreaders. While the former would likely be a better fit for most builds, the latter is great to have with the rising popularity of cases and components that focus more on white and different shades of gray rather than black.

Performance-wise, Corsair Vengeance RGB Pro works great on both Intel and AMD chipsets and there is a fair bit of overclocking headroom. Granted, it’s not an enthusiast-grade kit that will appeal to the master overclocker, but as far as your average gaming build is concerned, it has all the important bases covered.

Unfortunately, this kit might not be a good fit for small form factor builds, as the heat spreaders are a bit taller than in most modules, which could lead to some clearance issues in cramped cases. Moreover, while not exactly expensive, Vengeance RGB Pro is definitely on the pricey side, although it still offers great value for that money. 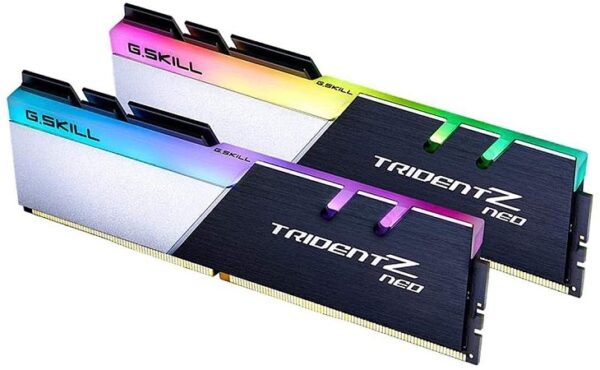 Moving on, we get to another familiar name as we take a look at one of G.Skill’s excellent Trident Z Neo kits, and it’s a high-performance, high-capacity kit that is bound to appeal to many an enthusiast—Ryzen users in particular.

Even design-wise, the Trident Z Neo won’t leave anyone indifferent. With its stunning design that features both a sleek metal heat spreader and high-quality RGB lighting, the Trident Z Neo kit will add a dash of that distinct, aggressive gaming flair to any build, although some might find it to be a bit too conspicuous for their tastes.

Performance-wise, Trident Z Neo is a step up from the Corsair Vengeance RGB Pro, and although it won’t make much of a difference in terms of in-game performance, the faster timings and more overclocking headroom make this kit much more appealing for enthusiasts and professionals who need high-performance memory.

Overall, the obvious downside to the Trident Z Neo is the pricing, as the high-capacity, low-latency kit that we picked is relatively expensive. Still, for those who actually need the kind of capacity and performance that it offers, it will be more than worth the money.

Next up, we go back to Corsair with their Dominator Platinum RGB memory, which is another series that focuses on high-performance RAM.

Visually, the Dominator Platinum RGB follows a similar design philosophy that we’ve previously seen in the Vengeance RGB Pro, with sleek—albeit tall—heat spreaders and top-notch RGB that can easily be controlled and synced up with other Corsair products using their iCUE software.

On the performance front, it is in the same league as the G.Skill offering that we’ve taken a look at above, with superb overclocking potential and fast timings, so it is, once again, a great fit for professionals and enthusiasts who are not willing to settle for anything but the best.

Ultimately, the Dominator Platinum RGB doesn’t have any glaring shortcomings that we haven’t mentioned previously: it is quite pricey, and the heat spreader design might be an issue when it comes to fitting the kit inside more cramped cases. Apart from that, though, it is a top-notch RAM kit through and through.

How To Find The Best RAM For Your Needs

Now that we have gone over some of the best RAM that you can get at the moment, it’s time to take a closer look at some of the important factors that you should consider before settling on the final pick.

Capacity: How Much RAM Do You Need?

The first and, arguably, the most important question that you will ask when shopping for a new RAM kit is: how much RAM do you actually need for a gaming PC?

Fortunately, this is not a difficult question to answer in 2022.

Essentially, 16 GB of RAM is what you should be aiming for at the moment, as it is more than enough memory to run the latest AAA games, all the while it is also affordable enough so that you don’t really have to break the bank in order to equip your PC with this amount RAM.

In the case that money is indeed an issue and you’re trying to build a good PC on a tight budget, then 8 GB of RAM will still cut it, although it’s not exactly future-proof. Fortunately, RAM capacity is extremely easy to expand further down the line!

Finally, RAM capacities of 32 GB and above are, quite simply, overkill when it comes to gaming at the moment. Unless you intend on using your PC as a workstation, as well as a gaming PC, then there is no need to aim at anything above 16 GB as of yet.

Speed: How Fast Is Fast Enough?

Much like a CPU or GPU, RAM modules come with clock speeds. When it comes to RAM, the clock speed indicates its data transfer speed, i.e., how fast it can read and write data. Naturally, faster is better, but RAM speed isn’t as relevant to gaming performance as capacity is.

Something else we should note is that the RAM speed should not be lower than your CPU’s specified memory speed. If we’re looking at the latest CPU models, Intel is currently favoring 3200 MHz, while AMD CPUs aim at 3600 MHz. Of course, your system would still be compatible with slower RAM, but the CPU specification should be the minimum speed if you want to get the most out of your money.

And, as you might expect, overclocking can obviously help with RAM performance, but whatever benefit it brings to in-game performance is quite minor, so it is generally not worth it if it necessitates any significant hassle or additional expenses.

Dual-Channel RAM: Is It Worth It?

Something that you have undoubtedly noticed is that most gaming builds tend to feature multiple RAM modules. Needless to say, this is for a reason, and that reason is dual-channel configurations.

In addition to that, there’s also the fact that it’s easier and cheaper to replace faulty RAM sticks if you have a multi-channel configuration.

It’s worth noting that quad-channel configurations exist, too, although you’ll only find them supported in high-end motherboards and enthusiast-grade CPUs that are mainly oriented towards professionals rather than gamers.

With all that said, it is time to pick the winners!

If you are working with a limited budget and don’t exactly have high requirements in terms of performance or aesthetics, HyperX Fury would be the ideal pick. It offers a combo of solid performance and a neutral design that aged quite well, combined with an approachable price tag.

On the other hand, if it is high-performance RAM you’re after, then Corsair Dominator Platinum RGB is the clear choice. While it is not the fastest RAM currently on the market, it is an overall great pick for gaming due to its high performance, good overclocking potential, and attractive RGB lighting.

And in the case that you’re simply looking to get the best value for your money, then the Corsair Vengeance RGB Pro should be right up your alley. As mentioned before, it is not high-end memory aimed at enthusiasts, but the performance it offers is still more than good enough for gaming, not to mention that it still has the benefit of quality RGB lighting for those who are also after a translucent case.

And that would be about it for this guide! Hopefully, you have found it helpful, but be sure to stay tuned for a big update coming in late 2021 when Intel and AMD roll out their first DDR5-compatible CPUs! 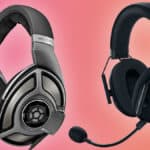