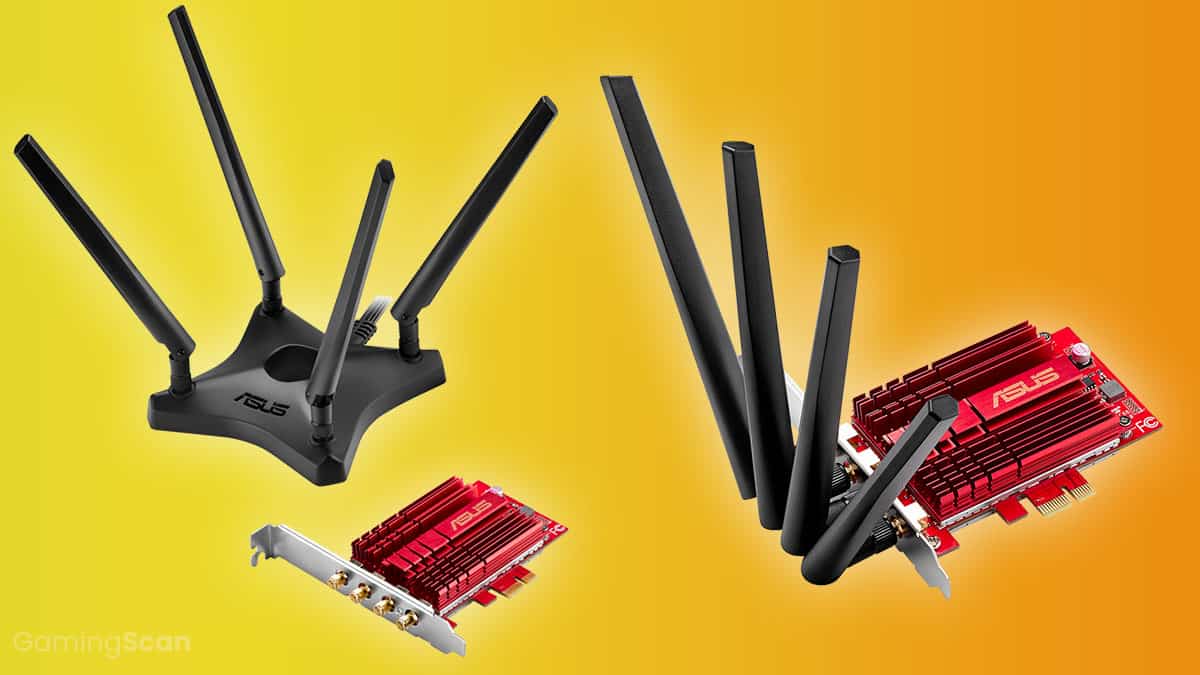 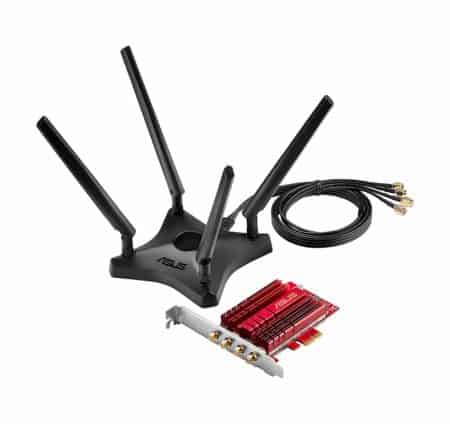 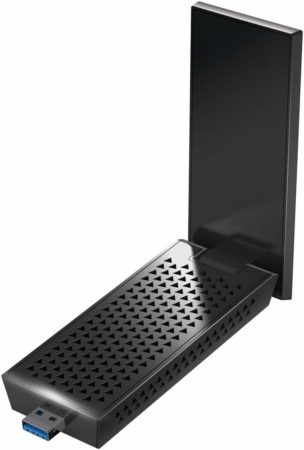 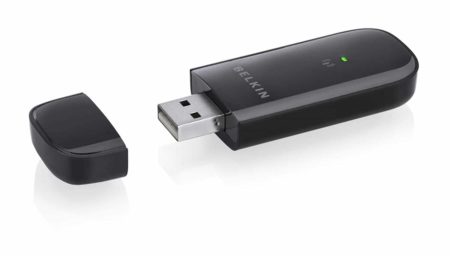 For a long time, desktop PCs were stuck with Ethernet cables as the only means of connecting to the Internet. Luckily for all of us, there is a much more flexible and cleaner solution today:

Yes, that’s right. Simply plug one into your computer and enjoy wireless connectivity, as well as the full freedom to move your PC anywhere in your home without having to worry about how to get meters upon meters of cable between it and the router.

Not every adapter is the same, though. Because of that, we have created this list where we will mention and discuss a range of adapters for a variety of needs. 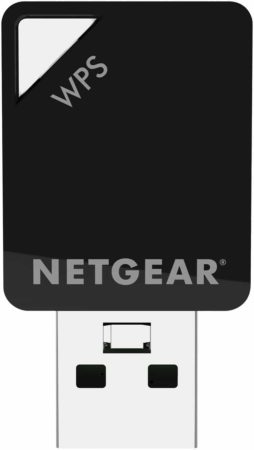 Netgear is a company of high renown in the world of networking equipment, as their name implies. It was founded in 1996 and is one of the leading companies in the field today. As such, it is only natural that wireless adapters would be part of their inventory.

The Netgear A6100 is a small and inconspicuous Wi-Fi adapter. It sports a glossy black exterior which appears a tad bulkier than what is usually seen with USB adapters of this size. There are no details on it apart from the company logo and a WPS button.

Next up, we have another product from Netgear, and from the same family no less. The product in question is the Netgear Nighthawk A7000, and it follows a similar design philosophy as the router of the same name.

The main body of the adapter is adorned with a triangular pattern, while the four internal antennae are covered by a solid glossy black surface, which further sports a three-dimensional rhombic design on its back.

Belkin is a seasoned electronics company, founded back in 1983. They grew quickly and had become involved in the production of all sorts of electronic goods, from audio systems and smartphones to, of course, networking.

The Belkin N300 is a simple and affordable adapter. It is not a sight for sore eyes, seeing as it appears pretty much like any other USB stick, with a black glossy exterior and a single green light that signals whether it is connected to a network.

It is far from the best wireless adapter, but it gets the job done. We also have a guide on how to set up a Belkin range extender, if you’re interested. 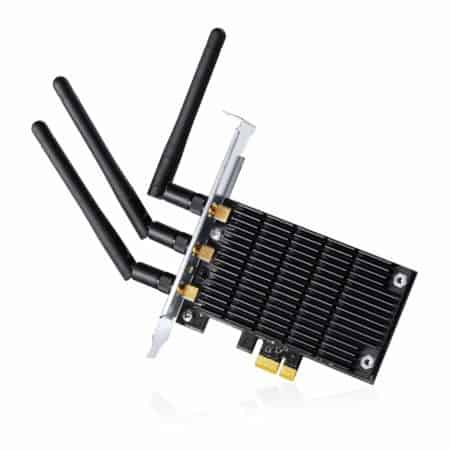 TP-Link is a highly recognizable name in the IT circles. It is a Chinese company founded in 1996 that specializes exclusively in networking technology, manufacturing everything from modems, routers, and wireless adapters to data switches and smart home equipment.

The Archer T9E is an internal wireless adapter that plugs directly into your motherboard’s PCIe slot. It boasts three prominent antennae and even has its own aluminum heatsink, which says something about the performance this device brings to the table.

Everybody knows Asus by their motherboards and their gaming-oriented STRIX-series graphics cards. This Taiwanese giant, however, has a much more extensive inventory that includes smartphones, smartwatches, various peripherals, networking, and more.

The PCE-AC88 is a somewhat unusual internal wireless adapter in that it consists of two parts: a PCIe card and a magnetized external base which hosts the adapter’s antennae and connects to the card via four individual cables. The card itself sports a vibrant red heatsink, while the antenna base has a fairly minimalistic black exterior.

How To Pick The Best Wireless Adapter For You

Tastes and requirements differ from person to person. Therefore, in this section, we will be looking at important traits and characteristics of different wireless adapters in order to help you figure out which one fits your needs best.

The first and most obvious thing you should keep in mind when choosing a wireless adapter is, of course, the speed of your Internet connection. Namely, you need to keep two things in mind:

Usually, in the first case, speed wouldn’t be so much of an issue since wireless transfer speeds are much greater than what is offered by most broadband ADSL or coaxial cable connections. However, fiber optic connections are becoming increasingly more common around the world, so you should always check whether the adapter can support the extreme speeds made possible by this type of connection if you are using it.

As for the second case, it is not so much a question of compatibility as it is a question of you not over-spending on an adapter that is more powerful than what you need. Obviously, gigabit wireless transfer speeds won’t do you much good if you have a 10 Mbit ADSL connection.

Your Wireless Router And The Wi-Fi Technology Used

Since Wi-Fi connectivity is the norm today, you will never encounter an ISP providing you with a modem that doesn’t support it. However, the wireless technology that they use is another matter.

Modern routers can be divided into two categories: those using 802.11ac and those using 802.11n wireless technologies. Furthermore, what should also be taken into account is if the router has single-band or dual-band connectivity, as these can affect compatibility and maximum transfer speeds.

Both of these technologies are fully backward-compatible, so you don’t need to worry whether your adapter and router will work together. However, what you should keep in mind is the maximum transfer speeds supported by these technologies.

The theoretical maximum speed of 802.11ac is 1300 Mbits, while that of 802.11n is significantly lower at 450 Mbits. This is important to keep in mind when considering whether an adapter will be able to match your connection speed. Do not forget: these maximum speeds are only theoretical and will vary when put in practice.

This is a similar situation as above, and it again focuses on transfer speeds. A single-band and a dual-band router will always be compatible with one another, but keep in mind that the lower frequency 2.4GHz band has a much lower transfer speed than the higher frequency 5GHz band.

As such, if your adapter supports gigabit speeds thanks to dual-band technology while your router only uses a single band, then the adapter will only receive the 2.4GHz signal, and the 5GHz band would just be sitting idly.

Next up, you need to consider the way that the adapter will be interfacing with your computer. As you can see from this article, there are two types of wireless adapters: internal and external. The latter relies on the computer’s USB ports, while the former plug directly into a motherboard’s PCIe slot.

If you are a laptop owner, then your only choice is an external adapter, for obvious reasons. Such adapters can use either USB 2.0 or USB 3.0 ports, with the latter being backward-compatible and the only difference being speed. USB 2.0 supports transfer speeds of up to 480 Mbps, while USB 3.0 can go as high as 5 Gigabits.

Desktop PC owners have a wider selection that includes internal adapters. As mentioned above, these plug directly into one of your motherboard’s PCIe slots, which makes for a faster and more stable connection than what a USB port offers.

However, make sure to check whether you have sufficient motherboard space for this expansion and also see if some of the other components, such as the graphics card, might be blocking the PCIe slot you intend to use.

And lastly, there is the matter of just how powerful and stable a signal the adapter can ensure.

The very first thing to keep an eye out for is whether it uses an internal or an external antenna, as well as whether there is only one or several.

An internal antenna is conveniently hidden from sight inside the adapter’s body, resulting in a sleeker look and makes the adapter easier to transport. An external antenna, on the other hand, is attached to the main body of the device and can be adjusted either two-dimensionally or three-dimensionally, which varies from adapter to adapter.

Now, when it comes to choosing one over the other, there are two factors that can affect signal strength: distance and walls. Granted, any object will weaken a signal that passes through it, but walls are the only obstacle dense enough to lead to a noticeable decrease in signal strength. Therefore:

So, in the end, which wireless adapter can be considered the best?

As far as we’re concerned, it is the Netgear Nighthawk A7000.

This external adapter has just the right combination of traits to make it suitable for almost any user:

Granted, it is on the pricier side and the design may not appeal to all, but when it comes to sheer practicality, the A7000 has no equal.

And lastly, if you are already shopping for an adapter, why not check out our selection of the best wireless routers while you’re at it? Or perhaps a WiFi extender if you want to boost your WiFi signal instead? Perhaps you could use an upgrade in that department too.