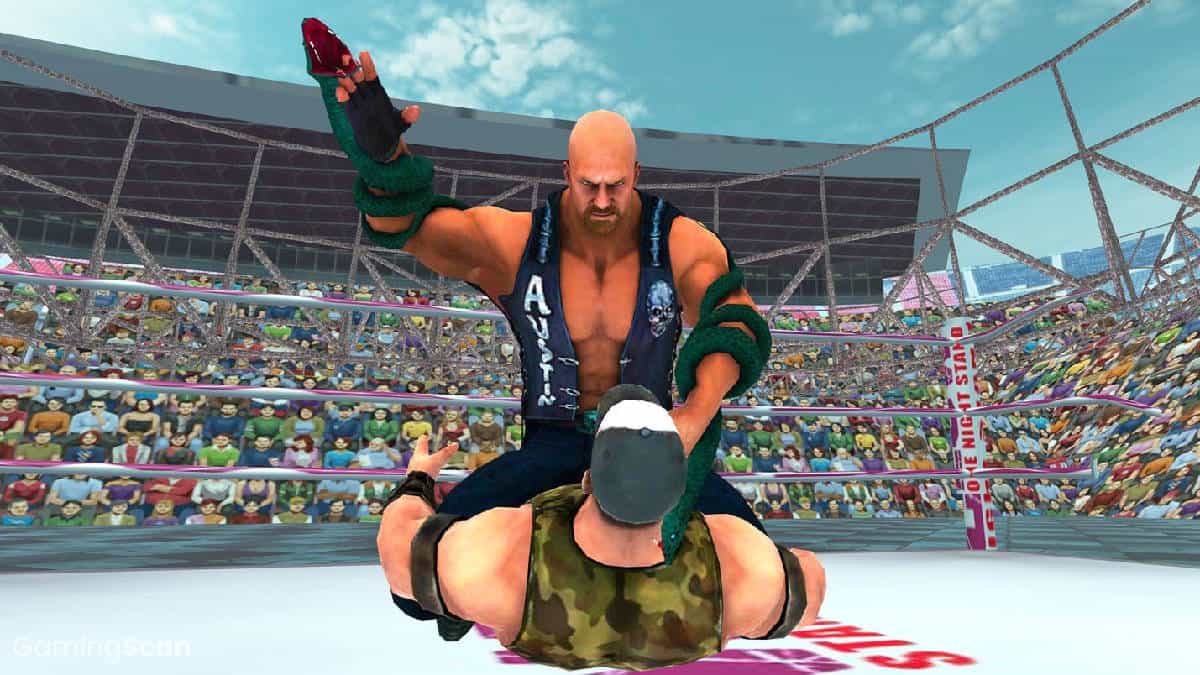 While wrestling may not be as well represented in gaming these days, there are still a ton of great new indie wrestling games that pay homage to classics like WWF No Mercy, Def Jam, and many more.

So whether you’re into officially licensed wrestling games with a roster of established fighters or more experimental wrestling games that aren’t afraid to break the mold, we’ve got you covered.

We’ll be updating this list in the future with new titles, so make sure to check back and let us know if we missed any of your favorite wrestling games for PC and console!

Created as a spiritual successor to the popular arcade game WWF WrestlingFest, RetroMania Wrestling features many familiar faces from the Golden and Attitude eras of wrestling.

This includes notable wrestlers like Tommy Dreamer, the Blue World Order, Jeff Cobb, and Nick Aldis of NWA among many others.

Despite releasing in 2021, the game has a distinctly old-school feel that’s reflected through its arcade-inspired 2D visuals, gameplay, and story mode.

Action Arcade Wrestling is an indie-developed wrestling game from VICO Game Studio that was created to fill the void left behind by WWE games.

Much like RetroMania, it serves as a throwback to arcade wrestling titles with gameplay reminiscent of retro classics like Night Slam Masters and Wrestle War.

To this point, the game features vibrant 3D cel-shaded graphics, over-the-top maneuvers, and 700+ hand-crafted animations across its 30+ character roster.

Players can expand this further by downloading a wide selection of community-made wrestlers and customize their own via the free Wrestle Lab Creation Suite.

Though licensed WWE games have fallen out of favor with wrestling fans of today due to their subpar quality compared to previous generations, WWE 2K19 is somewhat of a return to form.

It also happens to be considerably better than its successor, WWE 2K20, which is ridden with bugs and unpolished game features.

Next up is Circle of Sumo, a free-to-play sumo wrestling game with online multiplayer and competitive leaderboards.

In it, you take on the role of a Sumotori sumo wrestler and enter an assortment of crazy arenas to face off against opponents in physics-driven feats of strength.

Each match sees you competing with up to 3 players to be the last one standing, with five rounds determining the champion.

Circle of Sumo includes a ranked mode, distinct levels with environmental hazards, and a host of cosmetic items to make your character stand out.

Mark Out! The Wrestling Card Game

A bit different than the games we’ve covered so far, Mark Out is a wrestling card game that has you collecting, crafting, and battling your way up a competitive ladder.

It features a roster of 100+ collectible cards with unique stats and effects that can be combined to create your own deck and battle against the CPU and other players online.

Cards are depicted in 3D and feature fully animated wrestling moves that can be fused together to create new cards, upgraded, or shared online with other players.

While it doesn’t have as much action as your typical wrestling game, there are 10 playable arenas to explore and a ton of room for devising new strategies and tactics.

Released in 2017, Fire Pro Wrestling World is the latest and greatest installment in the Fire Pro series and boasts a huge variety of content.

This includes a wide selection of match types, a promoter mode, and over 1000 wrestlers that players can download and add to their own roster.

And thanks to Fire Pro’s realistic AI, you can adjust each wrestler and make sure they behave just like their real-life counterpart.

Combine this with timing-based gameplay that rewards patience and you have one of the most in-depth indie wrestling games with hours of entertainment.

MDickie is known for making old-school-inspired games that harken back to the golden era of wrestling games from the 1990s-early 2000s.

Wrestling Empire continues this trend while doubling down on the fun factor that makes each MDickie game easy to learn but hard to master.

It places a large emphasis on online multiplayer, allowing you to invite other players to custom matches with as many characters and props as you desire.

Additionally, it offers a career mode with up to 350 opponents spanning 10 different wrestling rosters along with a booking mode that tasks you with running your own promotions.

Speaking of booking modes, Pro Wrestling Sim is a text-based wrestling booking simulator that sees you organizing a wrestling promotion with superb control over the entire operation.

Players are put in control of their own show, deciding their roster, creating storylines, settling disputes, and determining who the winners and losers of each match will be.

The game features a Promise system in which workers will reward you for following through on their requests with continued loyalty.

Additionally, the game gives you the option to keep and edit your own database of wrestlers and promotions that can be shared with friends online.

One of the early titles in MDickie’s stable of games is Wrestling Revolution 3D, where players can step inside the ring and take on the role of a wrestler or work behind the scenes as a booker.

It offers the ability to create your own star and compete against 300+ wrestlers across 9 promotions with interconnected schedules.

While the graphics are rather dated by today’s standards, they’re complemented by a fantastic freestyle animation system that allows for fluid movement and interactive weapons.

Lastly, the game supports modding on PC, allowing players to insert custom images and music as well as bring their dream matches to life.

Before putting out a 3D version, MDickie released Wrestling Revolution 2D for PC and mobile devices.

In it, players create their own wrestler and embark on a career both inside the ring and behind the scenes as they learn the ins and outs of running a promotion.

Along the way, they’ll encounter 350 characters whose storylines evolve over the course of several in-game weeks.

While not a traditional wrestling sim, A Gummy’s Life satisfies a similar need to pummel your opponents across an assortment of whacky and colorful environments.

The general premise is that gummies have taken over the city and begun setting up impromptu wrestling matches in the local football stadium, parks, and more.

Taking control of a gummy, you’ll have to duke it out to the death using a variety of weapons as well as your bare candy fists.

There are also a host of unlockable cosmetics, several different game modes, and multiplayer support for up to 8 players online or locally.

Our final recommendation for wrestling fans is the indie classic Gang Beasts, in which colorfully clumsy contestants partake in a series of physics-driven showdowns.

Like A Gummy’s Life, the game doesn’t take itself too seriously and functions as a casual beat ‘em up where you and your friends can punch, kick, and launch each other across unique stages.

One level is set in an actual wrestling ring, with other options including a Ferris wheel, construction scaffolding, subway station, and more.

Even though the controls can feel rather unpredictable, the character customization is pretty cool and the random hazards are sure to catch you and your friends by surprise.

Fortnite vs Realm Royale – Which One Is The Best Battle Royale Game?
Related Topics Tags