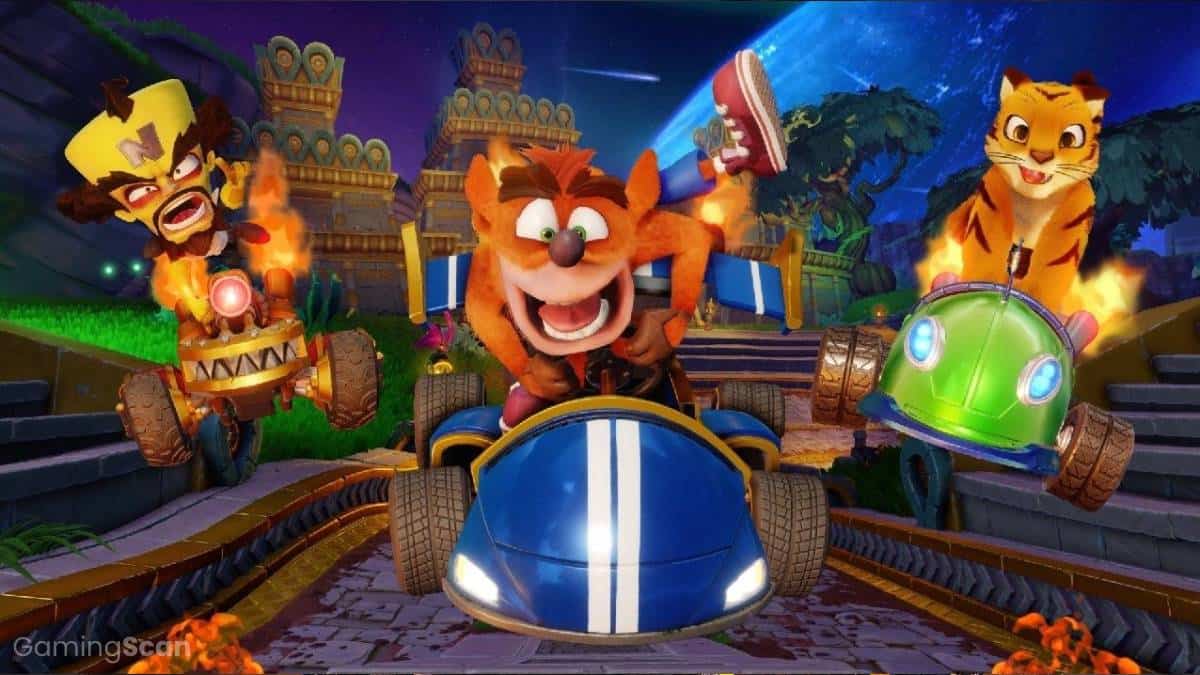 Released in 1999, Naughty Dog’s Crash Team Racing would go on to become a cult-classic despite Mario Kart’s dominance over the kart racer genre. While I was too young to truly appreciate the PlayStation title at the time, the few foggy memories I managed to retain into adulthood still evoke feelings of joy to this day. Therefore, I was extremely excited to get my hands on Crash Team Racing: Nitro-Fueled.

In an era where remakes are everywhere, and kart racers are limited to either Mario or Sonic, I was curious to see how Nitro-Fueled would perform. To complicate things further was the fact that the game had to live up to the expectations of seasoned fans while also appealing to an entirely new generation of players experiencing CTR for the first time.

As someone who falls somewhat in the middle of these groups, I found my time with Nitro-Fueled bittersweet. Developer Beenox has an unabated admiration for CTR, evident by the incredibly detailed recreation of tracks, characters, and racing mechanics.

However, their dedication to staying as close as possible to the source material only magnifies how outdated many of Nitro-Fueled’s concepts are. 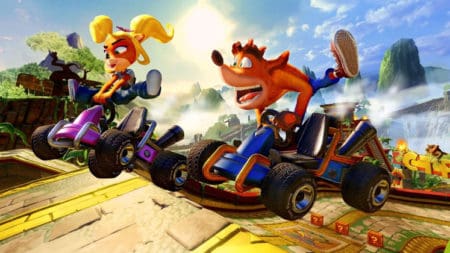 Getting Up to Speed

Given it’s been about two decades since the original CTR’s release, a majority of players will find themselves needing time to adjust to Nitro-Fueled’s controls, especially after spending years developing Mario Kart muscle memory. Karts all feel slightly faster, jumping and turning has a more tactile feel than MK 8, items are less viable, and drifting is much more demanding.

Here’s how it works: you hold down either L1 or R1 right as you’re about to turn to initiate a drift. As you hold down the button, a meter begins to fill, and the smoke from your kart’s exhaust will go from red to black, indicating you’re ready to boost, which is done by pressing the opposite of whichever button you’re currently holding.

Releasing too soon will cause the drift to fail while holding on for too long will result in you losing control of your kart and spinning out. However, releasing when the meter is at ‘Good’ will provide you with a small boost while releasing at ‘Perfect’ yields a large one.

Chaining together three boosts in a row provides you with a boost that’s even more powerful and has a longer duration. Mastering this part of the game was probably the most challenging part as it has a bit of a learning curve to it. Thankfully, Beenox has included the option to have your kart’s tires glow as your drift meter fills, giving you another clear visual indication as to when it’s best to let go.

Initially, I was put off by Nitro-Fueled’s controls, as they force you to commit to any action you choose to take – whether it be power-sliding around a big turn or jumping off a ramp for an extra boost heavily. Once you make a move, you’re forced to deal with the consequences.

This is drastically diverse from MK 8’s more laidback approach. However, after just a few races, I found myself having a blast with the flexibility and freedom Nitro-Fueled had to offer as it allowed me to pull off ridiculous feats and frequently reach speeds I didn’t think were even possible. 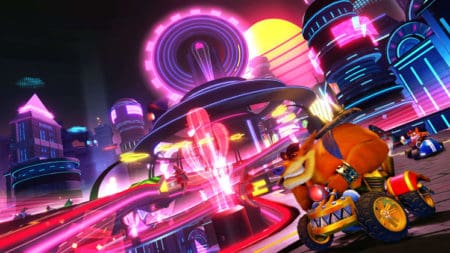 A Race Down Memory Lane

I started things off by heading over to Nitro-Fueled’s ‘Adventure Mode,’ as I thought it’d be the best place to unlock those vague memories I had of playing as a kid while also providing a decent slice of what the game had to offer for this review.

Here, you’re free to navigate through a hub world with portals to different tracks scattered around. Nitro-Fueled doesn’t do a great job of indicating which race you should complete to progress in the story. Therefore, in the early goings, I found myself replaying the same tracks to collect relics and obtain CTR tokens, the game’s currency for purchasing cosmetic items.

Once I had a firm grasp on the controls and overall flow of races, I found myself paying a lot more attention to the design of the tracks themselves, which are 31 in total.

These are all recreations of tracks from the original CTR and its 2003 sequel, Crash Nitro Kart. Each felt well-themed and sometimes added unique environmental challenges to races, such as slippery patches of ice on Polar Pass and small bodies of water that reduce speed in Mystery Caves.

My favorites ended up being tracks that had a lot of sharp turns, like Tiny Arena and Oxide Station, as they provided the most opportunities for drifting. However, Hot Air Skyway will always hold a special place as one of the most frustrating tracks ever created, right after Rainbow Road.

Nitro-Fueled’s vibrant environment is complemented by a cast of colorful and wacky characters that fans will recognize. The love and attention to detail that the developers put into the design of each racer are on full display during cutscenes, which are fully voiced and feature new animations.

Since Nitro-Fueled includes the option to switch racers at any point during the story, I found myself mainly rotating between my three favorites: Neo Cortex, Coco, and Ripper Roo.

While trying to finish first on increasingly complex tracks felt satisfying, Nitro-Fueled’s character challenges were anything but pleasing. These 1v1 races pit you against racers who have access to a specific item for the entire duration of the race, causing them to spam you with attacks and make it hard even to keep up. Let alone taking the lead.

Adding to the frustration is the fact that the game uses rubber-banding to prevent you from ever getting too far ahead, which feels extremely cheap in today’s gaming climate. 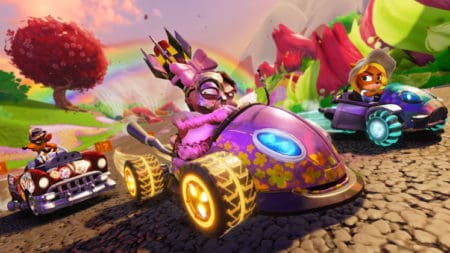 Pimping Out Your Ride

Nitro-Fueled’s customization manages to strike the perfect balance between the old school approach of unlocking skins just by playing the game and today’s, which is often tied to shelling out real-world cash.

Aside from some pre-order bonuses, every character, skin, and car customization item can be purchased using in-game currency.

There’s a decent selection of different options for each character and even more options for customizing your kart, with multiple bodies, paint jobs, tires, and stickers to slap on that bad boy.

To purchase items, you have to navigate through the main menu and select the in-game shop, which rotates every couple of hours to include a new selection of items.

Although I didn’t mind the shop’s layout, I found it irritating the necessity to back out of the mode you’re currently playing in, just to see what’s on offer and if you can afford it. Additionally, some items seemed a bit over-priced, requiring you to save up several thousands of coins.

I thought Beenox’s decision to support both local and online multiplayer was an excellent call at a time when couch co-op seems to be fading away. While I didn’t get a chance to race against friends locally, I spent some time competing online.

Here you’ll find two racing types to choose from. There are races, which play as you’d expect, and battles, which see players competing in a variety of modes ranging from staples like ‘Capture the Flag’ to ‘Last Kart Standing.’ In these, players attempt to knock out opponents with a limited number of tries.

While I found standard races enjoyable, partially because of how unpredictable other human players can be, battles weren’t as fun as I thought they could be.

A majority of modes seemed to tack on objectives that didn’t fit well with Nitro-Fueled’s controls, often requiring you to perform a lot of precise and gentle maneuvers.

To my surprise, I had a lot of fun just waiting in the lobby between races and checking out how other players had tricked out their rides. 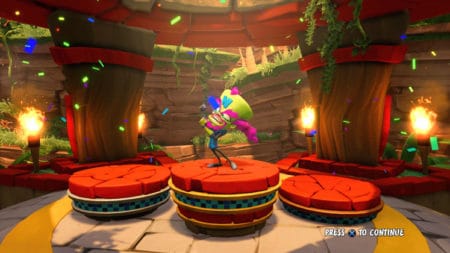 I believe that a remake shouldn’t set out to be a 1:1 recreation, but rather attempt to capture how fans remember the original feeling. In this regard, I think Beenox did a phenomenal job and provided players with an updated version of a cult classic.

However, by staying as faithful as possible, they’ve also put a spotlight on many of CTR’s flaws. And although Nitro-Fueled is just as fun as most of us remember, it never manages to escape from feeling like a video game relic from a generation that has long passed.