Hot the heels of the triumphant 2016 reboot of Doom, id Software is eager to get fans back into the distinctive, demon-filled havoc with upcoming sequel Doom Eternal. Early indications suggest Doom Eternal is set to follow in the similarly irreverent footsteps of its predecessor and offer an equally gruesome, slaughterous current generation Doom experience.

The anticipation surrounding Doom Eternal is such that the title bagged the coveted ”Most Wanted Game” at the 2018 edition of the respected Golden Joystick Awards.

So what’s in store for Doom Slayer this time around? When can we expect Doom Eternal to hit store shelves? All is revealed below in our condensed summary of everything you need to know about Doom Eternal. Let’s get into it. 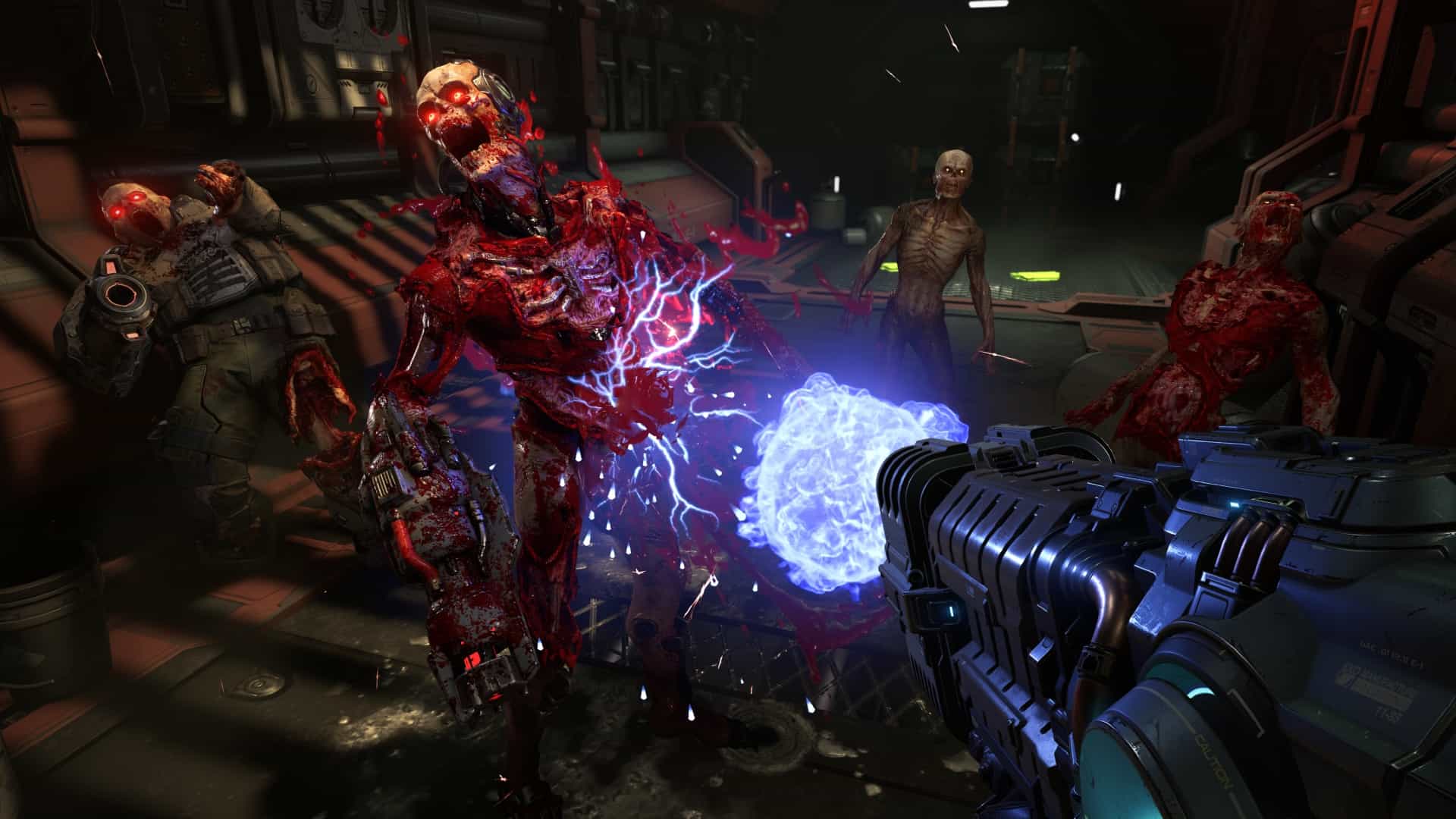 Publisher Bethesda announced Doom Eternal at E3 2018 to chunky, distorted guitar licks and characteristically grisly demonic fanfare. However, the game has yet to be assigned a release date.

An Amazon listing at the time displayed a release in late December 2018. Alas, we weren’t destined to dive back into the wanton violence and gore of Doom quite so soon. The date was nothing more than a placeholder – a common practice among big distributors.

The Doom Eternal gameplay revealed at QuakeCon 2018 suggests that development is well underway, hinting at a release in the not too distant future. The game looked not only highly functional but in a polished state.

We must, of course, take such reveals with a pinch of salt given they are glossed over for the precise purpose of enticing players and oiling the axles of the hype train. The demo was nonetheless a good indicator of the state of the game. 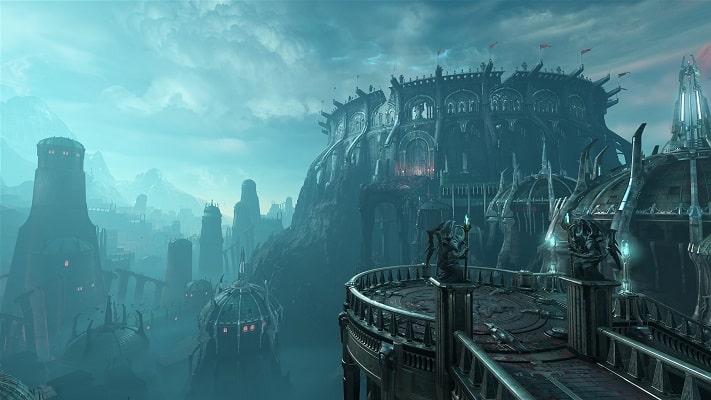 A quick look at Bethesda’s release schedule for 2019 does provide hints about when Doom Eternal is likely to drop. With not only Rage 2, but also Wolfenstein: Youngblood releasing in 2019, the release of Doom Eternal may be contingent on how many first-person shooters Bethesda is willing to drop in the same year.

The publisher has also been busy recently with Fallout 76, Quake Champions, and a Switch port of Wolfenstein II: The New Colossus. It’s feasible Bethesda may want to put the brakes on to avoid saturating its player base’s demand for new titles.

Add to this the fact that id Software is working on Rage 2 and Doom Eternal simultaneous. With Rage 2 above Doom Eternal in the release pecking order with a concrete date set for May 14th, 2019, the allocation of resources likely matches the same hierarchy within the studio.

Bethesda has confirmed Doom Eternal will be available for PC, PlayStation 4, Xbox One, and Switch.

The first Doom Eternal trailer dropped on June 10th, 2018 during E3 and represented the official announcement for the game. Through and through a cinematic experience, the trailer depicts a familiar rendition of Hell populated by mutated aberrations as terrifying as the next, some of which fans of the franchise will recognize such as the Arachnotron.

Semi-collapsed tower blocks engulfed in roaring flames burn menacingly on the horizon drenched in ominous dark clouds. The trailer culminates with the appearance of Doom Slayer as a handful of demonic enemies appear seemingly out of nowhere synchronized to a rising crescendo of chugging guitars in true Doom style.

Although not technically a trailer, the following footage from QuakeCon 2018 unveiled the first look at Doom Eternal gameplay nestled among the antics Bestheda’s stage show. The footage is broken down into three distinct segments each depicting a particular aspect Bethesda was eager to show the world.

In keeping with 2016’s Doom, the gameplay is frantic, obscenely brutal, and exaggerated as we’d expect. The demo tracks Doom Slayer as he lays carnage to the ruins of a crumbling Hell, marauds through a network of chambers and corridors picking off an increasingly stomach-churning selection of daemons in a whirlwind of gunfire, decapitation, and violence. The final segment transports us to the Martian moon of Phobos where things get even messier until the grand finale and the appearance of a fire-wielding monstrosity. 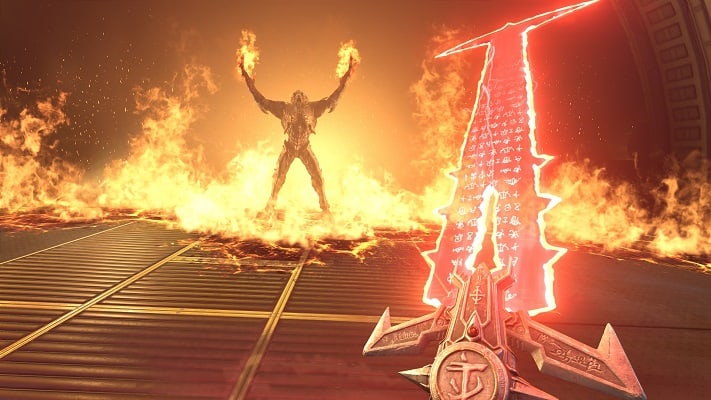 To commemorate the 25th anniversary of Doom, Bethesda has birthed an exclusive community of sorts dubbed the Slayers Club. Membership grants a platform to celebrate Doom in all its glory with lots of content to come according to the website blurb and also bags anyone who signs up an exclusive Zombie Doom Slayer skin in Doom Eternal.

In other news, Bethesda’s QuakeCon 2018 shindig revealed that alongside more traditional modes a new multiplayer component is being introduced to Doom Eternal, dubbed the Invasion mode. Invasion allows players to join someone’s single player campaign session and hunt them down in demon form. The concept is very similar to Dark Souls and is sure to produce intense human-controlled demon vs. Slayer matchups.

id Software is developing the multiplayer features in-house this time around to ensure a deeper, more rewarding experience for players, while post-launch DLC content for both single player and multiplayer is on the cards as well.

Popular consensus is that id Software and Bethesda are hoping to apply the same multiplayer-focused treatment as Fallout 76 to Doom Eternal with regular updates and a possible persistent multiplayer space. 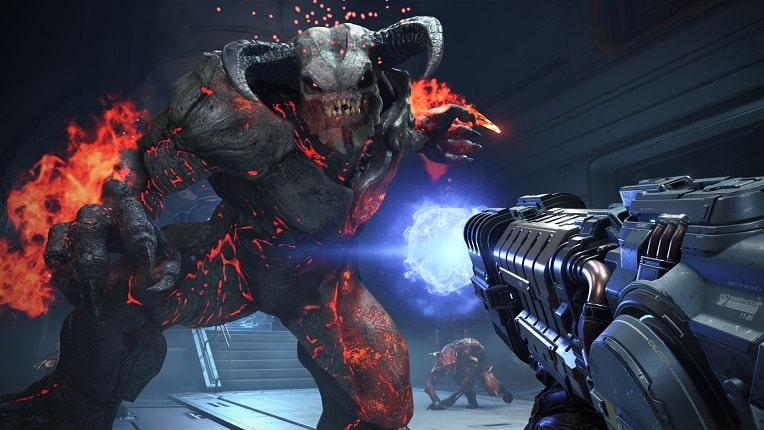 The Doom franchise isn’t exactly lauded for its story even though successive games have offered a rich palette of post-apocalyptic storytelling madness.

Canonically, Doom Eternal is a direct sequel, but id Software has emphasized its desire to create a ”Doom universe” instead of a simple continuation of the foundations laid out in 2016’s Doom. The plan is to expand the narrative elements for a more compelling experience.

Doom Eternal sticks to the ravaged, demon-infested earth setting and humanity’s last stand to secure a source of energy, which invariably ends up in unquestionably disastrous deals with the demons while simultaneously helping the devil spawns in their quest to take control of earth. The player once again jumps into the shoes of the indomitable Doom Slayer suggesting the story won’t pick up too far from where Doom 2016 ended.

The game will also visit a facility on the Martian moon of Phobos housing the gargantuan BFG 10,000 super weapon as well as other yet to be revealed locales and ”ancient secrets of the Doom universe’. 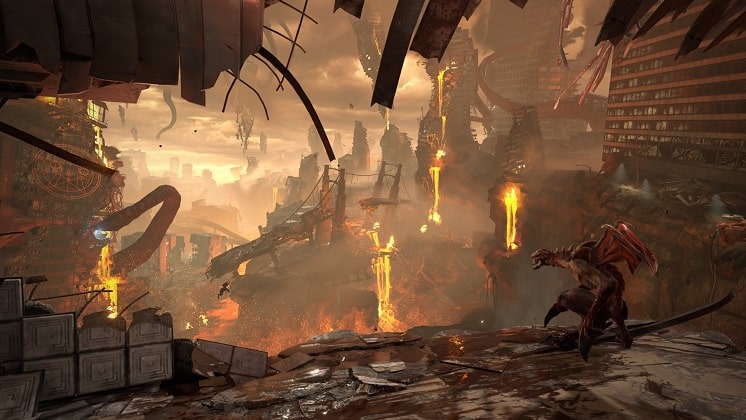 From what we’ve seen, Doom Eternal takes everything we adore about the bloody massacre of previous games and finesses it for a faster, slicker, and more satisfying whole. Aggression remains central to the gameplay loop with constant movement and engagement defining the overwhelming majority of the game.

id Software is hoping to achieve this by arming Doom Slayer with an arsenal of new gear, weapons, and attachments. Slayer’s armor receives a fresh lick of paint with upgrades to boot, as well a shoulder-mounted cannon sporting a retractable demon-butchering blade, grenade launcher, and flamethrower. The armor also boasts a dash ability for faster movement, allowing the Doom Slayer to climb certain vertical obstacles that were previously out of bounds.

Of equal interest is the Super Shotgun equipped with a meat hook attachment. This glorified grappling hook transports the Slayer at breakneck speed towards their target for a swift up close and personal kill or traversal to different areas for increased navigation across the various worlds.

Other additions include a demon-spearing ballista, the crucible blade, and the return of favorites like the rocket launcher and plasma rifle.

Doom Eternal sees many familiar demons return such as the Pain Elemental, Archvile, and Aarchnotron, but also introduces fresh additions such as the Doom Hunter and Marauders.

The gameplay from QuakeCon does an excellent job of showcasing these enemies each with unique death animations, tactics, and weaponry. The ‘destructible demons’ system means enemies will explode, disintegrate, vaporize, and so on in creative and unique ways as they take on damage.

Building upon what made 2016’s Doom reimagining such a pivotal success, id Software and Bethesda are wisely injecting faster and bloodier gameplay into Doom Eternal.

For a formula that works so well, and has done so for the past 25 years, there’s not much you can do wrong by sticking to the basics with a few flourishes here and there.

We should undoubtedly hear more in the coming months, notably concrete release details and hopefully a few more gameplay trailers.