Since 2012, Ubisoft has been churning out near yearly installments of its long-running Far Cry series and 2019 is set to follow in these established footsteps.

With Far Cry New Dawn, the developer is once again diving back into an expansive open-world beset by colorful characters and explosive weaponry. But this time around, Ubisoft is turning its focus towards raucous, irreverent FPS rampaging across a lush, alternative take on the familiar post-apocalyptic setting.

Here’s everything we’ve been made privy to so far about Far Cry New Dawn. 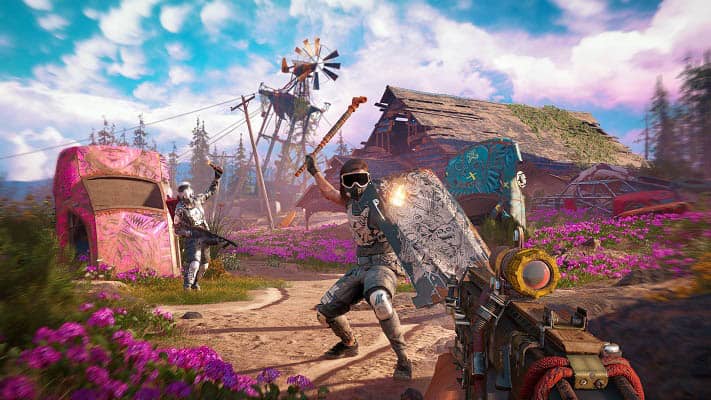 Far Cry New Dawn releases on February 15th, 2019. The turnaround from announcement to release is exceptionally speedy given the game was announced at The Game Awards in early December 2018.

Ubisoft has gotten into the habit of releasing standalone sequel/spin-offs based on the stories and maps of the mainline entries since the days of Far Cry 3. Blood Dragon is a retro-futuristic 1980s sci-fi parody of Far Cry 3, while Far Cry Primal takes Far Cry 4 and catapults it back to the Mesolithic Age. Far Cry New Dawn jumps on the bandwagon with the same setting and a narrative continuation of Far Cry 5.

The stories in these spin-offs are much shorter, bite-sized, and light-hearted affairs, but pack enough new variety, characters and intrigue to warrant a shot. The significantly reduced price tag is nothing to scoff at either.

The timing isn’t bad either given the underwhelming response to Bethesda’s most recent gaming foray into a post-apocalyptic setting of Fallout 76. Dissatisfied players may find solace in the more upbeat Far Cry New Dawn. 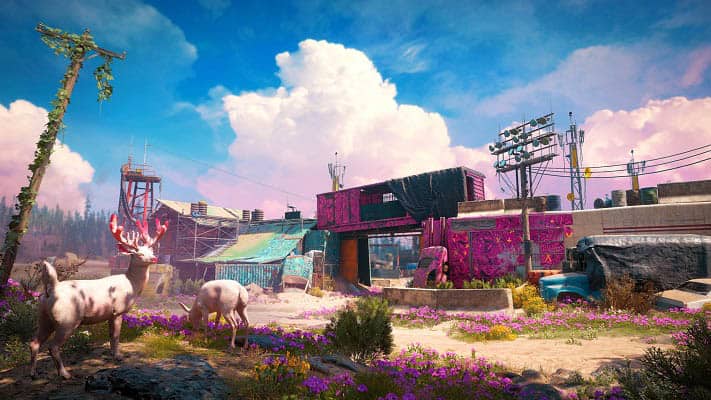 In a video released in conjunction with the teaser reveal at The Game Awards, Ubisoft explains that it has been keen to explore the post-apocalyptic setting for a while and apply its own ”Far Cry spin”. Far Cry New Dawn is Ubisoft bringing this ambition to fruition.

If you’re in the market for the Deluxe Edition, your extra pennies score you the Knight Pack (SVD Claymore rifle and sidecar motorcycle) and the Hurk Legacy Pack (Wrath M249, legacy offroader, and Hurkling outfits) as well as an M133M shotgun and RAT4 rocket launcher. Pre-ordering either the above or the Standard Edition secures the Unicorn Trike vehicle.

Characters from Far Cry 5 are making an appearance in New Dawn with fresh insights into how their lives have changed since surviving the nuclear catastrophe. Players familiar with the previous title will be pleasantly surprised by the selection of returning characters, Ubisoft says.

Guns for hire return as do fangs for hire with a brand new dog called Timber, who can tag along in vehicles, and Horacio, a wild boar. That’s right; players will be able to gallivant across Hope County accompanied by a domesticated 350 lb pig.

Ubisoft kicked off the trailer pageant with a teaser for the worldwide reveal during The Game Awards released on December 5th, 2018. Short and snappy, the teaser appears to be a juxtaposition of live action shots and engine-rendered scenes. An amuse-bouche for the meatier reveal, the teaser introduces the post-apocalyptic setting and a world as beset by brutality as Far Cry 5.

Fast-forward to the next day, and The Game Awards were wowed by the official world premiere gameplay trailer. We were introduced to the dual antagonist twins and given some background on the motivations behind their merciless thirst for power. 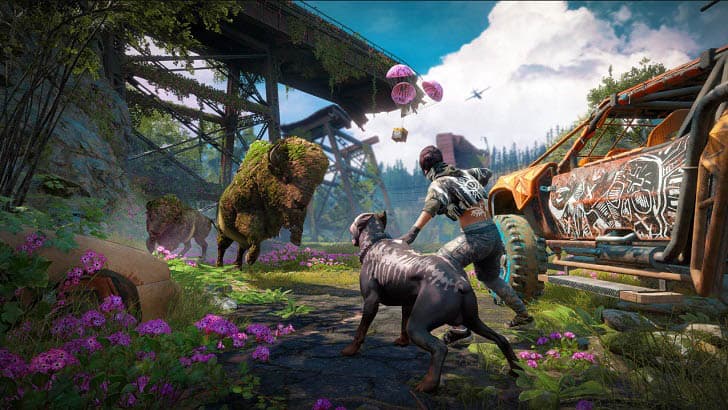 Describing the story behind Far Cry New Dawn is an odd exercise in that the basic premise of the game picks up from the culminating moments of Far Cry 5 and by extension involves spoilers. If you’ve yet to complete Far Cry 5, then avert your eyes now, spoilers ahead.

Far Cry New Dawn takes place seventeen years after the nuclear tit for tat calamity that befell Hope County, Montana at the end of Far Cry 5. In a lateral move away from the usual post-apocalyptic trope of bleak survival and a ravaged landscape, Hope County’s natural world is undergoing a renaissance, or as the official blurb coins it, a ”super bloom” as nuclear winter loosens its suffocating grasp. After successive periods of heavy winds and life-giving torrential rains that reshaped the hills and valleys, nature is reasserting itself with verdant force.

Instead of a drab palette of radioactive remnants and somber tones, Hope County positively explodes with color and the vibrant re-emerging life. In an uncanny similarity to the upcoming Rage 2, the predominant color is explosive neon pink. From lush floral blooms to the makeshift abodes of survivors and even the antlers of roaming deer, everything’s bathed in glorious, abundant shades of pink belying the instability and threats rampant across Hope County.

As nature continues its steady march forward to reclaim the land, the survivors have fractured into various peaceful groups, each surviving in their unique way, yet hopeful of a bright future. New, ramshackle shelters adorn the landscape in small pockets pulled together from the remains of a dormant past. Survivors craft weapons, vehicles, and tools from salvaged materials – not the most visually enticing set of gear, but useful nonetheless. 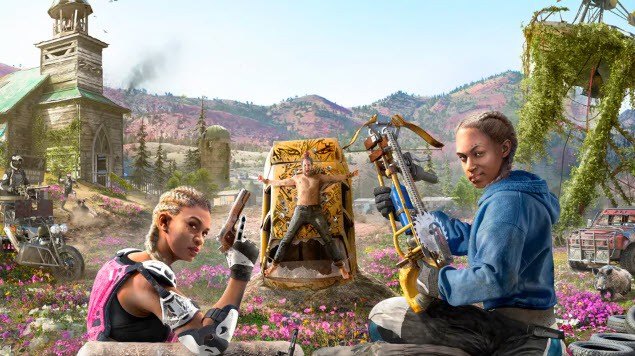 However, these groups are on a collision course with a roaming horde of scavengers known as the Highwaymen. Spearheaded by the formidable twin sisters Mickey and Lou, the Highwaymen are making their way across the US stealing, killing, and looting at every opportunity.

Mickey and Lou aren’t your run-of-the-mill set of twins. They’ve grown up knowing nothing but the unrelenting challenges of a world devastated by nukes and are both mentally and physically equipped to handle anything it throws their way, whatever the cost. Mickey is the brains of the operation while Lou provides the impetuous muscle. Together they form a ruthless duo intent on bleeding dry any settlement they come across.

With Hope County next on the twins’ list, the survivors have put out a call to arms to form an alliance and deal with the imminent new threat from the East. In steps the player to battle against the Highwaymen and the twins. 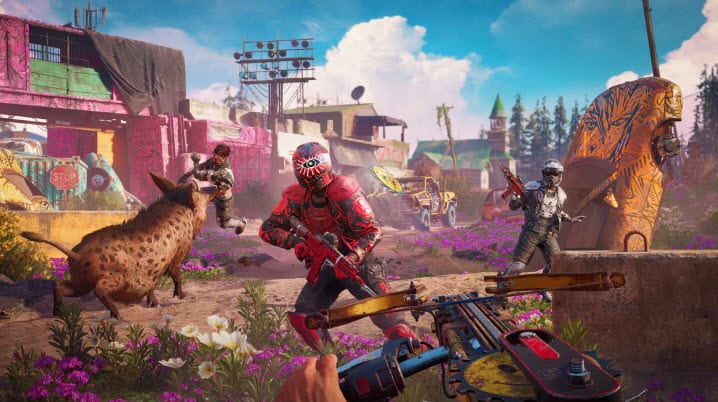 Far Cry New Dawn adheres to the classic Far Cry gameplay pattern of gunplay, missions, and quests all based out of a fortified home base named Prosperity, which players will rebuild as the game progresses. Prosperity is inhabited by NPCs who will help craft makeshift weapons and gear, but it’s also where players can train companion characters and hold prisoners.

Prosperity is also the hub from where players can embark on Expeditions; forays into memorable and drastically different closed-map areas scattered across the US and outside of the core Hope County zone. Expeditions are an opportunity for players to witness how the nuclear cataclysm affected other areas.

The locations range from a theme park to a canyon zone and wetlands. Ubisoft says they are large spaces measuring upwards of 1km2. The objective of Expeditions is to weaken the advance of the Highwaymen and gather crafting materials to improve weaponry and vehicles.

Ubisoft’s standalone Far Cry spinoffs were generally well received and lauded for reinventing the core games into a more entertaining and playful package. Far Cry New Dawn seems prepped to do very much the same.

If you’ve yet to finish Far Cry 5, it might be time to dust off your copy and complete the storyline in anticipation of Far Cry New Dawn.