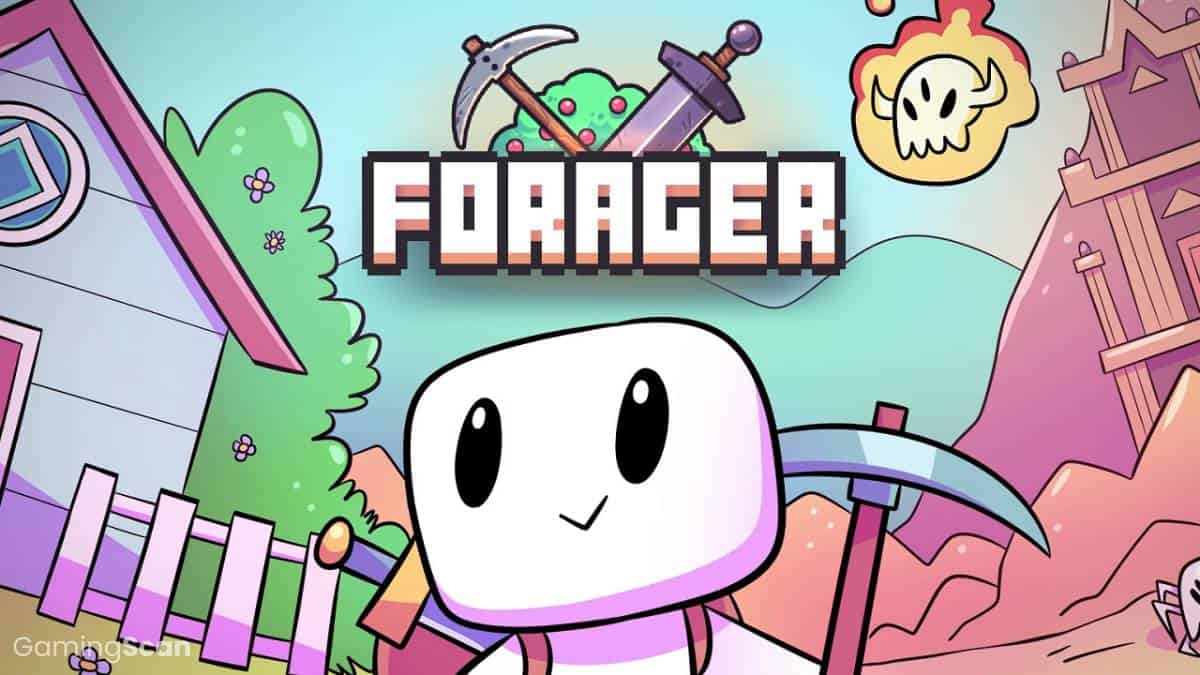 As someone who regularly plays a lot of video games, I can typically identify what look and feel a game is going for within the first ten minutes or so. Is it a cinematic first-person shooter or a challenging action platformer?

Is it trying to get me to spend money on microtransactions? Is it somehow copying Angry Birds? These are just a few examples that come to mind.

However, when I sat down to play Forager for the first time, the part of my brain associated with game-critiquing seemed to magically disappear as I became increasingly entrenched in its insatiable gameplay loop. The one-person indie passion project developed by Mariano Cavallero, aka HopFrog, invites players to explore a bright and poppy 2D world as they farm, collect resources, craft items, unlock new skills, and discover different biomes.

Publisher Humble Bundle has teamed up with distributor Nighthawk Interactive for a retail release, which includes a physical copy of Forager along with some goodies—a poster and five stickers depicting characters and environments from the game, all of which are adorable.

I received a copy of the PS4 version for this review; however, you can also pick it up for Nintendo Switch at all major North American retailers.

When you first start playing Forager, you may not think much of it. After all, a majority of the game is spent simply smashing trees, rocks, enemies; you name it. You control a chunky little pickaxe-wielding character who manages to feel charming without saying a single word. The first environment you’re presented with is a meager patch of grassy land where clusters of trees, stones, and enemies will randomly spawn.

By this point, you may be about ready to check out; there is an abundance of survival crafting type games out there, many of which are either more popular (Minecraft) or at least look more “pretty” (Stardew Valley). However, if you can get past that first initial hurdle, you’ll be rewarded with a deceptively simple and highly rewarding experience.

How do I know you’ll love Forager? Well, there’s the fact that I haven’t been able to put the game down since that first night, with most of my sessions lasting anywhere between 5-8 hours, something I haven’t experienced since playing Battle Chef Brigade, another addictive 2D game. This all stems from a well-designed, albeit simple upgrade system that can effectively change how you play the game.

In Forager, you’re awarded experience, or XP, for smashing, crafting, and later on eating food. Once you’ve gained enough experience to level up, you’re able to unlock a new skill that can help speed up a particular part of gameplay and even unlock completely new gameplay mechanics—enemies getting you down? Well, now you have a chance to replenish health whenever you kill one, tired of smashing everything with your pickaxe? Try using magic; Workbenches taking too long? Production time is now reduced by 50%!

The desire to unlock every one of these skills is ultimately what kept me playing since you have to unlock one skill to reveal those adjacent to it. However, just as satisfying as discovering these skills was seeing how much they impacted my overall experience, often getting me one step closer to creating a fully automated village.

Resources in Forager all spawn at an extremely generous rate, which drastically reduces the amount of time it takes to grind out enough materials to craft whatever it is you’ve set your eyes on. This could be a suspiciously-slimy new pickaxe with better stats, a backpack that expands your inventory space, or a water shovel that produces irrigated patches of dirt without needing a watering can.

In addition to unlocking new tools and abilities, there is a myriad of crafting stations dedicated to different tasks within the game, such as farming, cooking, manufacturing, mining, and more. Whenever you feel like you’ve exhausted your current options in one field, there’s another waiting to be explored.

This same approach is used for unlocking new biomes in the game’s open-world. Your character uses gold coins, which can either be earned by smashing enemies and rocks or crafted using the Forge, to unlock new sections of land, eventually reaching a completely new biome. Each environment is visually distinct and introduces new enemies along with new resources to forage.

The game offers a great deal of freedom to the player, allowing you to set your own goals based on your desired playstyle. Maybe you enjoy farming and cooking more than exploring. Or maybe you want to craft the strongest tools in the game or live attachment-free as a nomad, traveling from biome to biome. While there’s enough room to focus on a specific activity, you’ll have a much more well-rounded experience if you dive headfirst into everything Forager has to offer.

This is how I initially started playing the game, and it managed to keep me hooked for the first 10-15 hours. After that, I found myself gravitating towards certain activities, namely mining and discovering new biomes. I personally found that more stationary activities, like farming and cooking, didn’t really mesh with the game’s emphasis on exploration.

Although crafting/survival sandboxes come a dime a dozen nowadays, there’s a certain allure to Forager’s simple controls and basic gameplay. Aside from fulfilling every idle game lover’s dream of a fully-automated world, the game keeps things interesting by assigning abilities, tools, and workbenches to different unlockable skills. However, this is only one of many “chases” that Forager uses to keep players hooked.

Whether it’s saving up enough gold to unlock a new piece of land, seeing what happens when you kill sentient radishes, or baking 500 loaves of bread simply because you can, Forager provides plenty of opportunities to experiment and more times than not, discover something new in the process. While its 2D visuals may not appeal to everyone, pick up a controller and you’ll soon find yourself unable to put it down. I should know, I’m one of the many victims whose lives have been forever claimed by Forager’s addictive gameplay and charming open-world.