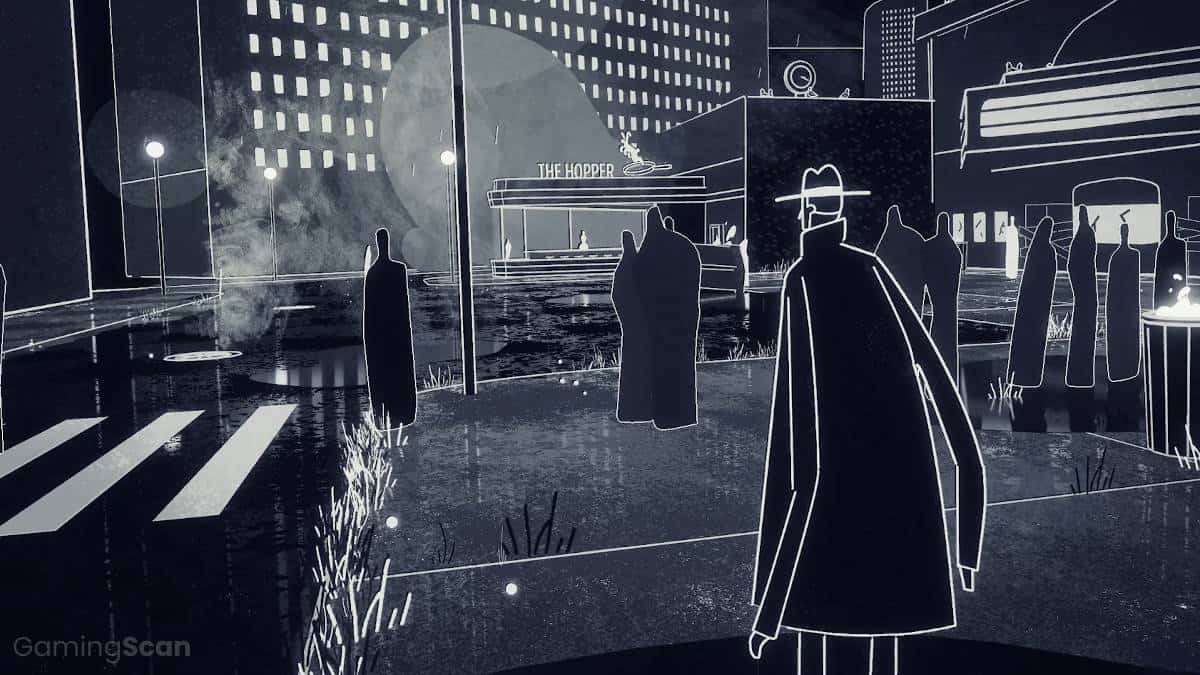 There were a lot of great game trailers shown during E3 2019. However, one, in particular, has clung to memory. It was a brief minute-twenty seconds long video for Genesis Noir, an upcoming adventure game from indie developer Feral Cat Den.

Here, we’ll be covering everything you need to know about the upcoming indie game, including its release date and the latest news regarding story and gameplay. Make sure to check back as we’ll be updating this story following any new announcements.

When will Genesis Noir Release?

Although the developer hasn’t provided us with a confirmed release date, rumor has it Genesis Noir will launch in early 2020. It’s currently in development for PC, Mac, and Xbox One with the possibility of a Switch release in the pipeline. At launch, the game will also be available for Xbox Game Pass subscribers.

Feral Cat Den is a small two-person studio located in New York City. They’ve partnered with Skillbard, a team of composers/sound designers based in London, to create the game’s music and sound design.

A short story from the game’s developers describes how Genesis Noir came to be:

“In Genesis Noir, you’ll meet a musician. In fact, you’ll meet several musicians – a bandleader named Golden Boy, an alluring jazz singer named Miss Mass; you’ll even become a bit of a musician yourself. This musician you encounter is an amalgamation of the buskers New York is full of. They embody the musicians of incredible talent whose art stays with you, but also are inspired by plenty of performers with questionable talent.”

The game uses pulpy, abstract storytelling to set up its world and characters. At the heart of it all is a love story centered on three unique individuals. Miss Mass is a jazz singer who men find irresistible; Golden Boy is a self-obsessed bandleader with a destructive nature; and lastly, No Man is a watch salesman trapped in a monotonous life who serves as the game’s protagonist.

Controlling No Man, players are taken on a sci-fi noir adventure taking place before, during, and after The Big Bang, depicted in the game world as a cosmic gunshot fired by Golden Boy at Miss Mass.

While things get a bit vague after that, it’s safe to assume this is a love triangle gone awry, with No Man and Miss Mass in love, much to the dismay of Golden Boy.

Set off by feelings of anger and jealousy, he takes a shot at Miss Mass, which alters the entire universe, transporting No Man to different states of reality. The player’s journey will see them exploring a dark metropolis, dense forests, and inter-dimensional plains as they try to undo the effects caused by the Big Bang.

So how exactly do all these fancy metaphors and stylish visuals connect to Genesis Noir’s gameplay?

Well, as an adventure game, Genesis Noir emphasizes exploration and simple interactions with objects found throughout its world. In the trailer, we can see a few examples of what appears to be a series of mini-game puzzles.

These include playing the saxophone while another character plays the cello, using a rotary phone dialer, and analyzing a sunflower for any patterns.

Most appear to have open-ended solutions and are more about creative expression rather than “winning.” There’s a certain kind of satisfaction that comes with being able to manipulate an object in a game with little to no restrictions, which Genesis Noir appears to embrace fully.

These puzzles are spread throughout the numerous 2D/3D environments you’ll be wandering around along with cosmic clues that can help you prevent the Big Bang from ever happening.

The Final Word on Genesis Noir

Indie games have become the go-to for experimental storytelling and gameplay mechanics. At a time when most big studios are desperately clinging to a specific formula or genre, it’s refreshing to see a studio like Feral Cat Den doing the opposite.

The personal experiences and interests of the developers appear to be on full display in Genesis Noir, and we’re eager to see what else do they have in store.

When will that be? We’re not entirely sure. However, like any good mystery, we’re sure to find out the answer sooner rather than later. For that reason, we encourage you to check back for any announcements from the developer.

In the meantime, we recommend checking out our list where we highlight the Best Upcoming Indie Games.