Ghost of Tsushima is an upcoming PlayStation exclusive that has you exploring a beautiful and immersive open-world in the form of feudal Japan. Developed by Sucker Punch, makers of Infamous, the game casts you as Jin Sakai, a highly-skilled samurai and one of the last remaining survivors on Tsushima Island during a Mongol invasion. It’s a massive shift in tone for the studio that offers a closer look at medieval Japan from the perspective of a warrior trying to save his homeland.

Here we’ll be diving into the latest news and rumors surrounding Ghost of Tsushima as well as detailing the game’s anticipated release date. We’ll be keeping this story updated following any official announcements from Sony PlayStation or Sucker Punch, so make sure to check back for the latest news on the upcoming PS4 game.

UPDATE: A recent PlayStation blog confirmed Ghost of Tsushima will release on June 26, 2020, for PS4.

We got our first glimpse of Ghost of Tsushima when it was announced during Sony’s Paris Games Week event back in 2017. No official release date was offered at the time of the game’s announcement but current rumors suggest Ghost of Tsushima will release Summer 2020 for PS4, with the possibility of a PS5 release as Sony gears up for the next console generation.

The game is one of many “swan songs” for the PlayStation 4, accompanied by other highly-anticipated exclusives like The Last of Us 2 and Final Fantasy 7 Remake. It’s unknown what Sony has plans to do with these titles and whether or not they’ll go on to become “cross-gen” games or simply remain trapped on the old hardware. However, what we can say for sure is that Ghost of Tsushima aims to push the PS4’s capabilities to new heights while delivering a cinematic experience to players.

Ghost of Tsushima Story and Setting

Ghost of Tsushima takes place on a fictionalized version of Tsushima Island, Japan amidst the first Mongol Invasion during the year 1274. In an interview with GamesRadar, Sucker Punch Game Director Nate Fox explained the decision for the game’s setting, “When we hit upon the Mongol invasion of Tsushima of 1274, it all clicked. Suddenly you knew who the heroes were, who the villains were, what the stakes were for the world, and you had a video game.”

In terms of historical accuracy, the studio is hoping to deliver an authentic samurai fantasy but not a literal depiction of real-life. To that point, the characters and story should be regarded as works of fiction whose creation is inspired by historical figures and events in human history.

You’re cast as Jin Sakai, a deadly swordsman and the last line of defense against hordes of invading Mongols. However, you’re not the only survivor looking to save Tsushima from falling into enemy hands, as along your journey you’ll meet potential allies who can aid you in battle.  One such ally is Masako, a proficient archer who first appeared in an E3 2018 gameplay debut.

Teaming up with Jin to retrieve a monk being held hostage by a group of Mongol soldiers, the pair’s allegiance comes to a screeching halt when Masako reveals she wishes to slaughter the monk as revenge for him betraying her family. They ultimately face-off in a katana-fueled duel while a group of Mongol soldiers can be heard approaching from a distance and shooting flaming arrows.

While we’re not expecting every one of Jin’s allegiances to be this rocky, exposing players to companions with their own motivations that may differ from Jin’s is an interesting story element that’s likely to resonate with the player. It’s unclear how many allies will be included in the final game but we anticipate they’ll each bring something valuable and unique to the experience when it comes to gameplay and narrative, potentially having their own line of NPC side quests.

It appears Sucker Punch intended for Ghost of Tsushima to be an open-world game from the jump, according to an interview with US Gamer highlighting the studio’s game design philosophies regarding player-choice and what impact it should have in relation to gameplay and story. To that point, the team has made some bold decisions in order to offer players as much freedom and immersion as possible in Ghost of Tsushima.

Included in these features is a toggleable HUD which can be switched off for a more visceral experience. Additionally, the game will not have a waypoint system for traversing the open-world. This allows you to explore and discover locations organically by walking or while riding your trusty horse. While we interpret this to mean Ghost of Tsushima’s environments won’t be as massive as other big-budget open-world games, expect a good amount of varied and meticulously-crafted areas ranging from wide-open fields to dense forests to mountainous landscapes.

As a samurai, Jin is a trained expert at close quarters combat using a sword and can efficiently slice his way through enemies even when he finds himself outnumbered. He has the ability to counter incoming attacks by deflecting them with his sword before performing a flashy execution. While exploring the open-world, you’ll come across groups of Mongol soldiers who will attack Jin with swords, spears, shields, and a bow and arrow if they detect you.

This is where the game’s stealth mechanics come into play as some scenarios will require you to successfully infiltrate an enemy’s base or slip past a Mongol patrol undetected. In order to reach out of the way areas and access certain vantage points, Jin can use a grappling hook to climb walls. The hook can be thrown at any moment mid-jump, making it an extremely valuable tool.

While stalking enemies from above or below, you can trigger lethal takedowns that can be chained together by highlighting enemies during slow motion. Of course, this is one of many tricks in Jin’s arsenal as over the course of the game he’s forced to shed some of his traditions in favor of new strategies belonging to the “Way of the Ghost”. By the end of it all, expect to be a one-man wrecking crew capable of picking apart enemies with ease.

The Final Word on Ghost of Tsushima 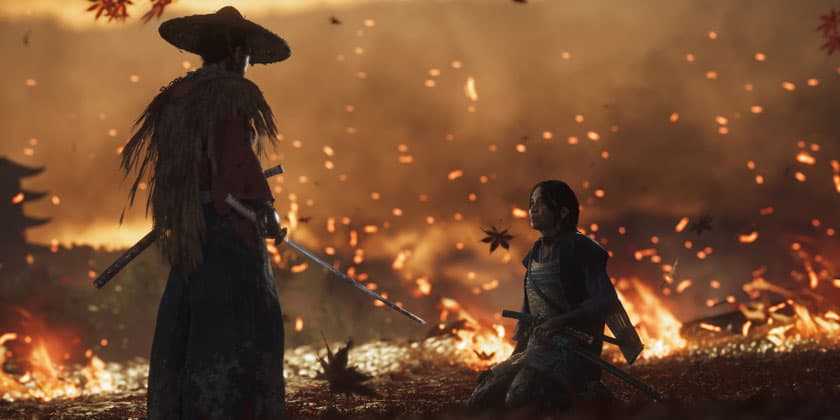 By this point, it’s safe to say that Sucker Punch has a fascination with crafting vibrant open-worlds that feel truly lived in. Their commitment to allowing players to shape their own experience through features like organic exploration and support for different playstyles is a wonderful reminder of where the gaming industry is headed.

Games like Ghost of Tsushima have a knack for leaving a lasting impression on players long after credits roll and we’re hopeful that the game will live up to Sucker Punch’s reputation. If all goes well, this could be the start of a new game series for PlayStation owners to fall in love with.