Journey to the Savage Planet is an upcoming first-person shooter in which players take on the role of an astronaut employed by Kindred Aerospace, the 4th best space exploration company around. The game will see players transported to a vibrant alien world brimming with exotic wildlife and secrets to uncover. Scheduled to release early next year, it will be the first release to come out of Typhoon Studios, a brand-new indie developer based out of Montreal, Canada.

Here, we’ll be covering everything you need to know about the upcoming game including its release date, gameplay, features, and some exciting rumors. Make sure to check back as we’ll be updating this story following any new announcements from the developer/publisher.

When will Journey to the Savage Planet Release?

Journey to the Savage Planet is scheduled to release on January 28, 2020, for PS4, Xbox One, and PC via the Epic Games Store. The game was first revealed during The Game Awards 2018 where a brief trailer highlighted its colorful setting and lighthearted tone. It is currently in development by Typhoon Studios and will be published by 505 Games.

Players who pre-order Journey to the Savage Planet for PS4, Xbox One, or PC will receive two exclusive in-game bonus items: The Martin Tweed digital bobble head along with a Kindred Aerospace “4th Best” pistol charm, which grants an increased chance of better loot drops while equipped.

What is the Story About

Despite having a somewhat grim and foreboding title, Journey to the Savage Planet is an extremely upbeat game packed with colorful visuals and plenty of off-kilter humor. You play as an astronaut joining the Pioneer Program at Kindred Aerospace, the 4th best rated interstellar exploration company led by CEO Martin Tweed, who appears to have been a used car salesman in a past life.

Your first assignment is to travel to AR-Y 26, an uncharted planet tucked away in a distant corner of the universe. After being dropped onto the alien planet’s surface with little equipment and no real plan, you’ll begin exploring everything AR-Y 26 has to offer in order to determine whether or not the planet can support human life. The game’s premise and presentation feel reminiscent of Hello Game’s No Man’s Sky, albeit with a much cheesier vibe and lack of pilotable spaceships. 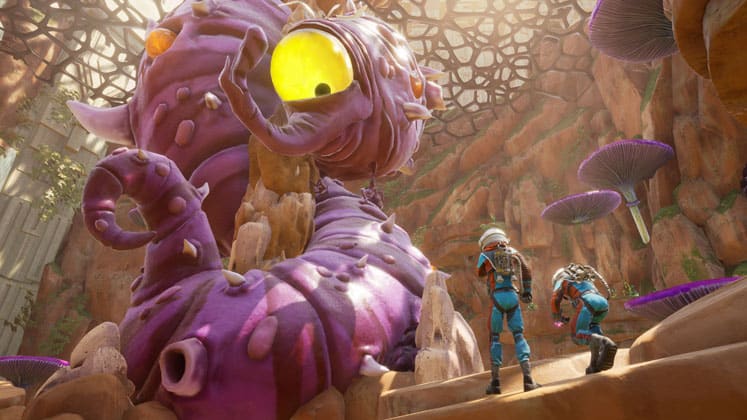 While exploring, you’ll encounter a variety of different biomes, alien wildlife, and fauna which can be cataloged and reported back to Kindred. Additionally, players will be tasked with exploring landmarks, including a mysterious tower located on the planet’s surface. If your findings prove hopeful, AR-Y 26 will become a home for future human colonies and you will always be remembered as that one really cool astronaut.

Journey to the Savage Planet is played entirely in first-person and sees you traversing an alien planet with only a few pieces of equipment. Included are a company-issued laser pistol which can easily overheat, cans of food gel for attracting small creatures, and bounce pads which can be placed on the ground and allow you to reach greater heights.

Additional tools and upgrades can be acquired by gathering materials found throughout the planet and bringing them back to your ship. Among these is a grappling hook which allows you to swing from hanging plants, a drill for obtaining mineral samples, and improved versions of your laser pistol. 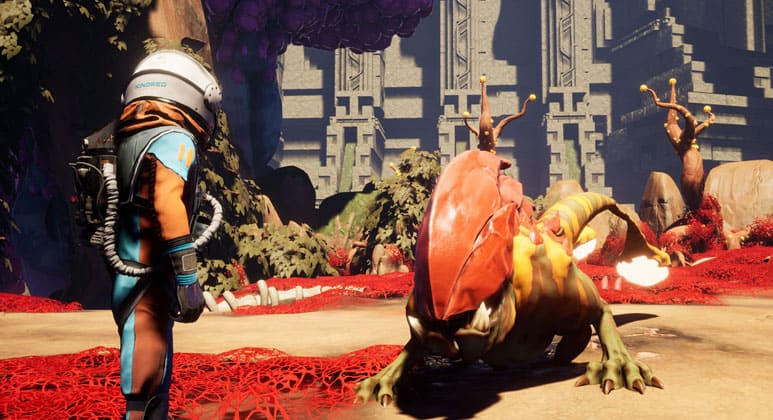 Most of the wildlife you’ll encounter pose little to no threat, with many of AR-Y 26’s inhabitants ranking relatively low on the food chain. However, there are a few exceptions that players will want to watch out for such as the Pikemander, a giant lizard with the ability to curl up into a ball and charge at the player at rapid speeds. Successfully dodging the Pikemander’s charge will cause the alien to crash, momentarily exposing a weak spot located on its tail.

Navigating through each of the planet’s biomes, which include a cave filled with lava, a snowy mountain, a murky swamp, and a lush forest, will reveal secrets about AR-Y 26 and put you face-to-face with extraordinary creatures like a giant octopus. If that all sounds bit overwhelming, Journey to the Savage Planet lets you bring along a buddy for up to two player co-op. Together, the two of you will shape the future of mankind and no doubt get into some ridiculous hi-jinx along the way.

The Final Word on Journey to the Savage Planet 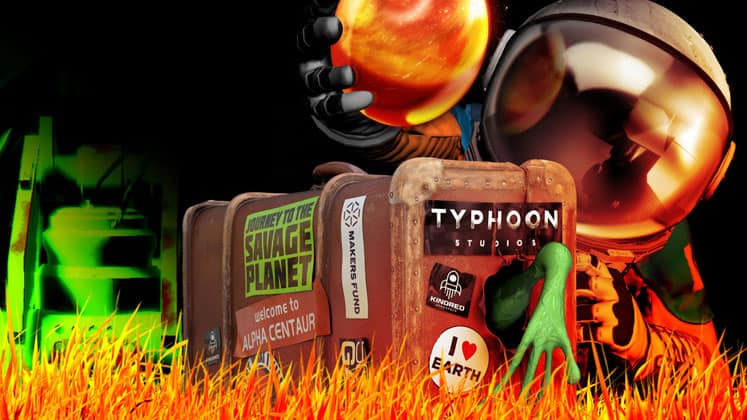 It’s not often we see a first-person shooter set in space take on such a jovial tone as Journey to the Savage Planet. The game appears to be offering a well-calculated blend of comedic dialogue, vibrant environments, and zany first-person action. The result may very well end up being an enjoyable indie shooter that you and a friend can breeze through in an evening or over the course of a few weekends.

Typhoon Studios is starting off strong and we’re eager to see what else the Canadian developer has in store for the future. For now, all we can do is wait and see as Journey to the Savage Planet’s January 2020 release date draws near. Make sure to check back for any updates from the developer/publisher.

In the meantime, we recommend checking out our list where we highlight the Best Upcoming Indie Games of 2019.