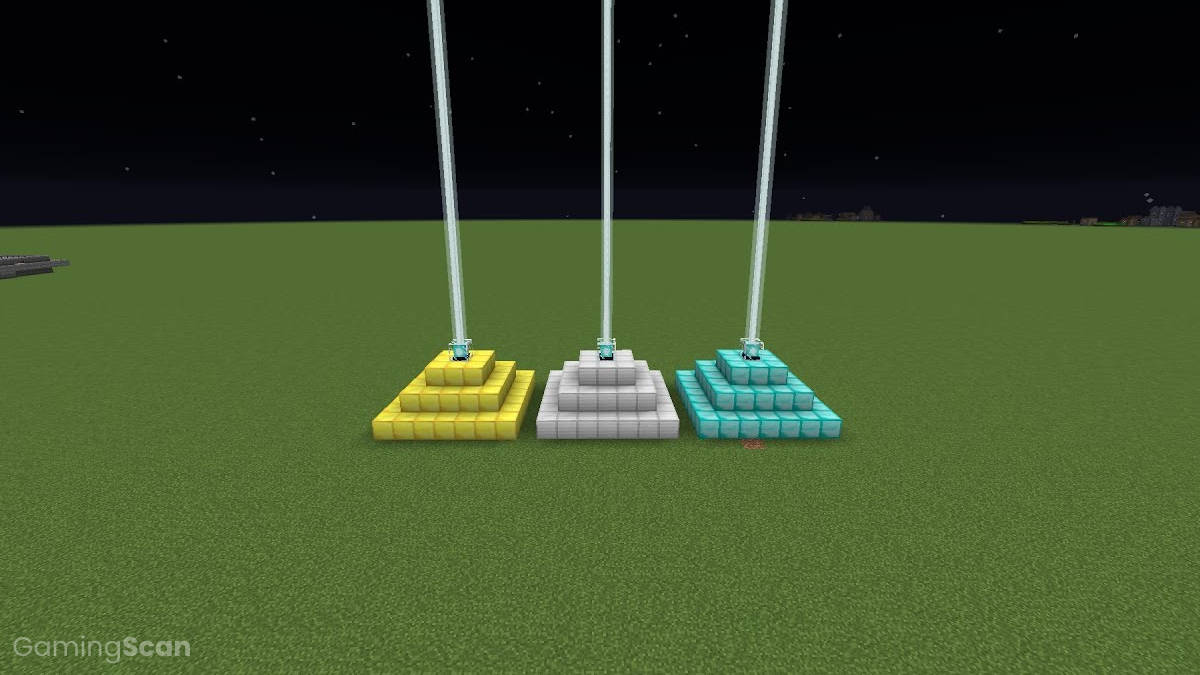 Beacons are one of the most difficult items to craft and obtain in the late game of Minecraft as it requires braveness, sacrifice, and patience just to get an important piece for its crafting recipe.

Nevertheless, beacons can provide players with amazing buffing status effects as well as added bragging rights due to their iconic decorative capabilities that can be seen even from a far distance across the land from different biomes.

This comprehensive article will tackle everything you need to know about beacons, from their crafting materials, their crafting recipe, and their uses in Minecraft.

Without further ado, let’s get started!

Related:What Is The Minecraft Beacon Range?

How To Make Beacons In Minecraft

Of course, the first thing you need to do, like for most items in the game, is to know how to make the beacon itself. One of the first steps is to gather the materials for crafting a beacon.

Fortunately, two of the needed materials are very easy to find and you may already have some lying around somewhere inside one of the chests in your base. On the other hand, the 3rd,and the most important part of the beacon, will be a lot more difficult to find.

The first crafting material is glass. It is the easiest one to find out of the three.

Sand blocks are used to create glass. Sand blocks can be easily mined with a shovel from any sea or ocean beach or any desert biomes. Just like in the real world, smelting sand or silica in a furnace at around 1,700 degrees Celsius transforms it to create glass.

At least five blocks of sand should be mined and smelted in a furnace. Any fuel source can be used to smelt the blocks of sand as long as it is enough. Although, using coal or charcoal is more efficient.

The next crafting material needed is obsidian blocks. At least 3 blocks of obsidian should be mined or acquired to craft a beacon.

Unlike other stuff like ingots and rare minerals such as diamonds and emeralds, villagers cannot trade obsidian blocks with emeralds.

Instead, another source of obsidian blocks aside from mining them is through bartering with piglins in the Nether dimension using gold ingots. However, this method is not reliable enough since the piglins drop random items when bartering with them.

The easiest and most cost-effective way to find and obtain obsidian blocks is to mine them out of the ground.

It is important to remember that a diamond pickaxe and a netherite pickaxe are the only tools that can mine obsidian blocks. Otherwise, using other tools, such as an iron pickaxe, will not be able to mine it and the block will just break and will disappear even after mining for a long time.

Quick Tip: In the Java Edition of Minecraft, pressing F3 will bring up the debug screen interface. The Y-coordinate can be found on the upper left-hand side when checking your XYZ coordinates.

If you are still having trouble locating your Y-coordinate level, here is a full guide to showing and knowing your coordinates in Minecraft.

When you get to Y-coordinate level 11, you can dig horizontally until you find lava pools. You can also follow the crackles or the noises that lava blocks make and dig in that direction.

Once you get near a lava pool, then you can now pour a bucket of water on the block beside it so that the water will flow and the whole top layer of the lava pool will turn into obsidian blocks.

Always remember that falling into lava is a quick death sentence in Minecraft. So, be careful. You can mine near the water source so that if ever you fall into a lava block, you can easily extinguish the flames engulfing your character.

Ultimate, the last and most important piece of the beacon puzzle is the Nether Star. It is a mob drop item that is very rare because it can only be obtained by summoning and defeating the quick, powerful, and most difficult boss in the game: The Wither.

Contrary to other mobs in the game, the Wither cannot just randomly spawn somewhere in the Overworld or in the Nether dimension and just surprise your while exploring.

The Wither should be actually be created and spawned by players themselves using items found in the Nether dimension that are also rare and very difficult to obtain, especially since that dimension is full of death threats such as flowing lava, pitfalls, fireballs, and Ghast bombs.

Listed below is a quick summary of the steps in obtaining a nether star:

If you want more beacons in your base, be duly prepared to start the process of summoning and killing Withers again and again. Every Wither summoned will drop a single Nether Star each time.

Some veteran Minecraft players have devised a method to easily kill Withers and obtain a lot of Nether Stars. Watch the video below if you are interested:

The next part is to craft the beacon after you have gathered all the materials needed. Crafting a beacon is easy, simply go to your nearest crafting table, and input:

The image below shows the whole crafting recipe for a beacon:

The beacon can be mined using any tool and it will not break in contrast to mining glass blocks. Aside from the beam of light shot into the sky that can be seen from afar, a beacon by itself is useless.

The true power of the beacon in Minecraft is only unleashed when it is placed on a proper pedestal and activated. The next portion will go through how to use the beacon just like a professional.

How To Use Beacons In Minecraft

Beacons in Minecraft can only be activated to provide their powerful status effects when placed on a pyramid. The pyramid should be made from any of the following ore blocks. This includes iron, gold, emerald, diamond, or netherite blocks.

These blocks can be used as a whole or in parts when building your pyramid. The only downside is that you need a lot of these blocks. That is why most players use iron blocks since it is the easiest to locate compared to the other ores.

Another Quick Tip: Respective ingots placed in the 3 ⨯ 3 grid of a crafting table will create iron, gold, and netherite blocks. Smelting the ores in the furnace is required to create the ingots.

Similarly, emerald and diamond gems are used to create blocks. Making emerald or diamond blocks require a full 3×3 grid of these gems as well.

Check out the crafting recipes below:

Beacon pyramids can have a maximum of four levels. With each of these levels, it gives the beacon more powers and a wider range. The list below summarizes the total number of blocks needed to build beacon pyramids with certain levels:

As soon as you have crafted and placed the required number of blocks, the beacon should be placed on top of the center block of the 3 ⨯ 3 pattern layer. We recommend that you choose the location of your beacon pyramids wisely since deconstructing and placing the blocks again will be time-consuming.

Once the pyramid has been constructed and the beacon placed, the next step is to right-click on it to open its menu and activate the beacon.

In this menu, you will need to feed the beacon with ingots (iron, gold, or netherite), or gems (diamonds or emeralds) to activate the beacon and receive the status effects.

As stated earlier, the number of levels in the pyramid that you constructed determines the status effects that you can receive as well as their range.

Here are all the available status effects that can be unlocked and activated:

Speed I and II / Haste I and II

Both the Speed I and the Haste I status effects are unlocked and can be activated at 1-level pyramids.

Resistance I and II / Jump Boost I and II

Both the Resistance I and the Jump Boost I status effects are unlocked and can be activated on at least 2-level pyramids.

The Resistance power decreases almost all incoming damage that is received from enemy mobs or players. Whereas the Jump Boost power increases the jump distance and height of players within the range of the beacon.

Strength I and II

The Strength I status effect can only be unlocked and activated starting on 3-level pyramids. The power increases the melee damage that can be inflicted on any mobs or players.

The secondary powers can be unlocked with beacon pyramids that have at least 4 levels. This includes Regeneration I which allows players to regenerate health in a quick span of time.

Aside from that, the chosen primary power status effect will be upgraded to level II which further increases the power obtained.

Keep in mind that the status effect will only be applied to your character as long as you are within range of the beacon. This related article tackles the maximum range the Minecraft beacon can reach.

The buffs will only last for about 15 to 17 seconds before disappearing once you leave the beacon’s area of effect.

You can always go back to the beacon and change the primary power that you have selected as long as you feed the beacon another ingot or gem.

If you want to have all status effects at the same time, you will need to construct 6 different beacon pyramids or a modified beacon pyramid that can handle 6 beacon blocks at once.

The modified beacon pyramid should have a base of 10 ⨯ 11 blocks, a second layer of 8 ⨯ 9 blocks, a third layer of 6 ⨯ 7, and finally, a top layer of 4 ⨯ 5 blocks to get the maximum of 4 levels. The total blocks needed to construct this are 244 blocks.

The format of the modified beacon pyramid can be seen as follows:

Changing The Color Of The Beacon’s Beam of Light

Having a beacon in your base is a signature that you have defeated one of the most difficult mobs to fight in Minecraft.

As cool as it is, you can further customize it by changing the color of its beam of light. You can just place a stained-glass block on top of the beacon, and it will tint the light with whatever color you choose.

Luckily, stained-glass blocks can be easily made using 8 blocks of glass and 1 piece of dye chosen from the available 16 colors in the game.

The dye should be placed in the middle slot of the crafting table, and it will be surrounded by the 8 glass blocks. It will result in 8 stained-glass blocks of the chosen color.

Check below to see the crafting recipe for any stained glass:

We have reached the end of the article! Hopefully, you have learned a lot in this comprehensive guide about beacons, from crafting them and using them in the game.

It is now up to you to decide where to put your beacon pyramids and what color your beacon’s beam of light should be in your own Minecraft Survival or Creative worlds!

Your placed beacon blocks are also explosive-proof which means any creeper or TNT that blows up will not destroy the block since it is an ultra-rare item. It will only turn into its item form.

Keep in mind, however, that when beacons are in their item form, they will be vulnerable to destruction, or they can disappear via despawning after quite some time.

Good luck and have fun! 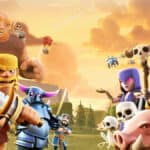