Minecraft Dungeons is a spin-off of the popular crafting/survival game that maintains the sandbox’s blocky visuals while introducing gameplay reminiscent of Diablo-style dungeon crawling. During Microsoft’s X019 Xbox event a new trailer was shown which provided more info on when players can expect to start slaying mobs of enemies and exploring procedurally-generated biomes.

Here, we’ll be covering everything you need to know about Minecraft Dungeons, including its release date and the latest news regarding story and gameplay. Make sure to check back as we’ll be updating this story following any new announcements from Mojang or Microsoft.

When Will Minecraft Dungeons Release?

Although we still don’t have an exact date, Minecraft Dungeons is scheduled to release sometime during April 2020. At launch, the game will be available for PC, Nintendo Switch, PlayStation 4, Xbox One and included with an Xbox Game Pass subscription. It will have cross-play support between Xbox and PC with no official word regarding Switch or PS4.

Minecraft Dungeons is currently available for preorder and comes in two versions; the base game (20 USD) as well as a Hero edition that includes two future DLCs (30 USD). Mojang has stated they plan on supporting the game post-launch with additional free/paid content.

In an interview with IGN, Mojang Executive Producer David Nisshagen confirmed that Minecraft Dungeons will focus heavily on gameplay while still providing some light story beats and world-building. “You have a chain of objectives you want to accomplish, it’s not like we have a massive narrative that you go through,” Mojang’s David Nisshagen told IGN. That being said, the game takes place in the same universe as Minecraft and includes numerous references to the sandbox game. 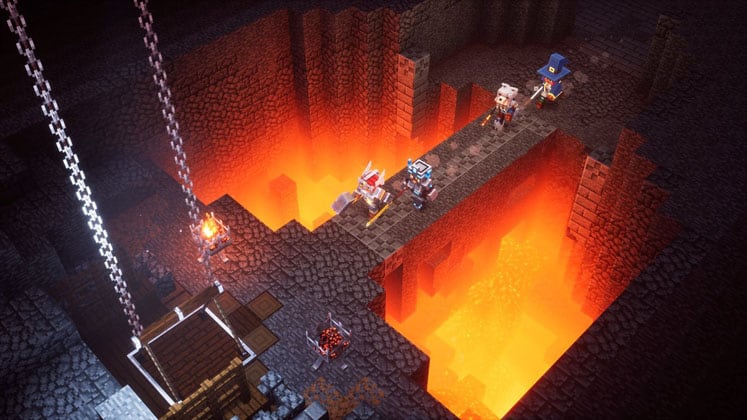 Serving as the game’s main antagonist is the Arch-Illager, a social outcast who’s constantly bullied by the other villagers until he discovers an ancient artifact that grants him endless power. The Arch-Illager uses his newfound strength for evil by making every villager his slave and unleashing an army of monsters across the land. The player is tasked with defeating the Arch-Illager and his minions by combining different weapons and abilities while also teaming up with other players.

Despite looking almost identical to Minecraft, Minecraft Dungeons is a completely different kind of experience. Utilizing Unreal Engine 4, the game introduces new mechanics, items, an isometric camera, and dungeon-crawling gameplay reminiscent of titles like Diablo 3 and Path of Exile. However, the spin-off maintains the multiplayer appeal of Minecraft, supporting up to four-player drop-in/drop-out co-op along with difficulty scaling based on party size.

The game is centered on exploring procedurally-generated, branching environments filled with mobs of enemies, simple puzzles, and gear for your character. Biomes are fairly diverse and include both underground and surface level environments ranging from sand-filled pyramids, lush forests, caves with lava, and more. Fans of vanilla Minecraft should feel right at home as they encounter familiar enemies like skeletons and zombies.

However, there are some new mechanics and systems that may catch players off guard. One example includes the ability to summon companions such as a llama or dog to aid you in battle. There are plenty more which we’ll now go over. 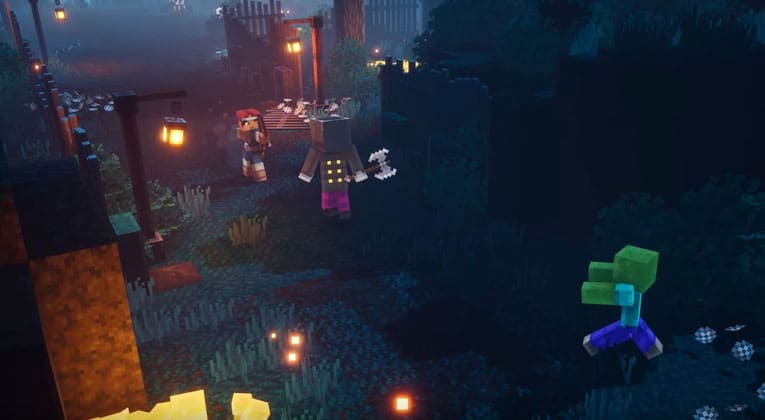 Minecraft Dungeons sees players using a combination of melee and ranged attacks against large groups of enemies. The game includes various swords, hammers, axes, bows, and crossbows along with special Artifacts that grant your character special abilities in exchange for some resources. Mojang’s goal is to keep players moving and progressing at a steady pace; therefore, Minecraft Dungeons will not feature a building or mining component.

The process of defeating enemies has been a lot more streamlined thanks to a switch from first-person to an isometric third-person perspective, allowing the player to see their character’s surroundings at all times. If you’ve played Diablo or more recently Marvel Ultimate Alliance 3, then you probably have a good idea of what to expect. 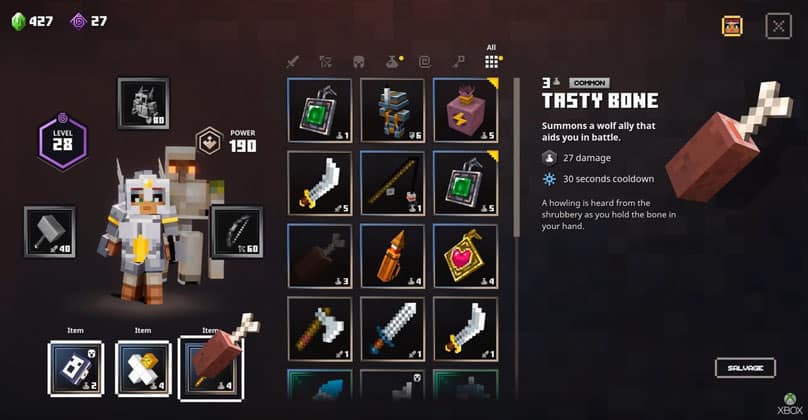 The game will reportedly include 20 different weapons for each type, meaning there will be 20 melee weapons, 20 ranged, and 20 artifacts for players to combine. A character’s build is determined by which gear the player has equipped, including armor, weapons, and enchantments. Players will be able to adjust their character’s gear on the fly and swap between different pieces of gear based on the situation.

Although each component plays a role in determining your character’s playstyle, armor appears to be the biggest deciding factor, impacting things like health, movement speed, and certain skills. For example, equipping Light Armor will increase a character’s ranged weapon proficiency where as Heavy Armor will allow them to take more of a beating.

Most interesting are enchantments, which add a randomized bonus to dropped gear. However, to activate these bonuses and increase their effect, players will have to spend XP they’ve acquired. This adds a level of replayability and loot progression that’s commonly found in most dungeon crawlers.

Mojang has confirmed all gear will be obtainable in-game, free from any loot boxes or microtransactions. Players will receive loot from chests, fallen enemies, and by purchasing gear in shops using in-game currency. 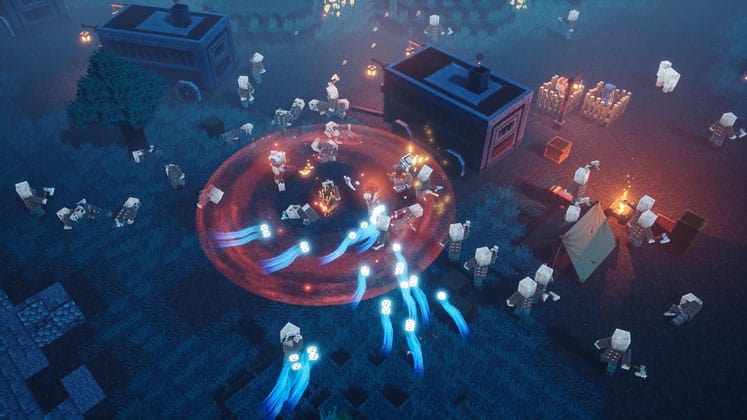 Existing Minecraft players will be able to easily pick out many of Minecraft Dungeons enemy types, with creepers, zombies, spiders, skeletons, and endermen all making an appearance. Accompanying them are necromancers, which can resurrect defeated mobs, and wraiths, enemies with the power to set areas on fire.  Lastly, new piggybank mobs reward players with loot upon being smashed.

The game will also reportedly feature mini-bosses at the end of certain levels, providing players with an opportunity to earn more valuable loot. These battles are sure to provide a unique challenge beyond just fighting mobs and test players skills.

The Final Word on Minecraft Dungeons 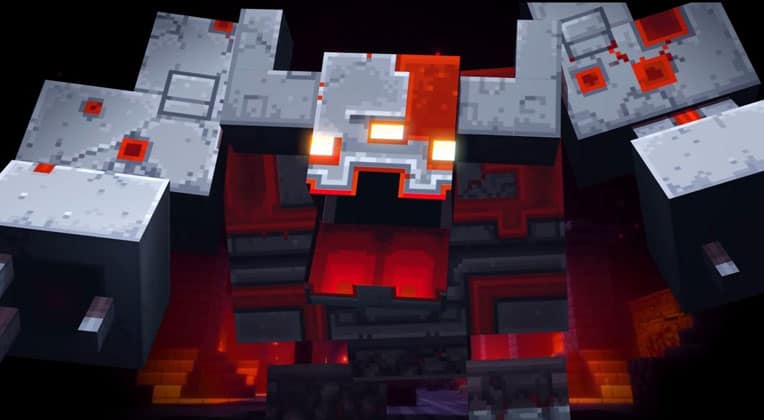 Creating a follow-up/spin-off to a game as popular as Minecraft is no easy task; rest assured Mojang has spent a great deal of time refining their development process in order to give fans a new kind of experience with a familiar presentation. The studio’s decision to build the game on Unreal Engine 4 has resulted in more atmospheric environments which provide the perfect backdrop for showcasing the game’s lighting effects and physics system.

The addition of new mob-types such as wraiths and necromancers will give players an opportunity to devise new strategies and when combined with procedurally-generated levels, will go a long way towards making Minecraft Dungeons feel like a completely different game. Hopefully, Mojang is able to satisfy existing fans while drawing in a new audience of players.

In the meantime, we recommend checking out our list highlighting the Best Upcoming Xbox One Games of 2019 (and beyond).