The original Mount and Blade is a gaming oddity; visually dull, clunky and unwieldy, yet intensely fun and expansive. It was the fruit of dizzying ambitions of knightly sandbox RPG antics and open-world freedom limited only by the technical capabilities available at the time.

Against all the odds, Developer TaleWorlds Entertainment delivered, and the game garnered a devoted fan base, even spawning a small, yet vibrant eSports scene that perseveres to this day.

The announcement of sequel Mount and Blade 2: Bannerlord was a joyous occasion for many who partook in the original, but as the years passed, fans have become increasingly antsy over when and in what shape the game may release.

As TaleWorld remains steadfast in the face of increasingly vocal demands for information about the game, here’s a recap of everything we know so far about Mount and Blade 2: Bannerlord. 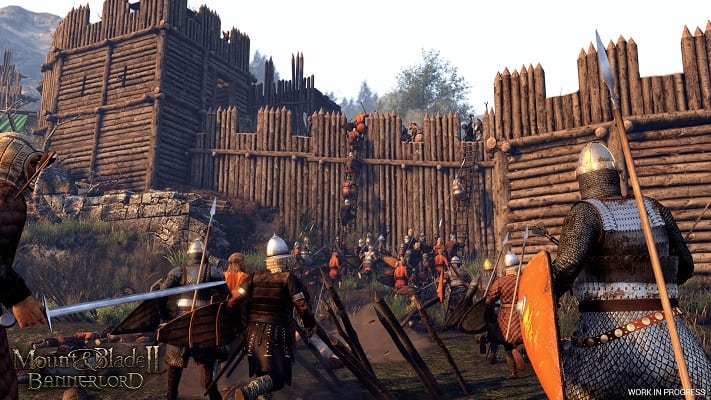 TaleWorlds is staunchly against advertising a date, let alone any hints as to when Mount and Blade 2: Bannerlord might release before the game is in a fully formed state and able to offer players a complete experience.

TaleWorlds is redefining the terms perfectionism and by doing so are inadvertently heightening demand for the game. Many a developer would be exalted with a similar situation, but this may yet prove a hindrance to how the game is received when it does ultimately release.

The proposed release window is among the most well-kept secrets in the industry with official social media accounts and websites resoundingly absent of any inkling of when to expect the game.

TaleWorlds initially touted Mount and Blade 2: Bannerlord for release in 2016, but the year came and passed with no sign of the game. Similarly, in a dev stream during E3 2016, TaleWorlds toyed with the idea of a 2017 release, but it never came to pass.

With this in mind, speculation becomes a moot point especially if we consider the length of time Mount and Blade 2: Bannerlord has been in development. TaleWorlds announced the game in 2012 with suggestions conceptual development began as far back as 2010.

The time frame is approaching a decade, and we hope Mount and Blade 2: Bannerlord lives up to the hype or otherwise risks the wrath of crazed hordes of eager fans bolstered by waning patience levels. 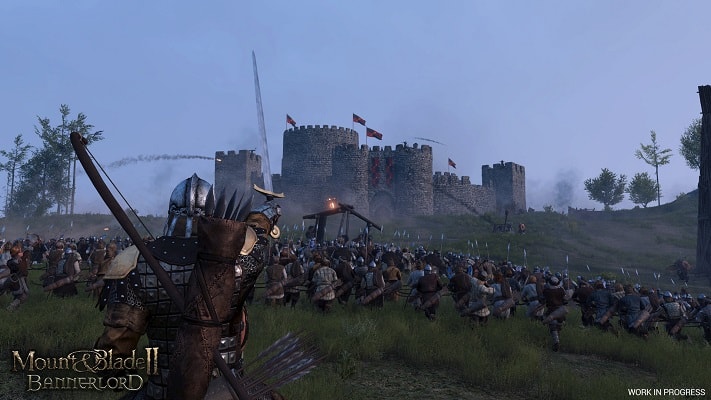 The Mount and Blade 2: Bannerlord beta has been subject to the same wavering and seemingly choreographed merry go round of rumors, semi-official confirmations, and disappointment.

In the very same E3-timed stream dangling a 2017 release, TaleWorlds stated a beta would go live by the end of 2016. Nothing resembling a beta surfaced as the tail end of 2016 approached with the developer sweeping any mention of it under the carpet citing unforeseen issues.

Playable demos were on offer at E3 2017, but the average joe has yet to get their hands on even a minute of a playable beta. TaleWorlds mentioned the possibility of an Early Access launch on multiple occasions, and a Steam page seemed to corroborate this intention, but it’s yet to happen.

At Gamescom 2018, interviews and gameplay dominated coverage of Mount and Blade 2: Bannerlord, but during a MAX Monsters and Explosions live stream, a trio of TaleWorlds devs unequivocally confirmed an ”early access beta” was on the way. However, we remain in the dark as to when this might happen.

If we consider the state of the game and a sustained trickle of Q&A development blogs, the beta can’t be too far off. We can confidently measure the wait in months rather than years, which in the grand scheme of Mount and Blade 2: Bannerlord‘s long development is a step in the right direction. 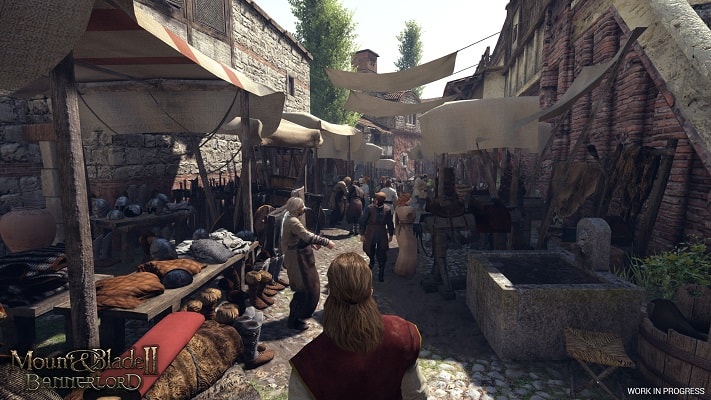 The narrative of Mount & Blade II: Bannerlord sits approximately 200 years before the events of Mount and Blade: Warband in a declining land devastated by a three-way civil war named the Calradian Empire. To make matters worse, surrounding Calradia are newly formed kingdoms eager to assert their new found dominance in the region.

Mount & Blade II: Bannerlord is a world of castles dominating war-torn landscapes, of knights and glory found only on the battlefield, of lords and kings scrambling to consolidate their ebbing control, and racketeering criminals plying their trade in the seedy underbelly of towns.

As power struggles reshape sovereign territories, the player starts as a lowly medieval foot soldier burdened with the unlikely task of unifying Calradia and ridding it of years of turmoil.

Factions, clans, and mercenaries populate the intricate political landscape of Mount & Blade II: Bannerlord. Instead of a dominating, uniform culture and cosmetic veneer, layering each faction is a rich tapestry of political groups, lords, religious cults, and smaller groups as well as specific fauna, landscapes, trade goods, and gear. Each ripe for manipulation, conquest, exploration, and befriending.

Among these are the Aserai, a desert-dwelling people adept in horse-led combat, the Mongol-like Khuzait Khanate, the Norse-inspired axe-wielding Sturgians, and the Battanians who have a penchant for ambushing unwitting armies from the concealed heights of trees. 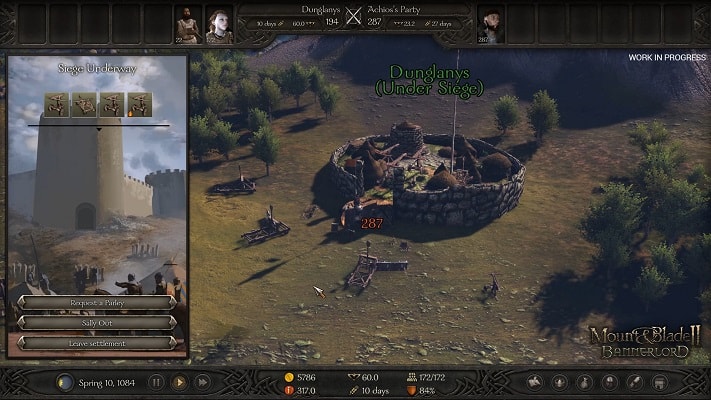 Dynamism is key to understanding Mount and Blade 2: Bannerlord gameplay. Players are set loose in an immersive, fluid, and living open-world medieval sandbox then left to their own devices, be they to conquer neighboring lands, lead a simpler life as an erring bandit or gather riches as a mercantile-minded opportunist.

Mount and Blade 2: Bannerlord divides gameplay between the omniscient world map view and third-person real-time play. The world overview map is the stage from which players will unleash their political machinations through land grabs, diplomacy, troop movement, settlement management, and alliances; a bird’s-eye view of their strategy to dominate Calradia. The third-person in-world view focuses on combat and exploration as well as interaction with the locales.

Players lead their very own factions across the sandbox world, the ranks of which grow via diplomacy, training soldiers, supplying equipment, and a barter system centered on dealing, strategic marriage, cease-fires, pacts, and the like. But maintaining the favor of followers fluctuates to the rhythm of the ebbing and flowing of influence and faction moral.

Villages and towns boast their own contextual narrative that players can choose to engage with or bypass completely. Take over a ruthless crime syndicate to pocket some extra coin or interact with the punters at the local tavern over medieval drink-hole board games. 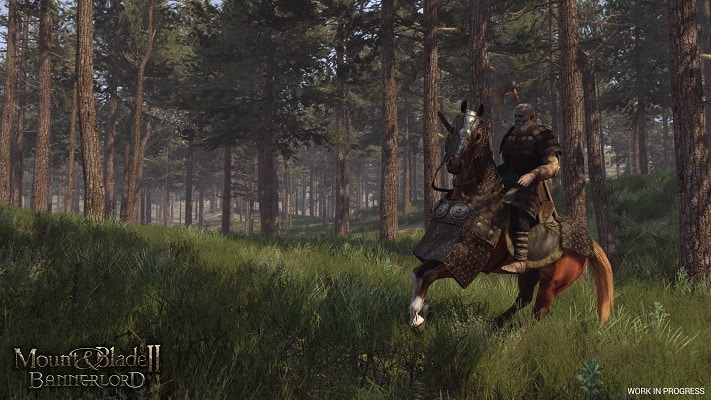 Alongside melee and mounted combat, siege returns with an emphasis on large-scale battles, notably through castles as either the target of an attack or a stronghold to defend. From rams to siege towers, Mount and Blade 2: Bannerlord is vying for an authentic experience of medieval battle in all the gore and destruction this entails.

Mount and Blade 2: Bannerlord will boast a genuine feudal economy which wavers based on the age-old dictum of supply and demand. Players can parade their merchant talents through investments, owning shops and farms, and maximize profits by selling an in-demand resource or disrupting a caravan route.

We have here a deep world full of activities and intrigue whose surface we’ve only just scratched above. The game also has a physics-based weapons system, crafting, armor, perks and an intricate skill tree, multiplayer, modding, situationally responsive AI, battle tactics, and quests.

There’s no shortage of Mount and Blade 2: Bannerlord trailers and gameplay videos. We’ve compiled the most important starting with siege gameplay from Gamescom 2016.

Followed by the Gamescom 2017 trailer depicting a fierce battle between Calradia and Battania as well as a trailer showcasing the multiplayer Captain Mode.

And, finally, a more traditional trailer aired at Gamescom 2018.

If it’s ever felt like we are on the cusp of Mount and Blade 2: Bannerlord releasing then the time is now. Although we can’t pinpoint when the game is set to drop, we are edging ever closer, and conventional wisdom is that it is just around the corner.

Should TaleWorlds linger, the developer runs the risk of wasting the favor fostered by the success of the original game and sentencing itself to the gaming worlds equivalent of the guillotine.