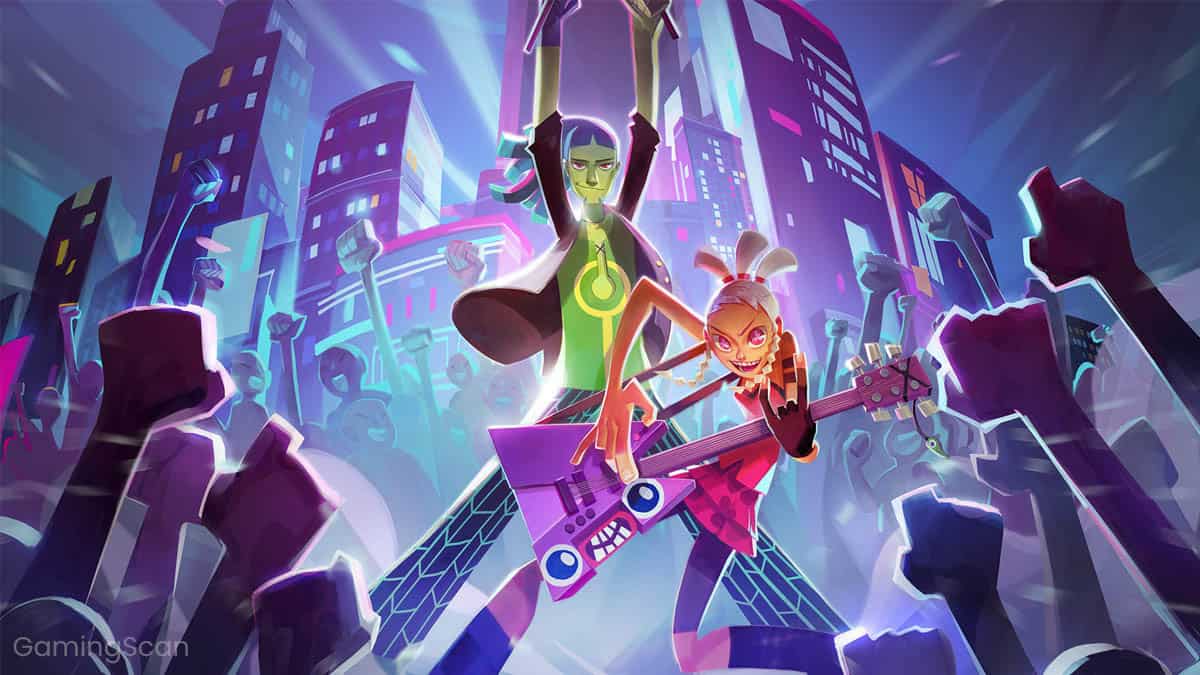 No Straight Roads is a music-based action-adventure game created by Malaysian indie developer Metronomik and published by Sold Out. Serving as Metronomik’s debut title, the game presents a unique blend of rhythm-based combat and 3D platforming.

In this review, I’ll be sharing my thoughts on the game in order to help you decide whether or not you should pick it up. No Straight Roads is currently available for PS4, Xbox One, Nintendo Switch, and PC via the Epic Games Store. For this review, I’ll be referencing the PC version of NSR, which was provided by the game’s publisher.

What Is The Story About?

No Straight Roads is about an indie rock band called Bunk Bed Junction, comprised of guitarist Mayday and drummer Zuke. The setting for the game is Vinyl City, a futuristic metropolis where music converted into energy, a process known as “Qwasa,” is used to power just about everything.

Vinyl City is controlled by the titular No Straight Roads, a corrupt music label whose primary goal is to keep the city under its thumb while monopolizing the industry using electronic dance music (EDM). The city is split into several districts, each one ruled by one of NSR’s artists.

These artists also serve as judges for “Lights Up,” a music competition where new acts can audition in hopes of joining NSR. Bunk Bed Junction sets out to challenge NSR’s musical tastes by performing at Lights Up with the goal of bringing rock n’ roll back to Vinyl City.

After being wrongfully eliminated from the competition, the duo decides to take it upon themselves to fight back against the NSR and expose their shady practices. With assistance from friends and fans, Bunk Bed Junction is able to defeat every NSR artist before finally confronting Tatiana, the head of the label.

While there were issues with the story’s pacing and some cheesy dialogue, for the most part, I found the story quite satisfying. Throughout the game, you get to see the characters evolve and interact in ways you wouldn’t expect. There are also a handful of twists throughout the story that managed to surprise me and keep me invested.

Gameplay in No Straight Roads consists of real-time 3D combat and platforming sections. Players directly control either Mayday or Zuke and can swap between both characters at any given time. While the two share many of the same abilities, there are some notable differences to help distinguish them from each other.

For example, Mayday attacks using her guitar, dealing significant damage at the cost of slow attack speed. Meanwhile, Zuke can quickly chain together combos using his drumsticks but has a lower damage output. In addition, both characters can perform powerful special attacks that consume a portion of their energy meters.

The game features both close and long-range combat, with the player able to pick up and fire music notes at flying enemies. During battle, enemies time their attacks in tune with the background music, encouraging you to pay attention to the beat and gauge when to jump, dodge, or attack.

While there are fodder enemies scattered throughout levels, No Straight Roads is primarily a boss rush-style game, with each level dedicated to a specific NSR artist. There’s a surprising amount of variety when it comes to bosses, and each one introduces at least one new mechanic or strategy for the player to grapple with.

Some battles are modeled after traditional boss fights with multiple phases while others play out like a series of rhythm-based minigames. I can say the game does a great job of consistently throwing new challenges your way, even if it doesn’t always stick the landing.

The biggest issue I faced with both combat and platforming is the heavy reliance on rhythm-based movement. The margin for error is ridiculously small, and it’s very easy to get stun-locked by enemies or miss your jump when going between moving platforms. Additionally, the controls and camera don’t feel like they were designed for a rhythm-based game.

For one, you can’t cancel out of attacks or dodges, meaning you have to see every action carry out. Also, most levels feature less-than-ideal fixed camera angles that make it hard to see where you’re jumping or when enemies are about to attack. While there are a couple of standout minigames and boss encounters, overall, I found the gameplay to be lackluster and, at some points, downright frustrating.

Many of NSR’s issues are made much worse due to an overall lack of polish when it comes to how the game runs. Simply put, the game does not feel done and would greatly benefit from a couple of more weeks, if not months, of bug fixing and playtesting.

During my playthrough, I experienced four separation situations where a boss would either fail to spawn in or wouldn’t transition to their next phase. Also, Zuke and Mayday will sometimes get stuck or clip through level geometry, an obstacle made much worse by having fixed camera angles.

Cutscenes are particularly wonky, with some characters appearing noticeably stiff. Additionally, there’s an issue with the hair on Zuke and Mayday’s models that causes them to violently tremble during cutscenes.

Lastly, I encountered a bug towards the end of the game that causes the dialogue to desync from the animated cutscene if you happen to pause the game while any character is speaking. Although I was ultimately able to get past each bug and finish the story, it had a negative impact on my enjoyment.

It’s a shame these performance issues made their way into the final version of the game since they overshadow NSR’s terrific visuals and sound design. While the game may not be the best in terms of graphical fidelity, it consistently nails the cartoony look it’s going for.

Each district in Vinyl City has its own personality, and you can tell a great deal of time and care went into designing them. Additionally, the game’s use of bright colors, high contrast, and low-poly environments give it a certain charm that feels reminiscent of games like Jet Set Radio, Space Channel 5, and Psychonauts.

However, sound design is where NSR truly shines, which seems only fitting for a rhythm-based game. Each battle is wonderfully accented by a wide selection of EDM-inspired tracks that reflect the boss’s theme and personality. As battles progress, a meter at the top starts to move from ‘EDM’ to ‘Rock,’ causing the two tracks to overlap until eventually switching over to Rock completely, indicating victory is close.

While it may be hard to look past NSR’s shortcomings, it’s important to have some context. Most rhythm games adhere to a tried-and-true formula that leaves little room for error. With NSR, you can tell Metronomik set out to make something completely new, a cross between rhythm and real-time combat/platforming.

Additionally, since this is the studio’s first released project, there’s bound to be a few bumps along the road. Hopefully, the developer has plans to address some of the more pressing bugs via a patch in the near future. Until then, I recommend checking out NSR’s soundtrack separately from the game, since that’s arguably its greatest strength.

No Straight Roads offers a unique take on rhythm-based combat and 3D platforming that’s further complemented by an engaging story with interesting characters. Unfortunately, the game suffers from poor performance and an overall lack of polish.