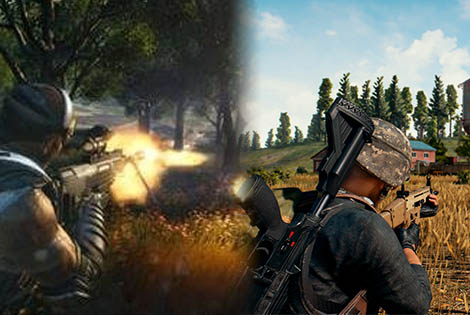 After the astronomical success of games like PUBG (PlayerUnknown’s Battlegrounds) and Fortnite, it was only a matter of time until the first AAA Battle Royale release.

Activision’s Black Ops 4 is the first Call of Duty game not to feature a single-player campaign – but it’s also the highest-rated installment in the franchise since Modern Warfare 2. Black Ops 4 ditched single-player mode to make way for Blackout, a sprawling map that can hold up to 100 players.

But is this big-budget offering slick enough to steal away PUBG diehards?

In this article, we’ll take a look at how Blackout holds up against Battle Royale’s classic PUBG.

Since its peak in January, PUBG’s player base has been steadily dwindling. Part of this is because PUBG is still not available for PS4. Streamers are also migrating to newer games as time goes on. Blackout is now available on PC, XBOX One, and PS4, but will the $60 price tag put off potential players?

In the following sections, we’ll take a look at the similarities and differences between PUBG and Blackout. Let’s start with graphics.

It’s obvious from the get-go that Blackout is a triple-A title. Textures like rocks and dirt are clearly higher-fidelity and appear sharper than they do in PUBG. Blackout is also slightly more stylized – it’s not like Fortnite, but the stylized grass and trees give the environment a more polished feel. However, considering the budget difference between PUBG and Blackout, this shouldn’t be a surprise.

PUBG has a grittier environment, with duller lighting and a more realistic style. It’s not as well optimized as Blackout and can seem to judder by comparison. This makes enemy players much harder to spot, and it can take some time to get the game going.

In PUBG, you’ll spawn in a cargo plane along with the other 99 players.

You can skydive once the plane is over land, but you’ll want to time your jump carefully if you’re aiming for a specific spot on the map. In Blackout, you’ll spawn in one of several attack helicopters, though the max number of players will depend on which mode you’re in. Singles and quads mode have a maximum of 88 players, while duos can support a 100 player match.

Blackout also equips players with a wingsuit, which allows you to drop as soon as the game starts and land pretty much anywhere you like.

PUBG boasts multiple map offerings: Erangel, an abandoned Russian military island; Miramar, a South American themed desert; Sanhok, a tropical jungle; and Vikendi, an island on the Adriatic Sea. The first two maps sprawl a massive 8km by 8km, Sanhok is slightly smaller at 4x4km, and Vikendi is at 6x6km. At launch, Blackout’s only map is much smaller but has a pretty wide variety of terrain.

There’s a flooded city, a fracking tower, a dryland area… though it’s only one map, there’s a lot to explore.

Blackout’s arena has another surprise. While the focus is still certainly on the other players, the Asylum area spawns a horde of AI-controlled zombies. It’s a risky move to take them on amid a Battle Royale, but taking them out can lead to some highly-coveted gear.

The general objective of both games is to remain the last man (or squad) standing on an island with around 100 other players. Both games feature a shrinking circle that closes in on the players as time goes on, forcing them into close quarters with their teammates and enemies alike.

Games typically last about 25 – 30 minutes in both Blackout and PUBG, but Blackout’s map is a tad smaller.

This, combined with the slicker animation and brighter lighting, makes it a lot easier to find and engage enemies in Blackout. PUBG’s jumpier animations and third-person perspective lend themselves to a slower style of gameplay, with more campers hiding out in houses waiting for an opportunity to ambush you.

Like most COD games, shooting in Blackout is a reasonably straightforward affair.

While you can control vehicles from a third-person perspective, shooting is exclusively first-person. Perk crates are scattered around the map, which provides temporary boosts like silent footsteps, or seeing enemy vehicles through walls. PUBG’s optional-third person perspective provides a wider field of vision, as well as more realistic recoil and feedback.

The skill cap in PUBG is definitely higher, so those experienced with PUBG may find shooting in Blackout a bit of a downgrade.

Looting takes a backseat to combat in Blackout, which makes it more appealing to casual players who don’t want to get bogged down in the intricacies of PUBG’s inventory.

Rare loot can be found in mystery crates throughout the map, which are highlighted in red or blue light. Drawing attention to these crates means it’s easier to find rare items, but also encourages more combat encounters as players vie from the same crate.

PUBG however, is littered with resources, ranging from weaponry to armor, and even shoes. This variety makes it harder to conclude what’s useful, and you’ll often find yourself picking up resources that you’ll never actually need.

PUBG vs Blackout – Which Game Should I Play?