Twenty years after the release of the original Resident Evil 2, Capcom is back with not just a remaster, but a long overdue reimagining of what is considered a seminal entry in the history of horror gaming.

The zombie apocalypse trappings of the original are back in all their glory, as it the story, bolstered by a complete visual overhaul and a few choice quality of life improvements. The whole package brings Resident Evil 2 well and truly into the twenty-first century while remaining faithful to the spirit of the 1998 smash hit.

With release quite literally within reach, here’s everything we know so far and what we should expect from the long-in-development remake. 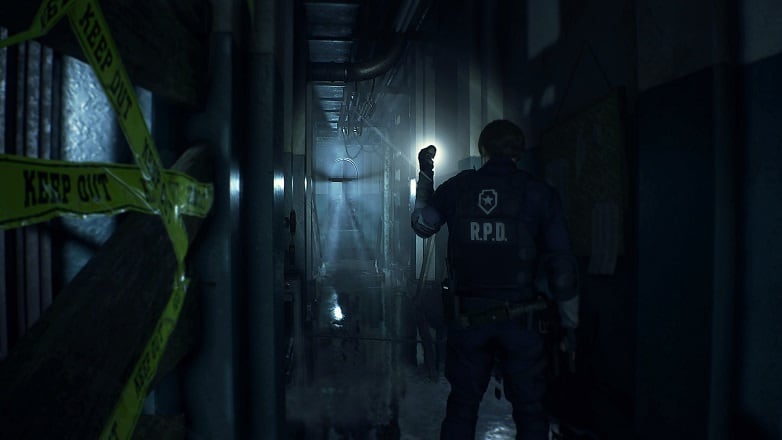 Capcom is releasing Resident Evil 2 on January 25, 2019, on PlayStation 4, Xbox One, and Windows PC.

Murmurs of a Resident Evil 2 remake have done the rounds since Capcom orchestrated a remake of Resident Evil on the GameCube way back in 2002. However, creator Shinji Mikami opted to put any ambitions of a remake on the back burner to focus his attention on the development of subsequent entries in the series, notwithstanding the unrelenting demands from director Hideki Kamiya for a remake.

The usual coterie of fans clamoring for a chance to dive back into the game fueled speculation for over a decade, until somewhat unexpectedly Capcom announced that a Resident Evil 2 remake was in the works.  A snappy, unassuming video published on the Resident Evil YouTube channel in 2015 delivered the news headed by Capcom R&D Division 1 producer Yoshiaki Hirabayashi.

Unveiling a questionably worded t-shirt stating ”We Do It” (presumably intending to say ”We’re doing it”, but alas these things often get lost in translation), Hirabayashi stated that Capcom had heard fans loud and clear, officially approving the Resident Evil 2 remake. Hirabayashi warned updates would be few and far between.

True to his word, Hirabayashi and Capcom shared very little about the project until E3 2018, when the marketing steamroller sprung to life, and the developer flabbergasted fans with not only gameplay footage, but a concrete release date in a move away from the dilly-dally of hazy release windows.

As has become an unavoidable part of any release, Resident Evil 2 is available as a Deluxe Edition, which includes an extra DLC costume pack for Leon and Claire including Arklay Sheriff, Noir, Military, and Elza Walker outfits, as well as a deluxe Samurai Edge Albert model. For those interested, Capcom has released a dedicated trailer for the Deluxe Edition.

Spend a bit more money, and you can get hold of the Collector’s edition. It features everything from the Deluxe Edition as well as a 12 inch tall Leon figure, an art book compiled by in-game journalist Ben Bertolucci, a digital soundtrack of music from the remake and original, and finally a replica poster of the renovation plans for the Raccoon City police station.

If you want to go all in and happen to live in Japan, the Japanese exclusive Premium Edition is available with a replica Bluetooth typewriter keyboard.

We’ve been positively spoiled when it comes to trailers for Resident Evil 2, starting with the announcement trailer at E3 2018. The video is a juxtaposition of short clips, mood-setting sonic stabs, and glimpses of gameplay while plugging heavily and systematically on the fear factor.

However, amid the excitement of finally laying our eyes upon the Resident Evil 2 remake, what stood out was how different the game looked to the original (and how stunning it seemed). The trailer confirmed with no shadow of a doubt that what we were witnessing was not a routine remaster, but a bonafide reimagining.

Capcom has seemingly stripped down the concept to its most basic building blocks and started again from scratch – a finessed and modernized rejuvenation.

A little over a week later, Capcom regaled interested parties with a five-minute gameplay video mimicking the demo on display at E3 2018. One of the game’s two protagonists, Leon, enters the Raccoon City Police Station and surveys disturbing CCTV footage of a policeman being mauled by a zombie before setting off to help.

Suspenseful and heart rate-inflating footage that should disturb even the most stoic among us follows Leon as he makes his way through the station. A few bloody corpses later and a stroll through a labyrinth-like set of corridors, he comes across the officer. Leon furiously tries to save him, but the officer loses his life – and lower half – to a ravenous horde of zombies.

Leon goes in guns blazing and delivers swift justice narrowly avoiding death himself. An unflattering scramble with a corrugated metal shutter later and Leon avoids a close call thanks to the help of a visibly-injured Officer Marvin.

Finally, E3 2018 produced one final extended trailer broadcast during the PlayStation Showcase. In an interesting twist, the trailer is from the perspective of a rat as it scavenges for food in the Raccoon City police station before being killed by a falling set of shelves.

Meanwhile, a confrontation takes place culminating in a zombie ingurgitating a large chunk of an officer’s neck before Leon rocks up to save the day. A short montage follows with cameos from Claire and Marvin.

The trailers caused such a stir that Resident Evil 2 won the Game Critics Awards’ ”Best of Show” category at E3 2018.

At the Tokyo Game Show, Capcom showcased a story trailer with an emphasis on the dual narratives of Leon and Claire. We also got our first glimpse of Ada Wong, Mr. X, and Sherry Birkin. 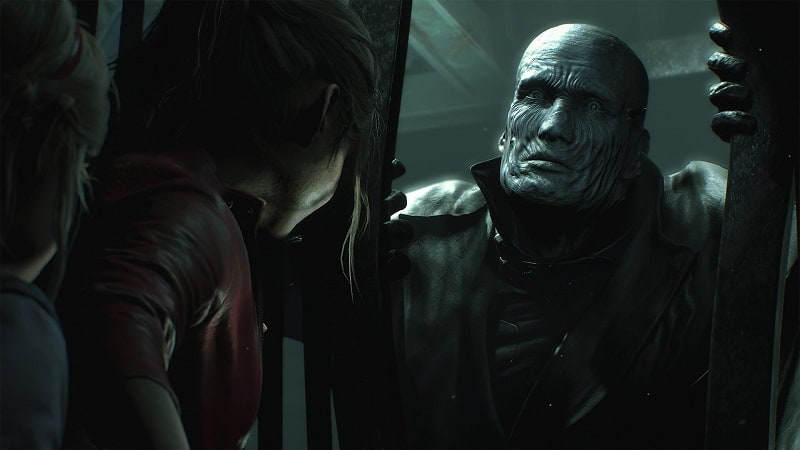 The story in the Resident Evil 2 remake adheres strictly to the narrative laid out in the original. The game transports players to Raccoon City, a dozy midwestern town, about two months after the events that transpired in Resident Evil. A botched set of experiments undertaken by shady biomedical corporation Umbrella has unleashed the extremely contagious biological agent, T-Virus, into the area and a horde of insatiable flesh-eating zombies has overrun the town.

A rookie police officer named Leon Kennedy finds himself embroiled in the mayhem as he embarks on his first on the job. Simultaneously, a plucky college student going by the name of Claire Redfield shows up in Raccoon City to find her missing brother, Chris, a member of the Raccoon Police Department’s Special Tactics And Rescue Service. The team was tasked with investigating the grisly occurrences at the Umbrella-owned mansion on the outskirts of town where the outbreak originated.

The story follows as they attempt to escape Raccoon City and search for survivors. They encounter a cluster of supporting characters and mutated monstrosities as they go their separate ways. 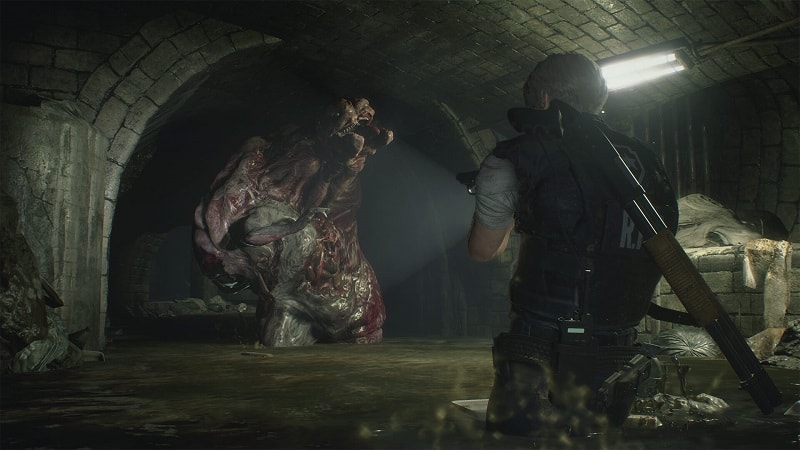 Although the original defines itself by a balance of horror and action elements, the remake puts more of its eggs into the thriller basket than its predecessor very much in keeping with the haunting, suggestive horror of Resident Evil 7. The mood remains distinctly modeled on the original, but updated to cater to the demands of a modern day horror game worthy of the name. In other words, nostalgia meets novelty.

Capcom is also injecting some much-needed realism not only through refreshed character models but to the environments as well to modernize the game and move away from the more fanciful stylistic choices seen in the original.

One of the most significant changes is a switch from a fixed camera position to a fluid over-the-shoulder third-person view. The move fits in with Capcom’s desire for a purer horror experience allowing tension, a sense of claustrophobia, and close encounters through intelligent camera work. Navigating corridors adds a whole new level of fear as light work, room setup, and sound design work to unsettle and confuse players.

The game is also overall a lot darker than the source material, with a lot more darkness for players to contend with; a flashlight becomes imperative in pitch-black corridors.

Unlike the original, the remake features two distinct campaigns for Leon and Claire. These possibly have an impact on one another, but at the time of writing, there’s no firm confirmation of this. Capcom has done away with the ”zapping system” whereby Leon and Claire gameplay elements would change depending on whose campaign was completed first, creating what was essentially four scenarios. The playable Ada Wong and Sherry Birkin segments are extended compared to the original.

Progression has been slightly rejigged to make way for the separated narrative arc, and as a consequence events may cough up subtle changes to accommodate this. 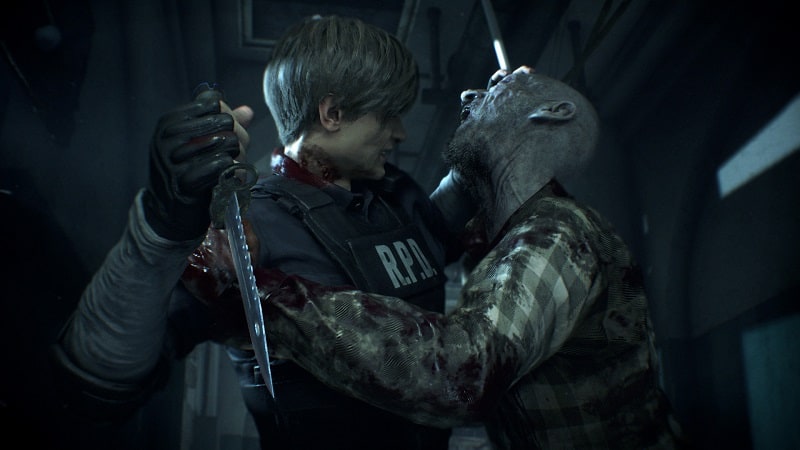 The Resident Evil 2 remake makes use of Capcom’s proprietary RE Engine used in Resident Evil 7 to bring to the life the gore and savagery of mutated and terrifying zombies. If gameplay footage released to date is anything to go by the engine is ideally suited to capture the dread Capcom are seemingly aiming to replicate.

Feeding into player nostalgia, Capcom has announced that classic costumes for Claire and Leon pulled straight from the original Resident Evil 2 can be unlocked in-game as part of the base DLC-free version.

Capcom released the minimum specifications for the Windows PC version of the game. The demands aren’t too excessive all things considered. You’ll need an Intel Core i5-4460, 2.70GHz or AMD FX-6300 or better, 8GB of RAM, and NVIDIA GeForce GTX 760 or AMD Radeon R7 260x with 2GB Video RAM.

Going by the quality of Resident Evil 7 and the ongoing success of the remastered Resident Evil Remake (now available on current generation platforms although made back in 2002), Resident Evil 2 should deliver on all fronts.

Capcom has done well to ensure an equilibrium between staying faithful to the source material while injecting the reimagining with features expected in today’s gaming landscape.

There’s a sense that Resident Evil 2 is bound to be a success given the cult status of the original. The only risk is that Capcom has tinkered slightly too much with the formula for hardcore purists to palette without kicking up a commotion.

Either way, players who were too young to sample the game when it first released in 1998 should find a wholly satisfying horror experience in Resident Evil 2.