After its trailer nearly broke the internet, it’s no surprise that both amateur and pro-gamers alike have been loving the latest addition to the Smash Bros family – Smash Bros Ultimate. 2D fighter games are a rare breed these days, and no one does it quite like Smash Bros.

As this new addition to the Smash Bros family is still in its infancy, fighter rankings so far are largely based on early tournament results and the potential seen so far in the Smash Bros Ultimate cast – the largest cast of fighters yet to be seen in a Smash Bros game!

Here we present to you our Smash Bros Ultimate tier list. Rankings have already started to fluctuate following the initial tier lists released by the likes of pro-gamers ZeRo and Leffen. As time passes and new fighter tricks are discovered you can expect the order to ebb and flow even more – watch this space for updates!

But for now, sit back, relax, grab that controller and enjoy this handy tier list to help you get the best out of your Smash Bros gaming experience. 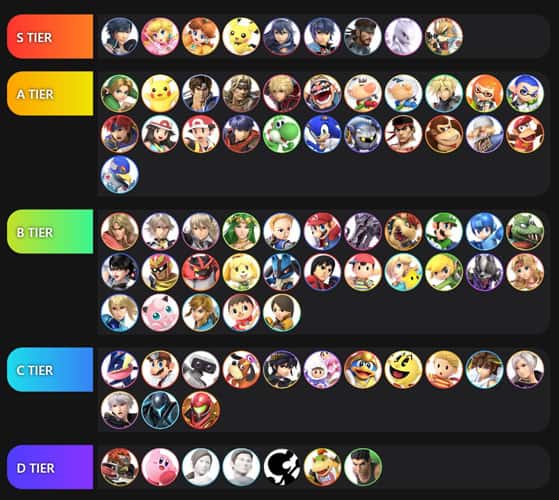 Would you move anyone up the list? Does anyone deserve to be demoted? Let us know what you think of this tier list in the comments!