Following in the footsteps of the massively popular The Division, Ubisoft isn’t satisfied with the resting on its laurels and has once again vied to wow players with the next installment in its open-world tactical co-op action RPG franchise.

Tom Clancy’s The Division 2 is being developed by the same Ubisoft-owned Massive Entertainment so we can fully expect the game to integrate a similarly dynamic world and high octane objective-based gameplay.

The question on everyone’s lips is how will The Division 2 stack up to its predecessor? Only time will tell. In the meantime, we’ve got the low down on when The Division 2 is penciled in for release, what we can expect gameplay wise, and everything in between. 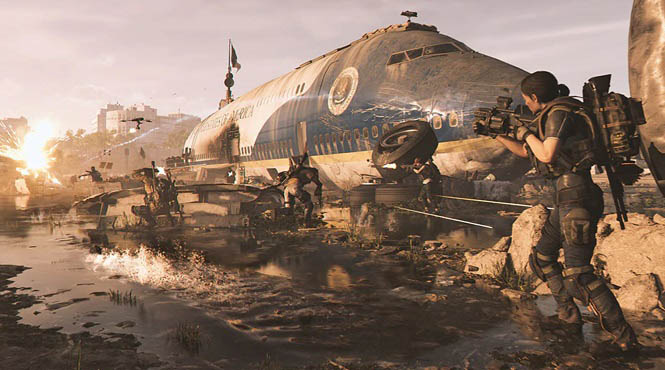 Announced as early as March 9th of 2018, The Division 2 has already been branded with a firm release date set for March 15th, 2019. Ubisoft isn’t in the business of dilly-dallying when it comes to shifting release dates. This means we can confidently expect the game to release as scheduled, barring a catastrophic and unforeseen development hurdle.

As for what platforms The Division 2 will be available on, look no further than the usual trifecta of PlayStation 4, Xbox One, and of course Microsoft Windows PC.

Unsurprisingly, pre-orders are already live and doing so nabs access to The Division 2 Beta. Otherwise, if parting with your hard earned cash this early doesn’t seem judicious, Ubisoft is running signups over on its website with a select few receiving Beta access keys.

Ubisoft hasn’t provided a firm start date for the Beta yet. If we look back at how The Division Beta was handled, it started in January 2016 before a fully fledged release in March of the same year. We can, therefore, expect The Division 2 Beta to follow a similar timeline and start at the beginning of 2019.

The Division 2 – The Story

Borrowing heavily from the original, The Division 2 hones in on a world beset by the power struggles of rival factions. Set 7 months prior to the events of The Division, the sequel is framed within the context of a civil war of sorts between the survivors of a smallpox pandemic and organized groups of roaming bandits. Authorities and the military have retreated to bunkers with civilians left to fend for themselves amid riots, shootings, and general pandemonium.

Instead of New York, The Division 2 transports players to Washington DC, a city teetering on the brink of collapse. The rule of law has all but vanished, and everyday life is characterized by a rising crescendo of increasingly credulous whispers of an imminent coup. Interestingly, Ubisoft claims to have recreated a 1:1 scale virtual Washington DC, peppered with familiar landmarks and neighborhoods, including Capitol Hill.

In another switch compared to the original, which was set at the snowy height of winter, The Division 2 takes place during the sweltering summer months.

As members of the titular Division, players form part of a squad of civilian sleeper agents who represent the city’s last chance to reign in the instability and return the crumbling streets to their former glory. With threats coming from all directions, the Division has its work cut out.

It’s the age-old story of good versus evil; a battle between the hopeful, eager to rebuild a devastated world, and opportunistic villains intent on prospering from the misery of a crumbling city. 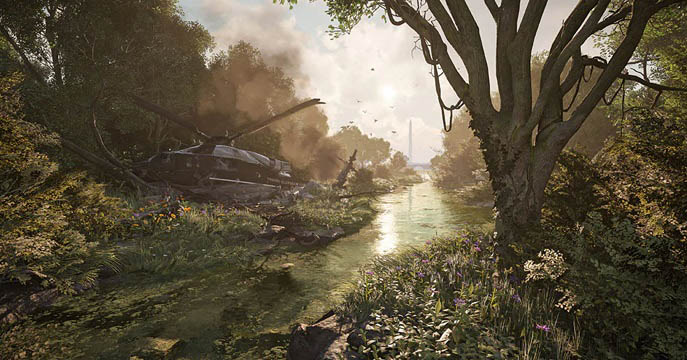 As the old adage goes, don’t fix it if it ain’t broke. Ubisoft is sticking to this with The Division 2 with many of the features of the original making a comeback. That’s not to say the game will be a cookie cutter copy of the original, but rather that Ubisoft has gathered player feedback and evolved established gameplay mechanics into a more compelling and fulfilling experience. We’re talking vastly more variety in terms of missions, customization, and progression.

In real terms, the story campaign mode returns following the narrative detailed above, while squad-based objective-focused co-op missions make a welcome return with a host of new gear, customizable agents, skills, weapons, and armor. PvP will feature as well, although Ubisoft hasn’t provided substantial details, we imagine modes similar to Dark Zones from the original.

Among the new gear is an unmanned assault drone perfect for raining down chaos on enemies, the nefarious sounding chem launcher which unleashes noxious chemicals with devastating effects, a pocket-sized airborne army of miniature drones called the hive, and the self-explanatory seeker mine.

As players approach the end game and reach the coveted level 30, specialization options become available further deepening the ability to upgrade your chosen agent. Each specialization comes with a bespoke weapon and an exclusive version of each chosen skill.

We have the survivalist, a crossbow sporting expert in environmental manipulation through traps and status effects. The explosive demolitionist whose specialty definitely isn’t subtlety thanks in part to a signature grenade launcher. Finally, we have the sharpshooter, an elite sniper who makes an impact from a distance. 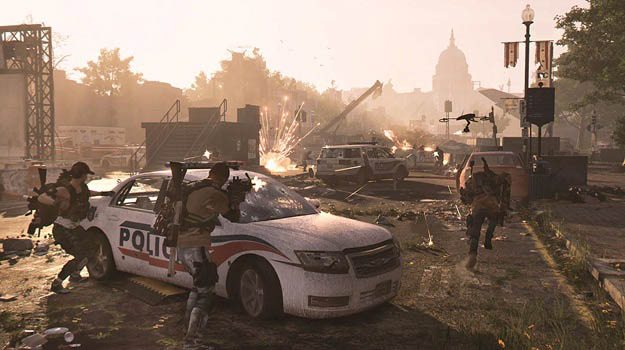 The post-release shambles of The Division didn’t portray Ubisoft in the best of lights due to limited content and a lackluster end game. It appears the gaming giant has learned its lesson and is preparing extensive amounts of content both for the release of The Division 2 and with a year’s worth of free DLCs housed under three major updates.

To spice things up further, The Division 2 also introduces Raids, an eight-player mode which borrows heavily from the multi-layered, sprawling Destiny 2 raid format. We don’t know much else at it stands, but Raids are geared to make up a large portion of post-release content from what we understand.

As for how the game is played, organization is key, as is moving fluidly as a team. Leveling up, finding the right weapon/gear build for a particular fight, and the customization options intensify the RPG-esque feel of The Division 2. We aren’t dealing with The Witcher 3 or Final Fantasy levels of RPG, but just enough to add a further layer of intrigue to the open-world shooter trope.

As with any trailer worth its salt, The Division 2 cinematic trailer, released at this year’s E3, is a gripping affair portraying a divided world through the unnerving dichotomy of the almost idyllic vegetable plots and organized detritus of the surviving do-gooders, with the chilling brutality of the villainous bandit factions.

Things have unquestionably gone awry and the world is a shadow of its former self strewn with decomposing animal carcasses, garbage, dilapidated buildings, and gratuitous violence. Ubisoft generally does well to set the tone and get the hype train going, and The Division 2 trailer is no exception.

In the gameplay trailer, also unveiled at E3, we witness a squad of Division agents embark on a heated mission to secure an objective, which is none other than the wreck of a downed Air Force One plane. Beyond contextualizing the feel of a mission, the trailer emphasizes the importance of coordinated co-op through robust communication, supportive gameplay, and timed assaults on enemies.

We also get snippets of interactions with NPCs, the dynamism of the world as seen by errant wildlife jaunting through an abandoned arboretum, and the widespread availability of loot.

That pretty much sums up everything we currently know about The Division 2. As we inch closer to release, we can expect another trailer or two, and once the Beta starts in earnest at the beginning of 2019, we should gain more insight into what’s in store.

If Ubisoft’s claims of building upon the foundations of the original and creating a more fleshed out experience are to be believed, then The Division 2 is primed to secure itself a berth as one of the standout releases of 2019.