Creative Assembly is once again stretching its turn-based strategy muscle and taking players to the tumultuous fall of the Han Dynasty in feudal China with Total War: Three Kingdoms.

As the thirteenth mainline entry in the long-running Total War series, Total War: Three Kingdoms is touted as ”the most memorable and incredible Total War game yet”, catapulting players to a period in Chinese history gripped by violence and the machinations of Warlords competing for the coveted title of the next emperor.

As Creative Assembly’s first foray into Chinese history, how will Total War: Three Kingdoms compare to its predecessors that have covered locations as diverse as Japan, Rome, and even the fictional Warhammer world? 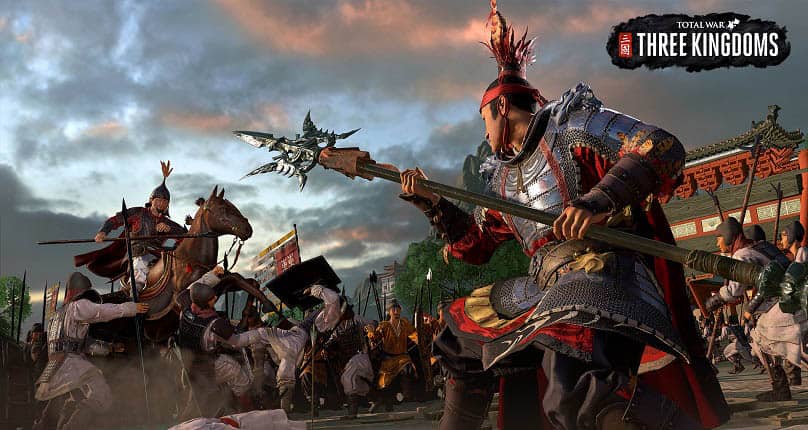 However, amid the furor of E3 2018, the developer gingerly revealed the title had been delayed to Spring 2019 to give ”it the time it needs to reach the highest levels of quality”.

In September 2018, Creative Assembly and publisher SEGA confirmed the title would release on May 23, 2019, for Windows PC via Steam, while the porting wizards over at Feral Interactive were working on both a macOS and Linux version set to drop not too long afterward.

Pre-orders opened shortly after offering those parting with their coin early via a SEGA approved retailer, or within the first week of release, an exclusive Early Adopter bonus dubbed the Yellow Turban Rebellion DLC.

The DLC adds three additional playable Warlords (He Yi, Gong Du, and Huang Shao), three hero classes (healer, scholar, and veteran), new character skills (frugality, compassion, and humility), and new weapons/armor. If you miss out on the pre-order, fret not as the DLC will be available for purchase a week on from release. 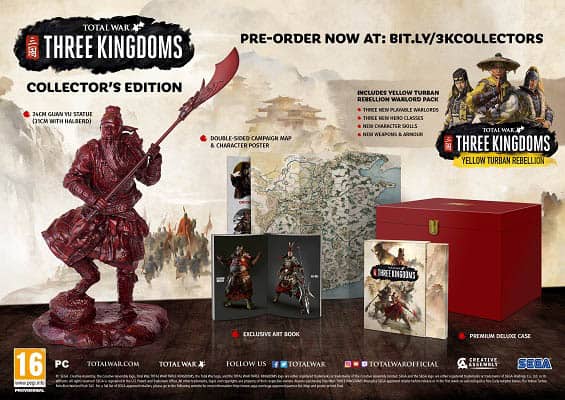 Creative Assembly has also compiled a Limited Edition featuring a premium deluxe case adorned with concept art, a double-sided poster with the campaign map on one side and a breakdown of the game’s Warlords on the other, as well as the aforementioned Yellow Turban Rebellion DLC.

For the true Total War buff, Creative Assembly is offering a Collector’s Edition with a treasure trove of goodies including a 24cm Guan Yu statuette, an exclusive art book, and everything from the Limited Edition all housed in a sleek red presentation chest.

The debut trailer for Total War: Three Kingdoms burst onto the scene on January 10th, 2019, announcing the game with a cinematic layered with an emotive voice over. Scenes of massive armies led by dueling Warlords interspersed with animated concept art made up a big chunk of the trailer. Overall it hints at an era of turmoil, as an empire divides and power shifts.

At E3 2018, Total War: Three Kingdoms did the rounds with two new trailers. The first trailer honed in on an in-engine introduction to the poised and venerated strategic mastermind, Cao Cao, as he lays claim to the throne. We also get our first short glimpse of an in-game battle.

The second trailer on show at E3 2018 was a bonafide pre-alpha gameplay demo, which runs through the events of a single battle. Hero Lu Bu faces off with Cao Cao, as he sieges Lu Bu’s stronghold. We get a look at the UIs, the battlefield itself, and general mechanics including specific items and unit strengths. Thousands of troops fight it out before we witness the newest addition to Total War: Three Kingdoms, hero duels.

Creative Assembly returned in August 2018 with a fresh hero trailer, this time showcasing the aggressive risk-taker Sun Jian as well as a look at the vast and gorgeous campaign world map.

Shortly afterward, a Let’s Play demo of the Ambush of Sun Ren popped up at Gamescom 2018.  After providing historical context for the ambush, the trailer dives into the battle itself. Bathed in the piercing silver light of the moon and nestled among the branches of a thick forest, the two armies vie for tactical supremacy.

Reinforcements arrive, and the player’s army is suddenly outnumbered, prompting a strategic decision to flee. The trailer stresses the importance of heroes, their buffs, and how retreat forms part of broader strategies.

In conjunction with the release date announcement in September 2018, Creative Assembly published a trailer for the exclusive pre-order DLC Yellow Turban Rebellion. It follows an uprising by angered peasants that although botched sent shock waves through the tenuous authority of the ruling elite.

In November 2018, Creative Assembly released a double bill of trailers focusing on the brand new diplomacy system, depicting much of the out of battle gameplay of the title. Accompanying blog posts share a torrent of details about the most significant change to Total War‘s diplomacy mechanics since the franchise first began.

Last but not least, the most recent trailer emerged in December 2018 and showcased hero Zheng Jiang, a bandit leader known for her ruthless pillaging and deep-set disdain for the status quo. 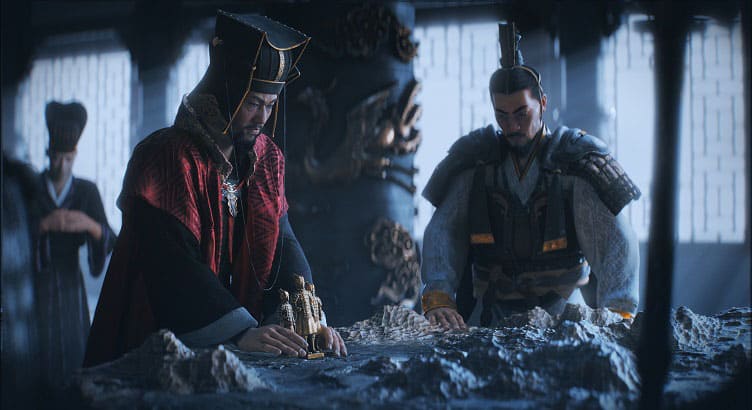 Total War: Three Kingdoms begins in 190 AD with the once illustrious Han Dynasty teetering on the verge of dissolution. The emperor, Xian, is an eight-year-old child who serves merely as a puppet to the Warlord Dong Zhuo, who rules the fractured land with an oppressive iron grip.

Fragmented Warlords enter into a fragile alliance under one banner to topple Dong Zhuo’s dominance setting off a period of unrest characterized by shifting allegiances, betrayal, and war told through the story of the heroes that shaped history. Ultimately, China partitions into three distinct kingdoms, hence the title, known as Cao Wei, Shu Han, and Sun Wu, each claiming a portion of the vast Chinese territory. 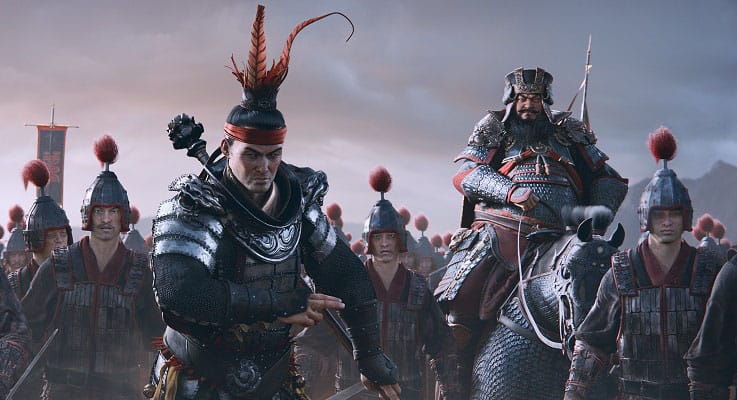 Creative Assembly is quick to qualify that the period is looked upon in almost mythological terms due to the ubiquity of the 14th-century celebrated historical novel Romance of the Three Kingdoms, which depicts a dramatic and romanticized version of events with heroes bestowed with superhuman strength.

To offer both a romanticized take on history for entertainment purposes and a factual account of events (to avoid any backlash at having taken creative liberties – going so far as to hire respected historians to ensure the integrity of the narrative), Total War: Three Kingdoms has two distinct campaign modes.

The Romance mode follows the epic events from the novel, while the Classic mode takes a far more realistic view by sticking to the 3rd Century text, Records of the Three Kingdoms. The tome is a much drier, factual compendium of dates, events, battles, taxes, and the like devoid of any aggrandizing tales of lone men defeating entire armies single-handedly. 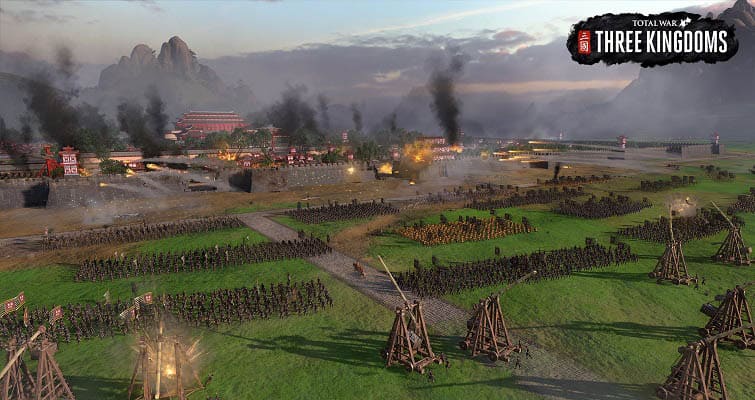 Total War: Three Kingdoms recycles the well-established gameplay loop from the Total War franchise divided between the turn-based strategy of the campaign worldview and the real-time tactical battles.

Where Total War: Three Kingdoms diverts from the straight and narrow is with greater importance placed on characters and heroes. A vibrant cast of intriguing characters defines the period mythologized for their military prowess.

Creative Assembly is tapping into this with relationships, allegiances, rivalries, motivations, and personalities determining how the campaign moves forward.

In the Romantic campaign, heroes exist as lone units on the battlefield commanding entire retinues of soldiers with unique abilities and skills, while in Classic mode, they’ll appear as they do in previous Total War games with the focus on the strategic use of troops rather than superhuman feats of strength.

As Creative Assembly puts it ”Classic mode is all about tactics and statecraft, while Romance is more about personal bravado and individual martial prowess”. Additionally, the narrative in Romance is much more dependent on player choices, while Classic adheres strictly to chronological events. 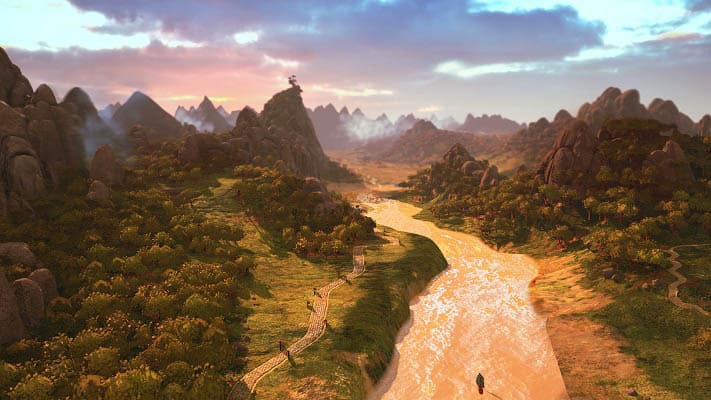 Only three heroes can be on the battlefield at any given time and call upon one type of unit each to whom they bestow active and passive bonuses. Each hero fits within a class ranging from strategist, commander, to champion, and Vanguard. They also have their own set of strengths, playstyles, and political objectives.

The title also introduces the ”guanxi” mechanic, whereby heroes interact directly with one another through dynamic interpersonal relationships based on shifting allegiances, history, and personal temperament, which can either offer buffs on the battlefield or make winning a battle trickier. Players have to manage the needs of each hero to ensure moral and, by extension, performance on the battlefield.

Furthermore, the player’s relationship with each of the heroes is also shaped by the ”guanxi” system with the outcome of battles and decisions having a direct impact as well.

They can also duel opposing heroes, turning the tide of battle by either winning or losing the faceoff. Fallen heroes are lootable for precious items that add buffs.

Combat sticks to traditional Total War set pieces, like open field battles, sieges, and ambushes. The map itself is among the largest to feature in a Total War game and depicts a resource-rich country brimming with mountain peaks, snaking rivers, open planes, and landmarks like the Great Wall of China. 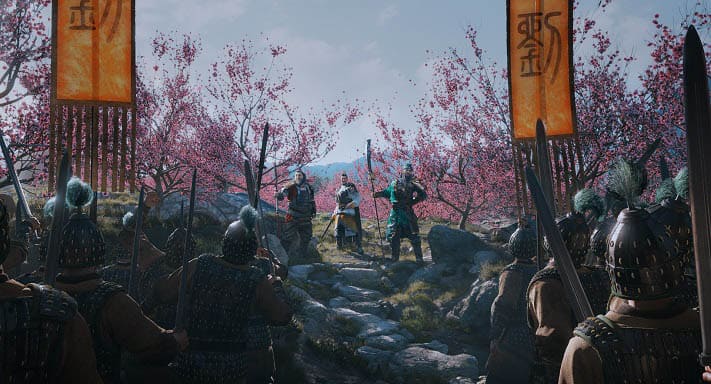 Continuing the lively modding history of the Total War franchise, Total War: Three Kingdoms is set to be mod friendly via the Assembly Kit (a set of tools to facilitate modding) and Steam Workshop support. As it stands, the game won’t support modding at launch, but Creative Assembly plan to introduce it shortly afterward.

In the lead up to release, Creative Assembly is publishing detailed biographies of each of the 11 Warlords and their factions. Packed with historical facts and an outline of each of their roles in the establishment of the Three Kingdoms, they are well worth a gander for players eager to delve into the narrative behind Total War: Three Kingdoms.

Creative Assembly hasn’t published minimum and maximum PC specification requirements as of the time of writing.

It’s fair to say that Total War: Three Kingdoms is Creative Assembly’s most ambitious Total War title yet. The introduction of new mechanics and features is sure to add even more depth to the tactical and political aspects of the series.

The Ancient China setting is an intriguing one. By opting for this historical era, Creative Assembly is finally giving fans what they’ve been asking to experience for many years now.

As always, ambitions and final products can be profoundly disparate, but if Creative Assembly can pull it off, we are undoubtedly looking at the definitive historical turn-based strategy game.