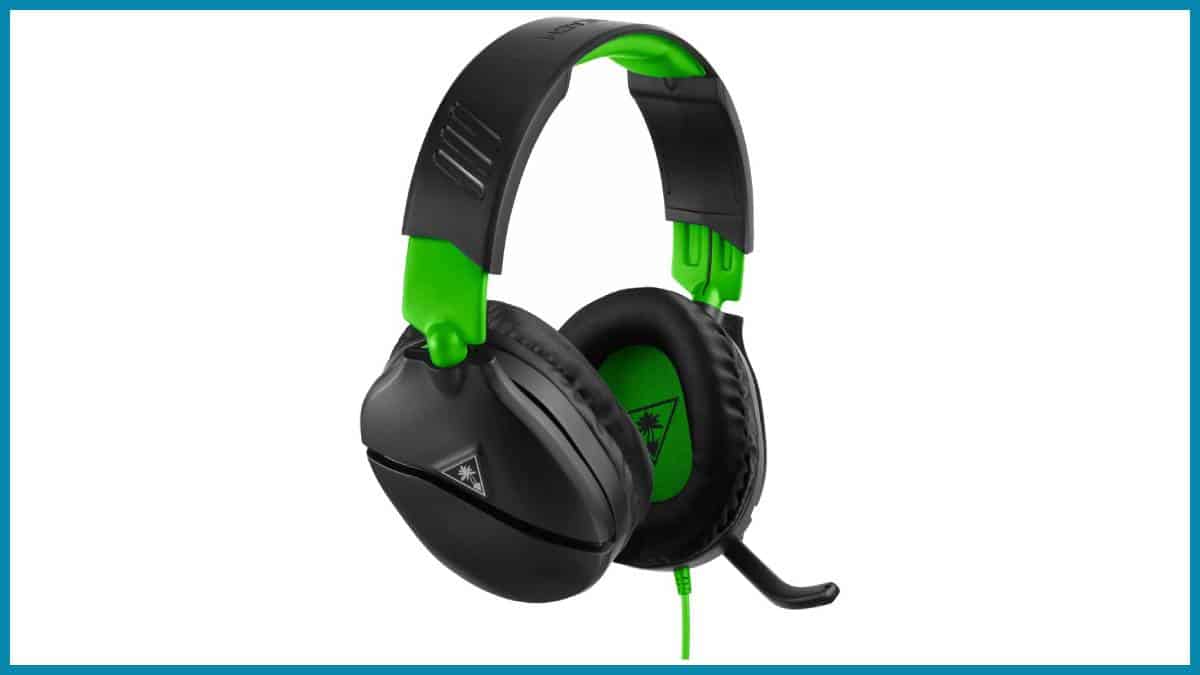 It’s not everything day that we get a high-brand headset for as little as $40, but Turtle Beach managed to condense everything we love about gaming headsets into one budget model with great sound, a sturdy and comfortable build, and a decent microphone.

It does have its shortcomings, but for this price range, the Recon 70 is easily one of the most appealing headsets you can get.

Gaming headsets are generally replete with both functional and aesthetic features geared to either give you a tactical edge in online multiplayer or to immerse you into the world of single-player games fully. But all these cool features also raise the price, to the point where there aren’t many high-brand models in the budget price range, especially if we define budget as sub-$50.

So it was a pleasant surprise when Turtle Beach, of all manufacturers, gave us the Recon 70 – a $40 gaming headset that’s compatible with all the devices you could possibly want to game on. But let’s see whether they’ve managed to keep the core of what makes Turtle Beach headsets so great while shaving away all the excess features.

Right from the get-go, the Recon 70 has that distinct Turtle Beach look to it. It has a black headset with different colored accents that correspond to the three major consoles of this generation – green, blue, and red for the Xbox One, PS4, and the Nintendo Switch, respectively. There are also white versions of the Xbox One and PS4 headsets for some added variety, but it’s a shame there’s no all-black or grey version for the people who like a more subtle look.

However, it’s important to note that there are no differences between these three variants of the headset aside from the colors. And we’re not trying to say that this is essentially the same headset with three variants, each compatible with a single console. No – there are no differences between these three variants whatsoever, compatibility included. This means that you can plug in your red Nintendo Switch-themed Recon 70 into both the DualShock 4 or the Xbox One Controller, and it would work just like it does with the Nintendo Switch.

It even says so right on the box, but the promotional material and general naming scheme of the headsets could easily lead you to believe otherwise. At this point, few would even bother trying to read the fine print on the box, so we felt we had to emphasize this point.

In fact, since it uses the standard 3.5mm input, the Recon 70 is also compatible with smartphones and PCs. So while you do have to suffer a wired connection, it does offer unparalleled versatility in terms of connectivity. Just keep in mind that the cable length is more appropriate for console use than most PC setups.

As expected from a $40 headset, the Recon 70 doesn’t feel premium to the touch. It feels like a budget headset, and this can be mostly attributed to the all-plastic build. However, we also wouldn’t be doing our job properly if we failed to mention that this headset is also very sturdy and that we have no qualms about durability. It’s got a fair bit of flex to it, so it’s going to take something more extraordinary than the everyday wear and tear to break this pair of cans.

The only potential cause for concern is the fact that the cable isn’t removable, so you have to be careful not to damage it else this could spell doom for the entire device. The non-braided nature of the cable doesn’t help much, but again, this shouldn’t be an issue so long as you treat the headset with at least some modicum of care.

That’s pretty much all we have to say for the build here since the affordable price tag of the Recon 70 simply necessitates a lack of any extra features. The ear cups feature just the microphone and a discrete volume wheel, but from what we’ve seen so far, this isn’t an issue.

Plastic is generally not an indicator of high-quality. Still, it does invariably unlock the lightweight perk in almost all the headsets that prominently feature it, and the Recon 70 is no exception.

At first glance, you might be worried about the padding on the headband that can only be described as scarce, but in reality, the Recon 70 doesn’t push into your head at all. It’s also highly adjustable, with both swiveling ear cups and an extendable headband, which all but guarantees a stable fit.

The padding on the ear cushions isn’t super thick, but it gets the job done, which is all you can really ask for in this price range. It’s hard to complain about synthetic leather when you’re getting a sturdy, quality-made headset that can be plugged into virtually anything at this price. Yes, it doesn’t do the best job with noise isolation, but this can easily be forgiven. Most importantly, the Recon 70 is just comfortable, plain, and simple.

There may be some discomfort during a genuine gaming marathon, but it can handle most gaming sessions with quite literally no sweat, even prolonged ones.

A subpar microphone can single-handedly ruin an otherwise perfectly fine headset, so we were anxious to see how Turtle Beach treated the mic as they were shaving away features to meet the desired budgetary restrictions.

Thankfully, our anxiety was unwarranted.

Overall, the mic on the Recon 70 is perfectly serviceable. It delivers a clean and intelligible sound if a bit muted.  Still, for the purposes of voice chatting in online multiplayer games, your teammates should have no trouble understanding every word you say. Just be careful not to shout into their ears, since the lack of mic monitoring does naturally urge you to raise your voice.

Overly loud or not, sometimes, your words will be backed up by a chorus of ambient noise since the mic isn’t the best at separating this noise from your voice. But you can’t really expect to game away without any issues while someone is vacuuming in the same room or using the blender; even many more expensive microphones fail to accomplish this.

Thankfully, you can easily mute the mic in these cases by flipping it up so that it hugs contours of the ear cup. This is quickly becoming a go-to method for handling non-removable microphones, and we’re glad to see it implemented in such a budget-friendly headset as well.

And while the microphone on the Recon 70 didn’t do anything to wow us, it also didn’t leave us wanting more. It has some issues, but what budget headset microphone doesn’t?

Finally, let’s take a look at what kind of audio quality this headset delivers.

Packed with 40mm neodymium magnets and Turtle Beach’s very own audio tuning, the Recon 70 had the potential to blow the competition out of the part in the low budget range.

The most important thing to know about the sound of the Recon 70 is that it was made, first and foremost, with gaming in mind. This makes it very good for gaming, but decidedly less so for multimedia.

And no sound feature embodies this audio tuning philosophy quite as succinctly as the over-accentuation of frequencies that are generally used for the most relevant audio cues. The sounds of footsteps and weapon reloading sit a bit forward compared to the rest of the frequency range. Together with the virtual Dolby Atmos surround sound (which can only be activated on the Xbox One and PC), the Recon 70 is capable of offering a high degree of positional awareness sprinkled with a tinge of tactical advantage.

But these forwarded high frequencies can also be jarring at times, even in games that they were actually made for. It’s awesome being able to hear an enemy reload from a street away, but hearing this over the thunderous boom of a rocket launcher missile finding its mark sounds less than natural. And this goes double for games of different genres, where the unnatural tuning really makes things sound off.

In particular, we can’t praise how the headset handles dialogues. It’s not bad to the point of ruining the experience in more story-driven games, but you definitely get the sense that these cans were made to enhance action-oriented set pieces more than they were made to help engage you with the characters’ more contemplative scenes. And funnily enough, this goes for out-of-game dialogues as well, since the lack of any sound mixing feature makes it so that you sometimes can’t hear your teammates over the in-game noises.

Nevertheless, it would be unfair to say that the Recon 70 doesn’t perform well across all genres. It just favors some slightly more than others.

Well, that depends on many factors.

Budget headsets generally excel in some ways while lacking in others. The Recon 70 is incredible in the sense that there’s nothing about it that’s subpar or even below average for the price range. However, it’s a headset we can wholeheartedly recommend only to those who wish to look into its strengths.

If you need a budget headset to use with both the PC and one or several consoles, this is it.

If you need a budget headset that can give you a competitive edge in online multiplayer games, this is it.

A good microphone, no lack of comfort, durable build – the Recon 70 delivers on all fronts.

But if you need a budget headset that can handle music as well as gaming, it’s not the best choice you can make. In addition, it also doesn’t fare well outdoors due to the relatively short cable.

If you’ve got the extra bucks, you won’t regret investing them into something a bit more expensive like the Stealth 600, but all in all, the Recon 70 gets an A for Awesome so long as you don’t plan on using it for music.