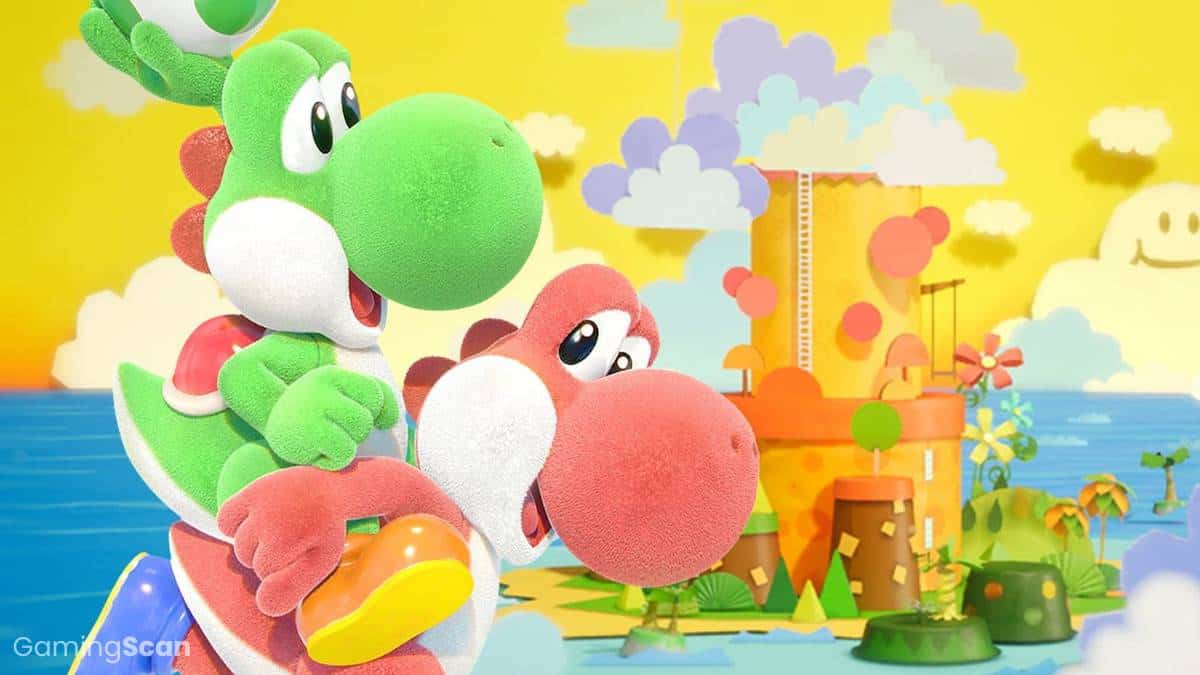 Yoshi has come a long way from his days of carrying Baby Mario on his back and baking cookies shaped like his own head.

Nowadays, he spends most of his time wrapped in wool or crafting new adventures on the Switch. And while Nintendo has always maintained a certain innocent charm when it comes to the green dinosaur’s solo titles, the challenge of finding every smiley flower, red coin, and hidden object can be anything but.

Yoshi’s Crafted World spends most of its time trying to strike a balance between the two, offering both a lighthearted narrative set in a colorful world and a demanding platformer that, at times, requires precision-timing. So how does Yoshi’s latest journey stack up against a long line of Stories, Islands, and one Woolly World?

From the moment the title screen appeared, and I heard the cheerful main theme, childhood memories of playing Yoshi’s Story on N64 came flooding back.

While nostalgia can often be dangerous, its presence here serves as an example of the consistency and careful consideration present in first-party Nintendo games.

In most of my gaming experience, I find background music to be mostly forgettable, rarely sticking with me once I’ve put down the controller. However, the 22 different tracks that make up Yoshi’s Crafted World’s OST feel like they’ve taken over a part of my brain, for better or worse.

From the cheerful melodies that play at the start of your journey, to the menacing drum-heavy beats that play during boss battles, Crafted World always does a great job at setting the scene with its music.

This is perfectly complemented by the game’s visual style, which looks as carefully-handcrafted as Woolly World did, swapping out softer fabrics for more tactile, cardboard-textured backgrounds. This makes every level seem like a diorama that could have been crafted by a kid for a school art project and covers a wide selection of themes ranging from a lush jungle, a spooky forest, a Japanese dojo, the wild west, outer space, and the list goes on.

Developer Good-Feel has been on a hot streak when it comes to designing the art for Yoshi and Kirby games, stemming back to Kirby’s Epic Yarn on the Wii.

What caught my attention most about the game’s presentation is the amount of detail that was put into creating Yoshi’s costumes, a new feature for Crafted World. These unique outfits match the game’s DIY-aesthetic and always line up with the theme of the world you received them in.

Some of my favorites include an old train railcar that comes with a metal chimney pipe-hat that Yoshi wears on his head and another that resembles a bullet bill whose arms will bash about whenever Yoshi flutter jumps.

There’s also the fact Crafted World features fully animated cutscenes, which I didn’t anticipate at all. These scenes make the experience more immersive, thanks to cinematic camera angles and player decided actions that you get to see play out on screen. This led me to feel more invested in the game’s story and its world.

The story begins with the Yoshis living peacefully on Yoshi’s Island, where at its peak rests the Sundream Stone, a relic that possesses the power to make anyone’s dreams come true.

Bowser Jr. and Kamek attempt to steal the stone and use it for evil, but in a struggle with the Yoshis, they lose grip, sending the Sundream’s gems flying across the world.

The Yoshis then set out on an adventure to reclaim all of the gems and restore harmony to their island with the evil duo attempting to thwart their efforts at every turn.

The events play out exactly as you’d expect, and seeing as this is a Yoshi game, don’t expect any M. Night Shyamalan-style twists. The game’s simplistic narrative is elevated by the personalities and interactions of the characters, namely Bowser Jr. and Kamek. They have an ‘all-knowing nanny vs. spoiled brat’ dynamic that becomes increasingly funny as the game progresses.

The platforming in Yoshi games hasn’t changed much over the years. You still have the super useful flutter jump, which allows Yoshi to extend his time in the air, as well as his egg-throwing power for hitting those ever-elusive question-mark clouds.

I played the entire game on Normal mode with no issues. However, the game does feature a Mellow mode that’s intended to make the experience drastically easier for younger or inexperienced players.

Unlike previous Yoshi titles, Crafted World is a 2D game played on a 3D plane and features an aptly named ‘switch’ mechanic that changes the camera’s POV to reveal objects in the background. This mechanic is mostly used for finding hidden smiley flowers and red coins and adds a lot more depth to the game’s tactile world. However, I would have liked to see this mechanic incorporated more in both puzzles and story sections.

As you reach later levels, the game begins to introduce new mechanics and ideas that are never fully built upon. For example, some of the spookier levels incorporate a stealth mechanic that relies heavily on timing. Once you’ve cleared this world, you never see the idea used again. I would have liked to see newer levels incorporate ideas from previous ones, rather than ditching them altogether.

Overall, the game controls well with no technical hiccups. There’s a good amount of different enemies to encounter, and an even heftier selection of level designs spread across its 16 sub-worlds (plus one bonus one), making replaying levels to collect items I previously missed feel a lot less tedious. Levels are bite-sized enough that you’ve completed them long before you start to grow bored without being too brief to the point that you’re left craving more.

Another feature that I highlighted earlier and didn’t anticipate I’d enjoy as much as I did was purchasing costumes for my Yoshi. They can be bought at gumball machines in each of the game’s worlds for in-game coins and come with assigned rarities for each outfit. Not only did this system encourage me to collect every coin I found, but the endorphin rush from seeing a super rare costume come out the machine was just as exhilarating as playing the actual game. In an era where microtransactions are a very controversial and divisive topic, it’s interesting to see Nintendo provide their playful spin on the concept of loot boxes.

One of my favorite things about Yoshi games – and something that’s completely lacking in Crafted World – are Yoshi transformations, in which he shapeshifts into an inanimate object like an umbrella or rocket ship. The closest Crafted World gets to this is letting you hop inside a giant robot Yoshi that goes around punching things. I would have liked to see the game explore this feature further and have the green dinosaur take on different shapes that fit in with the ‘arts and crafts’ theme of the game.

Local co-op in Crafted World can be hit or miss – and I mean it literally. You’ll frequently find yourself flinging an egg at your fellow Yoshi more than the target you were aiming for behind them.

Playing in co-op has some benefits, like being able to jump significantly higher by launching off of your buddy’s back, or swallowing your teammate and using them as ammo when you find yourself out of eggs.

However, there are some fundamental issues with traversal and aiming that led to a handful of heated debates between my girlfriend and me during our playthrough.

The game has a pretty loose radius with deciding when to lock you onto your teammates back, and attempting to jump over your partner often results in you landing on them instead.

There’s also the fact that Yoshi can’t fire eggs while another one is on its back, meaning you can be in the middle of aiming a shot and have it interrupted by your friend, whether on purpose or by accident.

Since the game takes place on a 3D plane, some issues do arise when aiming shots, particularly at objects in the background. For one, eggs will ricochet off your teammate, even if the object you’re trying to hit is behind them. Second, the game won’t always lock on to the object you want to hit, meaning you can find yourself in a situation where you accidentally lose your only remaining egg.

These small issues can easily overlap during more chaotic sections, sometimes making Crafted World more stressful than it should be.

Despite its minimal flaws, Yoshi’s Crafted World is a competent platformer that’s relaxing and fun to play. The game may not be as much of a revival for the Nintendo mascot as Breath of the Wild was for Link, or Odyssey for Mario. Still. it does a great job at presenting its lighthearted story and colorful world. Now that Yoshi’s made his way to the Switch, I’m excited to see what Nintendo has in store for the green dinosaur in the future.