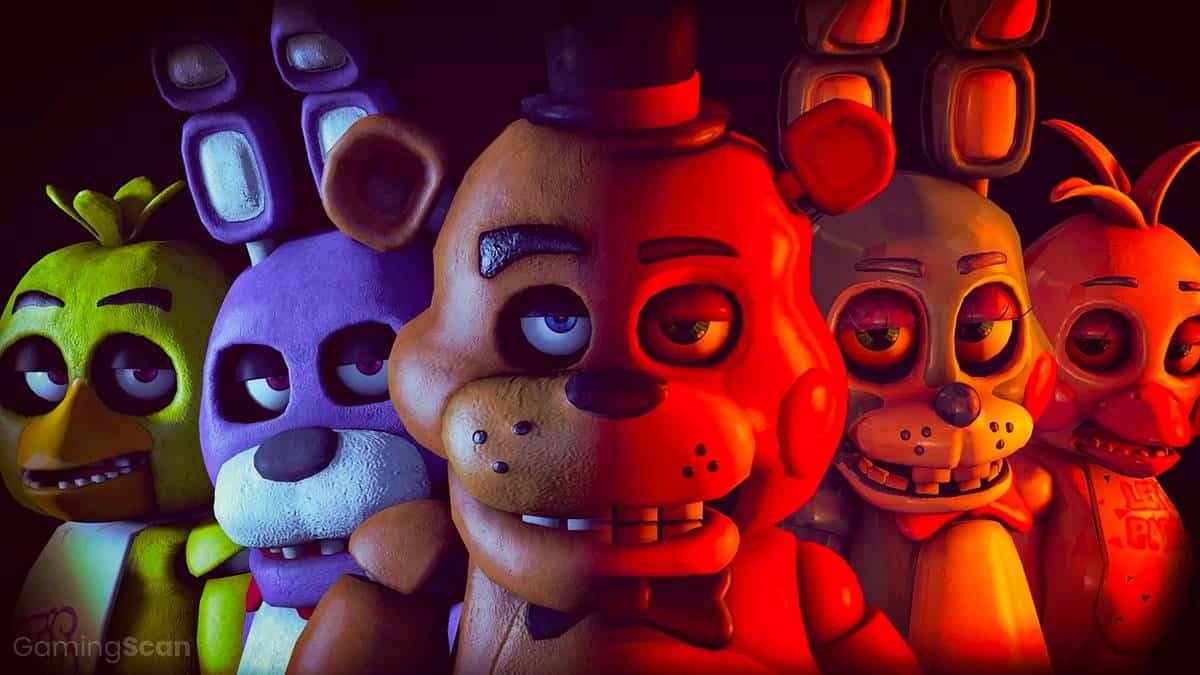 Five Nights at Freddy’s is an indie survival horror game series about evil animatronic mascots that come to life at night and roam around looking for their next victim.

Due to the franchise’s extensive lore and even more complicated storyline frequently debated by fans, it can be tricky to pin down exact events and create an accurate timeline.

However, in this list, we’ll attempt to do just that by exploring all of the FNAF games in order of release date and lore, including the main series and spin-off games.

Last but not least, we’ll be updating this list following any new FNAF announcements in the future, so make sure to check back! 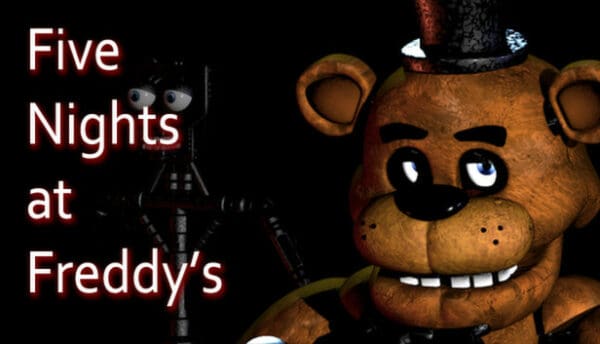 The first FNAF game was released in 2014 by series’ creator Scott Cawthon and sees players taking on the role of a security guard named Mike Schmidt during his first shift at Freddy Fazbear’s Pizza.

The goal of the game is to survive five hellish nights at the family pizzeria as its animatronic performers become increasingly hostile as the nights progress.

Five Nights at Freddy’s centers on four animatronic characters: the titular Freddy Fazbear along with Bonnie, Chica, and Foxy, each of which can be avoided by monitoring cameras and locking the doors.

Following its release, FNAF received substantial praise for its originality and horror elements before garnering a cult following and becoming the subject of popular Let’s Play videos. 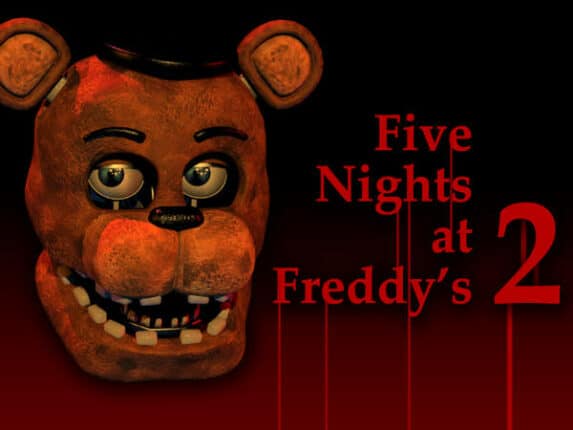 In the same year, Scott Cawthon released Five Nights at Freddy’s 2, a prequel that builds off of the original by introducing remodeled characters as well as two completely new ones.

In it, players control a new security guard, Jeremy Fitzgerald, as he tries to survive each shift while Freddy, Bonnie, Chica, Foxy, “The Puppet” Marionette, and Balloon Boy relentlessly pursue him.

As the game progresses, it’s revealed that this particular Fazbear’s Pizza location is being investigated by the police and it’s implied that multiple children were killed there by an unknown individual.

FNAF 2 was met with positive reception from critics praising its panic-inducing gameplay and expanded number of enemies while taking issue with its steep difficulty compared to the first game. 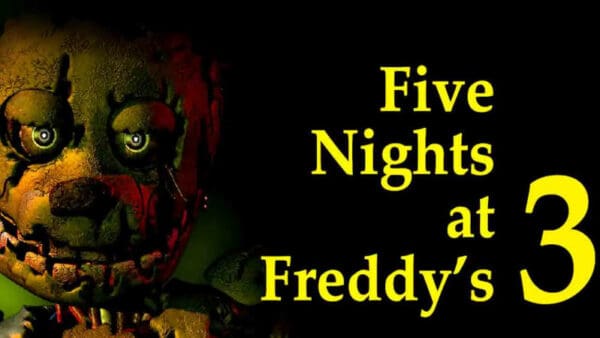 Five Nights at Freddy’s 3 is the third installment and chronologically takes place thirty years after the events of the original in a horror-themed attraction based on Fazbear’s Pizza.

Players are cast as an unnamed security guard assigned to watch over the facility and keep an eye out for a decrepit animatronic named Springtrap that likes to roam freely at night.

Seeing as the game goes to great lengths to never reveal the protagonist’s name, some fans speculate there’s a deeper meaning to their identity and that it may even be Michael Afton.

Compared to its predecessors, FNAF 3 was less well-received, with some praise regarding its darker and grittier tone as well as criticisms about its over-reliance on jumpscares and uncharismatic characters. 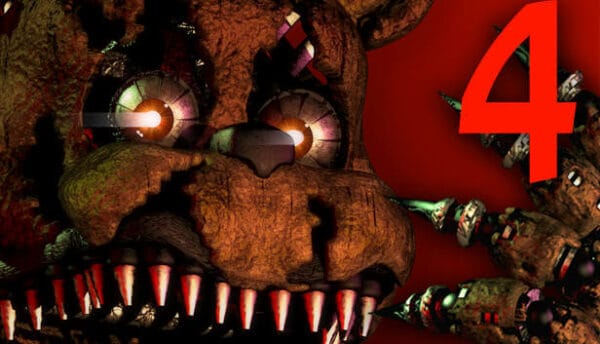 Unlike previous entries which were all set in security offices, Five Nights at Freddy’s 4 takes place in a child’s bedroom where the player must avoid being attacked by the original Fazbear’s Pizza crew.

The player’s only means of defense is a flashlight with unlimited batteries that can be used to fend off the animatronics during each night.

The story is told through a series of playable minigames that reveal the main character was teased by his peers for being fearful of Fazbear’s Pizza, later resulting in a tragic accident that causes his death.

Upon release, FNAF 4 was met with mixed reviews as some players enjoyed the emotional storyline and reworked mechanics while others found the new gameplay a bit too confusing. 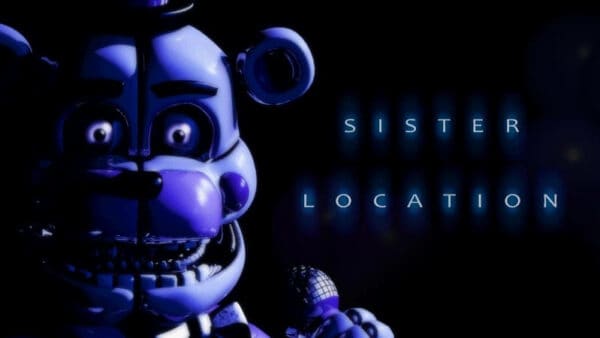 Sister Location is the fifth installment in the series and differs from previous entries in that players are no longer confined to a single room and can move between locations to complete various tasks.

In it, you play as Michael Afton, the son of William Afton, creator of the game’s animatronic characters and new employee of Circus Baby’s Entertainment and Rental, a sister location to Fazbear’s Pizza.

Each night, Michael is assigned tasks by an assistant A.I. HandUnit and must avoid circus-themed variations of Funtime Freddy, Bon Bon, Funtime Foxy, and new characters Ballora, the Bidybabs, the Minireenas, and Circus Baby.

In the end, the game received mixed reviews from critics praising its story and voice performances but taking issue with some aspects of gameplay. 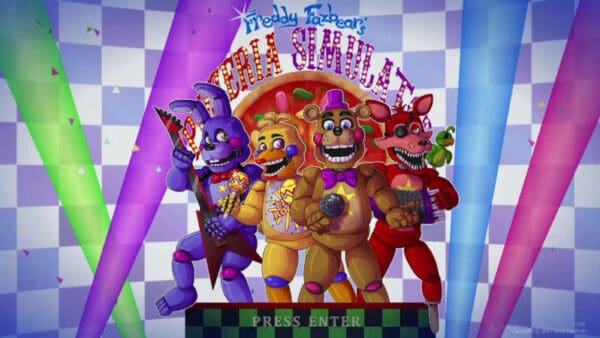 Often referred to as FNAF 6, Freddy Fazbear’s Pizzeria Simulator is set chronologically after FNAF 3 and was marketed as a free simulation game where players manage their own Fazbear location.

However, once you make it past the management sim component, the gameplay switches to the traditional FNAF concept where players try to survive an onslaught of evil animatronics.

This includes a new Circus Baby rebuilt from scraps, Molten Freddy, Lefty the black bear, and Springtrap or “Scraptrap,” built with Spring Bonnie’s worn-out costume and the undead body of William Afton.

Following its release, Pizzeria Simulator was met with mostly positive reviews is regarded by fans as a unique and exciting evolution of the FNAF formula. 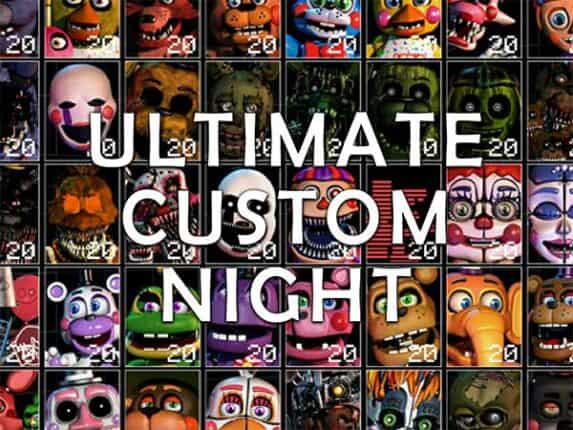 Ultimate Custom Night, also known as FNAF 7, is the seventh canon game in the series and was originally intended to be DLC for Pizzeria Simulator before becoming a standalone game.

Players choose from 50 characters that appear throughout the series and set custom difficulty levels, earn Faz-Coins to buy power-ups, use plushies to stop certain animatronics, and Death Coins to eliminate enemies from the current night.

While the game appears to be non-canon at the start, certain lines of character dialogue suggest the player character is William Afton after having died in FNAF 6 and getting trapped in purgatory.

Considering the game was released for free, it was relatively well-received by critics and fans for its unique, customizable take on the classic FNAF formula. 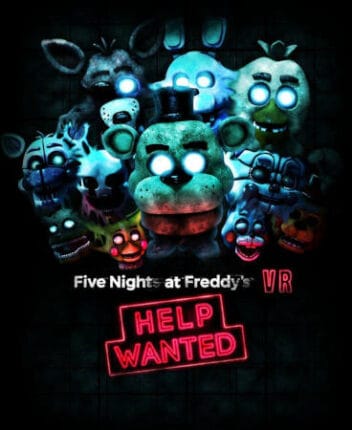 Commonly referred to as FNAF 8, Help Wanted was originally released as a VR title developed by Steel Wool Studios and published under ScottGames in May 2019, with a non-VR version released later that year.

The game presents itself as “The Freddy Fazbear Virtual Experience,” an in-universe product designed to restore Fazbear’s public image after years of lawsuits from tragic events at various locations.

Depending on the player’s choices, there are four endings to the game following the ultimate reveal that one of the animatronics, a humanoid rabbit named Glitchtrap, is the digital ghost of William Afton.

Five Nights at Freddy’s: Help Wanted was met with warm reception, particularly for its effective use of virtual reality and ability to introduce new mechanics while maintaining the series’ feel and atmosphere. 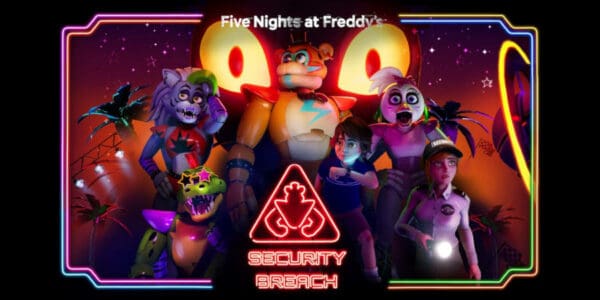 Five Nights at Freddy’s: Security Breach is the ninth and most recent installment in the series and was also developed by Steel Wool Studios and published by ScottGames for PC and PlayStation consoles.

The story takes place after Help Wanted and sees you playing as a kid named Gregory who ends up trapped inside Freddy Fazbear’s Mega Pizzaplex overnight.

Players try to survive the night by evading animatronics Glamrock Chica, Montgomery Gator, Roxanne Wolf, and many more, with help from a now-friendly Glamrock Freddy.

Upon release, Security Breach was met with mixed reviews due to the significant number of bugs and technical issues present at launch but was also praised for its atmosphere and new mechanics. 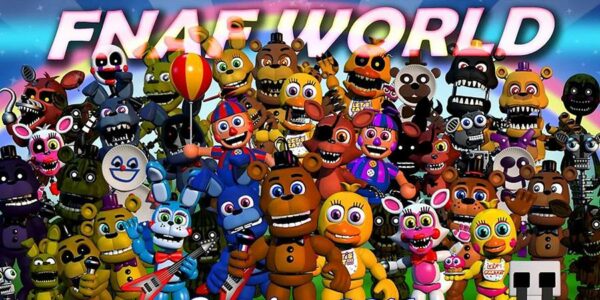 FNaF World is the first official spin-off to the series and the fifth game overall, releasing in 2016 (PC) and 2017 (mobile) before eventually being removed from all digital storefronts besides GameJolt.

Gameplay deviates from the classic FNAF formula and sees you exploring different areas, encountering enemies from throughout the series, and defeating them to earn experience and Faz Tokens to purchase upgrades.

As the game progresses, players collect more characters to join their party, with a total of 40 characters from the first four FNAF games making an appearance.

The reason FNaF World ended up getting removed was due to an outcry of negative reception stemming from the game’s numerous bugs and unfinished gameplay at launch. 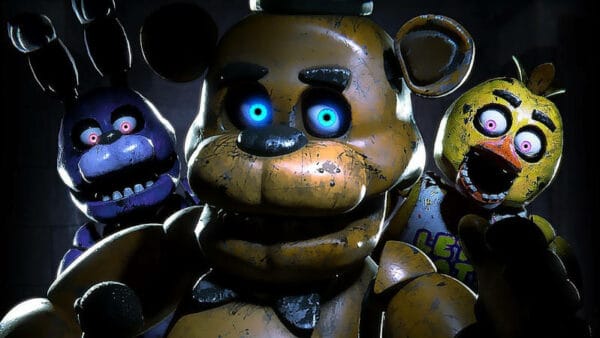 Special Delivery is the second spin-off game in the series and was released as an AR mobile game developed/published by Illumix in November 2019.

The game presents itself as an in-universe animatronic rental service created by Fazbear Entertainment and continues the storyline from FNAF: Help Wanted.

Gameplay employs a first-person POV with players wielding a flashlight and shocker device as a means of defense against malfunctioning animatronics that invade their home. 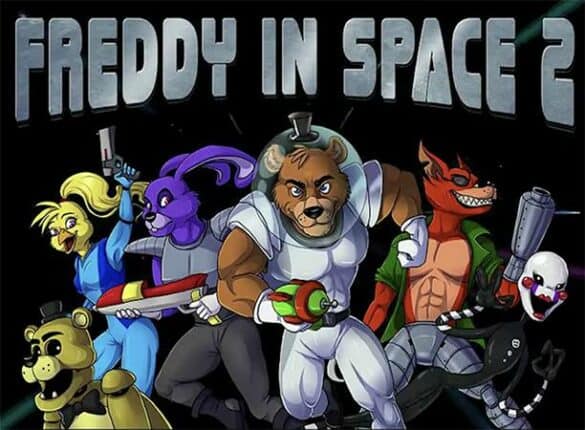 Created to bring awareness to the St. Jude Children’s Research Hospital fundraiser, Freddy in Space 2 is a side-scrolling shoot ‘em up made by Scott Cawthon and released on GameJolt.

The game positions itself as a sequel to the FNaF 57: Freddy in Space minigame from FNaF World and sees Freddy on a deep-space mission to rescue his friends and son from the evil computer assistant L.O.L.Z.H.A.X.

Having brainwashed space warriors Bonnie, Chica, and Foxy along with another mysterious puppet, Lolzhax also locks Freddy’s son outside the lunar station with limited air remaining.

To be successful, Freddy must defeat his comrades before his son runs out of oxygen, with each kill causing the chosen character to level up, obtain more health, stamina, and powerful weapons. 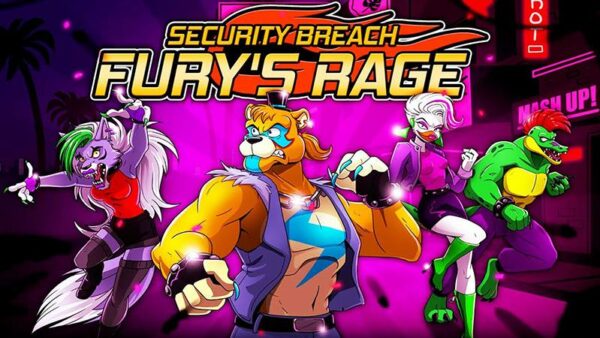 Fury’s Rage was released for free on GameJolt in order to appease fans after Scott Cawthon realized he would have to delay FNAF: Security Breach.

In it, players take on the role of either Glamrock Freddy, Glamrock Chica, Montgomery, or Roxanne for a side-scrolling beat ‘em up adventure.

The game features two difficulty options and five stages littered with enemies and power-ups before culminating in a boss fight at the end of each level.

While a spin-off, Fury’s Rage is unique in that it’s the first fighting game in the franchise, one of three non-Horror-related entries, and the second FNAF game to not include Freddy’s name in the official title.