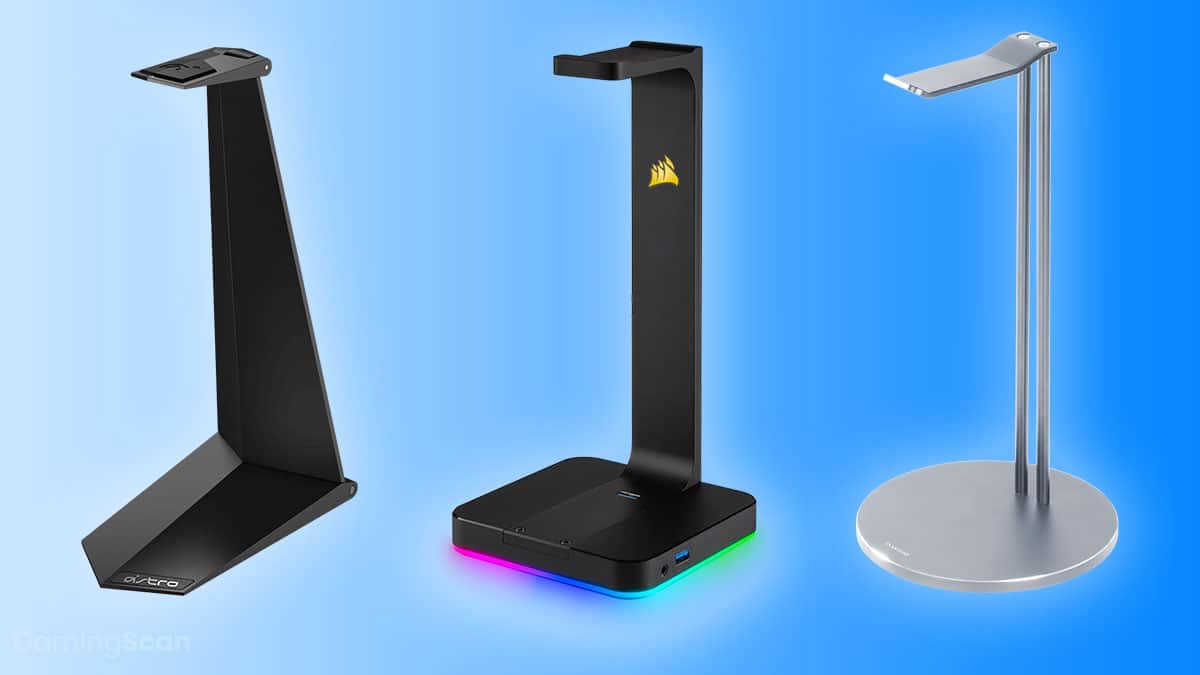 A headset stand is a type of product that can be either a plain accessory meant to hold your headset or it can double as a USB hub, serving as a convenient means of charging not only your wireless headset – if you own one – but other peripherals as well.

In this buying guide, we will be looking at a diverse selection of headset stands, and headphone stands that fall into either of those categories, narrowing down the selection and helping you pick out whichever one is right for you!

A headphone stand is an excellent idea as a gift for a gamer.

So, without further ado, here are the best headphone stands for 2023. 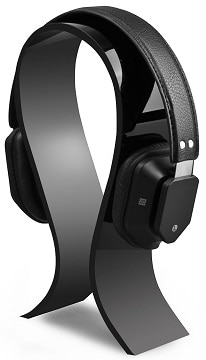 The first on our list is a simple no-frills headphone stand with a stylish, minimal design. The stand itself is quite stable and is a good fit for most headsets, providing a convenient means of storing your own without taking up too much desk space or grabbing too much attention.

On top of that, the stand comes in two variants: the standard black one with an opaque, glossy surface, or a translucent one, which is a much better fit for headphones and headsets that are predominantly white.

One issue that’s not spotted immediately is the fact that the stand is very light. This can make it a bit unstable, especially when placing a headset on or taking it off with only one hand. Other than that, there are no significant issues with the stand, although the black variant turns out to be quite a dust magnet, as is always the case with glossy surfaces. 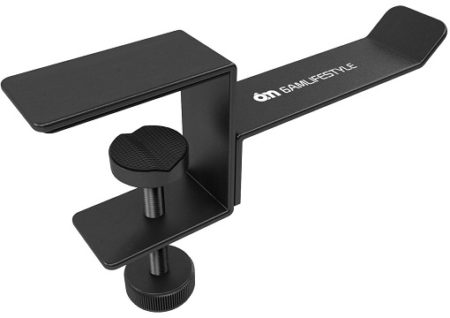 Next up is a somewhat different solution coming from 6amLifestyle. This headset stand is made of metal and is mounted on the side of your desk with the help of a clamp, something that can be useful for those who are running short on desk space.

When attached, the clamp is remarkably stable, and much like the AmoVee stand, it comes in two variants to suit different tastes: black and white. Furthermore, the silicon cushioning allows the clamp to be tightened firmly with no risk of damaging the desk material.

The stand itself is quite robust for everyday use, although it doesn’t seem particularly stable when mounted on a curved surface, despite being advertised as such. Nonetheless, the majority of people will be mounting the stand on the side of their desks, so this isn’t that big of an issue. 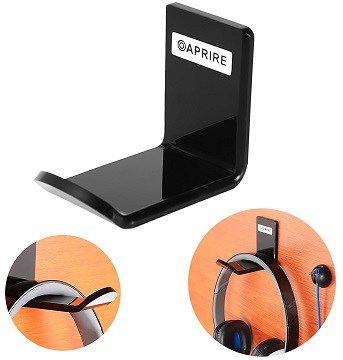 Coming up next, we have yet another mountable headset stand. Only, this one is made by Oaprire. Much like the AmoVee stand, this one comes with a glossy acrylic exterior, and it takes the minimalistic approach even further.

The stand can be mounted on a wall with virtually no hassle. There is no drilling involved, something that the manufacturer makes abundantly clear from the get-go.

Instead, it relies entirely on adhesive tape on the back. What’s more, the package includes two stands, as well as two simple rubber clips intended to hold cables.

So, all in all, the Oaprire headset stand is an excellent alternative to the 6amLifestyle one for those who would prefer a wall-mounted headset stand of a desk-mounted one.

The adhesive is surprisingly strong, and no headphones or headset will be too heavy for it. The only suspicion we have with it is the same old propensity of glossy surfaces to attract dust and fingerprints. 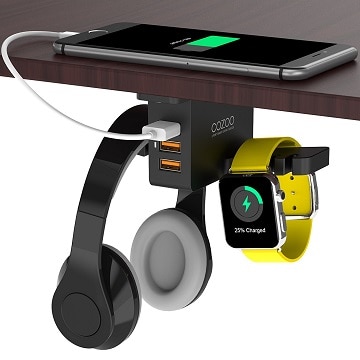 With this Cozoo headset stand, we get to the more advanced, pricier solutions. Like the previous two, this mountable stand is installed on the underside of your desk with the help of either adhesive tape or a set of screws.

However, the manufacturer suggests using the screws if you’re planning on storing accessories that weigh more than 500g – around 1.10 lb – in total.

Now, Cozoo’s stand can hold two headsets simultaneously, while the indentations can be used either for cable management or for storing earbuds. Furthermore, some of the more noticeable features are the three USB ports that can be used for charging any peripherals or accessories. Instead, the stand is powered via a non-detachable power cable.

With all that said, this Cozoo product is an excellent mix of a versatile headphone/headset/earbud storing device and a reliable USB charging hub for all your peripherals.

There are no significant shortcomings to speak of, although it is a bit jarring that the power cable is attached to the underside rather than the side of the product. 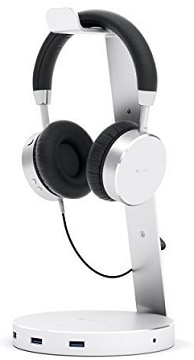 With this Satechi headset stand, we come back to simple desktop solutions. This particular headset stand is made of aluminum and comes in a variety of colors: silver, space grey, gold, and rose gold. But don’t be fooled by the flashy build – this stand is not just about the looks.

Namely, it also incorporates three USB 3.0 ports that support data transfer. What this means is that it doubles as a USB hub, and it also includes a 3.5mm jack, allowing you to plug your headphones directly into the stand.

Furthermore, on the back of the stand, you’ll find a hook that can be quite convenient for cable management.

This Satechi headset stand is a quality product inside and out, and it should be among your top picks if you’re looking for a stand that doubles as a USB hub.

However, as stated by the manufacturer, the ports are not meant for charging but only for data transfer, which is quite disappointing.

The only other issue that we have with it is the screws on the front that really should have been covered up and hidden somehow. 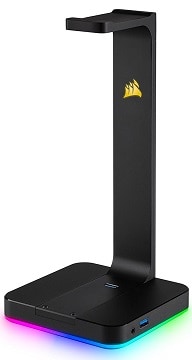 And now, we have a headset stand from Corsair, a company that surely needs no introduction. This one, too, is made of aluminum, although it opts exclusively for a darker exterior to better bring out the RGB lighting at the base and the logo on the front.

Feature-wise, the Corsair ST100 seems a bit lacking as far as USB connectivity is concerned, seeing as it only comes with two available USB 3.1 ports.

However, this is understandable considering that it is a newer version of the USB port that supports both faster charging and faster data transfer speeds.

As a plus, there is also a 3.5mm analog audio jack, which allows you to plug your headset directly into the stand with no loss in audio quality whatsoever.

There is no denying that the ST100 is one truly superbly-built premium quality headphone stand that comes with a plethora of features that justify its high price tag. However, it remains highly subjective whether the RGB is worth the extra expense. 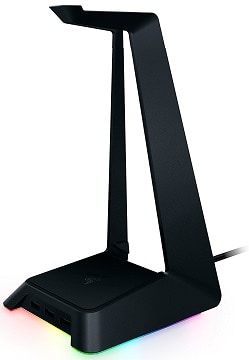 Coming in at the same price tag, we have Razer’s own RGB headset stand. It shifts some priorities around, though, as it is not made of aluminum but high-quality plastic instead. In turn, it adds an extra USB 3.0 port, amounting to a total of three usable ports.

Other than that, Razer’s Base Station Chroma is relatively similar to Corsair’s ST100, given that it also utilizes RGB lighting at the base, although it lacks the headphone jack.

One unique feature is the ability to detach the stand itself, which leaves the user with a helpful portable USB hub.

Furthermore, a cheaper non-RGB version is available at a slightly lower price. This would be a plus if it weren’t just a piece of plastic that was not only scrapping the RGB lighting but the USB ports as well.

In the end, the only bad thing we have to hold against the RGB version of the Base Station is the underwhelming build quality, although it is still robust. However, with other cheaper stands successfully incorporating aluminum into their design, one can’t help but feel that Razer is holding out on us with the build quality.

Conclusion – The Best Headphone Stand For 2023

Considering all the things we mentioned above, our top pick would have to be the Corsair ST100.

Headset stands are quite varied, both in terms of the features that they offer and when it comes to the prices, making it quite challenging to pinpoint a winner. Each product provides a different set of features at a different price tag.

With that said, we often tend to pick the product that offers the best value, but understandably, that is not easy to do in this case.

As such, we have opted to go with the stand that seems to present the best overall quality, and that would be the ST100 Corsair model mentioned above.

The stand is very sturdy and stable, coming with solid RGB lighting, and the two USB 3.1 ports will probably be more than enough for most users.

Moreover, the build quality itself is the main reason why we picked Corsair’s solution over the one presented by Razer, despite Razer’s Base Station having noticeably better RGB lighting and one extra RGB port.

But of course, that’s only our choice. Maybe you don’t need a premium headset stand with RGB lighting, and maybe you don’t even need a USB hub.

Whatever the case, you will not go wrong with any of the headset stands included in this list, as long as you keep in mind their capabilities and specifications, and your needs and preferences. 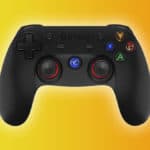