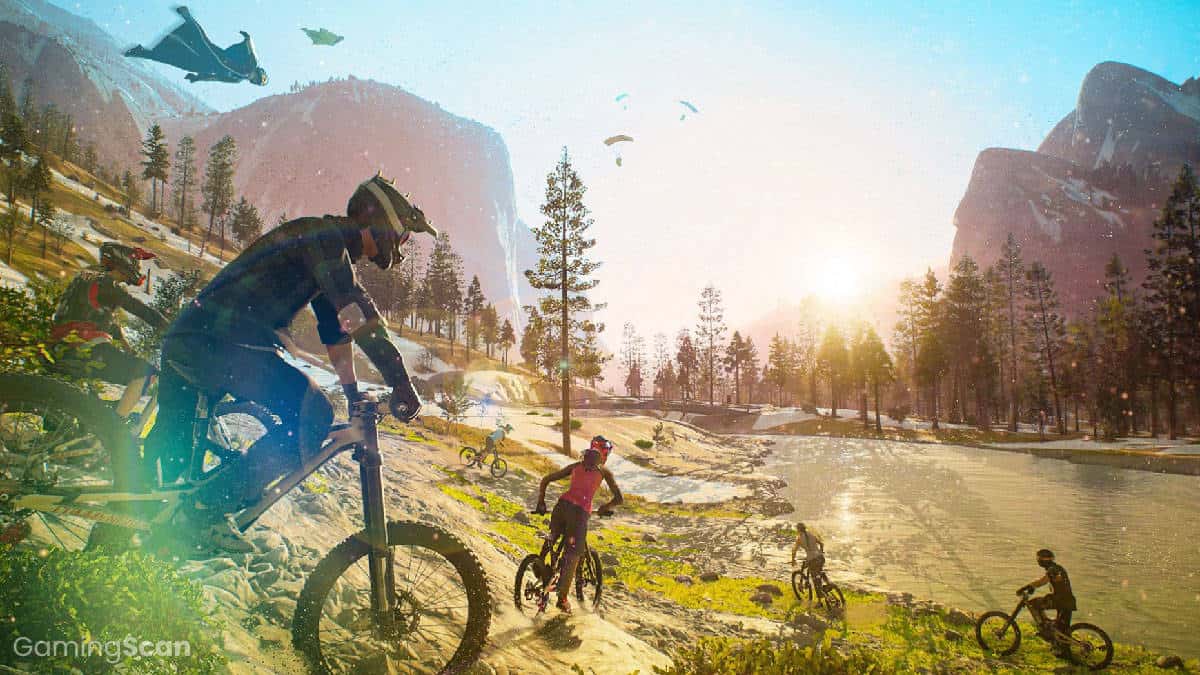 These days, it’s not uncommon to see ambitiously large open-world games with shockingly accurate depictions of real-world cities or even sprawling fictional continents.

So whether you’re a fan of sci-fi, fantasy, or more contemporary settings, there’s a new open-world game out there just waiting to be explored.

We’ll be updating this list in the future with new titles, so make sure to check back and let us know if we missed any of your favorite open-world games!

Halo Infinite is the first open-world game in the series, and as a result, went through the longest development cycle of any Halo game.

This can be attributed to the ambitious nature of the game’s campaign and open environments along with a new grappling hook traversal system that makes getting around the world a ton of fun.

The story sees players reprising their role as Master Chief as he continues his fight against the Banished on the Forerunner ringworld Zeta Halo, aka Installation 07.

While some fans were concerned Infinite wouldn’t live up to the franchise’s legacy, the final game ended up well-received and considered a return to form for the series.

Next up is Forza Horizon 5, another Microsoft first-party title that builds upon the success of its predecessors, namely the arcade-inspired Forza Horizon subseries.

Throughout the game’s open-world players can encounter a wide selection of activities beyond just racing, including tucked-away secret rewards and the occasional scenic view.

Another open-world racing game worth checking out is Riders Republic, which serves as a successor to Ubisoft’s snowboarding game Steep.

In it, players are set free on an enormous open-world map comprised of famous US national parks that offer distinct terrain to tear up.

Like Forza Horizon, the game features a wide variety of environment types that introduce unique hazards and challenges depending on your equipment.

Players can navigate the world with other people by skiing, cycling, wingsuit flying, and snowboarding throughout races, trick challenges, and free-roaming exploration.

Motor Town: Behind The Wheel

The third and final driving open-world game we’re recommending to players is Motor Town: Behind the Wheel, an indie driving sim from developer/publisher P3 Games.

In it, you go around a huge open-world completing different jobs that put you in the driver’s seat of a wide selection of cars, trucks, buses, etc.

Assignments can range from cargo deliveries to transporting passengers and more, with each one netting you new cars, parts, and other rewards.

Like many great open-world driving games, Motor Town features a day/night cycle, realistic physics, and a ton of other small mechanical details that help elevate its gameplay.

Switching gears, if you enjoy more survival-based open-world games then you’re bound to like Subnautica: Below Zero, a follow-up to the hit first-person game from Unknown Worlds.

The story sees you returning to the alien planet from the first game, only this time your character discovers a new icy region on its surface and sets out to uncover all of its mysteries.

To stay alive, you’ll have to gather resources throughout the world and use them to craft bases, submersibles, weapons, and more as well as keep your character’s belly full.

Much like its predecessor, Below Zero keeps things open-ended, allowing you to set your own goals as you explore the deepest corners of the ocean, construct bases, or advance the story.

As much as we love sequels to great open-world games, it’s always nice to see a promising new IP like Len’s Island pop up on the Steam store page.

In this open-world survival game, you’re tasked with carving out a new life on a beautiful island teeming with wonder and mystery.

As you explore the island’s many caves and forests, you’ll come across useful materials that can be crafted into tools and weapons as well as used to build bases.

Thankfully, the game features a modular building system that streamlines the entire process and makes constructing a home or farm both easy and fun.

When you’re not tending to crops or adding expansions to your humble abode, you’ll set out to meet different characters and battle any enemies that cross your path.

Fans of open-world games are likely to have played through at least one Far Cry game in their lifetime, including the most recent Far Cry 6.

Watch Dogs is another Ubisoft open-world franchise that recently saw an update in the form of Watch Dogs: Legion, released in October 2020 for PC and console.

Building off of its predecessors, the game sees you exploring a new contemporary setting in the form of modern-day London as you get to know its tech-obsessed citizens closely.

The story has you organizing teams of hackers, mercenaries, fixers, and criminals with diverse backgrounds and unique skillsets that can aid you in battling a corrupt private military group.

Players are given a good variety of tools and approaches that allow them to complete challenges however they see fit, including stealthy, nonlethal, and guns blazing.

Set in 9th century Britain, the story centers on a brewing war between the Templars and Brotherhood that causes your character to seek out a safe haven for their people.

Throughout the game, you’ll go around completing missions and favors for characters while exploring sprawling environments and building settlements for your people.

Other than Ubisoft, many consider Rockstar to be the best at making open-world games, with Red Dead Redemption 2 among the studio’s best efforts to date.

Set during the tail end of the Old Wild West, the game features a massive open-world brimming with lush vistas, intriguing mysteries, and tons of fun side activities to mess around with.

This is all complemented by one of the most well-crafted video game narratives centered on an aging cowboy forced to confront his own mortality as he navigates a criminal enterprise.

When you’re not in knee-deep trouble with the law, you’re free to carve out your own adventures and go horseback riding, hunting for exotic animals, drinking, and more.

Of course, Rockstar’s claim to fame is their satirical take on contemporary American pop culture with the Grand Theft Auto series.

The most recent and arguably best game in the series is Grand Theft Auto V, which introduces three new protagonists in its single-player story and the ability to create your own in GTA Online.

In it, you play as three work-for-hire criminals as they get down and dirty working for various mob bosses and street gangs in exchange for money, weapons, cars, etc.

Similar to other games on this list, players have the freedom to go off and explore the world for themselves, often encountering random, unscripted events that lead to cool discoveries.

Metro Exodus is the latest and greatest installment in the novel-based post-apocalyptic FPS and shares many of the same open-world qualities as games previously mentioned.

In it, you take on the role of a Russian scavenger named Artyom as he and his family set off in search of a new home beyond the frozen wasteland.

As you travel around post-apocalyptic Russia, you’ll be subjected to brutal weather conditions, ammo scarcity, lethal radiation, and a host of mutated creatures threatening your survival at every turn.

While a large part of the journey is spent on a steam-powered train called the Aurora, there are plenty of opportunities to explore Metro Exodus’ world firsthand.

No longer limited to PlayStation consoles, Horizon Zero Dawn is a fantastic action RPG with a strikingly vibrant post-apocalyptic open-world inhabited by humans and sentient machines.

You play as a hunter named Aloy as she sets out to defend her tribe from the machines in hopes of gaining their acceptance and ensuring their survival.

Despite the game’s primitive setting, players can unlock gadgets and upgrades over time that let them harness the machines’ power and devise new strategies.

If we’re talking large-scale open worlds, it doesn’t get much bigger than No Man’s Sky, which has come a long way since its controversial launch thanks to ongoing efforts from developer Hello Games.

In this space-faring survival adventure, you’re tasked with traveling to different planets with unique ecosystems in order to harvest their resources and eventually reach the center of the galaxy.

The main focuses of the game are exploration, crafting, and base-building, with players able to construct both ground and aerial vehicles for easier navigation.

NMS also supports online co-op with an open-ended quest structure that lets you and your friends focus on the types of activities you enjoy most.

The Witcher 3: Wild Hunt is another notable open-world game that needs no introduction seeing as its won countless awards and is generally considered one of the best contemporary fantasy RPGs.

In it, you play as a “Witcher” monster hunter named Geralt as he sets out to find his adopted daughter and save her from an evil cult known as the Wild Hunt.

Along the way, you’ll get to explore various storylines tied to different characters in the form of quests, boss fights, and open-ended exploration.

Between major plot points, players are free to explore the Witcher 3’s vast open-world and hunt wildlife, gather ingredients, and soak up some scenery.

The Saints Row series has built up a reputation for taking the GTA formula and turning it on its head with ridiculous, over-the-top gameplay and story writing.

In Saints Row 4, you play as an original character elected President of the United States as they attempt to thwart an alien invasion.

This is no big deal thanks to a host of bizarre superpowers that prove useful for beating up bad guys and getting around the world quickly and easily.

It’s a great game for anyone who’s grown tired of the same old open-world tropes and wants something completely different, borderline weird.

In Fallout 4, players are cast as the Sole Survivor, a vault dweller who awakes from cryogenic stasis after witnessing their son’s kidnapping and spouse’s murder.

Upon emerging from Vault 111, players set off across the Commonwealth Wasteland looking for clues about their lost child while encountering unique NPCs and obstacles along the way.

The game introduces several refinements over its predecessors, including expanded dialog, new crafting, base-building, and layered armor systems, along with mod support.

Last but not least, The Elder Scrolls V: Skyrim is the fifth and most recent entry in Bethesda’s beloved action RPG series and considered one of the best open-world games of all time.

The story is set 200 years after Oblivion and sees you fulfilling your duty as the Dragonborn, a powerful warrior destined to defeat a terrifying dragon believed to bring about the end times.

Boasting a flexible combat system with room for both stealthy and aggressive playstyles, the game is further complemented by a robust skill tree that allows for unique ability and gear combinations.

Lastly, while Skyrim’s map may not be the biggest, it still offers a lot of secrets to find, recruitable companions, and hidden areas that reward you for exploring off the beaten path. 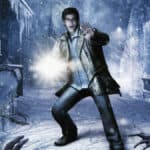