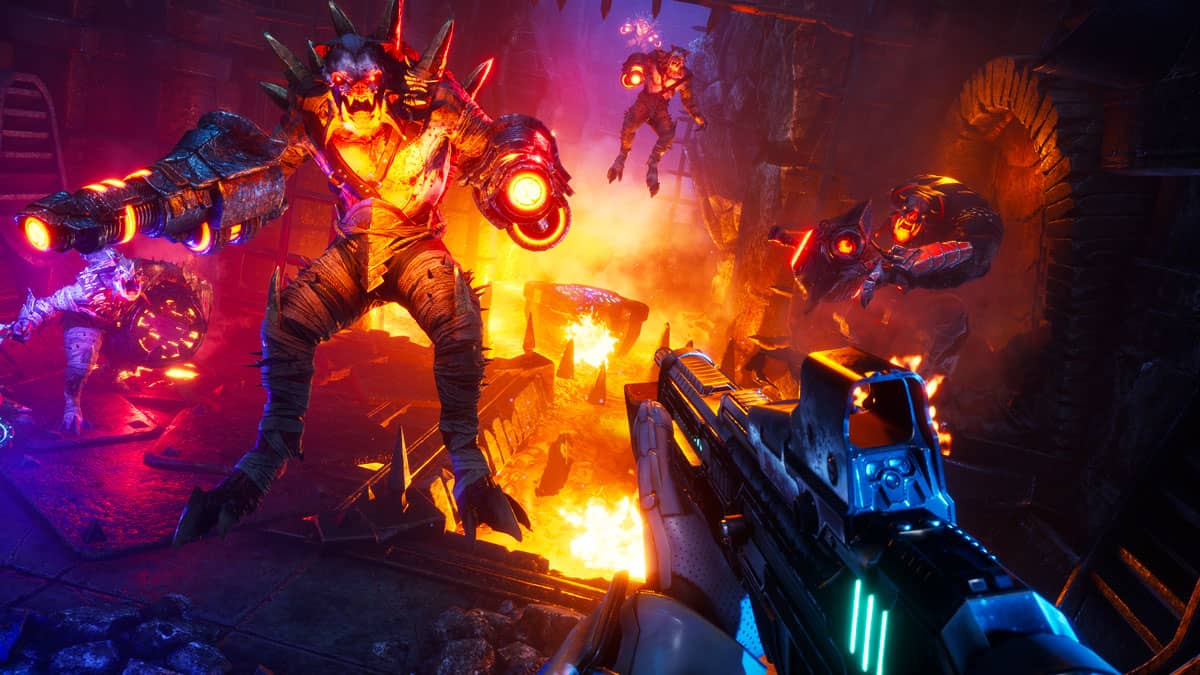 Whether you consider yourself a fan of modern or retro-style FPS games, there’s never been a better time to play first-person shooters.

Aside from being one of the most popular video game genres, shooters are great for honing your hand-eye coordination against other players online.

In this list, we’ll highlight the best first-person shooters to play in 2022, including the best FPS games on Steam, PlayStation, Xbox, and Nintendo Switch.

We’ll be updating this list in the future with new titles, so make sure to check back and let us know if we missed any of your favorite first-person shooters!

In it, players speed their way through bloody gunfights across a series of increasingly intense trials to rank on the global leaderboards.

Warstride Challenges will give you the ability to challenge anyone online and race them async in the game’s Nemesis Mode.

Next up is Nightmare Reaper, a dark and violent mixture of retro and modern FPS gameplay inspired by 90s classics and contemporary looter shooters/rogue-lites.

In it, players explore the cursed depths of a nightmare while expanding their arsenal with powerful weapons and upgrading their abilities.

Each level is open-ended and offers an abundance of enemies to use for target practice along with plenty of secret areas and surprises.

As you progress, you’ll accumulate gold that can be used to purchase new character upgrades and abilities in conjunction with 80 unique weapons that can drop as loot.

Outside of Red Dead, there aren’t many cowboy-themed shooters these days, especially ones with a first-person POV.

Thankfully, the market just got bigger thanks to Blood West, an immersive FPS game with a wild west setting that casts you as a revenant desperado.

Armed with a knife, axe, sawed-off shotgun, and revolver, you must search for a way to undo the curse put on you while battling twisted demons and eldritch horrors.

Anyone who’s played a Serious Sam game before will know exactly what they’re getting into; anyone else: buckle up, its going to be a weird ride.

Serious Sam 4 sees developer Croteam back with a new over-the-top shooter in which Earth’s last defense is a man armed with an infinite number of one-liners.

Joined by a squad of misfit commandos, Sam “Serious” Stone sets out to squash an alien invasion using a revamped arsenal of weapons and abilities.

From hard-hitting shotguns and miniguns to powerful chainsaw launchers and more upgradeable toys, this is a great FPS for sweet ultra-violent carnage.

Ready or Not is a tactical first-person shooter designed around realistic combat situations such as active shooters, bomb threats, and hostage negotiations.

Together, you and a team of up to four other players assume control over elite Swat officers as they fight to protect civilians and eliminate threats using either lethal or non-lethal measures.

The rules of engagement vary from mode to mode and the game awards bonus points based on your team’s ability to defuse situations using non-lethal force.

Ready or Not is currently limited to online co-op against AI bots but the developer plans to add competitive PvP in a future update.

If you’re a more adventurous FPS player that gravitates towards weirder, more experimental titles, Golden Light may be right up your alley.

It’s presented as a dark comedy survival horror FPS with prop hunt gameplay and roguelike elements such as procedurally generated levels and spawns.

Each run sees you exploring spooky lo-fi 3D environments brimming with an eerie atmosphere and weird imagery such as meat monsters, floating heads, and the like.

Enemies are typically disguised as props you encounter and can be dealt with using various guns; Golden Light also features online co-op and versus modes.

Turbo Overkill is an upcoming shooter that draws influence from retro FPS games like DOOM, Duke Nukem, and Quake.

Johnny is equipped with augmented body parts including hidden arm rockets and a chainsaw in his lower leg that come in hand during combat.

The game is set to include 24 levels packed with secrets, bonus areas, and combat puzzles with additional content planned for post-launch.

Other than voicing complaints about Halo Infinite’s ranking system and battle pass progression, players have been quite receptive to Xbox’s new FPS title.

Much like its predecessors, Infinite manages to stand out from other arena shooters by doubling down on weapon spawns, map size, and time-to-kill duration.

In the meantime, players can explore a growing list of PvP playlists where they can complete daily/weekly quests to earn XP and level up the battle pass to unlock rewards.

Squad is a tactical shooter that stands out for its large-scale firefights that emphasize realistic combat, communication, planning, and teamwork.

This results in tense battles that require split-second decision-making as up to 50 players race to secure emplacements like HMGs and AT guns and fortify their position with sandbags, HESCOs, and razor wire.

Squad currently features 20+ sprawling maps that can be traversed using vehicles and modified with player-constructed bases.

Our next recommendation is the tactical team-based FPS Valorant, which comes from Riot Games and draws inspiration from games like CS: GO, Overwatch, and Rainbow Six Siege.

In it, players compete in 5v5 teams where one side is assigned the role of Attacker and the other Defender.

To win, both teams must try to carry out their objective while preventing the enemy from doing the same, usually by eliminating them to end the round.

Like many of today’s online multiplayer games, Valorant features an extensive roster of playable characters called ‘Agents’ that introduce unique abilities and strategies to add to your arsenal.

Bright Memory: Infinite is a lightning-fast single-player FPS about a special operative named Shelia who can pull off dazzling combos using various weapons and skills.

Caught in a war between modern and ancient technologies, Shelia will have to use her combat training to survive long enough to uncover the truth behind a mystery.

Players guide her through stunning environments as she fights tirelessly to prevent a secret military group from bringing back ancient creatures to use as weapons.

Gameplay is reminiscent of action-heavy arena shooters like Doom and Shadow Warrior, with an emphasis on swords, guns, and special powers.

In contrast to previous games in the series, Metro Exodus broadens its scope with bigger open-world environments for players to explore and engage with.

No stranger to best FPS lists, Apex Legends is what you get when Titanfall multiplayer gets mashed together with hero shooters and battle royales.

Each game sees up to 60 players unleashed on a sprawling map filled with randomized weapons and equipment that can be the difference between a win or a loss.

Serving as a follow-up to The New Order, Wolfenstein II: The New Colossus is set in an alternate version of 1961 where the Nazis won WWII.

In it, you play as series’ protagonist BJ Blazkowicz as him and a ragtag team work together to bring down the Nazi regime in America.

Like many shooters, the game gives you the ability to dual-wield seemingly every combination of weapons as well as vault over objects to use for cover.

Most impressive is New Colossus’ depiction of a dark and twisted America, complete with propaganda posters plastered on city walls.

Often cited as one of the most influential open-world shooter franchises, the Far Cry games are known for their first-person combat, unbridled exploration, and gorgeous backdrops.

Far Cry 6 delivers on all three fronts while upping the mayhem and telling a new, politically-charged story about a group of rebels fighting against a corrupt dictatorship.

Set in the lush tropical island of Yara, the game sees you infiltrating enemy bases, gathering resources, and meeting new characters who can either hinder or help your progress.

Additionally, Far Cry 6 throws unique and interesting vehicles into the mix, including a wide array of cars, boats, helicopters, and more.

First hitting the scene in 2015, Rainbow Six Siege has had to fight an uphill battle to get to the level of polish and recognition it has today.

While Ubisoft is not particularly known for investing heavy resources into multiplayer-focused games, Siege is a great example of what’s possible when a developer weathers the storm.

Now more than seven years after its original release, the game has managed to grow its playerbase and maintain consistent numbers between major updates.

Overwatch took the world by storm when it was released in 2016 and hasn’t let go ever since, amassing a passionate esports community while still appealing to less competitive gamers.

This is in large part due to its satisfying blend of MOBA and FPS gameplay with distinct roles and heroes that significantly alter how you play.

In addition, Blizzard has made some notable gameplay refinements throughout the years and continues to rework certain characters in anticipation of an upcoming sequel, Overwatch 2.

Even if player count isn’t quite as high these days, you shouldn’t have any problem finding enough people to hop on and play a few rounds.

DOOM has a reputation for keeping players engaged by including a wide selection of unique weapons to toy around with and master.

Easily the most slept-on immersive sim FPS to come out of Arkane Studios, Prey sees you taking on the role of a science researcher aboard a space station overrun with hostile aliens.

Throughout its branching story, you’ll encounter various species of Typhon, ranging from shape-shifting Mimics to warping Phantoms and more.

Learning how to deal with each one is crucial for unlocking new areas, saving other survivors, and making it out of the Talos I station alive.

Admittingly long in the tooth, Destiny 2 has had its fair share of ups and downs throughout its many seasons, with the recent Witch Queen among one of the better expansions.