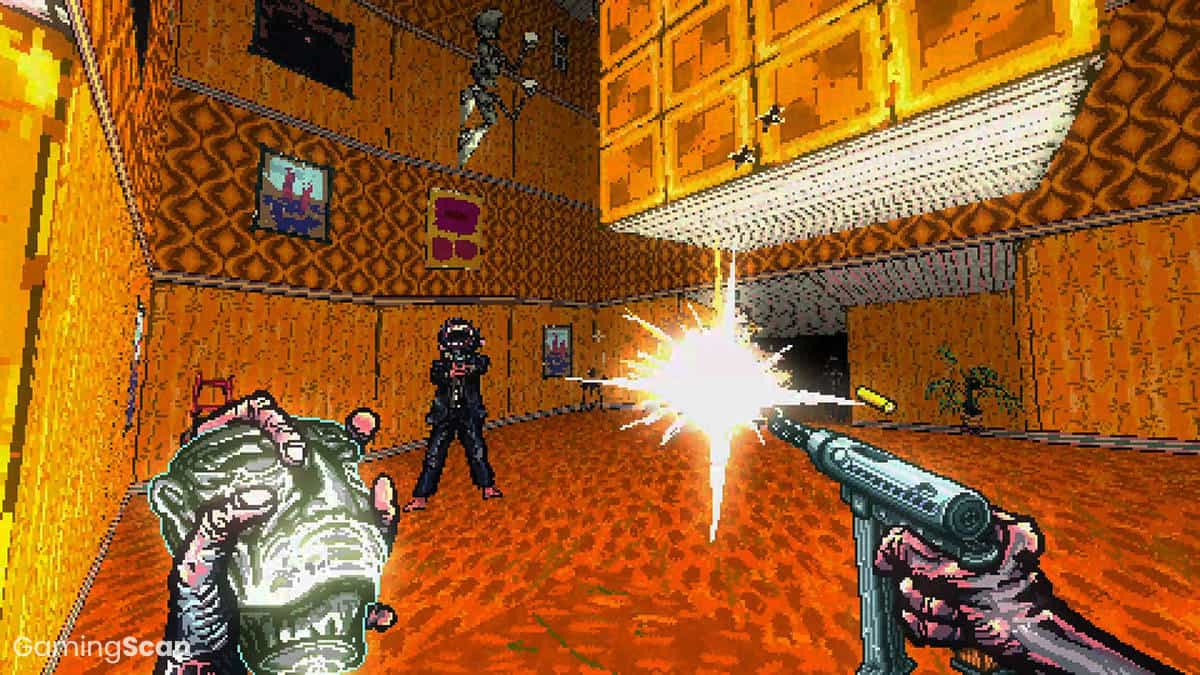 Retro-style first-person shooters have been making a comeback in recent years as game designers look to the past for inspiration in classic games like Doom, Quake, and Duke Nukem.

Often referred to as “boomer shooters,” these retro-inspired games do a great job of capturing the nostalgic gameplay and visual style of their predecessors while offering a few modern amenities.

One of the best titles released during the current retro shooter revival is Forgive Me Father, a dark retro horror FPS with a comic book aesthetic that’s equal parts Doom and H.P. Lovecraft.

In it, players take on the role of either a priest or journalist as they navigate a world consumed by madness and eldritch horrors.

Combat blends 90s FPS gunplay with active skills and power-ups that can help out in a pinch while battling hordes of unpredictable enemies.

The game also features a sanity mechanic and unique dedicated skill trees for both playable characters, with more content coming in future updates.

Next up we have Ultrakill, another fast-paced FPS inspired by classics like Doom and Quake, complete with early polygonal 3D graphics.

Despite its old-school look, the game has a lot going on under the hood to make its gameplay feel satisfying and rewarding enough to keep players hooked.

This includes skill-based style scoring and a health-regeneration system that encourages you to rip through enemies and bathe in their blood.

It also happens to be dripping with style and ultraviolent combat courtesy of Arsi Patala and New Blood Interactive, proving the potential of combining retro and modern game design into a single package.

In it, players are forced to battle a host of otherworldly enemies ranging from possessed militants to evil cultists and everything in-between as they run and gun through grimdark levels at breakneck speeds.

The game includes a vast arsenal of hard-hitting weapons inspired by 90s shooters such as double-barreled shotguns, crossbows, and rocket launchers as well as melee weapons like sickles and swords.

After beating the main campaign, players can dive into Dusk’s Endless Survival Mode or take the fight online in DUSKWorld arena multiplayer.

Taking cues from Doom and Quake in regards to its visual and gameplay design, Prodeus sees players carving out a path of blood and carnage as they make their way towards the end of each level.

This is achieved using a wide selection of weapons ranging from pistols and shotguns to more powerful options like a rocket launcher and lightning gun.

Each one does a fine job of turning bad guys into mincemeat, something Prodeus is quite proud to show off by coasting the walls and ceilings with enemies’ blood and guts.

Aside from the minute-to-minute action, the game also features plenty of opportunities to explore and discover hidden secrets reminiscent of the original Doom games.

Players are given dozens of weapons to unleash their fury on enemies, including various knives, katanas, pistols, shotguns, machine guns, and bazookas.

The game also features a robust movement system that allows you to jump, slide, dive, kick, and punch your way to victory throughout urban warehouses, rooftops, and back alleys.

Lastly, the ability to slow down or speed up time expands the number of combat options at players’ disposal, allowing you to grab weapons midair and blow enemies to smithereens.

Yet another title from New Blood Interactive, Amid Evil is a retro FPS in the same vein as games like Unreal Tournament, Doom, Quake, and Heretic.

In it, you take on the role of The Champion, a skilled warrior chosen by the gods to wield a holy battle-ax and use it to defeat bad guys across multiple realms.

This ax can do a ton of cool things such as fire elemental projectiles, cast spells, and even deliver a nice blow to enemies’ heads.

Like many of the other games highlighted, Amid Evil relies on fast reflexes and near-constant movement to keep yourself alive amidst the barrage of enemy projectiles and on-screen chaos.

Ion Fury stands out as the first project in over a decade to be developed entirely using the Build engine, the proprietary software from the 1990s that was used to create classics like Duke Nukem 3D.

In it, players take on the role of Shelly “Bombshell” Harrison, a tough-talking future cop with a knack for bloodshed and sassy one-liners.

Shelly is tasked with bringing down a cybernetic cult and defeating its evil leader, a transhumanist mastermind by the name of Dr. Jadus Heskel.

It’s truly impressive to see how much developer Voidpoint was able to achieve by pushing the Build engine to its limits, resulting in one of the best modern retro games of all time.

Similar to how Ion Fury was built to run on the Build engine, Wrath: Aeon of Ruin was made on the classic Quake engine and shares some similarities with the iconic FPS franchise.

However, developer Killpixel still went out of their way to incorporate modern technologies when designing the game’s save system and level design.

Players are presented with a series of three hub worlds, each centered on their respective themes, as well as the option to save the game at any point, assuming you have enough Soul Tethers.

These function as a consumable resource that can be stockpiled for especially tricky sections of the game, in turn creating a new layer of strategy that adds to Wrath’s overall complexity.

The gameplay is centered on roguelike, run-based progression in which players take control of various prisoners as they chart a course for freedom across the galaxy.

Each playthrough sees you exploring a series of derelict spaceships in order to scavenge supplies to keep your run going and eliminate any enemies that try to stop you.

While most situations can be handled using brute force, Void Bastards expands the number of tools at your disposal by incorporating various traps and gadgets designed to distract or deter enemies.

Next is Project Warlock, a unique blend of classic and modern FPS action that draws inspiration from old school franchises like Doom, Hexen, and Wolfenstein.

In it, players are cast as a mysterious Warlock on a mission to eradicate evil throughout time and space using an assortment of weapons including guns and magic spells.

The game features 60 levels across five distinct settings that serve as a great showcase for Project Warlock’s vibrant color palette and sprite-based visuals.

Over time, players can develop their hero however they see fit by assigning upgrade points and perks to skills that mirror their preferred playstyle.

The original Ziggurat is a beloved PC shooter that harkens back to old-school FPS action while mixing in magic, roguelite progression, and fluid movement in one satisfying package.

With the sequel Ziggurat 2, the action shooter has been redesigned from the ground up with the goal of improving the formula across all areas.

This includes better procedurally generated dungeons with more verticality and variety as well as new weapons, enemies, and spells compared to the original.

Between missions, players can visit the Citadel HUB area to recruit allies, upgrade their equipment and skills, and plan out their next run.

Immortal Redneck is an arcade-style FPS with frantic gameplay modeled after classics like Doom and an absurd premise in which you play as a redneck tourist who wakes up in ancient Egypt.

To make it out alive, you’ll have to climb three dangerous pyramids protected by an army of mummified minions and bosses.

There are nine playable classes to pick from and over 50 different weapons to wield, including traditional firearms along with a host of mythical, magical, and straight-up weird guns.

An absolute must-buy for any shooter fan on a budget, Post Void is a tiny old-school-inspired FPS that can be picked up for around three bucks or even less during a Steam sale.

The game describes itself as a “hypnotic scramble of early first-person shooter design that values speed above all else,” and in our experience that definitely rings true.

The first time you pick it up, your eyes will need some time to adjust to the distorted bright colors, trippy environments, and fast-paced combat.

However, keep at it and soon you’ll find yourself flying from room to room killing anything that crosses your path and aiming to reach the end with a new high score.

Hellbound is a no-nonsense old-school-style FPS that focuses less on innovation and more on delivering satisfying arena-shooter combat.

The premise is simple: you’ve been transported to Hell and must fight a host of unspeakable evils using six different weapons.

Offering just seven levels and one boss fight, Hellbound is admittingly light on content but manages to scratch that boomer shooter itch by focusing on pure action, speed, gore, and hard-hitting metal music.

If the asking price of $14.99 is too high for you, developer Saibot Studios offers a standalone survival mode where you can run and gun to your heart’s content free of charge. 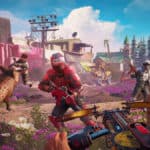