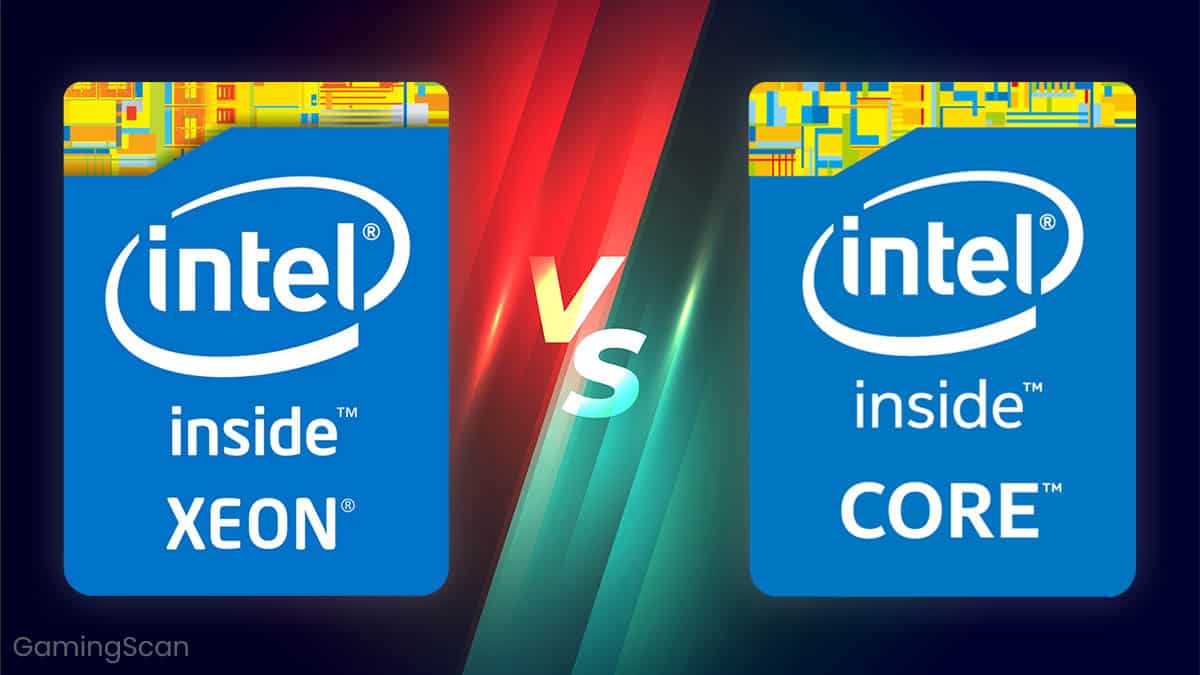 Intel Core CPUs (including the i3, i5, i7, and so far, a single i9 model) are mainstream desktop CPUs, whereas Intel Xeon CPUs are designed primarily for servers and workstations. As a result, there are a number of major differences between the two, including the core count, clock speeds, memory capacity, pricing, and more.

If you’ve started to take an interest in PC building, then you already know that the most popular CPUs that you’ll find in gaming configurations today belong to AMD’s Ryzen and Intel’s Core series of processors.

However, those aren’t the only CPU brands that you can come across today, and you’ve undoubtedly seen some Intel Xeon models online. All of the different brands are designed with different purposes in mind, but in this article, we’ll focus on the differences between the Xeon and the Core series specifically.

So, what are Intel Xeon CPUs, what are they built for, and how do they compare to the mainstream Core series? We’ll answer all of that below!

What Are Intel Core And Intel Xeon CPUs?

Since the late 2000s, Intel Core CPUs have been the company’s primary mainstream CPU brand, comprised of a number of i3, i5, i7, and, more recently, i9 models. Generally speaking, i3 CPUs were meant for budget builds, i5 CPUs for mid-range ones, and i7 models were the prime choice for high-end configurations. Recently, Intel has added i9 models to the mainstream lineup, too, to serve as high-end enthusiast solutions for those who need even more CPU power than what the i7 models can provide.

Meanwhile, the history of the Intel Xeon CPUs goes back to the late 90s, and the series encompasses many different models from across the years. However, these were never intended for desktop CPUs. Instead, Xeon processors were designed with servers and workstations in mind.

Multi-core CPUs have been around for over a decade at this point, and having multiple cores on a single die means better multitasking capabilities, but it also means that developers can design their software with multiple CPU cores in mind, thus allowing the CPU to process more data in a shorter amount of time.

Now, as you can imagine, desktop CPUs don’t need nearly as much processing power as servers or workstations do, so Xeon CPUs come with significantly higher core counts. However, the exact number of cores inevitably varies based on the price and the intended purpose of the CPU model.

When it comes to Core CPUs, the core count obviously varied across generations, but the latest 9th generation desktop i3 CPUs come with 4 cores, i5 CPUs come with 6, i7 CPUs come with 8, and only the i9-9900K currently has hyperthreading, with 8 cores and 16 threads.

The upcoming 10th generation Comet Lake CPUs will mostly maintain the core counts mentioned above, but all the 10th gen models will also feature hyperthreading. The i9 models are the only ones that will have their core count bumped up to 10, which also means a total of 20 threads.

An area where Intel Core CPUs actually have an advantage over Xeon is their higher clock speeds and overclocking capacity. The higher the clock speed, the more data the CPU can process in the span of a single second, and all the Intel Core CPUs that come with a “K” at the end of the model number (e.g., i7-9700K) have excellent overclocking capacity, provided that they are equipped with proper cooling.

Meanwhile, most Xeon CPUs actually run at lower clock speeds, and for a couple of good reasons.

Firstly, Xeon CPUs have a higher TDP, which means that they generate more heat, and high clock speeds mean even more heat. As such, cooling can become problematic if the CPU is overclocked. Secondly, stability and power-efficiency are more important for server and workstation CPUs than raw processing power is, which is another reason why you see many expensive Xeon CPUs with seemingly low clock speeds.

Intel Xeon CPUs also generally have more cache memory than their Intel Core counterparts. The latest mainstream i7 and i9 models have 12 and 16 MB of cache memory, respectively, and while some of the cheaper Xeon models actually have less, most of them have more.

The cache allows the CPU to store small amounts of relevant data so that it can access it quickly, and as you can imagine, this can also enhance performance, mainly when it comes to stability and juggling multiple tasks.

Moreover, there’s ECC memory, and ECC stands for Error Checking and Correction. As we’ve previously mentioned, stability is crucial for servers and high-end workstations, and ECC RAM helps in this regard by eliminating one of the most common causes of software crashes – corrupted memory data.

Finally, we get to pricing, and that’s where another significant difference between the two CPU brands lies.

As for Xeon models, they cover a much more extensive price range. The cheapest ones start at around $230, but the currently most expensive Intel Xeon Platinum 8180 costs a whopping $15000, and no, that’s not a typo.

The reason for the price premium should be fairly obvious, as Xeon CPUs often boast more cores and feature advanced, expensive technologies that are hardly worth including in most PCs. Not only that, but the bulk of these CPUs is aimed mainly at companies who can afford to spend a ton more money on high-end hardware.

So, at the end of the day, as you can tell, the Xeon and Core CPUs are two entirely different CPU brands, comprised of many models designed for different purposes, so how they stack against one another depends entirely on what it is that you intend on using the CPU for.

Intel Xeon CPUs are, as we have mentioned in the article, designed to be used in servers and workstations. Some are in the same price range as some of the mainstream Intel Core models, but most of them are much more expensive.

For those who need the stability and advanced features offered by Xeon CPUs (usually companies) would find them to be a worthwhile investment. However, when it comes to gaming, the Core CPUs are a much better choice, as they can offer better single-core performance and they cost less than most Xeon models. As a result, they will have all the processing power that you need at a much lower price point.

Finally, if you’re shopping for a new CPU, we suggest that you check out our selection of the best CPUs for gaming that are currently available, as you can find some good picks there.

Ryzen vs Threadripper vs Epyc – Which is Best for Gaming?
Related Topics Tags