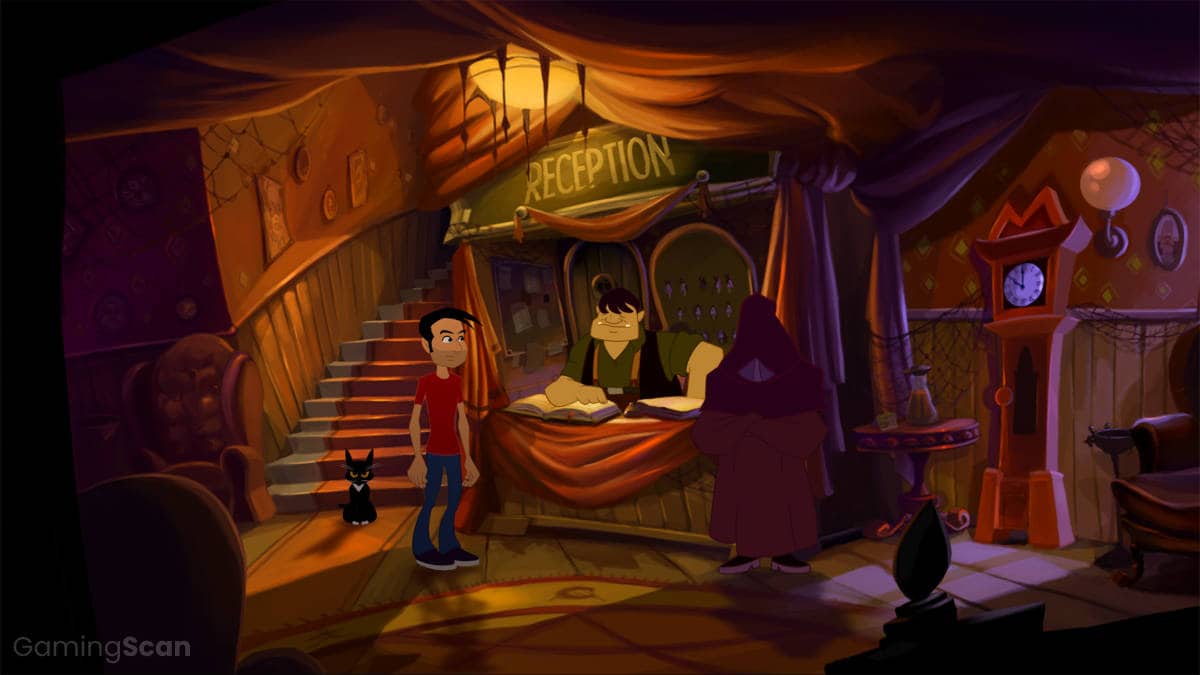 Point-and-click adventure games are among the few classic video game genres that have managed to stick around despite hitting their peak in the 1990s.

They offer an exciting blend of exploration, puzzle-solving, detective work, engaging dialogue, and secret gags that reward you for leaving no stone unturned.

The point and click genre is full of relaxing, low-stakes games that let you take things at your own pace, so get us started, we have a game that really leans into this idea.

Later Alligator is a mystery adventure title that sees you exploring an alternate version of New York City inhabited by bipedal, talking alligators.

The game is played from the perspective of Pat, a socially awkward reptile who becomes wrapped up in a criminal conspiracy involving his family.

Pat’s quest for answers leads them on a humorous adventure filled with 30+ mini-games and over 100 different alligators to meet.

Thimbleweed Park draws influence from classics like Maniac Mansion while tasking you with investigating a small-town murder as two FBI agents.

Things eventually expand as new persons of interest are revealed and become playable, allowing you to gain further insight into each character’s personality and ulterior motives.

If you’re a longtime point-and-click fan, then you’ll definitely recognize and appreciate a large number of references to other LucasArts titles.

There Is No Game: Wrong Dimension

There Is No Game is a parody title that pokes fun at different iconic video game franchises such as Pac-Man, The Legend of Zelda, and Day of the Tentacle (also worth checking out if you haven’t already).

It plays very much like a WarioWare title, complete with random mini-games, interactable environments, and clever riddles that require you to think outside the box.

There are also plenty of Easter eggs, nods to some of our favorite adventure franchises, and a hint system for when you get stuck.

If that all sounds great, but if you’re not convinced, check out the game’s Steam page for yourself to get a feel for its silly tone and visual presentation.

Prior to developing the hit multiplayer game Among Us, Innersloth Co-founder Puff created The Henry Stickmin Collection, a series of choose-your-own adventures originally released in the late 2000s to early 2010s.

The gags are hilarious, and the game does a great job of subverting your expectations of what could or should happen when you choose a certain path, resulting in laugh-out-loud moments throughout.

In it, you play as detective Francis McQueen, joined by his cop partner Dooley, as the two solve a series of bizarre cases caused by supernatural powers.

McQueen is a bold detective who speaks his mind, including complaining about how underfunded his department is, while Dooley is an easy-going policeman who’s not afraid to poke fun at himself.

If you’re a fan of detective shows and pop culture references, you’ll definitely enjoy the onslaught of nods to popular films and series.

Another strength of point-and-click adventure games is the innate sense of mystery and wonder present in their open-ended environments.

A game that leans into this aspect of the genre while telling its own intriguing, frequently unsettling story is Sally Face, which centers on a boy with a prosthetic face and a tragic past.

Composed of five episodic acts, the first one follows Sally Face and his father as they move into a new apartment building filled with odd neighbors and the site of a crime scene.

Gameplay is casual by design and includes simple mini-games, dialogue interactions, and puzzles, along with tons of hidden paths and secrets to uncover.

In the past, and honestly still to this day, point-and-click games tend to be a lot more experimental and weird in their stories, art style, and even gameplay mechanics.

One of the best recent examples of this is Strangeland, a surreal adventure game from the makers of Primordia that sees you exploring a nightmarish carnival filled with otherworldly attractions and characters.

You play as a mysterious man who awakes in this twisted amusement park to the sounds of a woman crying out before leaping to her death, prompting you to search for answers.

The game explores many heavy themes and contains dark imagery that may be overwhelming for some, but if you’re a sucker for old-school point-and-click games, you should definitely give it a try.

Fran Bow is another excellent recommendation for fans of point-and-click horror games and tells the story of a young girl struggling with a mental disorder and bad luck.

After coming home to discover her parents killed, Fran goes into shock and ends up in Oswald Asylum, a strict, borderline oppressive mental institution for children.

Fran starts having weird dreams about her beloved cat Mr. Midnight, that’s nowhere to be found, and sets out to escape the Asylum and seek out her only living relative, Aunt Grace.

Now that we’re knee-deep in weird adventure game territory, we might as well go all the way with our following recommendation, Critters for Sale.

Each story touches on themes rooted in sci-fi and the occult, such as time travel, black magic, and immortality, with you encountering an assortment of aliens, mythical monsters, and famous celebrities.

The entire thing plays out like a black and white acid trip where nothing is off-limits, including graphic depictions of violent acts that are a bit easier to stomach due to the game’s 1-bit pixelated art style.

Gibbous is a modern point-and-click game with traditional animation techniques and hand-drawn environments reminiscent of the genre’s golden age in the 1990s.

Set in a complex Lovecraftian-inspired world, the story centers on a Detective as he attempts to retrieve a mysterious evil tome with help from an eccentric librarian and his talking cat.

They encounter a host of cosmic horrors throughout their journey, including crazy cultists, alchemic rituals, and even a cameo from Cthulhu himself.

Despite being grounded in horror, the game has a comedic tone and plenty of moment-to-moment humor that contrasts nicely with its overarching sinister plot.

If you’re an adventure game aficionado, then chances are you’re already familiar with the critically-acclaimed series The Room and its many sequels and spin-offs.

Old Sins continues the franchise’s engaging puzzle-based gameplay while introducing new elements such as multi-room environments to explore and a tragic story about a missing engineer and his wife.

The trail leads you to the attic of the couple’s home, where you discover a mysterious old dollhouse brimming with obscure clues, contraptions, and secret passageways.

Since releasing on mobile, the developer has rebuilt Old Sins’ objects, environments, and overall visuals to match up with the quality of PC releases, making this the definitive way to experience the latest entry in one of the best point-and-click series.

For a point-and-click adventure game that won’t take you too long to complete, we suggest checking out Rusty Lake Hotel, a horror mystery from the creators of the Rusty Lake and Cube Escape series.

In it, you’re tasked with preparing dinner for five guests staying at the prestigious Rusty Lake Hotel over the course of a week.

Things quickly take a turn for the worse when guests start turning up dead, requiring you to search for clues, solve puzzles, and piece together evidence to sleuth out the murderer.

The game has vibrant 2D hand-drawn characters and environments and takes roughly 2-3 hours to beat, depending on how you play.

Who could forget the stretch of insanely popular, narrative-driven adventure games released by Telltale games throughout the early 2010s.

Each one was based on a different popular franchise spanning video games, movies, television, and books, including the award-winning zombie series The Walking Dead.

You play as a convicted criminal given a second chance at life who encounters an orphaned girl in need of protection in a hostile world dominated by undead monsters.

The game is prone to putting you in morally gray situations that force you to make tough decisions that impact the outcome of the story and characters you meet along the way.

Another standout title in Telltale’s catalog is The Wolf Among Us, a dark and gritty detective thriller based on the award-winning Fables DC comic book series.

Set in an alternate universe where fairytale characters have adapted to modern civilization, the game has you play as Bigby Wolf, aka the big bad wolf.

Following the murder of a mysterious woman, Bigby sets out to investigate the crime only to find himself diving deeper and deeper into a pool of conspiracies taking place right in Fabletown.

Like TWD, there are a total of five acts that see you making hard decisions that will affect the outcome of the story and determine whether Bigby rises above his troubled past or succumbs to his inner rage.

Grim Fandango is a traditional point-and-click adventure game that is best enjoyed today via a remastered version with updated graphics, sounds, and controls.

For those unfamiliar, the story takes place in an alternate world called the Land of the Dead, where all souls end up after they die.

You play as Manny Cavelera, an afterlife travel agent who discovers his boss has been rigging the system for years and decides to set things right once and for all.

He sets off across the Land of the Dead in search of evidence to prove his boss’s corruption, along the way encountering an eccentric cast of fully-voiced characters that offer hilarious dialogue interactions. 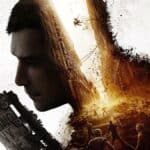