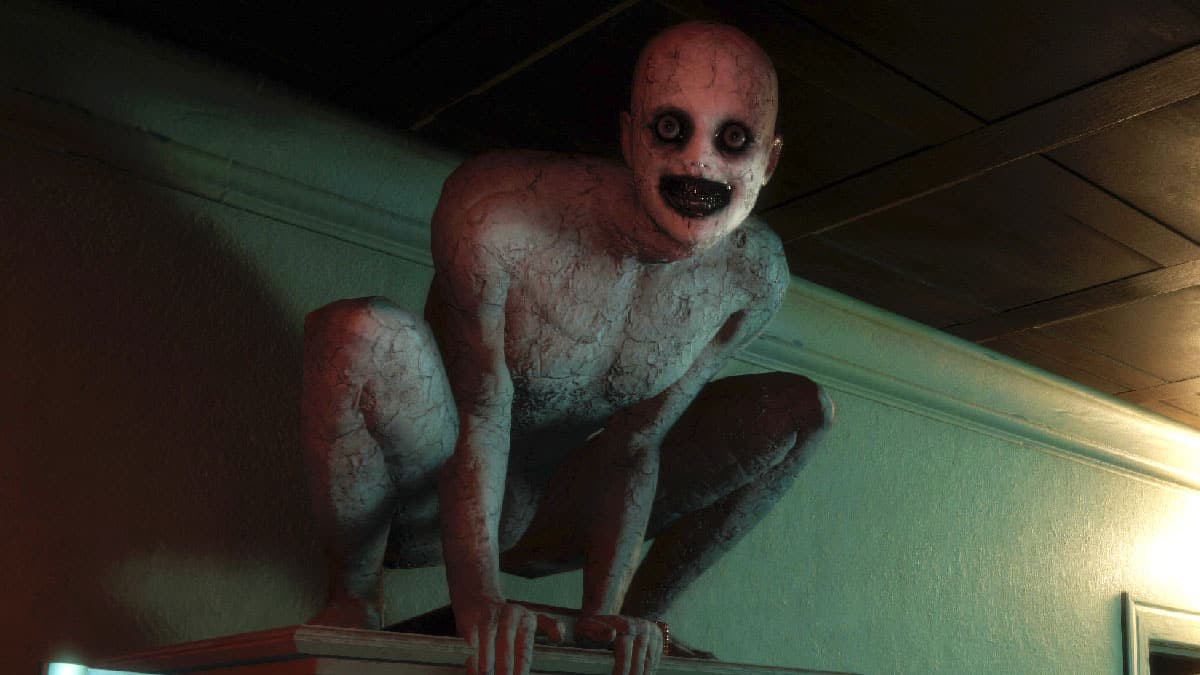 If you’ve been searching for a creepy new horror game to scratch that spooky itch and make your skin crawl, then you’ve come to the right place.

From tense survival horror adventures to Lovecraftian nightmares brimming with madness and despair, we’ve got something for every horror lover.

In this list, we’ll help you find your new favorite game by highlighting the best horror games on Steam, PlayStation, Xbox, and Nintendo Switch.

This includes new indie horror games and horror multiplayer games that will have you and your friends jumping out of your seats.

First up on our list is the indie horror game The Mortuary Assistant, which tasks you with examining and preparing the deceased completely alone.

As if this wasn’t creepy enough, the mortuary you’re working at is haunted by a demonic entity that likes to stir up trouble.

From messing with the lights to reanimating corposes and creepily staring at you from dimly lit halls, the demon is an ever-looming threat that never lets up.

This adds a lot of tension to gameplay and is further complemented by an intriguing mystery about your character’s backstory.

The Quarry is the latest title to come from Supermassive Games, best known for interactive cinematic thrillers like Until Dawn and The Dark Pictures Anthology.

This time around, you’re assuming control of 9 teens as they try to survive their last night at Hackett’s Quarry summer camp.

Standing in their way is a host of supernatural creatures and violent locals who aren’t too keen on the counsellors’ illicit acitivities and presence.

Much like its predecessors, it revolves around choice-driven gameplay that impacts which characters make it out alive and which meet their untimely demise.

The next spooky game we suggest picking up is MADiSON, a psychological first-person horror puzzle game by Bloodious Games.

In it, you play as a young man who becomes possessed by a demon and is forced to confront them before an evil ritual takes place.

This is done by solving environmental puzzles using various tools, including an instant camera with the power to photograph clues from an alternate demon world.

As you progress, new parts of the house become explorable to reveal new secrets, jumpscares, and chase sequences that will have you screaming out loud.

In it, players find themselves trapped in a dark, Victorian city plagued by an ancient curse that turns its citizens into ghastly enemies and monsters with acute senses.

The goal of the game is to escape the city using a unique arsenal of weapons, tools, and traps that favor stealthy playstyles.

Each of these will come in hand as you explore an intricate, hand-crafted city eavesdropping on characters and peeking through door cracks.

If exploring the backrooms sounds like a fun, spooky way to kill time, then The Complex: Found Footage is the perfect horror game for you.

In it, players are invited to pick up a VHS camera and immerse themselves in a mysterious story involving infathomable, dream-like structures.

Gameplay is best described as that of a walking sim, with most of the scares coming from The Complex’s unsettling atmosphere.

One of the biggest indie surprises of 2021, Inscryption is a fantastic roguelike deckbuilder with satisfying progression and a dash of unsettling atmosphere.

It also happens to be the latest title from Daniel Mullins, creator of Pony Island and The Hex, and explores similar themes of horror.

In it, you take on the role of a prisoner forced to play a sadistic card game against an unhinged host with multiple personas shrouded entirely in darkness.

The thought of exploring your own mind can be a nightmare in itself for many players, a notion that In Sound Mind attempts to analyze.

Billed as a psychological horror game with frenetic puzzles and unique boss fights, it centers on a disorientating story with sentient mannequins, a feline companion, and more.

The search for answers causes you to have bizarre visions and even more bizarre encounters with a host of imposing horrors.

If you’re a more adventurous horror fan that gravitates towards weirder, more experimental titles, Golden Light may be right up your alley.

It’s presented as a dark comedy survival horror FPS with prop hunt gameplay and roguelike elements such as procedurally generated levels and spawns.

Each run sees you exploring spooky lo-fi 3D environments brimming with an eerie atmosphere and weird imagery such as meat monsters, floating heads, and the like.

Enemies are typically disguised as props you encounter and can be dealt with using various guns; Golden Light also features online co-op and versus modes.

For a fun lofi horror game, we suggest checking out Iron Lung by David Szymanski, best known for the retro-style FPS Dusk.

In it, you’re cast as a prisoner with a shot at freedom so long as they can successfully pilot a tiny submarine through an ocean of blood on an alien moon.

This is a lot easier said than done as several horrors lurk in the depths of these red waters which you can only view by taking still black and white images.

Relying mainly on sounds and minimal imagery, the game manages to create an unsettling atmosphere that preys on players’ imaginations.

Growing My Grandpa is another psychological horror game with a spooky lofi aesthetic and Cronenberg-inspired gore.

Identifying one of them as her grandpa, she starts to feed and care for it, having conversations, and eventually abiding by its strange logic.

While brief in its playtime, clocking in around 90 minutes, Growing My Grandpa is a standout indie horror experience for its rich story and dark atmosphere.

Depicted in a lovingly hand-drawn penciled art style, Mundaun weaves a psychological folk horror tale set in a dark and secluded valley of the alps.

Players take on the role of Curdin, a man who returns to his grandfather’s hometown for his funeral under mysterious circumstances.

After he finds his grandfather’s grave completely empty, he tries to get answers from the locals but ends up with more questions than answers.

Seeking out the truth, he venture to the top of the town’s mountain where he’ll have to solve puzzles and survive hostile encounters with scary enemies.

The Excavation of Hob’s Barrow

Coming from beloved indie developer Cloak and Dagger Games, The Excavation of Hob’s Barrow is another folk indie horror adventure.

In it, you play as an antiquarian who travels to a small rural English village in hopes of documenting the treasures buried within its barrows.

However, upon arriving, strange events start to unfold that prompt further investigation despite the townsfolk’s weariness to help.

Tormented Souls is a throwback to classic survival horror series like Silent Hill and Resident Evil with modernized controls and dynamic camera options.

Players take on the role of Caroline Walker as she investigates the disappearance of twin girls at an abandoned mansion.

After Caroline wakes up naked and hooked up to a strange machine, she’s forced to fight for her life as dark forces try to prevent her from uncovering the truth.

Gameplay has you solving intricate puzzles throughout the mansion and its grounds as well as scavenging resources and fighting back against unspeakable horrors.

To this point, the game pays homage to horror cult classics while framing its gameplay around tense stealth sequences designed to get your blood pumping.

The story centers on a hitchhiking woman that arrives at a small roadside motel only to find a creepy owner and unsettling atmosphere.

What ensues is a tense and terrifying struggle for survival as you try to avoid a bloodthirsty killer by hiding in closets and under beds.

Stay Out of the House

Stay Out of the House is another low poly horror game that takes its cues from old school slashers like The Texas Chainsaw Massacre.

Part survival horror, part immersive stealth simulator, it casts you as a young woman who gets kidnapped by a cannibal serial killer and locked in a cage.

After escaping confinement, she gets to work plotting her escape by hiding in vents, picking locks, and setting traps while trying to avoid detection.

In addition to the killer, there are family members throughout the property that will alert them of the woman’s presence should she they see or hear her.

In it, players follow a young girl who arrives home after a major surgery only to be met by a strange mannequin claiming to be her mother.

The story takes place over the course of a week during which the girl can comply with mother’s odd demands and complete various chores, or rebel.

Depending on the player’s actions, they’ll receive a different ending with startling revelations that touch on themes of sickness, abuse, and death.

Forewarned is a co-op-driven survival horror game that sees up to four players delving into ancient Egyptian ruins to investigate some strange phenomenon.

The main goal of the game is to uncover archaeological discoveries, hunt treasure, and unravel a mysterious curse while avoiding danger.

Your biggest obstacle down in the tombs is the Mejai, cursed mummies with unique abilities that allow them to be identified and cleansed while in their spiritual form.

The game uses randomization to ensure no two runs are the same and features a loot system that lets you upgrade equipment and purchase more powerful tools.

Little Nightmares II is the follow-up to Tarsier Studio’s atmospheric puzzle-platformer that doubles down on the suspense and story.

In it, you play as Mono, a young boy who finds himself trapped in a distorted world that’s being affected by a strange transmission from a distant signal tower.

Mono teams up with Six (the protagonist from the first game) in hopes of reaching the tower and unlocking its dark secrets.

Along the way, the pair will have to sneak, jump, and sometimes fight their way past demented dolls and disturbing adults.

While the Resident Evil is best known for its challenging survival horror gameplay,  Village is somewhat of an exception that plays fast and loose with its horror elements.

Set three years in the future, it sees RE7 protagonist Ethan Winters living comfortably with his wife Mia and newborn daughter before things take a turn for the worst.

Transported to a remote snowcapped village in Romania, Ethan sets out to save his family while being pursued by various supernatural creatures.

What ensues is an action-packed rollercoaster with werewolves, creepy dolls, and other supernatural oddities that make for a cinematic experience.

To wrap up this list, we’re highlighting Mirror Layers, a frankly underrated horror game that centers on asynchronous multiplayer gameplay.

In it, players are tasked with solving a horror mystery in a creepy house while stalked by an evil mannequin with blades for limbs.

Getting out alive requires you to solve puzzles, inspect items, and interact with other real players via an in-game social network called Propaganda.

This ends up playing a vital role in completing in the game as players share their theories, evidence, and tips for overcoming every challenge. 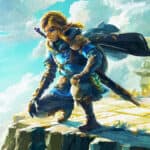 Best Games Like The Legend Of Zelda
Related Topics Tags