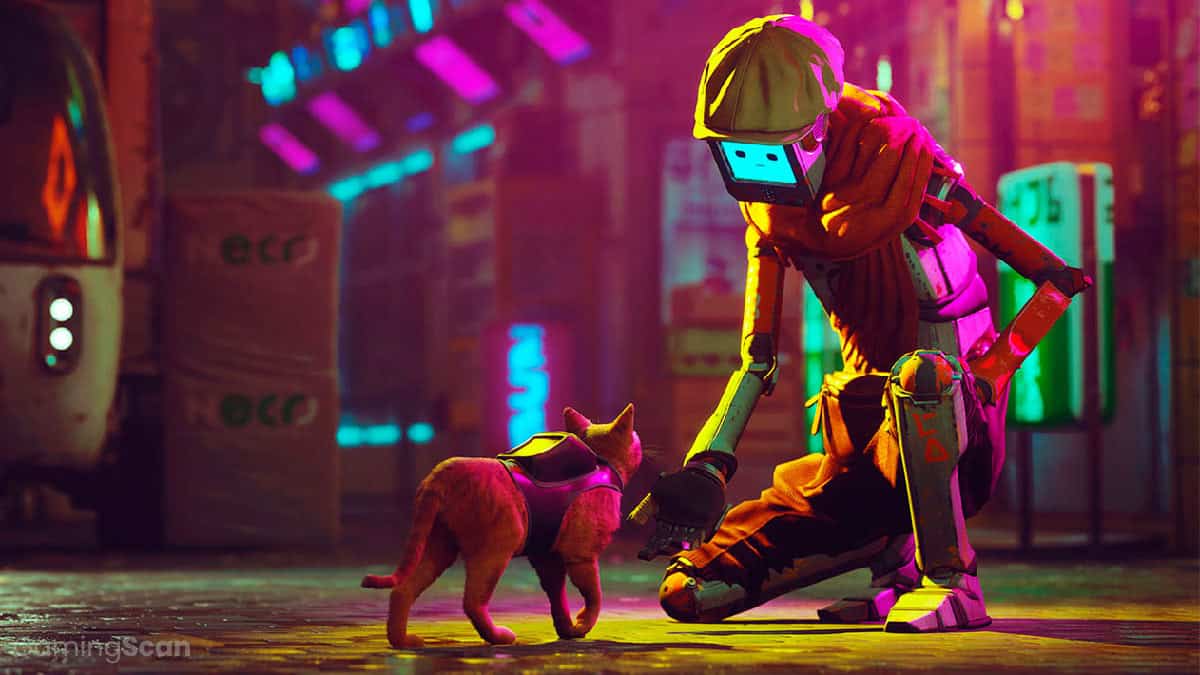 If there’s one thing history has taught us, it’s that the internet loves consuming any and all cat-related media, including BlueTwelve Studio’s cyberpunk adventure game Stray.

Deemed both a critical and commercial success soon after its release, the game has also managed to grow an active modding scene on PC.

In this list, we’ll highlight the best Stray mods that let you play as different animals, unlock new accessories for your feline, and give the game a completely new look.

For more modding recommendations, check out our growing library of curated lists, and comment below with your favorite Stray PC mods! 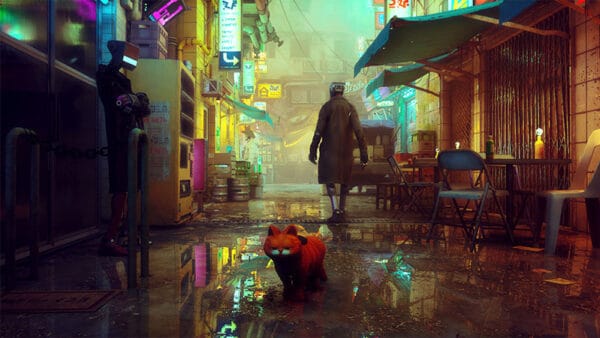 To get started, we’re including one of the most popular Stray mods you’ve likely seen plastered all over the internet soon after the game’s release.

Created by Chris Rubino, the Garfield mod transforms Stray’s orange tabby cat into the iconic lasagna-obsessed feline we all know and love. 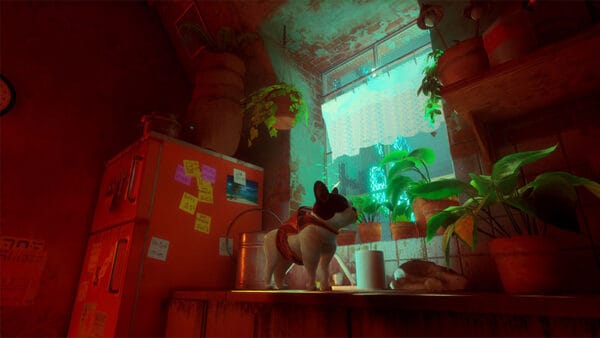 Play Stray as a Dog

Happy Puppy is another Stray model swap mod that’s taken the internet by storm and comes courtesy of Chris Rubino.

Like the Garfield mod, it gives Stray players a fresh way to experience the game, particularly those who consider themselves dog lovers.

Stray’s orange cat is replaced with an adorable French bulldog complete with bark sounds when pressing the ALT key button. 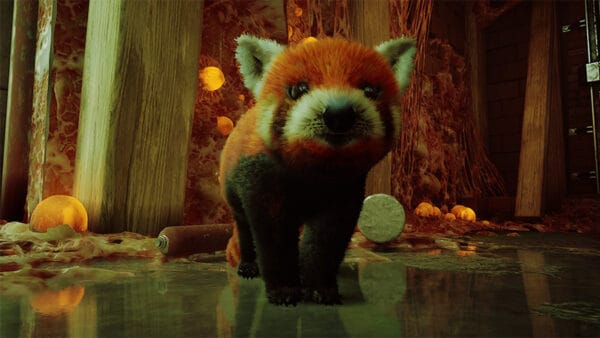 Play Stray as a Red Panda

We would like to extend gratitude to whoever commissioned NorskPL to create this next mod; otherwise, we would probably never get to play Stray as a Red Panda.

It’s the perfect type of random model swap that you would never think of but the final product is just too cute to pass up.

Once installed, this mod transforms Stray’s default kitty into a realistic red panda whose fur is so fluffy it might just melt your heart. 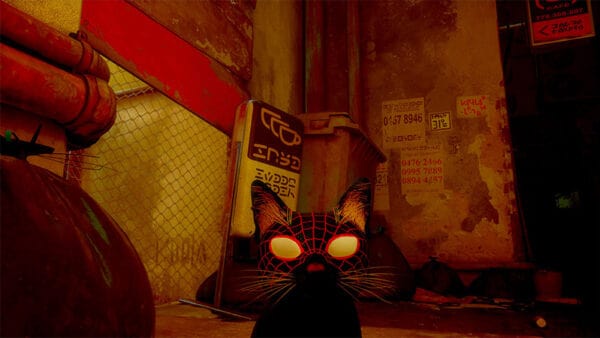 If fluffy red pandas, happy bulldogs, and sarcastic cartoon cats aren’t cutting it, you can always go in a more unofficially licensed Marvel direction and play as Spider-Cat.

Yet another Chris Rubino joint, the aptly named Milo Morales mod lets you play as a web-slinging feline based on Miles Morales’ Spider-Man.

Of course, you can’t shoot webs out of your paws but at least now you look the part of a superhero while saving the walled city. 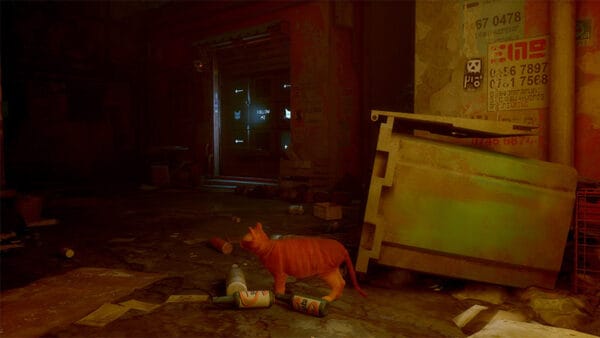 In the real world, cats don’t wear superhero costumes (at least not by choice) nor maintain a fit physique once they’ve been an indoor cat for long enough.

So, if you’re looking for a more accurate portrayal of what an everyday house cat would look like in Stray, good ol’ Chris Rubino’s Slightly Fat Cat mod is your best option.

This makes a slight adjustment to Stray’s protagonist to give him a little something extra in his gut without slowing him down. 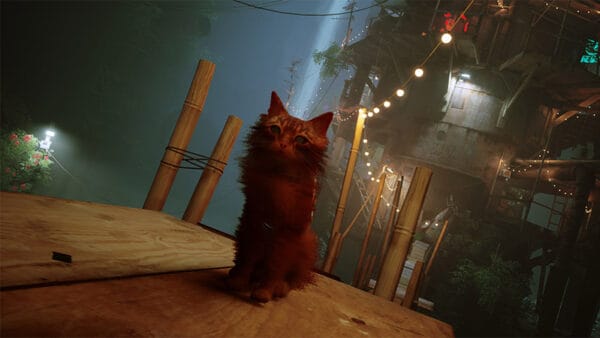 Instead of adding girth to the Stray cat’s belly, why not add more volume to his luxurious coat with NorskPL’s Fluffy Fur mod.

This is sure to attract more love and affection from the walled city’s robotic denizens while at the same time striking fear into those dreaded Zurks.

The creator has assured anyone downloading that this mod will work with all other texture mods and cat model mods currently available for Stray. 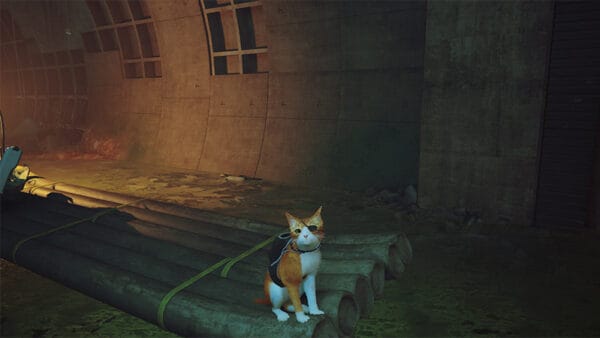 Speaking of mods that play well with other mods, this next trio is a great way to spice up the Stray cat’s look with some fun accessories.

There’s the Newsboy Cap, which gives off “distinguished lad” vibes, Glasses for the “well-read” feline, and an Eyepatch that screams “don’t mess with me, mister.”

Feel free to download all three and see which one fits your furry friend best as they are all compatible with other popular Stray cat color mods. 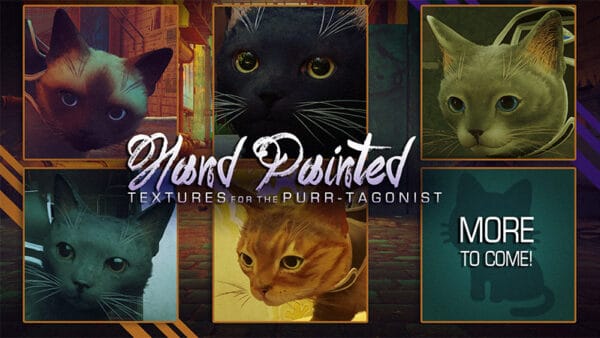 Mod: Pick of the Litter

While we’ve already covered several mods that let you swap out Stray’s cat model entirely, some players may want something a bit simpler such as a different cat color or breed.

This is where mods like Pick of the Litter come in handy by bundling together different hand-painted textures for making the cat black, white, grey, tuxedo, Siamese, and many more.

Each one has a high level of quality that can be hard to recreate on your own and the modder states they plan on adding more variants in the future. 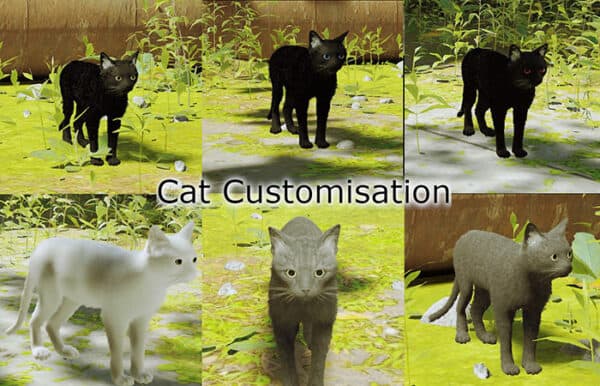 Create Your Own Stray Cat

Of course, if you’re willing to put in the work and design your own furry friend, you can always try your hand at using Vivi’s Cat Customisation mod.

This two-in-one tool allows you to make both simple changes to Stray’s existing model as well as swap it out for a completely different pattern.

There are a handful of preset recolors included as well as detailed instructions for doing everything from scratch. 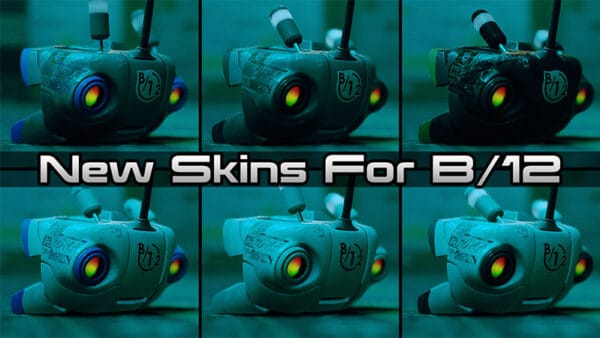 Unlock New Skins for B12

Mod: New Skins for B12 Drone

We’ve shown a lot of love for Stray’s feline protagonist in this list but what about his hacking drone companion B12?

With Piro’s New Skins for B12 Drone mod, you can expand the endearing robot’s wardrobe with 12 unique textures.

Each one recolors different parts of B12’s body to create subtle yet distinct variations that go a long way toward making it stand out. 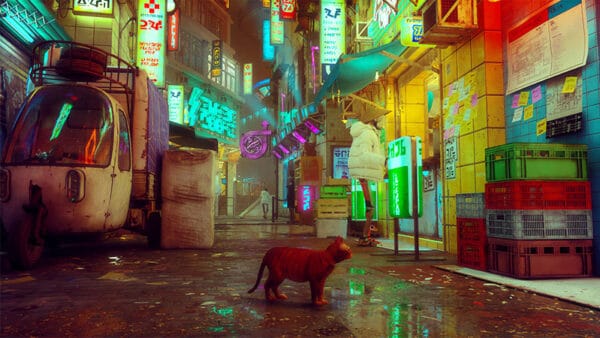 While most mods serve to add more content to the base game, some are intentionally made to remove or hide certain content.

Such is the case with Chris Rubino’s Invisible Backpack and Drone mod, which prevents the cat’s bag and robot companion from showing up in-game.

This frees up some of the screen real estate so that players can capture cool-looking screenshots without either getting in the way. 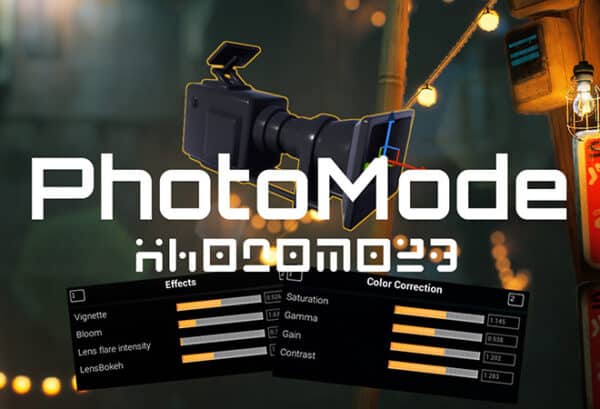 Add a Photo Mode to Stray

Speaking of screenshots, our next mod suggestion makes it a lot easier to take in-game photos while visiting your favorite locations.

Created by DmgVol, the PhotoMode mod lets players tap into their inner photographer with a proper Stray photo mode jam-packed with useful tools and sliders.

With it installed, players can mess around with Stray’s color correction, depth of field, bloom, lens flare, and apply over 20+ filters before snapping a pic. 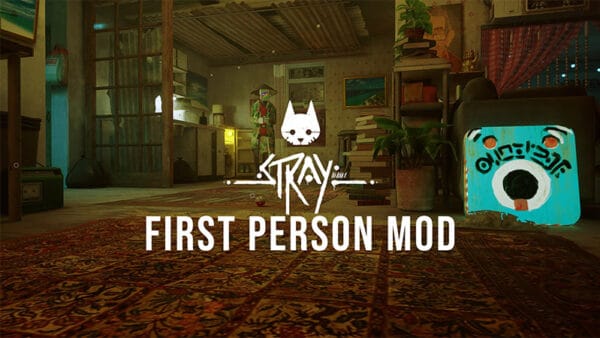 If you’re looking to experience Stray from a fresh perspective, Jessica Natalia’s First Person mod is a great way to spice up your next playthrough.

This moves the camera to the cat’s eye level for a more immersive POV that can feel somewhat jarring until you get used to the change.

Platforming, in particular, is a bit of a struggle from the new perspective but gets easier the more time you spend playing in first-person. 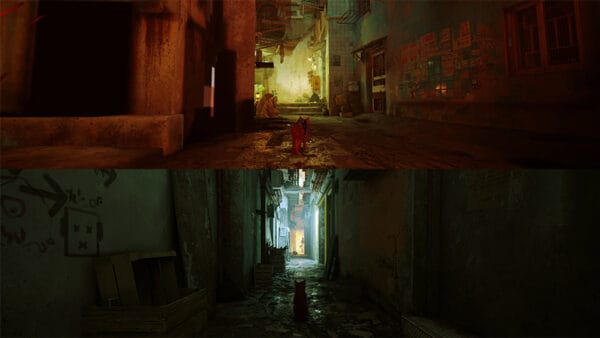 Another mod that’s been making the rounds online is KangieDanie’s Splitscreen mod, which performs the magic trick of turning Stray into a co-op compatible game.

This is pretty significant considering there’s no in-game way to unlock co-op in Stray at the moment, so we hope to see BlueTwelve support this mod officially in the future.

So far, users have managed to get up to four players and subsequently four cats to load into the same session using local split-screen. 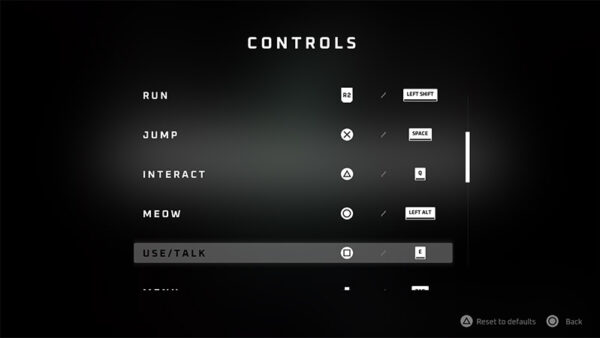 Anyone who’s tried to play Stray on a PC using a controller will already know that the game uses the Xbox controller layout by default.

This can be kind of annoying if you’re one of the many players who use their PlayStation controller to play PC games wirelessly. 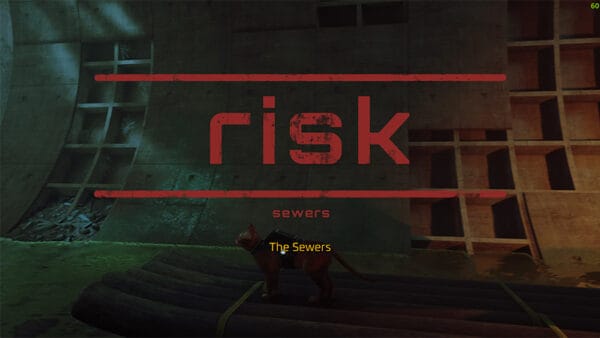 One of Stray’s most interesting mysteries is the strange android language that pops up on-screen during new chapters as well as on walls, signs, and graffiti.

Even though players have already done the work of translating what each symbol means, you’ll need a mod like awberry’s Latin Alphabet to get the translated text to appear in-game.

Currently, it only works with chapter titles so to decode the remaining in-game assets; the mod creator suggests using a translation tool with Stray’s original font file. 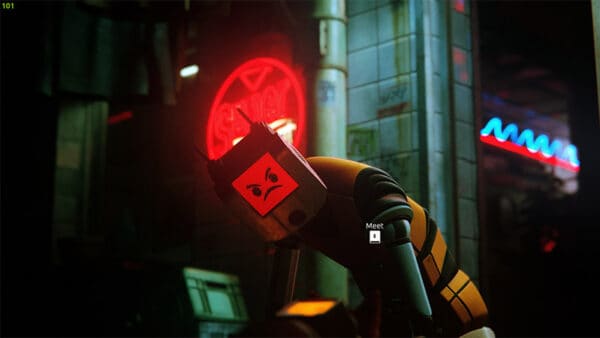 Give Stray a Dramatic Look

Reshades are always a fun way to switch up a game’s appearance and Stray has some of the best options for modifying its visual presentation.

One of our favorites is montmaj’s Zurk Cinematic Reshade, which uses horror game techniques to assign Stray a grittier aesthetic with stronger lighting and noise effects.

The final result is a dramatic look that makes the game feel more cinematic, especially during those tense Zurk chase sequences. 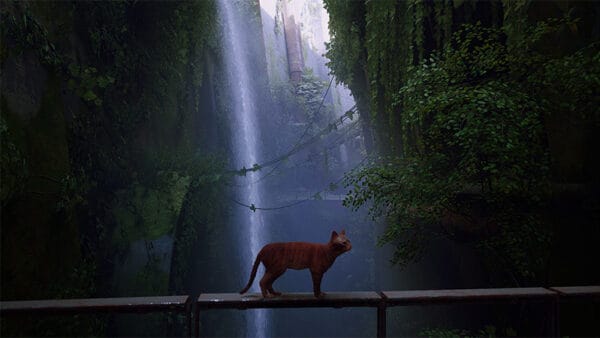 Although Stray’s graphics are already pretty stunning out the gate, players looking to achieve a more photorealistic quality will want to give this next mod a shot.

The difference in quality is most visible during animations but you’ll find landscapes and other environmental objects benefit greatly from brightness and color adjustments. 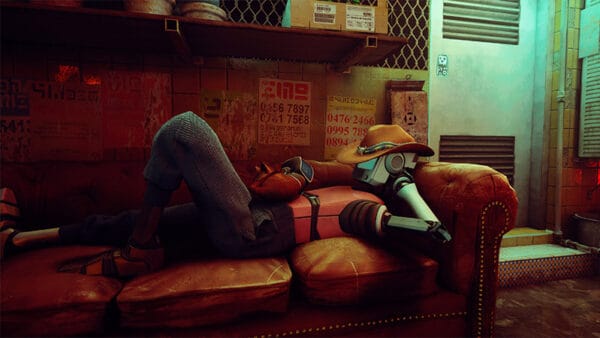 Take Stray’s Visuals to the Next Level

Building off of the previous mod, Xaijin’s Maximum Meow mod allows players with powerful machines to push Stray to its absolute limits to achieve ultra-realistic results.

It does this by adding tone mapping, true volumetric fog, and screen space color match shading among other features while disabling Stray’s chromatic aberration and film grain effects.

There are a lot more changes than we’ve listed here, so make sure to read through the full list in the mod’s description and verify that your PC can even run it before installing. 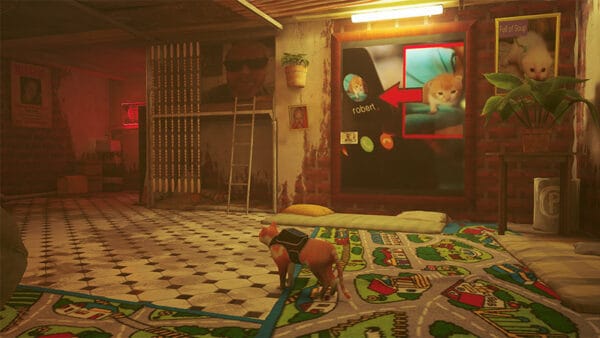 Our final mod suggestion is the Funny Textures Pack, which brings the playful spirit of repainted mods to Stray by letting you swap out various textures that appear in the world.

It comes courtesy of Narwhix, who states “this mod replaces about 100 modular textures with various memes, images, or random junk I have on my hard drive.”

As a result, players can expect to see plenty of random Garfield, Among Us, and Breaking Bad images along with jokes that are best suited for the 18+ crowd. 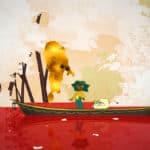 Spiritfarer Guide: How To Get Spirit Flowers
Related Topics Tags