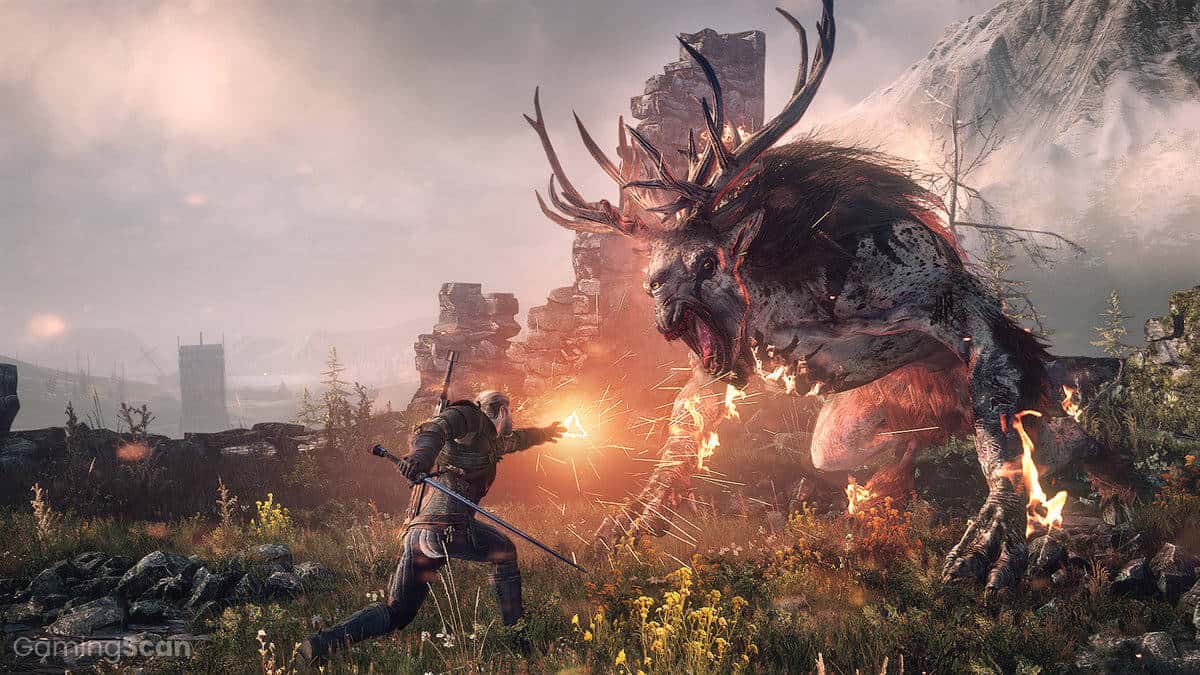 There’s something so exciting about immersing yourself in different worlds that don’t play by our rules or limitations, one where humans, magic, and fantastical creatures all coexist.

Of all the genres in gaming, fantasy games are particularly great at keeping us engaged by presenting interesting characters, stories, and role-playing game mechanics.

Our first recommendation for fantasy lovers is Hood: Outlaws & Legends, a cooperative PvPvE stealth-action game set in a medieval fantasy world dominated by rival gangs motivated to steal from the rich and spoiled.

In it, 4v4 squads race to infiltrate a fortified castle, bypass its guards and steal the key to a treasure chest before the opposing team can do the same.

Once detected by the AI or other players, Hood switches to a fast-paced action game complete with medieval swords, axes, and bows assigned to different classes.

While reception for Hood has been quite mixed, the developer has plans to address core gameplay issues and introduce new maps, characters, modes, and events in future updates.

Valheim casts you as one of Odin’s fallen warriors whose soul ends up in the tenth Norse world, a sprawling primordial pool with untapped resources and unmeasured threats.

The game leans heavily into the Viking fantasy, allowing you to build your very own settlements in resource-rich biomes and defend them from menacing trolls, sea monsters, and more.

To survive in Valheim, you’ll need to keep your Viking fed, well-rested, and safe from enemy raids by constructing powerful tools, weapons, and fortified camps across each region.

While the game may be a bit light on the story, it features lore-friendly bosses and updates familiar RPG mechanics and systems for a more streamlined experience.

Fans of deck-building games should consider checking out Trials of Fire, a tactical roguelike strategy game that sees you exploring an unforgiving wasteland.

Gameplay revolves around issuing commands to unique Heroes using one of three character-specific decks of cards tailored for different playstyles.

Turn-based combat in Trials of Fire rewards movement and positional plays that give you the edge on your opponent as well as powerful card synergies that combine your Heroes’ strengths.

Outside of battle, you can manage your party’s loadout, upgrade gear, and travel across the sprawling overworld of Ashe to meet new characters and collect new rewards.

Outward is the perfect game for anyone who finds joy in braving harsh environments and surviving even when the odds are stacked against them.

In it, you play as an ordinary adventurer thrust into the dazzling yet deadly world of Aurai, home to threatening creatures, infectious diseases, and peril around every corner.

Embarking on expeditions lets you explore the deepest corners of Aurai’s world and acquire new weapons and spells to slay any foes you encounter.

There’s a great deal of mission variety, including dungeon crawling, and an assortment of special skills you can invest in while also managing your character’s basic needs.

It has you taking up the mantle of multiple heroes and magical creatures across campaigns with friends where you’ll encounter challenges, manage your stats, and perform dice rolls directly on the board.

When playing as a GM, you’ll have a chance to wow your friends with engaging map layouts filled with events and opportunities to rally together for a common goal.

TaleSpire includes a myriad of tools to achieve your unique fantasy world vision, complete with a growing library of visual and audio assets that can be shared online.

HammerHelm offers a special blend of fantasy-themed adventuring, town-building, and role-playing that make for a one-of-a-kind experience.

You play as a dwarf that decides to build their own town after they’re exiled from their underground community for believing dwarfs can live on the surface.

Related:Best Base Building Games On PC

Fulfilling your role as leader, you’ll have to fight to keep your townspeople safe from enemies and fulfill their wishes by completing quests and crafting items.

The game features 45+ buildable structures ranging from farms and breweries to weapon-smiths and cooking stations, as well as 100+ craftable armor, weapons, and décor to collect and use.

As far as free-to-play gacha games are concerned, you could do much worse than Genshin Impact, which boasts vibrant fantasy visuals and fast-paced combat centered on class-based heroes.

There are a ton of different missions to keep you coming back and a diverse roster of unlockable characters that, admittedly, require a lot of time to grind for unless you’re willing to spend some money.

While the writing can be hit or miss for certain characters and storylines, the wealth of content and exciting locales go a long way towards keeping your attention.

Last but certainly not least, Genshin Impact supports crossplay between PC, console, and mobile, making it an absolute must-play fantasy game for gaming with friends on different platforms.

This list wouldn’t be complete without mentioning at least one of the Elder Scrolls games, so we thought we would include the most popular and current entry to date.

Set 200 years after Oblivion, Skyrim sees you embarking on a quest to defeat Alduin the World-Eater, a terrifying dragon believed to bring about the end times.

You play as a Dragonborn capable of harnessing powerful spells and weapons to crush your enemies and traverse the game’s vast open world.

Whether it’s your first time or one of many return trips to Skyrim, you can enhance your gameplay experience by installing some of the best Skyrim PC mods.

Another great get for fantasy fans on a budget, Path of Exile is a free-to-play dungeon crawler that has you battling monsters and completing quests in exchange for experience points and powerful loot.

You play as an Exile forced to survive on the dark continent of Wraeclast, where you’ll set out to exact revenge against those who wronged you.

Aside from personalized character builds, the game features competitive online PvP events and the ability to personalize your own town, called Hideouts.

While Switch owners may be more inclined to play Monster Hunter Rise, anyone who owns a PC, Xbox, or PlayStation console can dive into Monster Hunter: World’s fantasy-rich universe.

In it, you play as a fresh-faced hunter in a new world brimming with life in all shapes and sizes, most notably, an assortment of giant dragons and other fantastical beasts.

Like previous entries, the game boasts a massive selection of weapons to master, including upgradeable weapon trees, charms, and decorations to hone in on a particular playstyle.

If you like what you see in the base game, then consider picking up the Iceborne expansion, which adds a host of new monsters to battle, a previously undiscovered region, additional weapons, and armor.

For some good ol’ hack n’ slash combat, we recommend checking out Vermintide 2, an underrated action game that plays like Left 4 Dead if it was set during medieval times.

In it, up to four players rally together to battle hordes of rat-like men called Skaven using class-based skills and over 50 different weapon types.

Gameplay centers around exploring damp swamps and lush forests as you try to hold off Skaven troops and complete objectives throughout the environment.

Vermintide’s combat has an incredibly meaty and visceral quality to it that will have you scouring the map to exterminate every last enemy you can find using whatever weapon you can get your hands on.

Sitting comfortably near the top of Supergiant’s catalog of games is Pyre, a narrative-driven RPG that sees you guiding a band of exiles to freedom by participating in a series of ancient competitions.

Battles have you choosing three heroes from an ensemble cast to square off in Rites, which function as combative soccer matches.

Each party member possesses different passive abilities, assigning them a unique playstyle that can be further enhanced via mystic Talismans and Masteries.

Win or lose, Pyre’s story advances regardless of each Rite’s outcome, which may result in some characters fulfilling their dreams and others being lost to purgatory.

Although many of us grew up off of classic RuneScape, the MMORPG has received several updates and new iterations over the years to keep with the times.

And while old-school RuneScape is still alive and kicking, the new version boasts better graphics, a host of quality of life improvements, and new challenges, skills, and quests.

There are also various professions to take up, community events, and endless opportunities to make friends as you explore the game’s one-of-a-kind fantasy world.

Bear in mind that RuneScape is notoriously grindy and will require a hefty time investment to upgrade characters; a paid membership is also available that includes additional skills, quests, and map locations.

In it, you forge a party from 6 preset characters or create your own before venturing into the vast and layered world of Rivellon, where you can go anywhere, talk to anyone, and interact with everything.

Throughout your journey, you’ll get to know the ins and outs of your party and watch as they develop relationships and combine their elemental powers to blast away opponents in flexible turn-based battles.

Original Sin 2’s main selling point is just how creative it lets you get with approaching challenges, allowing you to throw objects around, kill off any NPCs that get in your way, and even command an army of chickens.

The Witcher 3’s visually stunning fantasy open-world is simply too inviting to not explore and offers plenty of opportunities to venture off the beaten path and into the unknown.

The game casts you as Geralt of Rivia, a monster hunter known as a Witcher, who sets off on an adventure to find his adopted daughter as she’s pursued by an evil cult known as the Wild Hunt.

Combat sees Geralt wielding two swords, a silver blade for monsters and a steel one for humans, along with magical powers that give him an edge both in and out of battles.

While there’s still some debate about whether or not Star Wars is technically fantasy, if we had to stake our claim, we’d argue the series classifies as sci-fi fantasy, giving us free rein to include it on this list.

And although there are plenty of great Star Wars games to recommend, we’ve decided to highlight Star Wars Jedi: Fallen Order for managing to capture the cinematic quality of the films and apply it to the video game medium.

Set after the events of Episode III, the game sees you playing as Cal Kestis, a Jedi Padawan on a mission to uncover the mysteries of an ancient civilization in a galaxy far, far away.

Gameplay is a mix of close-range combat, open-ended exploration, and 3D platforming on par with third-person action series like Dark Souls, Tomb Raider, and Uncharted. 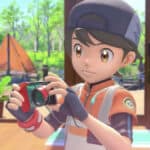