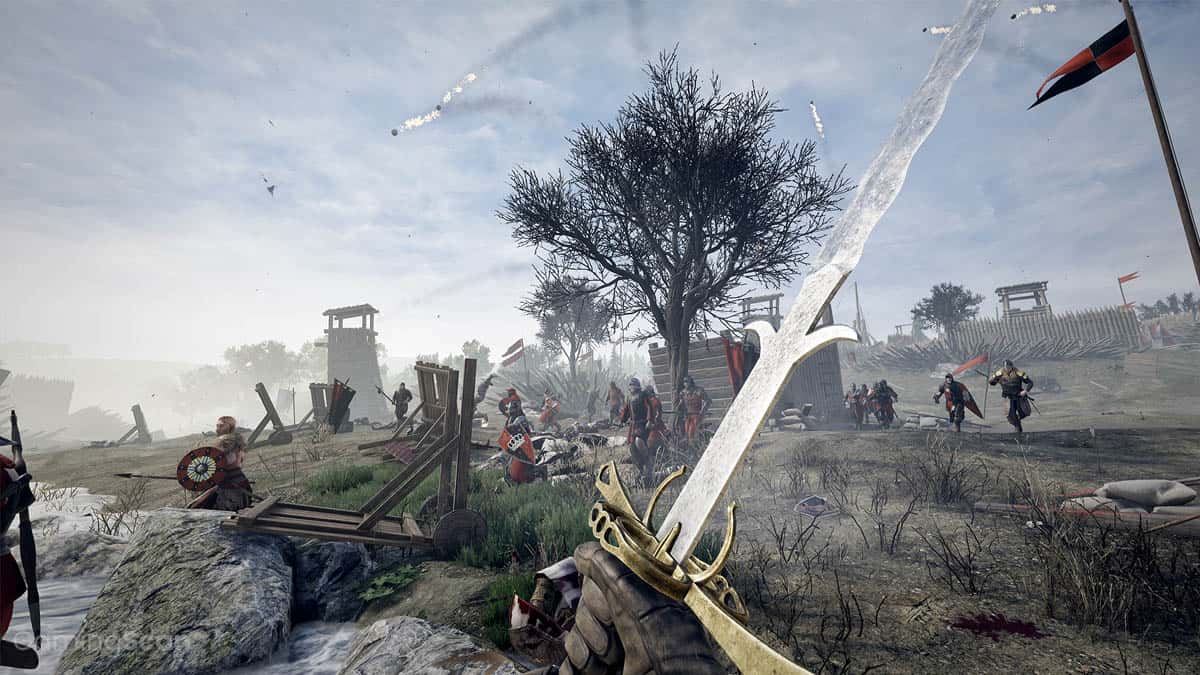 If you get excited by knights in shining armor, mugs overflowing with mead, and performative sword combat, then you’ll love our picks for the best medieval games.

In this list, we’ll highlight the best medieval games to play in 2022 on Steam, PlayStation, Xbox, and Nintendo Switch that transport you to The Middle Ages.

We’ll be updating this list in the future with new titles, so make sure to check back and let us know if we missed any of your favorite medieval titles!

Set during the 14th Century “Dark Age,” Going Medieval sees you attempting to rebuild society in a world where 95% of the global population has fallen victim to rampant plague.

In the wake of society’s ashes, nature has reclaimed most of the land, providing the perfect foundation for a new civilization.

This is where you step in, guiding the few remaining survivors to establish a new home safe from not only disease but also outlaws, barbarians, and religious fanatics.

You’ll design, build, and expand your own settlement, going from humble wooden huts to stone castles and underground strongholds.

If you’ve ever dreamed of running a magical school like Hogwarts, then Spellcaster University is the perfect game for you.

In it, you’re tasked with building a medieval university, managing its budget, and recruiting teachers to instruct students in the art of spellcasting.

The game uses a deck system that introduces unique cards according to the magic taught at your schools, with specializations ranging from necromancy to demonology and everything in between.

Additionally, you’ll have to devise strategies to combat random in-game events such as attacking orc tribes and inspections from pushy academic authority figures.

Castle Flipper is a unique building sim that allows you to become a medieval royal craftsman looking to build their own kingdom.

In it, you take on restoration quests that have you building, cleaning, and repairing objects and structures throughout massive, sprawling castles.

There’s a lot of room for customization and self-expression; from picking out different plants to decorate the courtyard to designing the look of flags and pennants.

If you enjoy Castle Flipper, make sure to check out the developer’s next upcoming game, Ironsmith Medieval Simulator.

Next up, we have one of the best video game remasters and action RPGs in general, Dark Souls Remastered.

Set in the dark medieval kingdom of Lordran, the game sees you embarking on a harrowing pilgrimage littered with grotesque and deadly monsters.

Dark Souls Remastered includes the base game along with the Artorias of the Abyss DLC.

Kingdoms and Castles falls under the city-builder genre of games but with the twist of it being set during medieval times.

In it, you play as the leader of a humble colony tasked with transforming it into a sprawling kingdom with taverns, churches, and more castles than you can dream of.

As your villages stockpile resources and wares, you’ll have to hold off invasions by Vikings with strategically placed soldiers, archer towers, castle walls, and more.

The game has a vibrant ‘blocky’ art style that complements the medieval setting, and placing down blocks feels satisfyingly snappy.

As far as grand strategy games are concerned, Crusaders Kings is right up there with Total War, Imperator: Rome, and Stellaris.

The series sees you guiding a dynasty throughout The Middle Ages, protecting and providing for your people while expanding your empire.

You can be a righteous god-fearing king who unites all the religious powers or branch off and do your own thing.

This is all while dealing with peasant rebellions, pilgrimages to unconquered lands, Viking invasions, and the typical drama that comes with royalty.

Like the original, it’s centered on a systems-driven medieval sandbox that lets you role-play as various character classes.

Whether you’re interested in becoming a famous jouster, wealthy tradesman, sword-for-hire, thief, or more, there are numerous paths to explore.

It’s an overall more polished experience that improves upon the first game in just about every way.

You can pick up one of the best medieval strategy games with Age of Empires II: Definitive Edition.

It features support for 4K resolution displays, high-definition graphics, a remastered soundtrack, and The Last Khans expansion with new campaigns and civilizations.

The classic sees you spearheading human history over the course of 1,000 years that will prove pivotal for mankind.

While it still plays relatively close to the original, quality of life improvements like better AI and gameplay balancing help elevate the now 20-year-old RTS.

Bad North is a challenging RTS that tasks you with defending your small medieval kingdom against hordes of Viking raiders.

Instead of directly fighting in battle, you handle the positioning and relocating of troops to deal with various invading forces.

Islands are procedurally generated and utterly unique in layout and appearance, providing the perfect opportunity to develop battle-tested soldiers capable of defeating the Vikings once and for all.

The learning curve can be brutal, but with some practice, you’ll be able to hold your own.

Up until now, we’ve been talking about a lot of games where you’re forced to fend off Viking raiders, but what about a medieval game that lets you play as them?

Northgard is another RTS game with city-builder mechanics that sees you leading a Viking clan as they settle on a mysterious new continent.

There’s the usual offering of resource gathering, settlement building, villager management, but what sets Northgard apart is its campaign structure.

Kingdom Come: Deliverance is a story-driven medieval RPG set in an open-world interpretation of the Holy Roman Empire.

In it, you take on the role of Henry, the son of a blacksmith who decides to join a group of rebels and protect others after his parents and village are slaughtered by raiders.

While you won’t find any dragons or magic, Kingdom Come: Deliverance’s medieval-based combat can be gratifying once you make it past the steep learning curve.

Set in medieval France, A Plague Tale: Innocence casts you as two siblings on the run after the English army raids their countryside estate and kills both their parents.

The game’s historical setting coincides with the Black Plague’s existence, resulting in there being human enemies and hordes of diseased rats you’ll have to avoid.

For a more thorough breakdown, read our full review, where we praise the game for its superb voice acting and engaging story.

Venturing off into medieval fantasy territory, Vermintide 2 is a fantastic co-op affair that sees up to four players fighting in brutal, bloody battles with waves of rat-like creatures called Skaven.

Gameplay has you exploring damp swamps and lush forests as you hold off Skaven enemies and complete objectives.

With the added luxury of modding on PC, Skyrim can feel like a completely different experience than you remember.

Whether you’re looking to remove the more notorious bugs, improve graphics, or add new regions to explore, there are many ways to make the game feel fresh even after a decade.

Set 200 years after Oblivion, it sees you embarking on a quest to defeat Alduin the World-Eater, a terrifying dragon believed to bring about the end times.

As a powerful Dragonborn, you’re given access to a variety of spells in addition to medieval bows, swords, shields, and axes.

The Witcher 3‘s fantasy-driven medieval open-world is simply too enticing not to explore and offers seemingly infinite opportunities to venture off the beaten path and into the unknown.

You play as Geralt of Rivia, a monster hunter on a mission to find his adopted daughter.

In addition to his two swords, Geralt wields magical powers that add an extra layer to combat and make battling enemies more satisfying.

When you’re not slaying monsters, you can do a bit of sightseeing, soaking up the game’s bustling cities, war-ravaged swamps, dense forests, and sprawling caves.

Few games manage to blend Lovecraftian horror with medieval dungeon crawling as nicely as Darkest Dungeon, a turn-based RPG that tasks you with recruiting and training a team of heroes as they traverse rugged environments littered with physical and psychological dangers.

Challenging turn-based battles are made more intense thanks to features like permadeath and an affliction system that assigns characters mental debuffs.

Conan Exiles is a survival game that features a hellish medieval open-world filled with monsters and resources you’ll need to build bases and weapons.

While it’s primarily multiplayer-focused, there’s also a single-player mode. It lets you carve out your own path and focus on the areas of the game you enjoy.

For you, this may mean discovering every piece of lore you come across, decking out your base with fancy furniture and decorations, or going around capturing NPCs and making them your slaves.

The sequel has you once again assuming control of the foul-mouthed goblin assassin Styx as he infiltrates the city of Körangar and uncovers a mysterious alliance between the dark elves and dwarves.

Styx possesses an assortment of abilities that let him clone himself, momentarily turn invisible, and craft deadly traps on the fly.

His naturally small build allows him to fit in barrels, drain covers, and anywhere else enemies would never think to find a dagger-wielding goblin.

Medieval Dynasty is another open-world survival game set during the Early Middle Ages.

The game sees you establishing your own colony in the hopes of turning it into a prosperous dynasty that will last for generations.

You’ll be defending your people from wild animals, providing food and shelter, and turning your small settlement into a bustling village.

This is in addition to meeting your main character’s needs and ensuring they have enough supplies to handle run-ins with bears, wolves, and anything else the game throws your way.

Best described as a medieval cemetery management sim, Graveyard Keeper sees you running a graveyard operation that eventually expands into other fields.

You can stick to burying bodies in the ground or start cashing in on all that extra meat by selling remains to the local butcher.

At times, you may find yourself having to cut costs just to keep the business afloat.

This can lead to tough moral choices like deciding to invest in quality ingredients for potions or just using whatever you can scrounge up in nearby caves and creeks, possibly poisoning the entire village in the process.

While T.A.B.S. uses over-exaggerated physics for comedic effect, Besiege swings the pendulum in the opposite direction in order to make things feel as realistic as possible.

There’s a lot of room for creativity since contraptions can come in various shapes and sizes, and can be outfitted with all sorts of medieval weaponry ranging from cannons to giant flails.

An online mode also lets you battle against other players in custom arenas or team up against the AI. 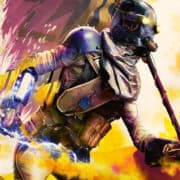 Rage 2 Review – Should You Play It?
Related Topics Tags