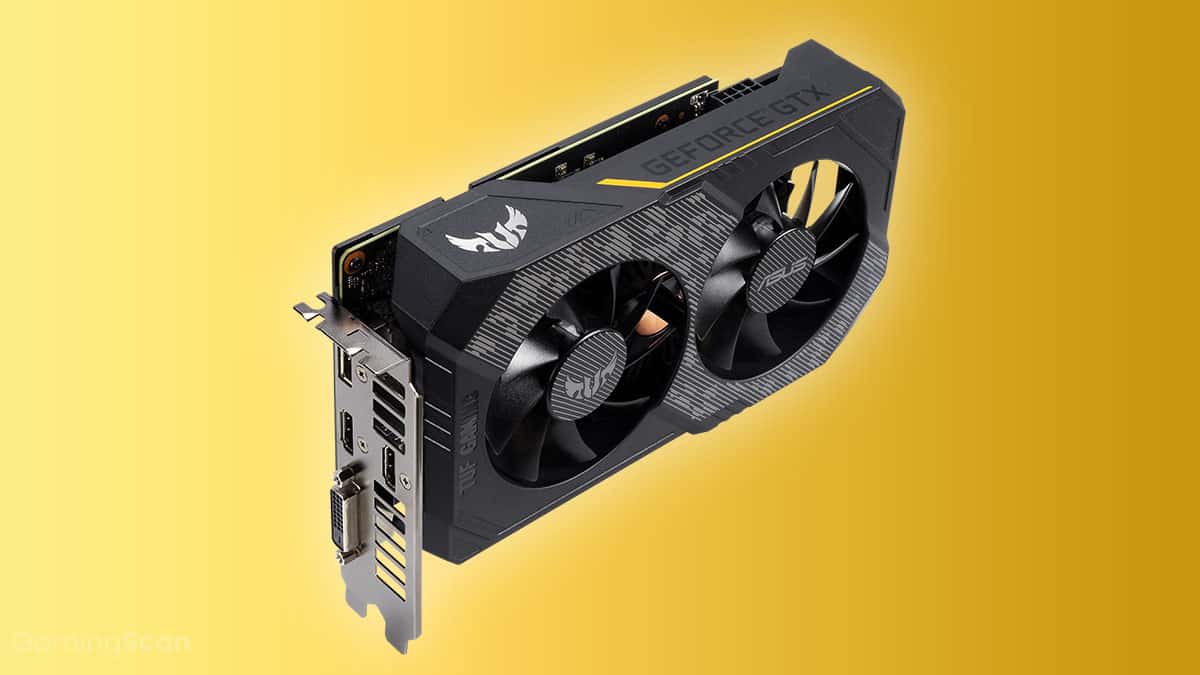 The Nvidia GeForce GTX 1660 Ti is out, and it is hands-down the best mid-range GPU currently available: it can reach high framerates in 1080p and can handle even 2160p, all the while being the definite mid-range king regarding 1440p gaming.

But of course, not all 1660 Ti models are created equal, as they differ in terms of performance, value, or just the aesthetics. 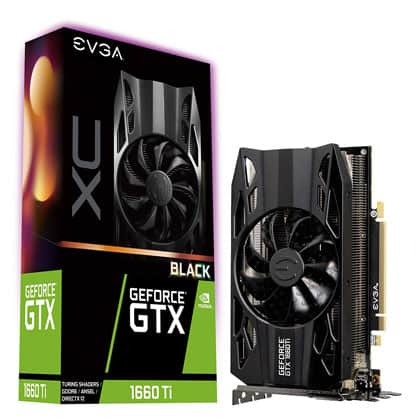 The first card on this list is a more affordable solution coming from EVGA, and it’s their GTX 1660 Ti XC Black Gaming model. Aesthetics-wise, it looks similar to what we’re used to seeing with EVGA, sporting a simple matte black shroud and some minor details that help give it a bit of identity.

Furthermore, as can be seen from the picture, this is a compact single-fan card, which can be both a good and a bad thing.

Now, this graphics card may be compact, but it is still a powerful upper mid-range solution. That said, though the card may be short and though it may rely on a single fan, it boats a thick aluminum heatsink that helps with the cooling efficiency.

As mentioned above, a single-fan card can be both a good and a bad thing. On the one hand, the card is more compact, so it will be able to fit inside smaller cases more easily. However, since it is cooled by a single fan, it means that the fan will have to spin faster to keep the temperatures low, so it will be both louder and less efficient.

That said, the EVGA GeForce GTX 1660 Ti XC Black Gaming would be a great pick for those who intend on building a compact form-factor gaming PC, those who want to use it with an external GPU case, or just those who are on a tight budget and are looking for the cheapest 1660 Ti available. For anyone else, some of the other models listed here would provide better value. 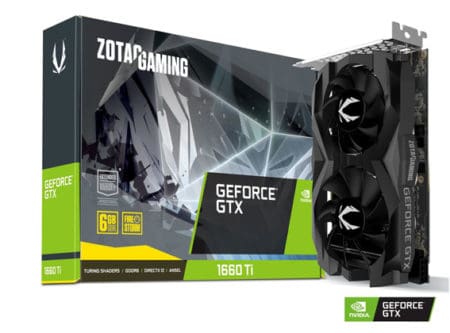 Next, we have a similar card from Zotac, the ZOTAC Gaming GeForce GTX 1660 Ti. This is another compact budget card that boasts a simple matte black shroud, though the key difference with the Zotac model is that it is actually a dual-fan card, despite the compact form-factor.

When it comes to this Zotac GTX 1660 Ti, it’s pretty much the same deal as with the EVGA GTX 1660 Ti XC Black Gaming i.e., it is a compact and affordable card that will be a good match for anyone looking to build a small form-factor gaming PC.

The key differences lie in the fact that it is a dual-fan card, so it is a bit quieter than the single-fan EVGA model, plus it has three DisplayPorts as opposed to the one. However, it actually doesn’t fare as well when it comes to overclocking, so it most certainly isn’t a performance-oriented card.

Ultimately, the Zotac Gaming GTX 1660 Ti is a good pick for those who are on a budget and are looking for the most compact card that they can get. Furthermore, though the EVGA model does offer better performance, the Zotac has 3 DisplayPorts, which might make it the better pick if you intend on hooking the card up to multiple displays. 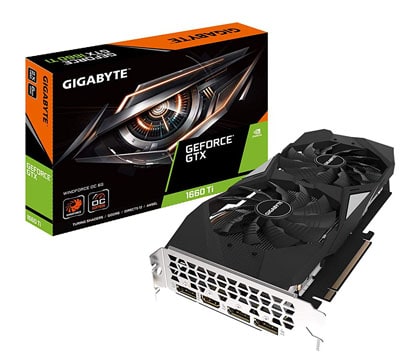 Moving on, we have Gigabyte, another recognizable and reliable name. Their GTX 1660 Ti Windforce OC that we will be taking a look at here features a clean and relatively minimalistic design, with none of the signature orange highlights that marked Gigabyte’s older graphics cards.

It is also a dual-fan card, so the performance is a bit better than the single-fan EVGA model.

First, we have to point out that the Gigabyte GeForce GTX 1660 Ti Windforce OC really looks quite good. Not only does it sport a fairly clean and modest black shroud, but it also comes with a backplate, something that definitely makes the card come across as a more premium-quality product at first glance.

However, upon closer inspection, it’s quite obvious that Gigabyte cut some corners with the design, as both the shroud and the backplate are made of somewhat cheap-feeling plastic.

There is not much to say about the performance, as the card can hit solid clock speeds, and the dual Windforce fans are highly efficient and relatively quiet, though they too can be on the loud side when under heavy load.

Ultimately, this Windforce model is also something of a budget pick, as it is a bit more affordable than most other 1660 Ti models. Still, it fares better when it comes to the performance and noise generation than the above EVGA card. 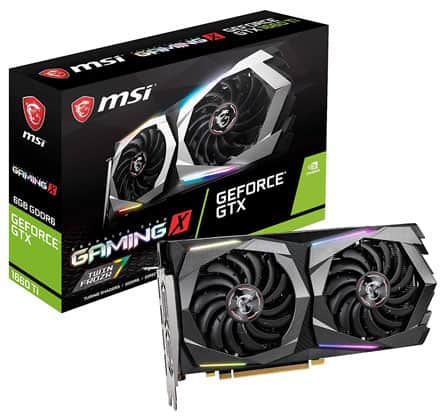 About The Graphics card

Next up, we have something a bit more serious, and it’s MSI’s take on the GTX 1660 Ti: the MSI Gaming GeForce GTX 1660 Ti. One look at this card, and it comes across as much more impressive than the above Gigabyte model, with its detailed shroud, metal backplate, and RGB lighting.

Of course, the dual TORX 3.0 fans don’t disappoint either, making this one of the better GTX 1660 Ti models available.

As mentioned above, the MSI Gaming GeForce GTX 1660 Ti is a great-looking card. It sports a dark gray, heavily detailed plastic shroud with four RGB strips, and the brushed metal backplate makes it feel like a premium-quality product.

On the performance front, there is nothing overly surprising. The GPU can reach considerable clock speeds and easily go over 2000 MHz, allowing the user to squeeze a couple more FPS out of it. Meanwhile, the fans are also fairly quiet, even when under load.

Overall, this card is our top pick for now, as it offers not only good performance but also highly appealing exterior design, complete with RGB lighting. Plus, it’s not overly expensive either, and most people who are thinking about getting a 1660 Ti should be able to afford it, though it is a bit on the pricey side. 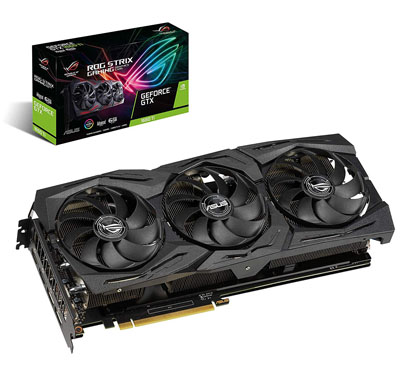 Of course, how could we talk about graphics cards without mentioning a product from Asus’ Strix series. This time, it’s the Asus RoG Strix GTX 1660 Ti.

Now, the design hasn’t changed much since the previous generation of graphics cards, so it’s pretty much what you’d expect: a matte black shroud with plenty of angular details, RGB lighting, and a metal backplate. Furthermore, the card uses triple-fan cooling, so it’s capable of hitting slightly higher clock speeds.

As stated above, the design didn’t change much. The six RGB strips go well with the angular design, and while many a gamer will be content with this approach, the card’s main appeal does not lie in the aesthetics.

Rather, it being a triple-fan card, it’s obvious that those who will invest some extra money in a card like this are those who are looking for a more advanced cooling solution that can help push the GPU to its limits. Just like the above MSI model, this Strix card can easily go over 2000 MHz, and if you’re not putting those three fans to work, then it is remarkably quiet.

In the end, since it utilizes a more advanced cooling solution, it’s obvious that the RoG Strix GTX 1660 Ti costs a bit more than the average GTX 1660 Ti. While it’s not a significant increase in price, it does make it a stone’s throw away from some cheaper RTX 2060 models, rendering the value of this card a bit dubious.

When it comes to deciding on which of these cards would suit your needs best, here’s what you need to consider!

As already mentioned in the article, smaller cards are ideal for Mini ITX and some Micro ATX cases, seeing as larger cards may not fit them at all, especially when it comes to the former. Of course, the actual performance is unaffected, seeing as it is still the same GPU that has the same amount of VRAM, so the only thing that is different based on size is the cooling.

Graphics cards can utilize several types of cooling, the most popular being open-air cooling, though liquid-cooled and blower-cooled cards exist as well, albeit no such models are listed in this article.

Now, when it comes to open-air cooling, it is characterized by an open heatsink and one, two, or three fans that disperse the heat. As we’ve already stated, a single-fan card has the advantage of being more compact. I

n contrast, a triple-fan card is larger but allows for better overclocking and quieter operation. Lastly, most common dual-fan coolers are a good balance between size, cooling efficiency, and noise generation.

So, which should you choose?

Dual-fan cards will be the best fit for most people, as they can usually fit inside Micro ATX cases, and they are the most balanced way to go, as stated above.

And finally, triple-fan cards will catch the attention of those who are looking to get as much performance as they can out of the GPU, though, as mentioned in the overview of the Strix GTX 1660 Ti, triple-fan coolers tend to inflate the price a bit.

That said, you should be able to decide which solution would suit your needs best, though we’d say most people will find a dual-fan card to be the most appealing.

With the above in mind, it should be fairly obvious that our top pick would be the MSI Gaming GeForce GTX 1660 Ti. It looks good, boasts a high-quality build, comes complete with RGB lighting, and offers good performance as well – and all of that for a reasonable price.

In any case, each GTX 1660 Ti is a GTX 1660 Ti, so the raw performance doesn’t differ drastically from model to model, though of course, you can always squeeze some extra performance out of it via overclocking, which is the main appeal behind cards such as the Asus RoG Strix GTX 1660 Ti.

Ultimately, every model has its own merits and shortcomings, so any of them can be a good choice based on your personal requirements and preferences. 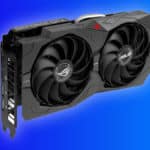