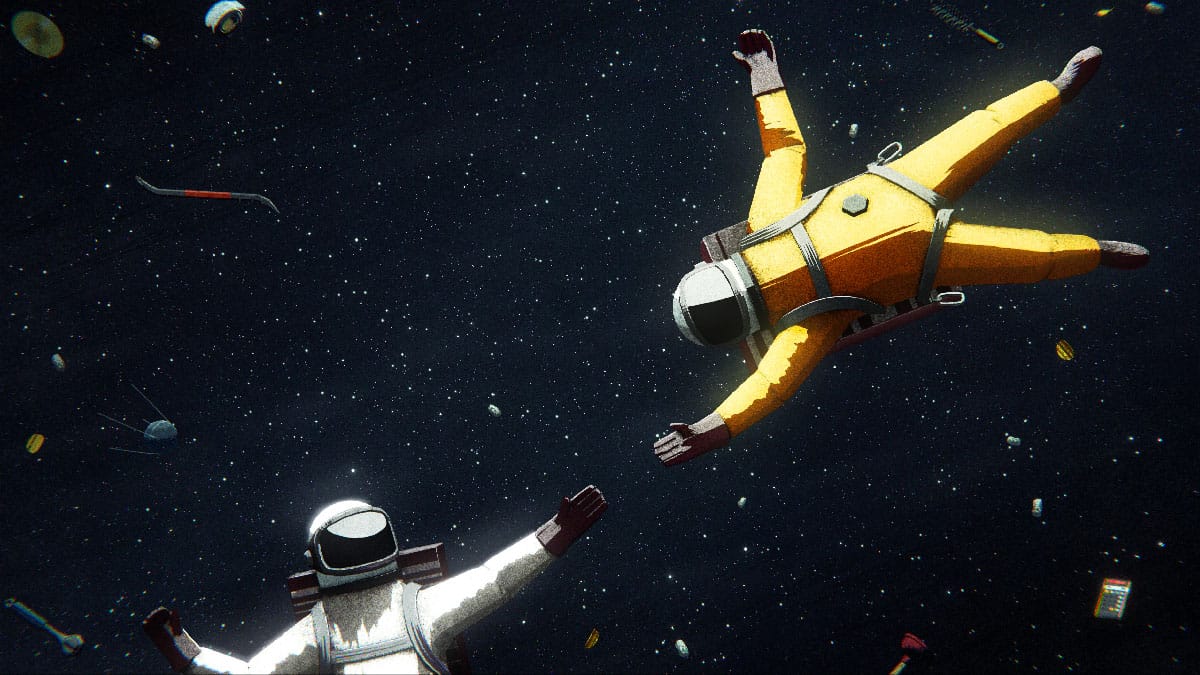 While the glory days of couch co-op and split-screen gaming have long passed, you can still find a handful that support local multiplayer.

These are typically more casual, family friendly titles such as Lego games or co-op-driven games like It Takes Two and Overcooked.

To help you narrow down your options, we’re highlighting the best couch co-op games to play in 2023, including local co-op games for PC and console.

We’ll be updating this list in the future with new titles, so make sure to check back and let us know if we missed any of your favorite couch co-op games!

Heavenly Bodies is a space-physics sim that focuses on replicating realistic movement while floating in zero gravity.

Designed with couch co-op in mind, it sees players working together to control 1970s-era cosmonauts as they navigate space stations and carry out various tasks.

The way the game handles physics can be frustrating at times but there is an assist mode that reduces the level of realism for a more casual experience.

Woodle Tree 2: Deluxe Plus is an expanded sequel to the original Woodle Tree and draws inspiration from classic Nintendo 3D platformers.

In it, you take on the role of a pudgy hero named Woodle as he sets out to save the Wood Lands from a corrupt black substance that’s absorbing all life.

Deluxe Plus introduces a host of fun new features such as new level challenges, abilities, characters, puzzles, and local co-op support for up to 4 players.

Developer Hazelight Studios has a knack for pushing the envelope for modern couch co-op games like It Takes Two.

In it, players take control over an unhappily married couple who find themselves trapped in their daughter’s hand-made dolls after announcing their divorce.

The pair are then forced to embark on a fantastical journey spanning genre-bending platforming levels that offer unique challenges and loads of mini-games.

Like many couch co-op games, It Takes Two can be played via split-screen on PC and console, with only one person required to own a copy of the game.

LittleBigPlanet has always been a good pick for some wholesome platforming fun that supports local couch co-op.

The PS5 gets a worthy successor in the form of Sackboy: A Big Adventure, which sees the series’ mascot embarking on an adventure to save Craftworld from the villainous Vex.

Players are given more customization options than ever before, and the switch from 2.5D to full-on 3D platforming creates room for new abilities, mechanics, and level designs to emerge.

The best part is the entire story can be beaten in local co-op with up to four players as well as online, or with a mix of the two, with some challenges requiring a certain number of players.

Biped is a couch co-op platformer where two players work together to guide a pair of small adorable robots that can only move one leg at a time.

Those who crave an added challenge can seek out optional coins throughout levels and use them to unlock new hats for your robot buddies.

The game has a lighthearted tone that’s further complemented by laidback gameplay that encourages communication and teamwork.

Minecraft Dungeons does a great job at paying homage to the classic dungeon crawler RPGs like Diablo and Torchlight.

In it, you’re tasked with defeating the nefarious Arch-Illager after he begins corrupting the Minecraft world and spawning evil mobs of enemies.

The game offers hundreds of artifacts, gear, and enchantments to collect and use in battle to perform devastating special attacks as well as buff and heal allies.

Furthermore, Minecraft Dungeons can be played via both local and online co-op with up to four players and features multiple difficulty options with scaling rewards.

KeyWe is a couch co-op puzzle management game about a pair of Kiwi birds named Jeff and Debra that work inside a whimsical post office.

Tasks are completed by using jumping, flapping, pecking, and butt-slamming your way around uniquely designed levels filled with all sorts of interactive levers, bells, and buttons.

Phogs is a couch co-op puzzle-platformer that sees you and a partner controlling an adorable pair of dogs who share the same body.

In order to clear platforming challenges and solve puzzles, the two of you have to communicate in addition to barking, biting, and bouncing your way through levels.

The game has a lighthearted and cheery vibe that gets mirrored through its themed-worlds belonging to Food, Sleep, and Play.

There are over 24 levels to complete and hidden Golden Bones you can collect to unlock new hats for you and your partner’s dogs to wear.

Nintendo’s been spending a lot of time porting Wii U and 3DS games over to the Switch, and their latest effort is Super Mario 3D World + Bowser’s Fury.

The original Wii U title saw Mario and friends attempting to rescue cute fairy-like creatures from the clutches of Bowser after he invades the Sprixie Kingdom.

Gameplay is similar to previous Super Mario games with the addition of a character selector and the new Super Bell power-up, which turns the player into a cat that can climb on walls and scratch enemies.

The Switch version includes the base game and a new standalone story in which Mario and Bowser Jr. team up to defeat Fury Bowser and save Lake Lapcat.

Spiritfarer is a cozy indie game with management sim gameplay akin to Animal Crossing that includes local split-screen multiplayer for up to two players.

Both characters control similarly and move throughout the ship independently in order to cook passengers’ meals, complete tasks, and help NPCs along the way.

Despite the game’s grim premise, it manages to cover a wide range of emotions throughout the many anthropomorphic animals that join your crew.

Other than spawning some of the best fowl-related memes to date, Untitled Goose Game offers a humorous, albeit simplified stealth experience centered on unruly geese.

In it, you and a friend control maniacal fowls whose sole purpose is to annoy their fellow man in just about every imaginable way.

Sandbox environments are packed with random items that can be interacted with in unique ways, mainly to upset any nearby humans.

While it may not have the most extensive or robust stealth-based gameplay, it’s good for a few laughs with friends or family.

Overcooked! All You Can Eat

Overcooked! All You Can Eat bundles the first two games in the series with new content that has been remastered for PC and the latest consoles.

Presented as a competitive co-op cooking game, it sees up to four players collaborating to prepare and cook food orders in unconventional kitchen setups.

Levels feature different workstations designated for everyday cooking tasks like chopping, frying, and plating, along with obstacles and hazards to consider.

One might see you hurling onions at a teammate from across a moving truck, while another has you dodging attacks from kitchen ghosts.

Cuphead is modeled after challenging run-and-gun games, back when memorizing enemy attacks was less of a strategy and more of a necessity for survival.

This action-platformer does a great job of luring you into a false sense of security with joyfully hand-drawn cartoon visuals before revealing its true sadistic nature.

In it, you and a friend take on the roles of Cuphead and his brother Mugman as they complete a series of boss rushes and platforming levels to repay their debt with the devil.

These lengthy battles will put your platforming skills through the wringer, complete with shifting background environments and increasingly hostile enemy attacks.

Considering games like A Way Out are becoming much rarer with each passing year, we’re grateful that Hazelight Studios managed to fully realize their vision.

The game is built from the ground up with co-op in mind and tells an engaging story about two buddy criminals who escape prison and have to evade the law.

Vincent and Leo are well-written characters with unique motivations and traits that both help and hinder their plans as well as cause drama and arguments between the two.

You and your friend are likely to do the same since many obstacles demand communication and good timing to be successful.

Lovers in a Dangerous Spacetime is a couch co-op shooter that sees up to four friends working together to manage a spaceship and eliminate enemies while traveling through space.

Here’s how it works: there are numerous stations throughout the ship dedicated to specific tasks like piloting, firing cannons, activating shields, and so on.

However, each player can only operate one station at a time, requiring you and your teammates to coordinate who’s doing what at any given time.

The game has a fun and upbeat vibe that’s further complemented by colorful 2D visuals and satisfyingly chaotic gameplay.

Unravel 2 is a co-op platforming adventure experienced from the perspective of two Yarnys (small living beings made of yarn) controlled by you and another player.

The Yarnys share a connecting thread that allows them to run, jump and swing to solve puzzles and traverse tricky environments filled with dangerous animals, sharp objects, and brutal weather.

The contrast between the Yarnys themselves and the massive world they inhabit make Unravel Two a delightful co-op adventure that will leave a lasting impression on you and your partner. 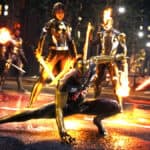