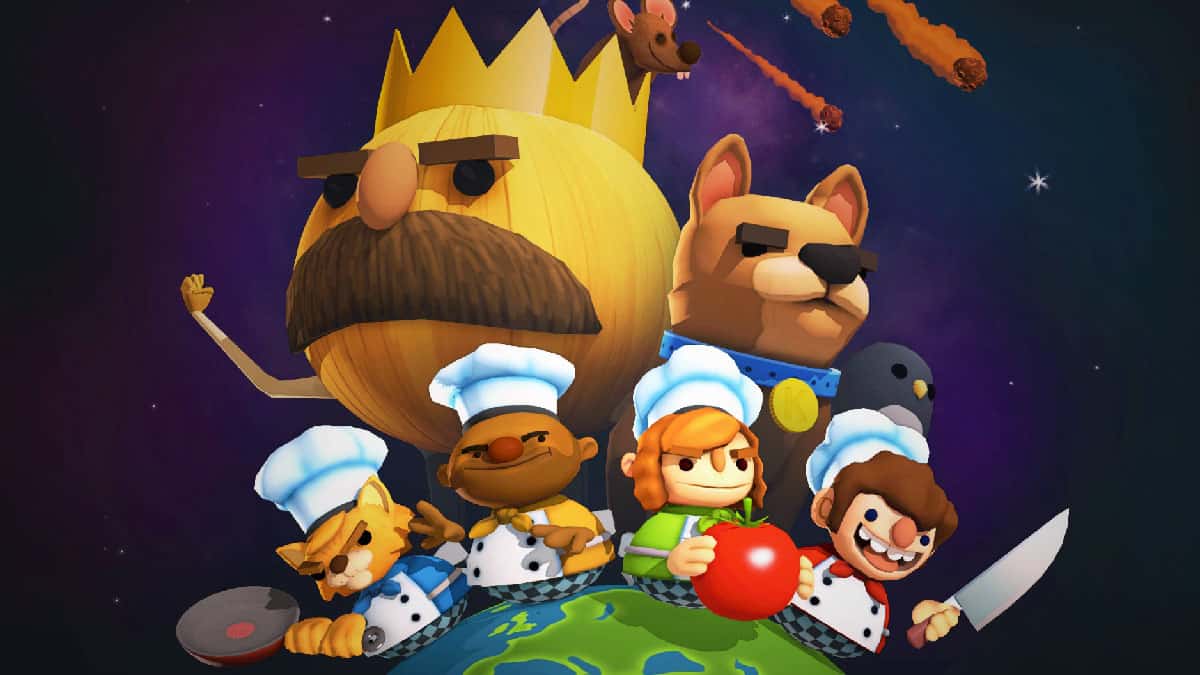 If you’re on the hunt for more fun games like Overcooked to play with friends, we’ve got you covered.

In this list, we’ll highlight the best games like Overcooked on Steam, PlayStation, Xbox, and Nintendo Switch.

This includes the best couch co-op games and best online co-op games like Overcooked that will have you and your friends raging while working together.

Now that we’ve set the stage, let’s jump right into our picks for games similar to Overcooked!

First up is Bone’s Cafe, a fast-paced couch co-op cooking game like Overcooked that sees up to 4 players joining up to run a kitchen.

Assuming control of skeletons, you’ll customize the layout of your kitchen, create a menu, and cook delicious dishes with perfection.

Where the game stands apart from Overcooked is the ability to automate menial tasks by hiring minions, easing your workload to focus on the management side of things.

This includes exploring new recipes and ingredients to give your menu an edge and stand out from the competition.

Next, we suggest playing Ship of Fools, a rogue-lite co-op game where players work together to navigate treacherous seas aboard a ship called The Stormstrider.

To keep your vessel in tip-top shape, you and a companion will have to man the cannons, ready sails, and defend it from dangerous sea monsters.

Ship of Fools’ combat is frantic and sees both players chaining together combos with an assortment of special abilities.

Additionally, the Stormstrider ship can be upgraded over the course of multiple runs to increase its defenses and survivability as you uncover more of the world.

Designed for 2-4 players, Trash Patrol is a local co-op multiplayer game that casts you and your friends as raccoons looking for something to steal.

In it, you’ll break into unsuspecting humans’ homes, steal items, wash them clean, and toss them into a trashcan to be teleported safely.

Along the way, you’ll have to keep an eye out for homeowners who aren’t too fond of raccoons breaking into their homes and will try to bonk you on the head.

The game was created by a group of game design students and can be downloaded for free on Steam.

Moving along, Witchtastic is a challenging 2-4 player coop game like Overcooked that revolves around brewing and delivering magical potions.

The goal of the game is to churn out concoctions as quickly as possible while riding your broomstick to avoid enemy wolves and ghosts.

Your journey will take you through an assortment of environments including spooky villages, forests, swamps, cities, and snowy regions.

For all your hard work, you’ll earn rewards that can be used to customize your witch’s appearance.

Reminiscent of Overcooked, PlateUp is a management sim roguelite that sees you building a culinary kingdom.

In it, you take on the role of chef, server, and decorator tasked with turning procedurally-generated restaurants into the talk of the town.

This is done by churning out dishes quickly without sacrificing quality or your restaurant’s reputation by keeping up with trends and constantly iterating.

The game allows you to do all this yourself or employ a friend or two to join your venture and help expedite orders and lend a hand in the kitchen.

If you’ve ever wondered how pulling off a heist in Overcooked would work out, Rubber Bandits is the answer.

Billed as a part-heist part-brawler party game, it sees a group of thieves working together to pull off their biggest score yet.

In fact, the game encourages you to pummel your friends using wonky physics-based attacks, weapons, and gags across various levels and modes.

Spacelines from the Far Out is a co-op management game about running your own intergalactic airports.

In it, players are tasked with getting passengers to their destinations safely by picking the best in-flight amenities and routes while navigating tricky obstacles.

Raiders Of The Lost Island

If you enjoy helping your friends one minute only to backstab them the next in Overcooked, then Raiders Of The Lost Island may be the perfect game for you.

In it, up to 4 players are dropped on a mysterious island where they’ll have to build an escape boat by finding missing pieces before the rising tide drowns them all.

At the same time, everyone is competing to horde the most treasure for themselves, so expect plenty of backstabbing.

There are several ways to take things depending on how evil you’re feeling but as long as one player makes it out alive, you’ll go home with some treasure.

This results in a mad dash to find suitable parking spots before the clock runs out and you and your buddies lose your jobs.

The game encourages you to work together by hitching rides and causing chaos to help steer your fellow valets in the right direction.

Outside of its co-op missions, Very Very Valet offers an assortment of mini-games where players can face off in ridiculous driving challenges.

Next up, Heavenly Bodies is a space-physics sim that focuses on replicating realistic movement while floating in zero gravity.

Designed with couch co-op in mind, it sees players working together to control 1970s-era cosmonauts as they navigate space stations and carry out various tasks.

The way the game handles physics can be frustrating at times but there is an assist mode that reduces the level of realism for a more casual experience.

KeyWe is a co-op puzzle management game about a pair of Kiwi birds named Jeff and Debra that work inside a whimsical post office.

Tasks are completed by jumping, flapping, pecking, and butt-slamming your way around unique levels filled with all sorts of interactive levers, bells, and buttons.

Together, you’ll open up an alchemy shop and get to work growing and combining exotic fruits, powders, and herbs into magical elixirs for picky customers.

At the end of the day, you’ll receive a chunk of gold for all your effort that can be used to unlock new characters with special traits to take your shop to the next level.

However, you’ll also have to keep an eye out for dangerous jelly monsters and thieving crooks who will try to steal your powerful concoctions.

Cook, Serve, Delicious is a popular cooking game series that sees you taking your culinary skills on the road in a food truck competition.

Along the way, you’ll get to prepare hundreds of different food creations with the help of two charismatic robot crewmates.

Additionally, you’ll obtain new game-changing upgrades and fancy trinkets you can use to decorate your food truck.

Cook, Serve, Delicious 3 features 380+ levels for around 20 bucks or less if you catch it on sale, making it a tremendous value for Overcooked fans.

If you and your friends have mastered the art of cooperative cooking, it might be time to move on to a new field, such as the exciting world of home renovation.

Tools Up has up to 4 players taking on repair projects in trap-filled apartments and homes where coordination and time management are crucial for success.

Together, you’ll paint walls, lay tiles, move furniture, and try not to wreck the place too badly in order to get a good rating and unlock new levels.

Like Overcooked, Tools Up! features a variety of playable characters, colorful and cartoony graphics, and some wonky physics to keep you on your toes.

Moving Out is another chaotic co-op party game in the same vein as Overcooked that uses a moving company as its premise for gameplay.

In it, 1-4 players are tasked with moving people’s personal belongings from their old homes to their new ones while causing as little damage as possible.

This is typically easier said than done since each level introduces its own set of challenges, hazards, and opportunities to help or sabotage your fellow movers.

One of the biggest obstacles you’ll run into early on is Moving Out’s ridiculous physics, which requires you and a partner to coordinate to move heavier items.

Lovers in a Dangerous Spacetime is a couch co-op shooter that sees 1-4 friends managing a spaceship and eliminating enemies while traveling through space.

Here’s how it works: there are numerous stations throughout the ship dedicated to specific tasks like piloting, firing cannons, activating shields, and so on.

However, each player can only operate one station at a time, requiring you and your teammates to coordinate who’s doing what at any given time.

The game has a fun and upbeat vibe that’s further complemented by colorful 2D visuals and satisfyingly chaotic gameplay.

If you’ve grown tired of Overcooked’s random and over-the-top themed levels, why not take the show on the road…the railroad that is.

Unrailed is a co-op multiplayer game that sees your crew laying down train track pieces across an endless, procedurally generated world going from station to station.

Along the way, you’ll have random encounters with wildlife, enemies, and other hazards that could potentially derail your train and send you back to the menu.

This is where upgrades come into play, allowing you to prepare for challenges ahead by improving your locomotive’s engine, wagon, and other equipment. 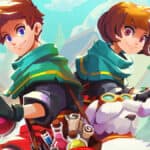