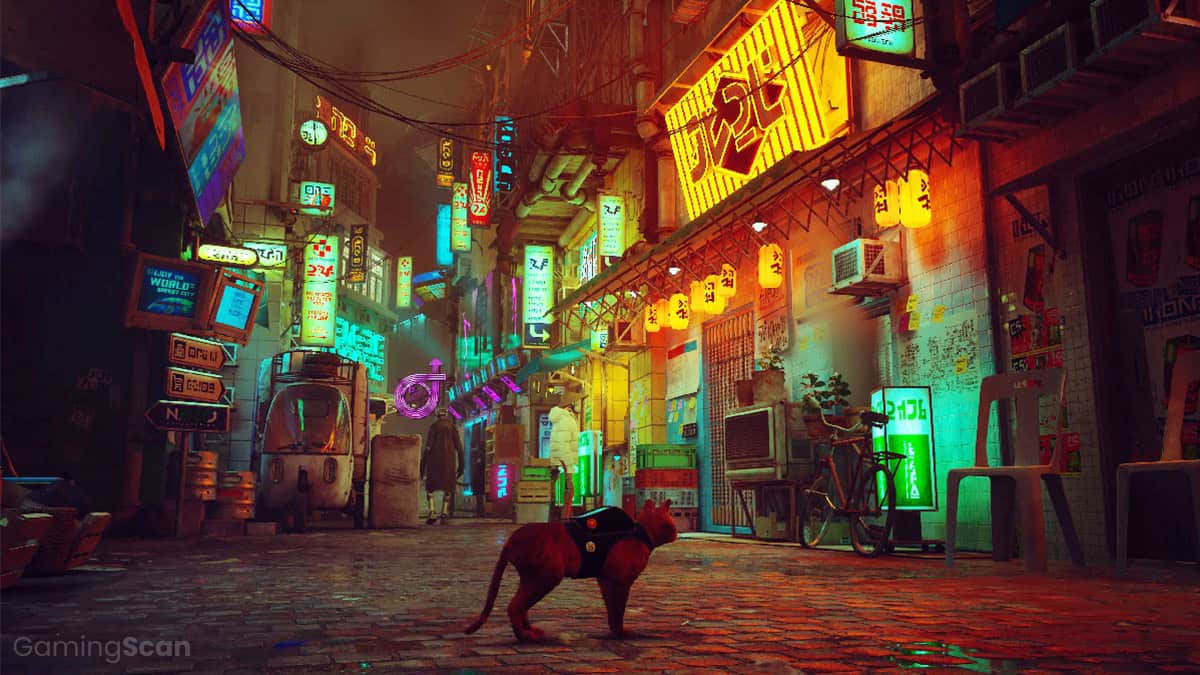 Modern exploration games are much more flexible and open-ended when compared to previous generations where hardware limitations were a lot more rigid.

This has led to increased diversity in open-world games and adventure games where exploration is not only rewarded but also treated as a core mechanic for progressing.

In this list, we’ll shine a light on the best exploration games on PC that foster curiosity and encourage you to get out and see what the world has to offer.

For more gaming recommendations, consider browsing through our other curated lists and leaving a comment if we forgot to include your favorite game to get lost in!

If you’ve ever wondered what it would be like to explore the world as a cat, Stray gives you the option to do so while also taking place in a neon-drenched cyberpunk world.

Following our adorable feline protagonist, players are tasked with traversing a mysterious city where humans have been replaced by robots.

While the game is fairly linear, it provides several opportunities to explore environments from a fresh perspective that allows you to climb and squeeze through areas you normally can’t in a video game.

Created by James Bendon, Dinkum is an indie adventure game that sees you ditching your boring city life in favor of the adventurous Australian outback.

Reminiscent of games like Animal Crossing and Stardew Valley, it focuses on building a town, managing a farm, getting to know your neighbors, and exploring the world around you.

To this point, the game features an array of visually-striking environments ranging from tropical forests to scorching deserts, damp caves, and more.

Core Keeper is another indie title that takes its cues from games like Stardew Valley while placing a bigger emphasis on co-op gameplay.

This makes it a great choice for anyone that wants to bring along a friend or two before setting off for new adventures in sprawling caverns ripe with secrets.

Together, you’ll build a base, gather materials, and craft tools that allow you to venture further into the caves to find treasures, bosses, and shortcuts.

Speaking of co-op exploration games, Deep Rock Galactic is a first-person shooter that casts 1-4 players as foul-mouthed dwarves on a mission to recover precious ores and minerals from hazardous caves.

To keep things interesting, the game uses procedural generation to determine the size and layout of each cave system along with distinct visual and gameplay elements depending on the biome.

Teams that carefully explore and navigate their surroundings are rewarded with materials to reach their quota, earn in-game bonuses, and unlock new gear and upgrades for their miner.

While fairly linear in its storytelling, God of War offers plenty of opportunities to take a break from the main quest and explore the world organically.

This becomes possible once players have reached the Lake of Nine, which serves as both a hub area and portal to other realms that offer unique challenges, boss encounters, rewards, and visual design.

Even after you’ve finished working your way through the story, you’ll find there are still a ton of optional bosses, combat challenges, and chests to track down.

Exo One is a space flight exploration game that sees you commanding an alien craft across beautiful landscapes filled with both serene and hostile weather effects.

The game features a unique traversal system that allows you to change the shape of your vessel to manipulate gravity in order to roll, jump, and glide in the air.

What makes Exo One so great for exploration is the raw nature of its environments, with each setting presenting distinct challenges based on the severity of its climate.

In it, up to 4 players can work together to explore and reshape distant worlds using a terrain modifier tool and countless pieces of craftable equipment, vehicles, and workstations.

Doing so allows you to venture further from your base to investigate caves, forests, and eventually other planets housing more secrets to discover.

Grounded is another sandbox survival game that rewards you for scouring every nook and cranny of its world with useful materials for crafting better tools, gear, and furniture.

However, there’s one thing to keep in mind before heading into the backyard: threats come in many shapes and sizes, including giant spiders that aren’t too fond of your presence.

With that said, the game offers an abundance of cool discoveries in the form of new crafting materials, secret areas, and traversal options for those brave enough to explore.

Inspired by The Legend of Zelda, Tunic is an action-adventure game that casts you as a little sword-wielding fox on a big adventure.

The game takes place on a mysterious island teeming with secrets and challenging encounters that can require both finesse and a bit of patience.

Thankfully, these parts can be scaled back using optional modifiers to swing the odds in your favor and let you get back to focusing on uncovering parts of the map and other mysteries.

Next up, Valheim bills itself as a brutal exploration and survival game where up to 10 players can band together and brave a procedurally-generated purgatory inspired by Viking culture.

Since each world is extremely vast and wholly unique to each player, you’ll find no two playthroughs are quite the same as resources, enemies, and rewards can appear in different areas.

Only by battling, building, and surviving can players conquer Valheim’s world, defeat its many bosses, and ultimately earn Odin’s respect.

It may seem out of place to include a racing title on a list of exploration-focused games but hear us out for a second.

In Forza Horizon 5, the environments you traverse are equally as important as the cars themselves and can present interesting challenges and sights that enhance the gameplay experience.

What’s more, the game’s Mexico setting is explored in great detail with a lot of landscape variety ranging from deserts to jungles, cities to ruins, beaches, canyons, and even a snow-capped volcano.

Metroidvanias like Hollow Knight have always excelled at making exploration fun by turning their world maps into puzzle pieces that fall into place the further you progress.

While Hollow Knight may be on the more difficult end of the spectrum, overcoming its many challenges is worth it for the sense of accomplishment and opportunity to see every inch of Hallownest.

Exploration is at the core of Outer Wilds’ gameplay and without it, the game would be a lot less exciting and unpredictable.

From the start, your character can go to any planet in any order and start chipping away at puzzles without any previous knowledge.

Of course, some routes are more optimal than others but at the end of the day, exploration games are about discovering things naturally using your own intuition.

If you thought we were done with space exploration games, you’re sorely mistaken as this specific genre has a lot of potential for keeping players engaged.

After all, games like No Man’s Sky present you with entire galaxies with diverse planets to visit, catalog, and build bases on if you so please.

The game has come a long way since its controversial launch and only seems to get bigger and better with each update as new systems, spacecraft, and activities are added.

Subnautica is a survival crafting game that uses exploration as one of its defining mechanics, with any semblance of progression directly tied to how much the player has seen firsthand.

Below Zero expands upon this concept by allowing players to climb to the surface where more secrets and discoveries await.

As you gather more materials, new craftable items will appear in your workbench that let you expand your base, dive deeper, defend yourself, and improve your quality of life.

The Forest is another survival game that relies on exploration to tell its story and introduce new gameplay elements that become central to the experience.

In it, you take on the role of a lone survivor of a plane crash who must fight for survival in a mysterious forest shared with cannibalistic mutants.

Like many games on this list, The Forest rewards curiosity with useful rewards that come in handy with staying alive and fleshing out the game’s world and narrative.

FromSoftware games always put exploration at the core of their gameplay, with many bosses and rewards requiring you to venture off the beaten path to find them.

Elden Ring continues this trend while presenting Souls players with the biggest open-world map yet, one which can be unmasked in any order.

Like several games on this list, Elden Ring’s world is completely accessible from the start, though if you don’t want to instantly die, we suggest avoiding certain parts until you’ve leveled up a bit.

GTA games have always been great for exploration as each city functions as a living sandbox where players can commit crimes, spend money, and build an empire.

Grand Theft Auto V is the most ambitious take on the series’ formula yet and presents a sprawling open world that’s yours for the taking.

From gambling to street racing, walks on the beach, or stealing a helicopter, every inch of the map is filled with at least one activity, vehicle, or mystery to explore.

The other feather in Rockstar’s cap, Red Dead Redemption 2’s map is just as vast and fun to explore as GTA 5’s while featuring more naturalistic and rustic environments.

While the story is very action-focused and keeps things moving at a brisk pace, you’re always free to take a break and set off for the woods or mountains to soak up some scenery, hunt, or go horse-riding.

The game reinforces the notion of living life at a slower pace by implementing long and drawn animations for relatively simple tasks like dismounting your horse or skinning an animal.

Although not an open-world game in the traditional sense, Monster Hunter: World features large open environments that reward inquisitive players.

This can range from discovering a new harvesting site for gathering various bugs, fungi, and other consumables, as well as monster resting areas and hunter camps.

Furthermore, knowing the ins and outs of every locale can prove fruitful during hunts when players need to take a breather, monitor other monsters in the area, and restock on supplies. 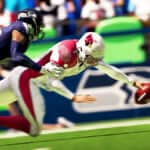