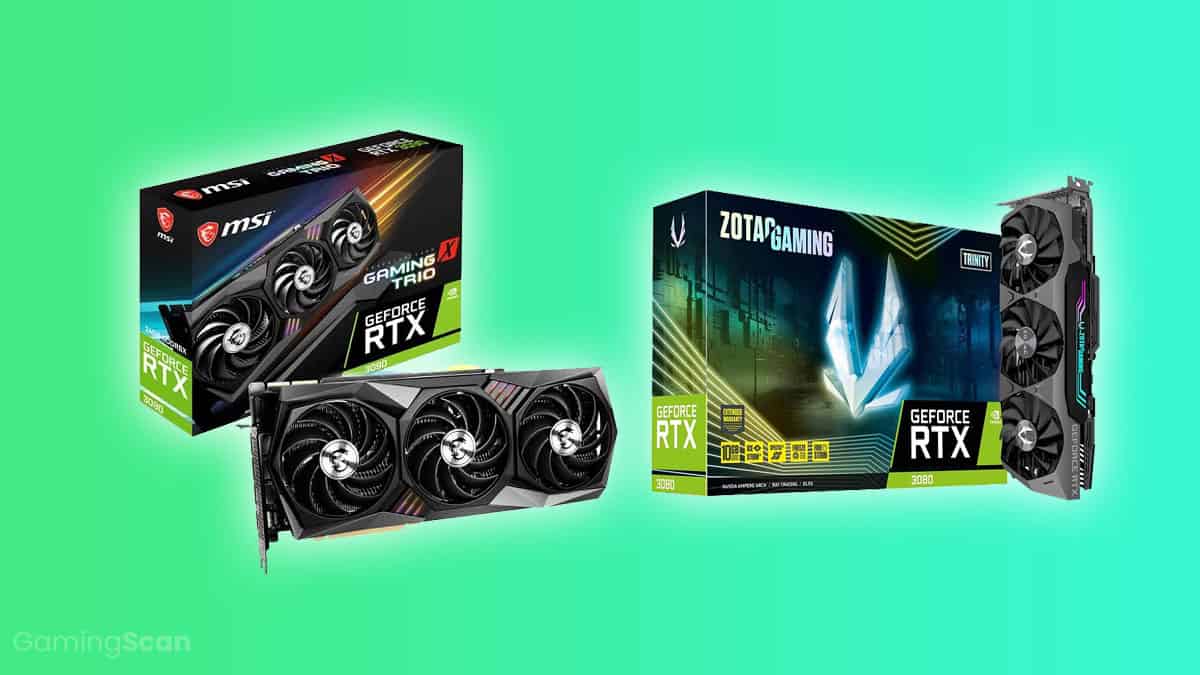 It feels as if it were only yesterday that the RTX 2080 Ti was the most powerful and most expensive consumer GPU available on the market. Yet, it didn’t take long for a new ultimate GPU to dethrone it, offering better performance and efficiency.

We are, of course, talking about the Nvidia GeForce RTX 3090, the $1500 behemoth of a GPU with capabilities that make it more appealing as a workstation GPU rather than a gaming one.

Regardless of why you’re thinking of getting it, there are still a number of models to choose from, as always. So, we’ve put together this buying guide to give you an overview of the best RTX 3090 graphics cards available at the moment in order to help you find the best one for your needs! 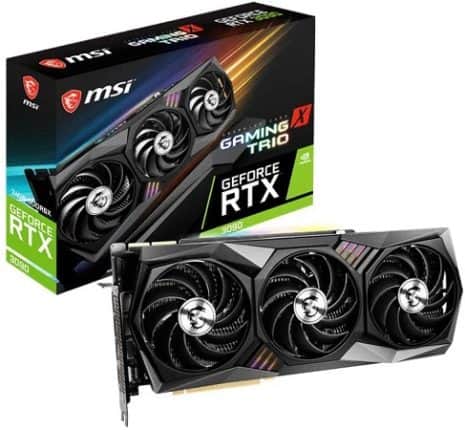 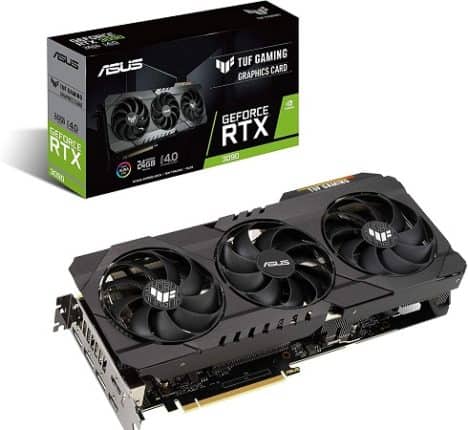 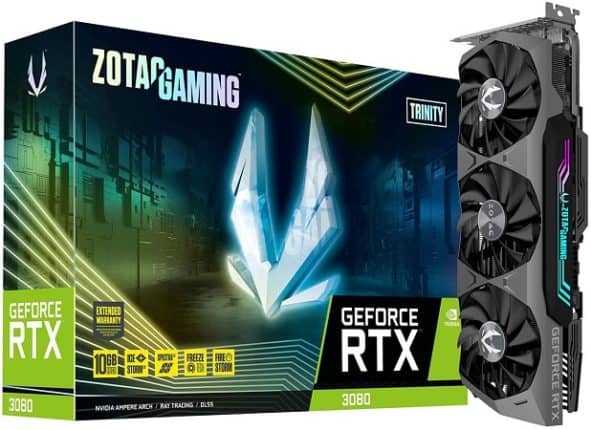 For the first entry on this list, we have the Zotac RTX 3090 Trinity. This card is brought to you by one of the youngest graphics card manufacturers on the market, but one that has nonetheless come to count among the more recognizable names in the world of graphics cards.

One of the things that Zotac is known for is its compact graphics cards that make excellent picks for small form factor cases and external GPU enclosures. And although the RTX 3090 is anything but “mini”, it is still more compact than the Founders Edition RTX 3090, as it boasts a standard 2.5-slot design as opposed to the 3-slot design of the Founders Edition model.

Of course, the triple-fan Icestorm 2.0 cooling makes up for the slimmer heatsink and the RTX 3090 Trinity runs at acceptable temperatures under load, although it doesn’t offer much in terms of overclocking performance.

As for the design, the card boasts a simple, neutral gray shroud with some RGB on the side, complete with a smooth metal backplate. Granted, it’s not as original or as standout as the Founders Edition but it’s an effective design that will help the card fit in most builds.

Up next, we have a graphics card that puts a little more stock in performance than aesthetics. It comes from another recognizable manufacturer — the ASUS TUF Gaming GeForce RTX 3090 OC Edition.

Next to Asus’ more popular RoG lineup, TUF cards are usually there to fill the role of the “budget” option. As mentioned above, the TUF RTX 3090 doesn’t offer much in terms of visual appeal, but it doesn’t make any sacrifices when it comes to cooling and, by extension, performance.

Thanks to the thicker heatsink and triple Axial-tech fans, the TUF RTX 3090 can hit higher clock speeds than both the Founders Edition and the above Zotac model. This makes it a great pick for those who place performance before aesthetics, as you’re unlikely to get better numbers with any other RTX 3090 model that comes with MSRP pricing.

However, those who do care about the aesthetics of their $1500 graphics card might not find this model too appealing. After all, it looks more like your average mid-range gaming card rather than the Titan-level monstrosity that the RTX 3090 is. 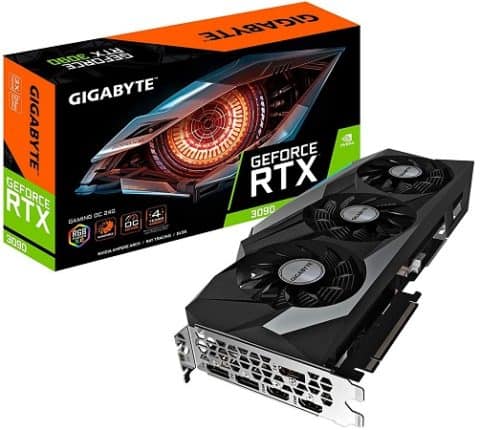 For our next entry, we have the Gigabyte GeForce RTX 3090 Gaming OC, a card coming from a company known for their well-rounded and balanced graphics cards. As you might expect, the RTX 3090 is not an exception.

Much like the Asus TUF RTX 3090 model listed above, this card offers good overclocking performance and quiet, efficient cooling. However, it also boasts a more aesthetically appealing exterior, complete with a high-quality shroud, a sleek metal backplate, and some RGB on the side of the card, similar to the Zotac model.

So, this Gigabyte RTX 3090 Gaming OC has all of the important bases covered — good base performance, good overclocking, good cooling, and good design. On top of all that, the card even comes with a 4-year warranty, which is always welcome.

It also costs a bit more than the MSRP, though if you’re already spending $1500 on a graphics card, an extra $80 probably won’t be too big of an issue if you really care about aesthetics.

Finally, we have yet another card from a highly recognizable company, and it’s the MSI Gaming GeForce RTX 3090 Gaming X Trio. The Gaming X Trio cards have been very good premium picks these last few years, and that definitely hasn’t changed in 2022.

With the latest RTX 30 series GPUs, MSI has tweaked the design a bit, altering the shroud slightly and toning down the RGB. However, the card still looks great, and the overall design philosophy is intact, so it’s neither a step down nor a step up, at least as far as we’re concerned.

On the performance front, the RTX 3090 Gaming X Trio fares extremely well and is easily the best performing card on the list at the moment. It’s capable of hitting impressive clock speeds but it is also equipped with excellent cooling, as it is highly efficient and also generates relatively little noise.

All in all, the RTX 3090 Gaming X Trio is a great card for those who want to squeeze more performance out of this GPU than what some of the cheaper variants can manage. It’s a fast, good-looking card, and those who are willing to add an extra $90 on top of the already hefty $1500 price tag surely won’t regret buying it.

The Nvidia GeForce RTX 3090 is an absolute beast of a GPU. After all, we’ve already mentioned in the introduction that it is the most powerful consumer GPU currently on the market. But does that make it worth the massive expense?

Now, this kind of memory really isn’t necessary for modern games, but it can be extremely useful for some memory-hungry professional applications. That’s why we mentioned in the introduction that the RTX 3090 is more appealing as a professional GPU rather than one intended for gaming.

That said, unless you really have cash to burn, the RTX 3080 would offer much better value for a gaming PC, and you can see our selection of the best RTX 3080 models here.

Now that you’ve seen the best RTX 3090 graphics cards, which of the ones listed here should you buy?

Well, the Asus TUF RTX 3090 definitely offers the best value for your money, as it packs great cooling and offers better performance than most other $1500 variants currently on the market.

On the other hand, if you’re willing to spend a bit more, the MSI RTX 3090 Gaming X Trio is the best pick overall, as it simply has it all: efficient cooling, good overclocking performance, and a more appealing exterior design.

Of course, any of the cards listed here would prove to be a good pick, provided that you keep the card’s capabilities and your requirements in mind.

We’ll be updating this list as new cards come out, so if you’re not getting your RTX 3090 immediately, be sure to check back again later. 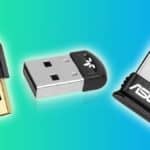