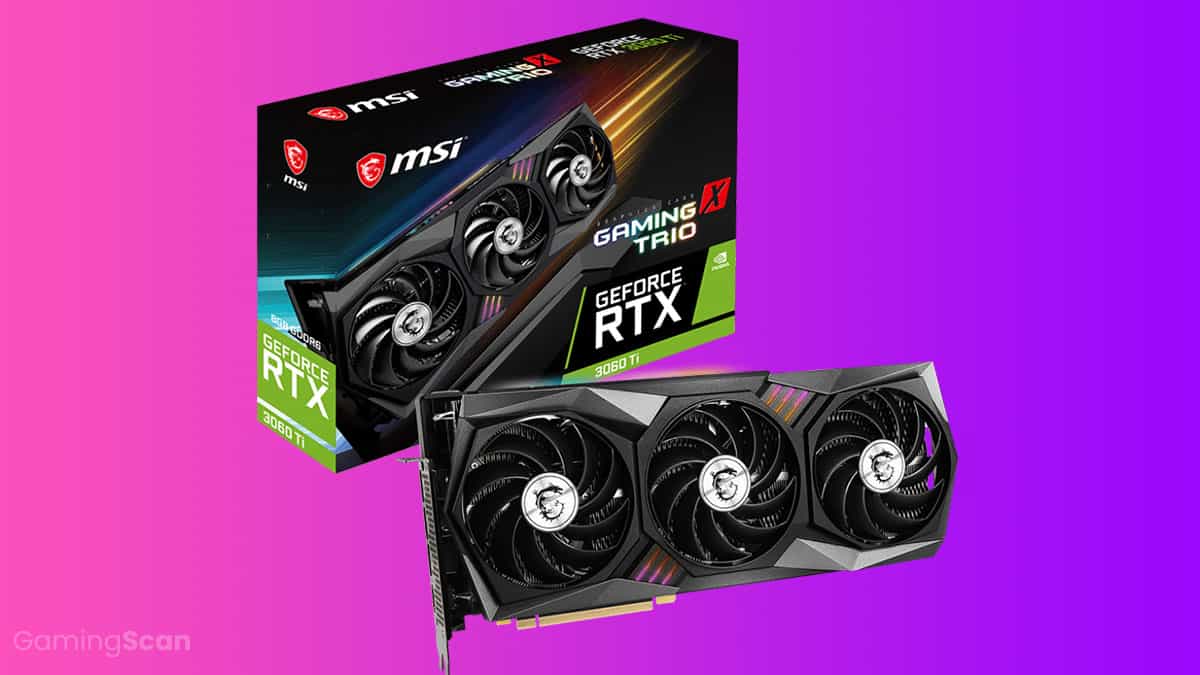 Nvidia has recently taken some big steps forward with their Ampere-based RTX 3000 series graphics cards that easily put their Turing-based predecessors to shame. With improved real-time ray tracing and enhanced performance, the RTX 3000 lineup consists of a number of highly appealing models.

Among them is the Nvidia GeForce RTX 3060 Ti, a GPU that is currently the undisputed king of the mid-range, as they hold their own surprisingly well when put up against AMD’s latest RX 6000 series GPUs.

In any case, the RTX 3060 Ti truly offers great value for your money, as it can outperform even the RTX 2080 Super, and at a significantly lower price point.

In this article, we’ll be going over the best RTX 3060 Ti graphics cards that you can buy at the moment. So, if you’re thinking about upgrading to this particular GPU, read on, as you’re bound to find a good pick for your needs! 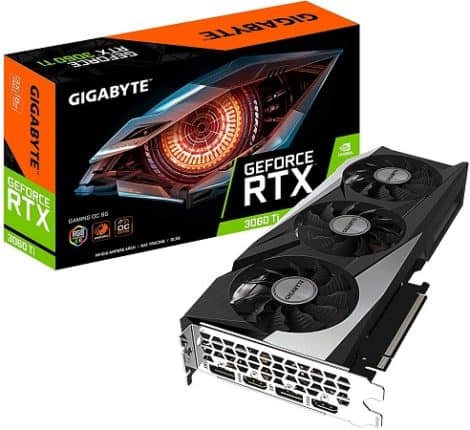 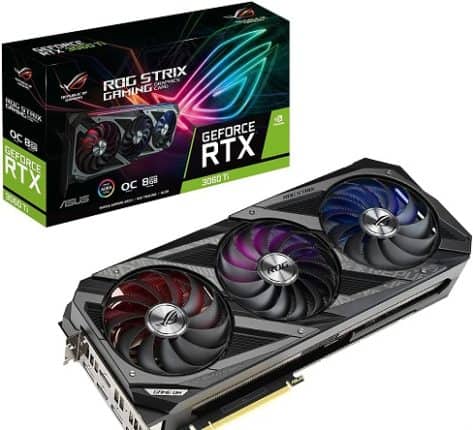 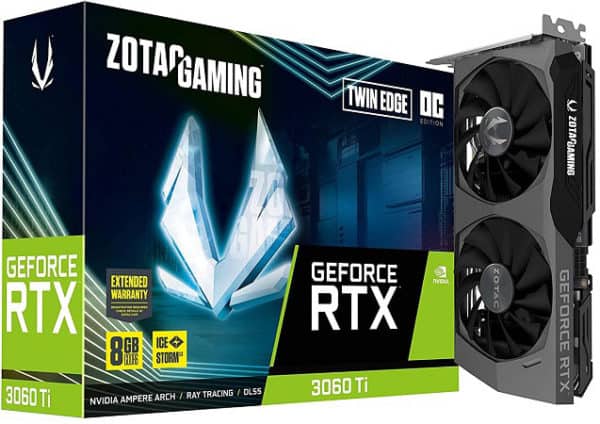 The first card on the list comes from Zotac, a company that has been the go-to choice for those who are building small form factor gaming PCs, as they are known for their excellent compact GPUs. And while the Zotac RTX 3060 Ti Twin Edge OC is far from being the smallest graphics card on the market, it definitely is one of the smallest RTX 3060 Ti models that you can get.

Design-wise, the card isn’t all that impressive – it boasts a nice-looking backplate but the shroud is a simple gray color with no standout details. Granted, aesthetics are highly subjective, so some might like the clean exterior while others would simply find it bland and somewhat cheap.

If you’re concerned with performance, this card offers all the frames that you’d ordinarily get out of an RTX 3060 Ti, as the cooling is quite efficient and keeps the card running at decent temperatures even under heavy load, although it does run hotter than the competition. Moreover, the fans can get quite loud, so keep that in mind if noise is a big drawback for you.

Overall, the Zotac RTX 3060 Ti Twin Edge OC is a solid pick for those who aren’t looking to spend more than necessary on a new graphics card and who would prefer having a more compact model for a smaller case.

Up next, we have another viable solution coming from Gigabyte – the Gigabyte RTX 3060 Ti Gaming OC. In contrast to the Zotac model that we’ve taken a look at above, it is a bulkier triple-fan card, although it does strike a solid balance between value and performance, as Gigabyte’s cards commonly do.

The design has been updated from the relatively simple black shrouds previously seen in the Gigabyte Gaming-series cards. Now, it comes with a black-and-white exterior and a metallic backplate, so the contrast does make the card appear much sleeker.

Regarding how the card performs, the cooling is quite efficient, and the GPU sits at comfortable temperatures when under heavy load. Plus, the triple-fan cooling makes it quieter, too. Granted, the fans are on the loud side here as well, although not as much as with the Zotac RTX 3060 Ti Twin Edge OC.

All in all, the Gigabyte RTX 3060 Ti Gaming OC is a solid RTX 3060 Ti for those who are looking for a well-balanced graphics card that both performs and looks good, all the while it doesn’t go too far above the MSRP.

Speaking of good-looking graphics cards, the next model we have lined up comes from one of the best-known brands in the industry, and it features a long-overdue redesign, too – the Asus ROG Strix RTX 3060 Ti Gaming OC Edition!

Finally, Asus has updated the old Strix design that they’d stuck with since the Pascal-based GeForce 10-series models, and the new design is quite something. The shroud looks modern, solid, and expensive, and the excellent implementation of high-quality RGB lighting only contributes to the new aesthetic.

Now, of course, Asus ROG Strix cards are also known for their excellent performance, and this one is no exception. The GPU runs cool and the three fans are very quiet, so there are no negatives there. And while the power limit does make overclocking a bit more complicated, the ROG Strix RTX 3060 Ti can hit some impressive clock speeds and fares better in this respect than most of the competing models do.

At the end of the day, as you might expect, the main drawback to this card—as with virtually every other ROG Strix model—is the pricing. With a $500 retail price, which is equal to the MSRP of the RTX 3070, this card could be a bit of a dubious investment. 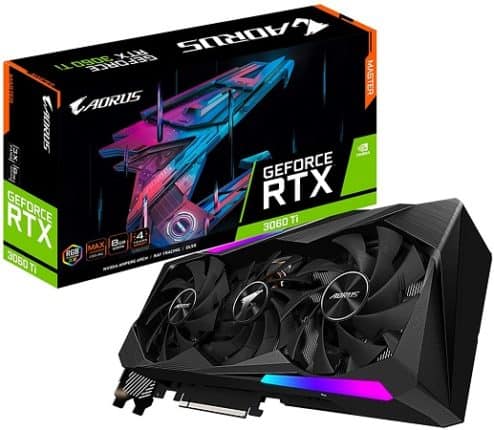 If there is a brand that can give Asus’ ROG Strix lineup a run for its money when the aesthetics are concerned, it is most definitely Gigabyte’s Aorus series. And so, the Gigabyte Aorus RTX 3060 Ti Master does exactly that.

If we had to describe the different design philosophies that Asus and Gigabyte are applying to their new Strix and Aorus cards, the former could best be described as “sleek“ whereas the latter can be described as “bold“.

With its bulky triple-slot design, black exterior, and large RGB zones, complete with a small LCD screen on the side, the Aorus RTX 3060 Ti Master stands out among the competition, and many are bound to appreciate this design approach. The screen can display the GPU temperature, or it can display custom images and gifs, so it’s definitely an interesting addition.

As you’d expect, there is not much to say about the card’s performance, as it features high-quality cooling and it can support a solid overclock, despite the fact that it uses one 8-pin and one 6-pin connector, unlike other serious RTX 3060 Ti models such as the ROG Strix that feature two 8-pin connectors instead.

Ultimately, while this card’s $490 retail price doesn’t quite match the hefty price tag of its ROG Strix counterpart, it’s obviously quite close, so it will mainly appeal to enthusiasts who want a high-quality card but can’t afford any of the pricier RTX 3070 models. 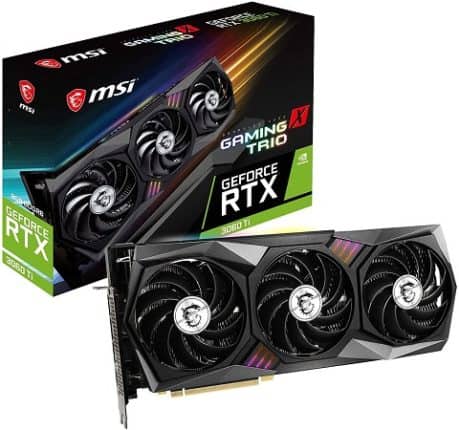 No graphics card list would be complete without at least one entry from MSI, and so, the next entry is the MSI RTX 3060 Ti Gaming X Trio.

When it comes to the card’s appearance, MSI has updated the design for the RTX 3000-series cards, toning down the RGB and giving them a sleeker shroud. While we prefer the look of the RTX 2000 models, there’s no denying that the new cards look great, too.

As for the performance, it’s one of the faster cards on the market and the overclocking performance falls just short of the Asus ROG Strix RTX 3060 Ti. Moreover, while the GPU can run a bit hotter than the competition, the fans are remarkably quiet even when the card is under heavy load.

Overall, the Gaming X Trio is another premium-quality card that carries a price premium as well. At $470, it’s not quite as expensive as the ROG Strix or the Aorus variants, but it’s still more than many would be willing to spend on a graphics card.

So, now that we’ve gone over some of the best RTX 3060 Ti models currently on the market, which of them is the very best one?

Well, as always, preferences and budget constraints differ from user to user, so there is no one-size-fits-all solution here. As such, we’ve picked three cards.

First, for those who are working with a limited budget and don’t want to overspend, the ZOTAC RTX 3060 Ti TWIN EDGE OC would probably be the best choice. It’s affordable and performs well, considering the dual-fan cooling and a relatively slim heatsink. Plus, as mentioned above, it’s one of the most compact models available, so it’s great for those who have their sights set on a smaller case.

Second, for those who have money to spare, there’s the Asus ROG Strix RTX 3060 Ti Gaming OC Edition. It is easily the best air-cooled RTX 3060 Ti currently on the market, and the new design is quite something to look at. Needless to say, it is an enthusiast-grade card through and through.

Finally, for those who want to get good value for their money, the Gigabyte RTX 3060 Ti GAMING OC would probably be the best choice, as it strikes a good balance between performance and pricing. Plus, the new design also looks much better than what we’ve seen in the earlier Gigabyte cards in this price range, and this is always worth noting in the age of translucent computer cases.

And so, that would be it for this buying guide.

We’re sure that you’ve found it helpful, but keep in mind that the exact prices of the cards listed here are likely to fluctuate due to the ongoing supply issues. As soon as the market situation stabilizes, we’ll be sure to update this guide with some more great picks! 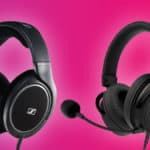