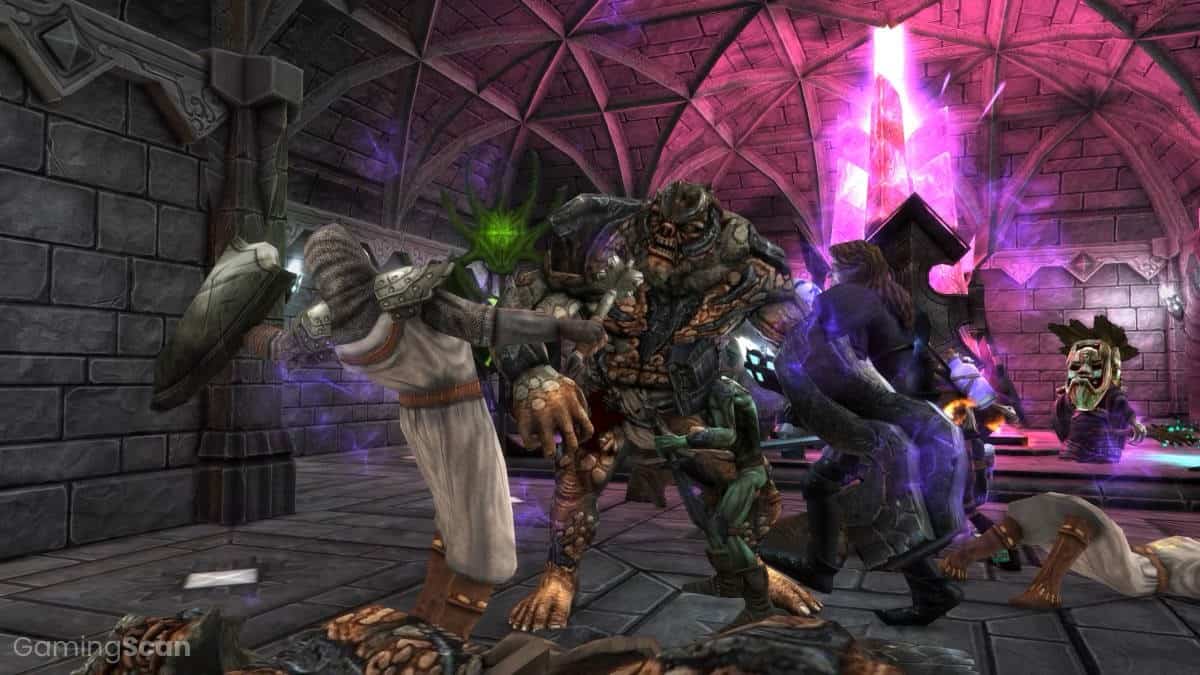 One of the most common video game fantasies as a player is being able to influence those around you, whether that means doing NPCs’ dirty work to get in their good graces or simply bending them to your will.

God games tend to skew towards the second option, with players assigned divine-like powers that let them control characters, systems and essentially manipulate the game world on a large scale.

Reus has you controlling powerful giants with special powers that allow them to physically reshape the planet and create mountains, oceans, forests, and other environments.

Doing so enriches the planet with plants, minerals, and wildlife, in turn making the world habitable for humans and their various virtues and vices.

What sets Reus apart from other god games is that instead of placing the burden of morality on the player’s shoulders, the game presents outcomes as a consequence of mankind’s free will.

If you go out of your way to provide as many resources and opportunities for humans, they can choose to improve themselves or give into greed and corruption.

If ruling over a single colony isn’t enough for you, why not kick things up a notch by building an entire civilization that spans multiple planets.

The Universim sees you developing humanity from humble beginnings to an advanced society with cutting-edge technology with limitless potential.

Players can influence humans’ decisions and punish them whenever they want using various godly abilities, including creating natural disasters.

The game draws much of its inspiration from classic god games like Black & White, so if you’ve been looking for something to scratch that itch, look no further.

Although it may not be the best-looking or even most demanding god game on PC, Dwarf Fortress is a complex beast with an exhaustive number of mechanics to master.

Once you make it past the now 15-year-old game’s outdated UI and graphics and get a sense of its various systems, things eventually start to click.

Considering how long Dwarf Fortress has been around, you’ll find no shortage of guides and resources to help you get started, and the community is very welcoming of new players.

One of the classic god game series from the early 2000s, Black & White casts you as a newborn deity with a giant, monstrous pet of their choosing:  Monkey, Lion, Wolf, Cow, and Tiger.

From there, you’re introduced to your new loyal subjects, villagers in need of something to worship; as its title suggests, Black & White is all about good and evil and which end of the spectrum you land on.

The severity of your divine powers is dependent on which animal you pick, with some having a semblance of balance and others feeling downright broken.

While it’s possible to go through the whole game without making a single “evil” decision, such as destroying your worshippers’ harvest or flinging their puny bodies into the ocean, the temptation is always there.

You can’t talk about god games without mentioning Peter Molyneux, one of the most iconic game designers and a driving force behind the genre’s creation.

Along with his team at Bullfrog Productions, he developed Populous, a one-of-a-kind strategy game centered on guiding human followers and stomping out your godly competition.

Over the years, the series continued to broaden its scope, with the third (and final) entry Populous: The Beginning, taking on more RTS elements and (at the time) impressive-looking 3D graphics.

In it, you play as a female shaman tasked with leading a small tribe of believers as they compete with rival tribes throughout space with the goal of reigning supreme.

RimWorld takes the best bits of base-building, survival, and strategy games and combines them with its unique AI-driven story generator to create some hilariously morbid and downright ridiculous scenarios.

In it, you play as an all-seeing force tasked with caring for a colony of space explorers after they crash-land on a strange new planet.

Your colonists possess physical and emotional needs that have to be met for your community to flourish, including providing enough housing and expanding when necessary.

It’s not the most challenging god game by any means but is full of surprises and weird moments that will keep you engaged.

If you enjoy god games with city builder elements, then you’ll probably have fun deciding the fate of your residents in Cities: Skylines.

The game assigns you to the role of Mayor before asking you to construct your very own metropolis from the ground up using intuitive tools and features that still allow for more advanced playstyles.

With control over things like education, natural resources, policing, healthcare, and more, you can create a perfect little utopian society or bring about a modern-day apocalypse.

The true joy of playing Cities: Skyline comes from feeling like a virtual god with the ability to bend every NPC to your will; whether you use those powers for good or evil is ultimately up to you.

One of our favorite weird simulation games is House Flipper, in which players fix up condemned homes and flip them on the market for a profit.

The Tenants is another home renovation game that delivers on a similar premise, only from an all-seeing and all-knowing landlord’s perspective.

Your job is to spruce up apartments and match them with the best tenants that are least likely to cause you a world of headaches down the road.

The game gives you a lot of flexibility when it comes to choosing which clients to take on and how you react to unexpected challenges such as dealing with annoying neighbors, evicting difficult tenants, and more.

War for the Overworld

War for the Overworld is a dungeon management simulation game primarily inspired by the Dungeon Keeper series.

It employs the best parts of both RTS and god games with modern management gameplay that streamlines the entire process.

Related:Best Games Where You Play As The Bad Guy 2022

Players combine 60+ rooms, spells, potions, rituals, and traps to create dangerous dungeons capable of defeating the most courageous of heroes.

The game also boasts a map editor complete with scripting support and the option to save your creations for future use or share with others via Steam Workshop.

Few god games are as iconic as Spore, the hit life-sim-meets-RTS developed by Maxis and published by EA in 2008.

In it, players are given the tools to develop unique species however they see fit, starting with microscopic organisms through to intelligent and social creatures with distinct physiology and traits.

Eventually, the game broadens its scope to include interstellar exploration and spacefaring, resulting in some of the best open-ended gameplay the genre has to offer.

It’s the type of game you can play again and again for years and still run into something new due to Spore’s use of procedural generation and well-designed systems.

Continuing with the theme of autonomy-based god games, Ecosystem is an ecologically sound life sim that has you growing your own underwater sandbox.

The game uses simulated evolution based on the laws of ecology as a framework for its gameplay systems, in which the player selects between various flora and fauna to place in physically simulated oceans.

It features pre-made fish models as well as an in-game creation tool that lets you dream up all sorts of marine monstrosities complete with nervous systems and brains.

Over time, species will either survive or have their numbers dwindle depending on their environment’s viability, determined by the player’s actions.

The majority of god games spend most of their time exploring heady concepts like free will, good versus evil, and the nature of life; this leaves little to no room for earthly pleasures such as golf.

GolfTopia tasks you with designing, planning, building, and managing your own golf course from the ground up with the goal of keeping guests happy and turning a profit.

Players are made privy to their golfers’ inner thoughts, providing vital information that can then be used to improve the course’s amenities and make it more appealing.

This is done with help from an army of robot worker drones that can be assigned to complete different tasks and keep your golf course running smoothly.

Opposite of Spore on the other end of the god game spectrum, you have Simmiland, a 2D sim game that has you indirectly influencing civilization using world-altering playing cards.

Each card you draw has unique uses depending on the biome it’s played on; for example, using a plant card on a grass biome will produce a wheat plant.

Playing cards cost you “faith,” which is earned anytime your human followers pray to you or have their wishes fulfilled, resulting in a satisfying give and take gameplay loop.

Simmiland features two game modes: Normal mode, which assigns you a limited deck with a clear beginning and end, and Endless mode with infinite cards and achievements locked.

The game puts you in charge of guiding a tribesman and his people by harnessing special totem powers that allow you to control nature itself.

You’ll explore distant lands searching for lost tribes and magical amulets while waging war with anyone who stands in your peoples’ way.

Inspired by genre heavy-hitters like Populus, Reprisal Universe includes over 30 planets, 180 planets, and 3 enemy tribes to conquer throughout your adventure.

Each one is comprised of four races: humans, orcs, elves, and dwarves, with each assigned race-specific traits that affect their behavior.

Over time, different races will establish kingdoms, seek out new lands, and battle with each other for control.

As a divine ruler, it’s up to you to decide how you’ll intervene, if at all, and deliver justice via natural disasters and attacks from cataclysmic beasts. 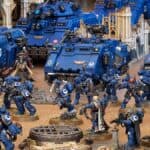