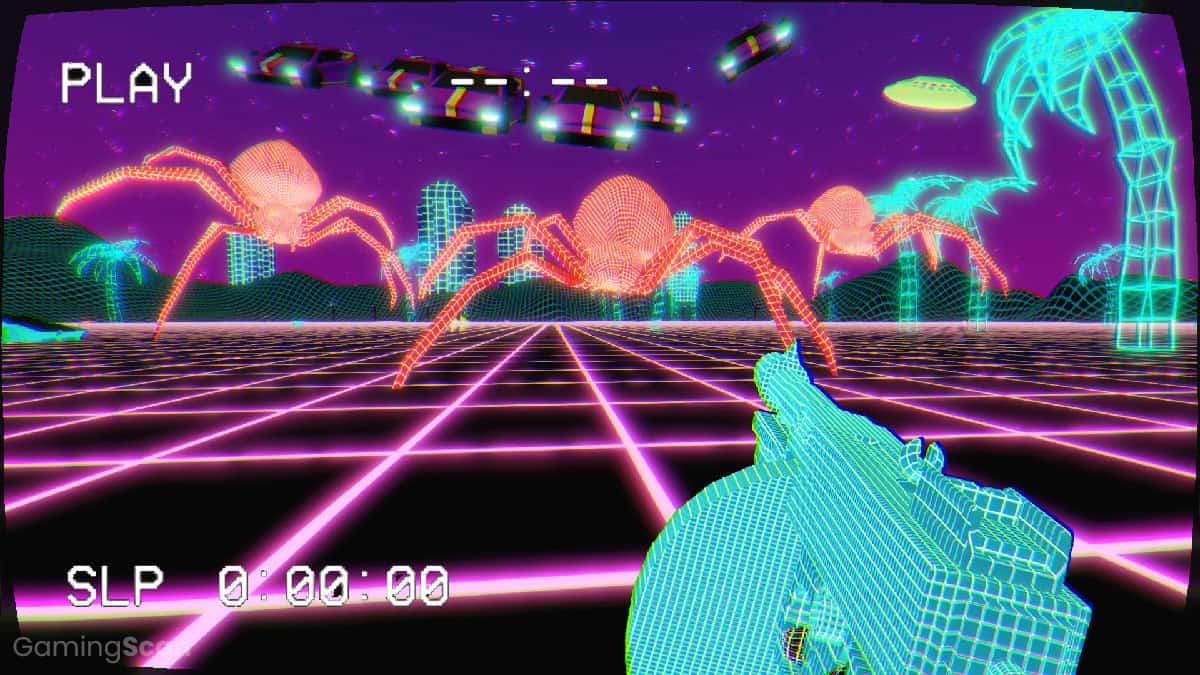 Vaporwave is one is of the most recognizable internet subcultures and stands out for its nostalgic take on 1990s web design, pop culture, and consumer capitalism.

Having evolved from chillwave, synthwave, and hypnagogic pop, vaporwave rose in popularity during the early 2010s and continues to spread its influence throughout music, movies, and video games.

For more gaming recommendations, make sure to check out our growing library of curated lists, and comment below with your top vaporwave games to play in 2023!

To get started, our first vaporwave game suggestion is Arcade Paradise, a management simulator that sees you running your own laundromat/arcade business.

Set during one uneventful summer, it sees you taking over the family business and slowly converting the dull laundromat into a thriving arcade with over 35 fully playable retro machines.

When you’re not busy washing clothes, you can slip away to the back office computer to listen to music, browse websites, and shop online via a dial-up connection.

Next up is SAD RPG, an experimental turn-based role-playing game about overcoming social anxiety in a modern-day, vaporwave-inspired open world.

The only way to describe this game is to say it’s weird, colorful, and full of surprising moments that do a great at visualizing what it’s like to deal with social anxiety disorder on a daily basis.

While the subject matter can be sensitive for some, SAD RPG balances this out with vibrant neon 3D environments and surrealistic imagery.

No Thing comes from the same creator as SAD RPG, Evil Indie Games, and transports players to the year 1994 when a totalitarian regime has come into power.

Players take on the role of an office clerk who is sent to deliver an important message to the “Queen of Ice,” which is played out across a series of surreal action sequences.

This game is even weirder than SAD RPG while offering simple controls, captivating music, and hypnotic minimalist visuals that will appeal to any vaporwave fan.

Moving right along, Sludge Life is a first-person open-world platformer that casts you as an up-and-coming graffiti tagger named Ghost.

The game has a great sense of humor that’s further complemented by trippy visuals, weird mini-games, and a vaporwave-inspired PC interface.

In Rampage Miami, you play as a criminal that decides to take up arms and kill anyone that gets in their way while shooting for the perfect score.

To get there, you’ll have to blow up bad guys using an assortment of guns, land, and ground vehicles scattered across a retro-style open world powered by synthwave music and neon lights.

If you can get past Cruelty Squad’s off-putting art style, you’ll be rewarded with a fun immersive sim that offers satisfying gunplay and traversal mechanics.

In terms of gameplay, it posits itself as a “power fantasy simulator” about a contract killer employed by a shady corporation to carry out hit jobs using various weapons and tools.

There’s an absurd amount of freedom in deciding where to go, who to kill, and what mysteries to unravel throughout Cruelty Squad’s bizarre, biopunk-vaporwave open world.

A personal favorite, Evo\Wave is a free 3D vaporwave platformer that has you taking on the role of an A.I. tasked with saving a virtual world.

The game is spread out across multiple platforming levels with distinct graphical styles that draw inspiration from different eras throughout video game history.

As players progress and gather resources, they’re able to unlock abilities that allow them to reach new areas and discover more secrets.

In Hypnospace Outlaw, you play as an internet detective assigned to monitor the World Wide Web for criminals that are pirating music, hacking websites, and spreading viruses.

To hunt down offenders, most of your time is spent sifting through various web pages littered with low-red gifs, lines of flashing text, and other web design tropes of the 1990s.

While fulfilling your role can feel tedious at times, the game rewards you for your hard work with virtual currency to spend on vaporwave music, wallpapers, and other goodies.

Next up is The Immaculate Drag, a noir first-person walking sim about a washed-up writer searching for closure while smoking cigarettes and wandering around his neighborhood.

Billed as a brief experience that takes players on a “melancholic journey through themes of depression, nostalgia, mortality, and the meaning of creativity,” the game is great for those introspective nights.

Furthermore, it features branching dialogue with an eccentric cast of characters and an emotionally-compelling score that draws inspiration from vaporwave, retrowave, lo-fi hip hop, jazz, and more.

In it, players embark on a surreal vacation spanning multiple vignettes with psychedelic visuals and stimulating audio designed to elicit an emotional response.

As with most vaporwave experiences, it’s less focused on completing a specific goal using traditional gameplay mechanics but rather on immersing yourself in atmospheric scenes with cool imagery.

Fiction #F3F is another experimental title created by Colorfiction that offers casual walking sim gameplay framed as an exploration-driven adventure.

Included is a collection of five atmospheric experiences with wildly different art styles and atmospheres designed to leave players in a trance-like state.

Each one has a unique ambient setting that ranges from a moody train car to a sun-bleached desert, monochromatic starscape, unfathomable void, and other vaporwave-adjacent concepts.

It leans heavily into the vaporwave aesthetic and focuses on themes relating to teen angst, the meaning of life, and the finality of death while exploring experimental gameplay mechanics.

This is all complemented by a fantastic soundtrack that will keep you company as you explore Griptape Backbone’s bizarre, heavily stylized open world.

In it, you take on the role of a cyber hero tasked with escaping a hostile retrowave world before they end up trapped inside forever.

To make it out, you’ll have to use a laser gun and grappling hook to scale and ride walls all while fighting enemies and pulling off cool parkour maneuvers across vibrant environments.

The longer you can manage to keep your car on the road, the more cash you’ll earn for unlocking new upgrades and cool-looking vehicles to add to your collection.

Boasting a 45-track synthwave soundtrack, 4 unique game modes, and 5 universes to explore, Retrowave is a great way to chill out with some vaporwave-inspired racing.

Slipstream is another arcade-style racing game with a vaporwave aesthetic that draws influence from early 1990s racers with pseudo-3D graphics.

To this point, it has an authentic retro look and feel that’s easy to lose yourself in as you drift across exotic tracks with synthpop and jazz fusion music playing on a loop in the background.

It includes 20 unique racing tracks set in various cities, deserts, forests, mountains, and beaches, as well as a handful of familiar modes for all manner of arcade racer fans.

Our next suggestion is Aesthetic Arena, a visually-striking first-person shooter that sees you trying to survive against flying cars and giant spiders in a neon desert.

Armed with neon-colored guns, limited health and ammo, and game-changing power-ups, you’ll have to hold out against mobs of enemies that become harder with each wave.

The game has one of the trippiest atmospheres of all titles on this list and does an excellent job at combining vaporwave visuals with action-driven gameplay.

If you’re looking for another FPS with a cool aesthetic, Vapormaze is a great option that layers on roguelite progression and looter shooter mechanics.

In it, you find yourself trapped in the titular “Vapormaze,” a never-ending labyrinth of lies whose only escape comes from finding out the truth behind its design.

This requires you to shoot robots and avoid spikes while you expand your arsenal of weapons, upgrades, and bombs to explode the system and make it out once and for all.

Tanuki Sunset is an arcade skateboarding game that casts you as a talented board-shredding raccoon that enjoys cruising down highways.

Each run sees you maneuvering through narrow tracks set in neon-drenched city, mountain, and beach environments with vaporwave elements.

Throughout the game, players can unlock new outfits and cosmetics to give their raccoon and longboard some style as they try to get the top score in each level.

Reminiscent of games like VVVVVV, Aesthetic Melody is a challenging 2D platformer with gravity-flipping mechanics designed to mess with your head.

In it, players must avoid traps and other obstacles while inverting gravity to collect keys and advance to the next level.

Each stage is set against captivating backgrounds with mesmerizing visual effects and vaporwave music that’s sure to nestle its way deep into your soul and stay there forever. 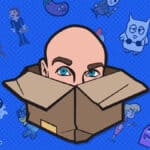